Infected larvae stops feeding, does not respond to external stimuli and body becomes darker 4. Studies on biochemical changes during various stress like coldness and pebrine disease in Anthereae mylitta has been carried out 5, 6.

Haemocytes are the important components of the insect immune system. Cellular responses are direct interactions between haemocytes and non-self materials. The interactions results in responses like nodulation, phagocytosis and encapsulation 7. In insects several types of haemocytes are observed in the haemolymph with various functions like mechanization and immobilization of invading organism by encapsulation and phagocytosis, wound repair and coagulation 8. Studies on the susceptibility of three eco-races of Anthereae mylitta drury against AmCPV reported that ecoraces showing reduced number of haemocytes are tolerant to pathogen 9. Recently, some work has been carried out on the haemocytes and protein changes in Tasar silkworm and reported that total haemocyte counts indicate the susceptibility status of insect 10. Increase in the number of haemocytes was recorded in Anthereae mylitta drury infected with Nosema species 11.

Silkworm growth is correlated with the synthesis of carbohydrates, proteins, amino acids and enzymes like proteases, glutamate dehydrogenases and aminotransferases and changes in these biochemical constituents are correlated with the events of histogenesis and histolysis 12. Infection causes many biochemical changes in the silkworm larvae with a change in metabolic pathways to defend against pathogen invasion 13. Nosema infection in silkworm causes a decrease in enzyme activity 14.

Disease control in sericulture can be affected by application of natural and synthetic chemicals 15. Information on suitable chemicals required to control bacterial infection in Anthereae mylitta drury is scanty. Hence, the present work was carried out to understand the efficient concentration of sodium hypochlorite in controlling bacterial infection in Anthereae mylitta drury (Daba TV) based on mortality rate, Total haemocyte count, Aspartate transaminase, Alanine transaminase and Protein carbonyl content.

Third instar larvae of Daba TV with bacterial infection (chain type excreta) were collected during first crop from the forest patches of Jakaram, Warangal, Telangana, India. Isolation of bacteria was done by dissecting the hind gut of infected larvae in distilled water, homogenisation and followed by serial dilution agar plating method 16. Isolated bacteria were cultured in liquid broth made up of beef extract and peptone and stored at-20°C for further research.

Fifth in star larvae were selected from all the groups separately. Haemolymph was collected in Eppendorf tubes of 1.5ml by bending the thoracic legs. Phenyl thiourea was mixed with collected haemolymph to prevent melanisation 17. Samples were centrifuged at 20000rpm for 10 min. The supernatant was used to estimate Aspartate transaminase (AST) and Alanine transaminase (ALT) according to 18 whereas Protein carbonyl content by 19. For haemocyte estimation, haemolymph was drawn into a Thoma white blood cell pipette up to 0.5 mark and diluted up to the 11 mark with Tauber–yeager fluid 20. The pipette was then shaken for several minutes and the first three drops were discarded. A double line with improved Neubauer ruling Haemocytometer was filled with diluted haemolymph and the haemocytes counted in its four corner and one central (1mm2) squares. The number of circulating haemocytes per cubic millimeter was calculated using the following formula 21.

Each assay was replicated 3 times. Values were expressed as mean ± SE of replication and Student’s t-test was applied to locate significant (P <0.05) differences between supplemented and control larvae. Critical differences (CD5%) was analysed by Tukeys post hoc procedure 22.

CD: Critical difference. All the values are the mean values of three replications

CD: Critical difference. All the values are the mean values of three replications

S3 (0.1%) batch larvae than control (T1) (8.64µg Pyruvate/ mL SE= ±0.58). Especially 0.05% sodium hypochlorite concentration batch larvae have shown a tremendous increase of 106.2% over the control whereas 0.01%concentration by 30.2% and 0.1concentration by 21.75% respectively. Increase in enzyme activity can be correlated with the stimulation of enzymes which influences the biochemical components of haemolymph of silkworm. Aspartate aminotransferase activity is a sign for entrance of amino acids to glucogenesis 25. The increase in activity of aminotransferases decreases the amino acids because of their conversion to pyruvate in turn increases the supply of precursors to Krebs cycle 26. 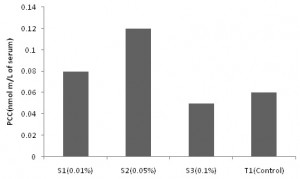 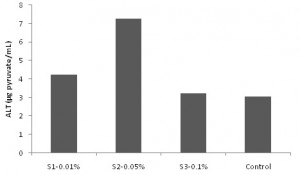 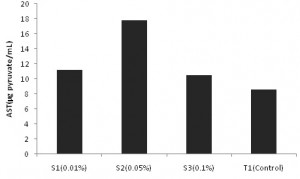 CONCLUSION: Thus in conclusion 0.05% sodium hypochlorite is efficient in reducing the mortality rate of Anthereae mylitta drury by bacterial infections. It also reduced the haemocyte count but significantly increased the protein carbonyl components and activities of alanine aminotransferases and aspartate aminotransferases.

ACKNOWLEDGEMENTS: The author, Dr. Lakshmi Marepally would like to thank UGC for providing financial assistance in the form of Postdoctoral fellowship.