ABSTRACT: Background: Scorpionism is an endemic and highly prevalent public health predicament causing severe cardio or neurotoxic effect. Ayurveda proposes a range of medicinal preparations (internal & external) in the management of Vrishchika Damsha (Scorpion sting). Among them, Hingwadi and Jeerakadi lepa are topical anti-inflammatory medications, and Bilwadi Gutika is a potent vishahara medicine (Alexeterics). Aims: To evaluate the comparative effect of Hingwadi Lepa against Jeerakadi Lepa with Bilwadi Gutika pana in the management of manda vrishchika damsha (mild scorpion sting). Methods: The present study adopted an open labelled two armed clinical trial of before and after the pilot study. It was conducted at a tertiary Ayurveda center with 30 subjects satisfying inclusion and diagnostic criteria. They were selected by convenience sampling method and divided randomly into two groups. Group I received Hingwadi lepa, and Group II was given Jeerakadi Lepa twice daily & Bilwadi Gutika pana (1gm) t.i.d. was administered orally in both groups for 7 days. Standard scoring of cardinal symptoms was used to measure the efficacy of treatment before and after treatment. Statistical analysis was done within the group by using student’s paired t-test and in between the groups by using an unpaired t-test. Results: The study showed highly significant improvement within the group in reducing the three cardinal symptoms with P<0.001. A significant result was obtained between the group with P<0.05. Conclusion: Hingwadi lepa is more effective when compared to Jeerakadi Lepa along with Bilwadi Gutika pana in mild scorpion sting.

Around 1.5 million scorpions envenoming with 3,250 deaths are reported worldwide annually 2. The scorpion sting is more prevalent and severe in the underdeveloped tropical countries 1. Among 86 species in India, Buthus tamalus, Palamneus gravimanus, and Mesobuthus tamulus (Indian red scorpion) are lethal to humans 3. In costal Karnataka and Kerala, the lethal red scorpion is rarely found, but mild poisonous Heterometrus swammerdami is copious 4.

Though it is not fatal but this scorpion sting can be severe enough to cause local pain, inflammation, oedema, and redness of skin 5. The current treatment strategies for scorpion envenomation comprise anti-venom, and supportive therapies like pain relief, steroid and a postsynaptic alpha-adrenergic blocker 6. But according to the Meta analysis published recently, the use of anti-venom is debatable 7. As the scorpion is heterogeneous, the treatment strategies cannot be generalized. Hence according to the species, its habitat, and range of envenomation, the treatment protocol has to be designed. Owing to this, Agada tantra (the branch of Ayurveda dealing with Toxicology) explains a variety of Vrishchika based on its origin, structure, its sting effect and treatment.  Based on the signs of sting envenomation, Vrishchika damsha is classified into Manda, Madhyama and Teekshna i.e. mild, moderate, and severe, respectively 8. Manda Vrishchika is predominantly black in colour and produces the similar effect of genus Heterometrus scorpion 9. Pain, Burning sensation, and Oedema are its cardinal symptoms.

Ayurveda elucidates treatment protocol under the broad heading of Vrishchika damsha chikitsa aiming at vedanasthapana (analgesic), Vishaghna (anti poisonous), and Shophahara (anti inflammation) 10. According to the degree of poison, multitude of treatment strategies have been enumerated 11. Variety of herbo mineral preparations have been incorporated internally as well as externally based on the symptoms 12. Hingu, Jeeraka, Matulunga and Ghrita are among them. Bilwadi Gutika is one of the Vishahara Agada indicated for scorpion sting 13. Line of management proposes Lepa (topical application) as one of the prime modes, which alleviates the inflammation of local envenomation 14. The prevailing situation is in need of revalidation of the Ayurvedic formulations. Hence two varieties of Lepa yoga, such as Hingwadi Lepa and Jeerakadi Lepa have been selected to compare its effectiveness in the management of Manda Vrishchika Damsha (mild scorpion sting) along with Bilwadi Gutika Pana.

Methodology: Study design: A randomized, open labelled, two-armed clinical trial of before and after pilot study at tertiary Ayurveda center between 2012 and 2014. Total of 30 subjects satisfying inclusion criteria were selected and divided randomly into two groups by convenience sampling method. Group I received Hingwadi Lepa, and Group II was given Jeerakadi Lepa twice daily & Bilwadi gutika pana (1gm) t.i.d. was administered orally in both the groups for 7 days Fig. 1. The ethical clearance was obtained from Institutional Ethics Committee. (IEC No: PAMC/IECC/CT 2012/SY02). 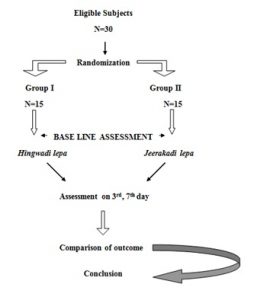 Research Population: 30 consenting (in written form) subjects, diagnosed as per the Clinical features of Scorpion stings, aged between 16 and 65 years of either gender, irrespective of socio-economic and religious background, were included.

Patients with a history of black scorpion sting with duration not more than 48 h presenting with essential symptoms like Pain, Swelling, and burning sensation due to Scorpion sting were included as well. Subjects of red scorpion sting and any post sting systemic involvement with treatment history were excluded.

Subjects having diabetes mellitus, hypertension, and other systemic diseases that interfere with the prognosis and management of scorpion sting were also excluded. In addition, subjects with major systemic, neurocognitive and psychiatric illnesses were excluded.

According to percentage of relief, improvements were defined.

Intervention: Selected subjects were treated in two groups with Hingwadi lepa 15, Jeerakadi lepa 16, and Bilwadi gutika 13 pana 1 t.i.d. for both the group. Ingredients of trial drugs are tabulated in Table 2.

These drugs were collected from institution Pharmacy and were authenticated in the institution Research center. Trial drugs were prepared as per classical method1 5, 17.

Packing and labelling was done in Teaching Pharmacy as per the standard procedure 18. Then it was administered in both groups. Details are tabulated in Table 3.

Statistical Tests Used: The collected data were analyzed using a graph pad in stat software. Demographic data and other relevant information were analyzed with descriptive statistics. Continuous data was expressed in mean +/- standard deviation, and nominal and ordinal data was expressed in percentage. Statistical analysis was done within the group by using student’s paired t-test and in between the groups by using an unpaired t-test. The changes with P value<0.05 were considered as statistically significant.

Results: Total 30 subjects completed the study without any dropout. A majority of the subjects were males aged between 36 to 45 years (63.33%) belonging to lower economic status working as a manual labourer (60%) Table 4.

Eighty percent of subjects were presented with oedema at the site of the sting, while 73.33% of subjects reported moderate, disturbing pain and 50% continuous burning sensation Table 5.

Both the regimen showed significant improvement in the Total leukocytes count as well as in Lymphocyte count (P< 0.05). TLC in Group I was decreased by 9.23%, and in Group II it was found up to 9.64%. Lymphocytes in Group I were reduced by 11.11%, and in group II the reduction was found by 6.54% Table 8.

TABLE 8: EFFECT OF THE THERAPIES ON BLOOD PARAMETERS 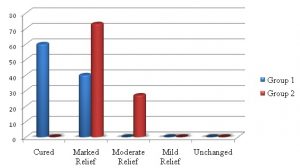 The overall effect shows a significant difference between the two groups Table 9. Concerning the percentage of improvement, the result showed that 60% of subjects got cured after the stipulated period of the treatment in Group I. In Group I 40% of subjects got marked relief, while in group II 73% had marked relief. 27% of group II got moderate relief on 7th day. Here though none of the group showed 100% cure rate, the results obtained by the therapies of group I was more effective which is depicted in Fig. 2.

At the end of the clinical trial, i.e. on seventh day, results were assessed and are discussed compared to a previous study on scorpion sting managed with oral administration of Vilwadi gulika alone 23. Therapeutic combination of Hingwadi lepa and Bilwadi vati showed better result than sole Bilwadi gutika 23 and its combination with Jeerakadi lepa in reducing pain and oedema. The ingredients like Hingu 19, Matulunga 20 in Hingwadi Lepa and Bilwa, Pippali, Kupilu, Haritaki, Tulasi in Bilwadi Gutika 22 possess a potent analgesic property. The combined effect might have yielded a better result. The effectiveness of Bilwadi gutika 23 was better compared to both the regimen in reducing the burning sensation of scorpion sting. Pippali, Haritaki, Tulasi in Bilwadi gutika are anti-inflammatory, antihistaminic, antipyretic 22. However, in this study, all the subjects were completely relieved from the symptom.

The current study showed significant improvement of a few blood parameters. Both trial drugs showed significant improvement in Total Leucocytes count as well as in Lymphocyte count. An increase in the number of Lymphocytes in almost all the subjects suggests an involvement of the immune system against the antigen i.e., scorpion venom. And its reduction after the completion of the treatment shows that the drugs may also possess anti-inflammatory, antihistamine, and immune regulatory action. The previous study also reports effectiveness of Bilwadi gutika on Lymphocytes and Total Leucocytes count 23. Overall effect showed a significant difference between the groups and previous study by Sandeep et al., 23 also reports the same.

Further, implementing the same medicines on larger sample size and or for the longer treatment duration can précis the results. Probable mode of action of Lepa therapy: Infusion of active ingredients of lepa gets absorbed into the hair root followed by Shiramukhand, Swedavahi srotas and passed to the deeper layers 24. This can be understood by percutaneous absorption such as pilosebaceous, trans-follicular absorption. Active principles of medicines in lepa thus get absorbed and enter the bloodstream and remove the pathology. Absorption enhances when applied in lipid form 24. Lepa of saindhava and gritha mainly subside vata, which is dominant in scorpion sting.

CONCLUSION: In the present study, both the drugs, Hingwadi lepa and Jeerakadi lepa along with Bilwadi gutika are highly significant (P<0.001) in reducing the cardinal symptoms viz. Pain, Burning sensation and Swelling. When the results were compared by unpaired t test, it was found that the efficacy of the drugs was comparatively significant (P<0.05). On the Chi Square test, it was found that the efficacy of the drug (a collective measure of chief complaints and lab investigation) was comparatively significant (P<0.05). On account of the percentage of relief, Hingwadi lepa with Bilwadi gutika was more effective in the management of mild scorpion sting than Jeerakadi lepa with Bilwadi gulika. No adverse drug reactions were reported during the study. It is important to replicate this study using larger samples and more rigorous methods.

ACKNOWLEDGEMENT: The author appreciates Papinissery visha chikitsa Kendra, Papinissery, Kannur for all the support provided for the study.

CONFLICTS OF INTEREST: The authors confirm that there is no conflict of interest.

T. K. Sanath *, Shrilata, A. Niranjan and A. K. Muraleedhran