High molecular weights water soluble homopolymer type of acrylamide was  reported to obtain very high viscosity in low concentration, transparency, film forming properties and useful in formation of transdermal gel. The flurbiprofen gels were prepared by using different concentration of polyacrylamide for topical drug delivery with an aim to gradually increase transparency and spreadability. These preparations were further compared with marketed known flurbiprofen gel. Spreadability and consistency of polyacrylamide gel containing flurbiprofen gel (S9) were 6.5g.cm/sec and 5mm as compared to 5.5g.cm/sec and 10mm respectively of known marketed gel, indicating good spreadability nature and consistency of the prepared gel (S9). The transparency nature of prepared batch (S9) was good as compared to the known marketed gel. The percent drug release was 97.85 and 98.84 from S9 and known marketed gel respectively. No irritation was felt in the skin irritation test. Stability studies conducted under accelerated condition was shown satisfactory results. It can be concluded that polyacrylamide gel containing flurbiprofen gel showed good consistency, spreadability, homogeneity and stability and had wider prospect for topical preparations.

INTRODUCTION:Transdermal gel preparations are intended for superficial skin application or to some mucosal surfacesfor local action or skin penetration of medicament or for their soothing or protective action 1.

Gels are typically formed from a liquid phase that has been thickened with other ingredients. The continuous liquid phase allows free diffusion of molecules through the polymers scaffold and hence release might be equivalent to that from a simple solution 2.

NSAID’s nonsteroidal anti-inflammatory drugs are having excellent anti-inflammatory and analgesic activity but NSAID produces GIT ulceration, liver and kidney trouble  produced in case of oral administration. In view to reduce adverse drug reaction associated with oral formulations, we have prepared as transdermal gel.

Procedure of Gel Preparation: About 5g of flurbiprofen was weighed and dissolved in 5g of isopropyl alcohol, to this solution, specified quantity of glycerin or propylene glycol or cocodiethanolamide was added and dissolved (solution A). Weighed quantity of polyacrylamide was added to the 75g of distilled water containing 0.1g of sodium metabisulfide  used as antioxidant and continuously stirred to dissolve the same (solution B). Solution A and B were mixed thoroughly and the final weight was made upto 100g (Table 1).

Precipitation or turbidity occurs in some of the batches (S1, S2, S3, S4, S5 and S6) of polyacrylamide gel containing flurbiprofen which  has been due to the incompatibility in the system due to presence of glycerin or propylene glycol. Hence, these batches were discarded finally and remaining batches (S7, S8 and S9) were considered for further study.

TABLE 2: EACH VALUES OF EVALUATION PARAMETERS OF DEVELOPED GEL AND MARKETED GEL

Spreadability was calculated by the formula:

Where, S = Spreadability; M = Weight tide to upper slide; L = Length of glass slide; T = Time taken to separate the slide completely from each other 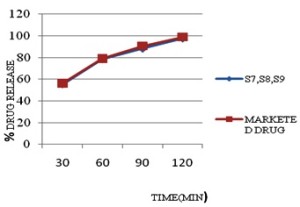 Though, the consistencies of polyacrylamide gel containing flurbiprofen were better as compared with marketed gel. All formulated and marketed gel showed good homogeneity with absence of lumps. The formulated  preparations shown  much clear and transparent when compared to marketed gel. The skin irritation studies of prepared transdermal  gel were carried out on human volunteers and that confirmed the absence of any irritation on the applied surface. During the stability studies the visible appearance was clear and no significant variation in pH which was observed.

Considering the accelerated stability studies and physiochemical parameters, batch S9 was selected for in vitro permeability release studies as well as compared with the marketed gel. In vitro Permeability study shown  that permeation studies of F9 and marketed gel were comparable. It was concluded that polyacrylamide gel containing flurbiprofen (batch S9) produced better spreadability nature  and consistency when compared to marketed flurbiprofen gel. The prepared S9 gel showed good homogeneity, no skin irritation, good stability and in vitro permeability was comparable with known marketed gel. The polyacrylamide forms completely  water washable gel due to its water solubility and has wider prospects to be used as a transdermal drug delivery system.

CONCLUSION: The prepared polymer being macromolecules of very high molecular weight remain unabsorbed on the skin and from our studies it can be concluded that polyacrylamide can be used for various topical dosage form for external application. It has been proved that optimized batch produces the gel with good consistency, homogeneity, spreadabiltity and stability. Hence, the polymer is water soluble; consequently, it forms water washable gel and has been wider prospects to be used as a transdermal drug delivery dosage form.