ABSTRACT:  The electrochemical behavior of Ketamine is studied by employing D.C. Polorography (DCP), Cyclic Voltammetry (CV) and Differential Pulse Polarography (DPP) in universal buffers of pH ranging from 2.0-12.0. The kinetic parameters, such as transfer coefficients, diffusion coefficients and heterogeneous forward rate constant values were evaluated by employing these techniques. Differential Pulse Polarography was employed for the estimation of ketamine in selected pharmaceutical formulations.

INTRODUCTION: Ketamine, (RS)-2-(2-chlorophenyl)-2-(methylamino) cyclohexan-1-one Fig. 1 is a dissociative Anaesthetic agent that has been widely used in clinical practice since 1970. At Sub-anaesthetic doses, ketamine has shown analgesic properties. Ketamine is a NMDA (N-methyl-d-aspartate) receptor antagonist and it blocks the NMDA receptor channel by binding to the phencyclidine receptor 1-6. During the last 15 years, a large number of clinical trials have been published to describe the efficacy of low-dose ketamine in the management of acute post-operative pain in adults 7–12. Several analytical methods like High Performance Liquid Chromatography (HPLC) with Ultra- Violet (UV) or Mass Spectrometry (MS) have been reported in the literature for the analysis of plasma ketamine and norketamine in adults13–19.

The ketamine sample was supplied by Sigma Aldrich, India, and was used without further purification. All the chemicals used were of analytical reagent grade. An appropriate amount of ketamine was dissolved in the required quantity of dimethylformamide (DMF) and accurately diluted with the supporting electrolyte to 10 ml. The solution was deoxygenated by purging with nitrogen gas for 5 minutes, and then the polarogram was recorded.

Ketamine Exhibits only one polarographic wave/peak over the pH range 2.0-12.0 with all the voltammetric techniques. The effect of pH over the range of 2.0 to 12.0 on the voltammograms has been investigated by recording the current voltage curves for Ketamine at a concentration of 2.0 x 10-5 M in universal buffer systems and was concluded that the optimal pH was 4.0. The number of protons participated in the rate determining step of carbonyl group reduction was shown in Scheme 1. This wave/peak is attributed to the reduction of one carbonyl group by the involvement of two-protons and two-electrons. Reduction peak was not obtained for Ketamine in basic medium due to the precipitation of electro active species but the peak was observed in acidic medium at around -0.20 V due to the presence of more number of protons which were facilitated the reduction.

D.C. Polarographic studies: After reduction, the well defined peak has been observed for the Ketamine in universal buffer ranging from 2.0-6.0. It undergoes only one step reduction. A typical D.C. polarogram is presented in Fig.2 from the Tomes’ criterion, log-Plot analysis. The dependence of half-wave potentials on drop time, the reduction process was identified to be irreversible.

The sudden decrease in the current was observed at the pH 4.0, where weak adsorption of the reactant was observed. The attainable results have been used for the calculation of kinetic parameters such as diffusion coefficient, transfer coefficient and heterogeneous forward rate constants for the reduction process of keto group which are reported in Tables 1, 2 and 3 by employing D.C. polarography, CV and DPP respectively.

The linear plot of Ip Vs V1/2 Fig. 3 passing through origin and gave correlation coefficient value (R = 0.9989) was almost equal to 1 which shows that the electrode process to be mainly diffusion controlled process on the electrode surface in all the pH ranges studied. The wave/peak current (Ip) is dependent on scan rate (V) and pH of the supporting electrolyte. The reduction process was found to be irreversible and absence of anodic peak on the reverse scans in cyclic voltammetry as well as obedience of Tomes’ criterion confirmed that the electrode process was irreversible. Two protons and two electrons have participated in the rate determining step for the reduction of carbonyl group. The typical cyclic voltammograms was shown in Fig.4.

The differential pulse polarography measurements were carried out in the supporting electrolyte of universal buffer (pH - 4.0) employed in the present study. No more than one well defined peak was observed in the supporting electrolyte employed. The plots of im Vs t2/3 Fig.5 being linear and not passing through origin in all the pH ranges which indicated that adsorption complication was involved. The electrode process was found to be diffusion controlled in all the buffer systems studied, as shown by the linear plots of id Vs h1/2 Fig.6 that pass through the origin indicating the absence of adsorption complications. The observed differential pulse polarogram is presented in Fig. 7.

Identification of the product: Millicoulometry was employed to find out the number of electrons participated in the electrode process. From the slope of E1/2 vs pH plot Fig. 8, we were delighted to find out from the results that the number of protons involved in the rate determining step of the electrode process are found to be two, therefore, two electrons were involved in the reduction processes of Ketamine. Controlled potential electrolysis experiment were conducted at -0.28 V Vs SCE at pH 4.0 and the corresponding decay was noted using a galvanometer.

The electrolysis was allowed to proceed virtually to completion. The product formed after controlled potential electrolysis has been identified as the hydroxyl derivative which was formed by the reduction of keto group present in the ketamine drug and it is confirmed by IR spectral data. In IR spectra of the product Fig. 9, the disappearance of absorption band at 1685 cm-1 corresponding to –C=O and appearance of new broad band at 3438 cm-1 for –O-H stretching confirmed the reduction processes of keto group. In addition, the bands at 1360 cm-1 related to O-H bending and 1245 cm-1 corresponding to C-O stretching were observed. 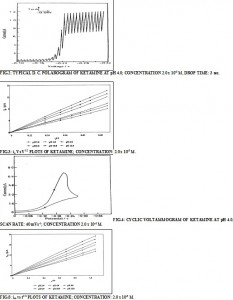 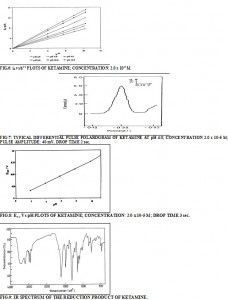 Kinetic data: Diffusion coefficients, transfer coefficients and heterogeneous forward rate constants calculated at various pH values in cyclic voltammetric technique are furnished in Table 2. The diffusion coefficient values were seen to decrease gradually which account for the decrease in diffusion current with an increase of pH due to the less availability of protons. The heterogeneous forward rate constant values of the compound under investigation were seen to decrease gradually with an increase of pH of the supporting electrolyte. This might be an account for the shift of reduction potentials towards more negative values with an increase of pH. An increase in pH increases the dissociation constant of the protonated species and these factors affect the protonation rate and consequently the reduction potentials were shifted to more negative values.

On the basis of the experimental results obtained, the following mechanism can be suggested for the voltammetric reduction of Ketamine which corresponds to the usual reduction mechanism for the keto group:

The recommended stock solution (2.0 x 10-5 M) of Ketamine was prepared by dissolving the required quantity of the electro active species in methanol. Standard solutions are prepared by dilution of stock solution with a suitable amount of dimethylformamide (DMF). 1.0 ml of the standard solution was transferred into the voltammetric cell and made upto 9.0 ml with supporting electrolyte for achieving the required concentration. Before the voltammetric run, we were purging the nitrogen gas for 10 min to avoid dissolved oxygen.

After recording the voltammogram, small increments of the standard solutions were added and then voltammograms were recorded for each addition under similar conditions. The optimum conditions for the analytical determination of Ketamine at PH 4.0 are found to be a drop time of 3 sec, pulse amplitude 40 mv and applied potential of -0.28 V Vs. saturated calomel electrode.

Ketamine in pharmaceutical formulation namely ketaset should be administered intravenously by rapid injection or hort/prolonged infusion. Virtually 5 mg of the ketaset formulation was taken and it was made to required concentration with dimethylformamide in standard flask. From the standard solution 1.0 ml of the solution was taken and diluted with 9.0 ml of supporting electrolyte (pH 4.0) and resulted solution was subjected to voltammetry. With the help of calibrated graph, the amount of Ketamine in portion of the sample was calculated. From the recovery studies on formulations containing Ketamine, the assay results for Ketamine in pharmaceutical formulation at pH 4.0 are given in Table 4. The recoveries are in the range 96.60% to 99.66 for ketaset samples.

The applicability of the method for the estimation of Ketamine in urine was checked by using different spiked urine samples coupled with standard addition method. Direct determinations in undigested urine may yield for certain pro-bands unreliable data due to trace metal trapping by natural chelating substances. An aliquot of 2.0 ml of urine without treatment were diluted with water to 25 ml in a volumetric flask and 0.1 ml aliquot of this solution was transferred into a 25 ml calibrated flask. 6 ml of universal buffer pH 4.0 were added and diluted to the mark with water. The samples were measured according to the above described procedure.  The voltammograms of samples without Ketamine does not show any signal that can interfere with direct determination. The urine samples was to study various possibilities to overcome a biomatrix effect and to find the best solution but to explore the way for simple, reliable, fast determination of Ketamine  in urine by its dilution on employing differential pulse polarography.

The potential interference of some urine ingredients both organic and inorganic salts was checked without adding depolarizer. None of these ingredients did affect the determination of Ketamine. The recoveries are in the range of 96.00% to 99.33%. The results were presented in Table 5. The described method was less time consuming than other methods and has satisfactory precision.

Analysis: In differential pulse polarography, well defined wave/peak obtained at pH 4.0 is used in the analytical estimation of Ketamine. Both standard addition and calibration methods are used for the analysis of Ketamine. The peak current was found to vary linearly with the concentration of Ketamine over the range of 2.0 x 10-5 M to 2.0 x 10-9 M with the lower detection limit of 0.92 x 10-9 M. The correlation coefficient and relative standard deviation values are found to be 0.997 and 1.18% respectively for ten replicants.

CONCLUSIONS: The work describes the voltammetric behavior of Ketamine based on the reduction of keto group at dropping mercury electrode and hanging mercury drop electrode. Recovery result shows that differential pulse polorogrophy was a simple, reliable and inexpensive method for the determination of Ketamine in formulations. The main advantage of the proposed method over the other one is that the recipients do not interfere and a separation procedure is not necessary.

ACKNOWLEDGEMENTS: The authors express their thanks to UGC, New Delhi, Government of India for providing the financial assistance through major research project, UGC letter No: F. 39-825/2010 (SR). dated 13-01-2011.