ABSTRACT: Emblica officinalis and its derivative (Ascorbic acid) have profound effect on development and regeneration and are widely used in the Indian System of medicine for the treatment of different type of disease. Here, we discussed the comprehensive account of the effect of aqueous extract of the fruit of E.officinalis with special reference to cardiac tissue regeneration in frog tadpoles. E.officinalis was found to be a good model to accelerate regeneration ability of infracted cardiac cells which further give rise to intact cardiac part (intact ventricle part) in all mode of experiment employed i.e insitu (in vivo), in transplantation setup and in culture medium. The most spectacular case was rhythmic beating of implanted cardiac tissue at ectopic site of tail of E.officinalis treated tadpoles. The E.officinalis supplemented cultures were also appeared to be a suitable for investigating the changes occurred during regeneration and differentiation of cardiac muscles.

Chronic administration of E.officinalis produces myocardial adaption by augmenting endogenous antioxidants and protect rat heart from oxidative stress associated with IRI10. Banot et al.1 reported that E.officinalis induced lens regeneration in different developmental stages of the toad Bufo meleanstitus. Juce of E.officinalis may be beneficial for the treatment of myocardial damage associated with type-1 diabetes mellitus12. Ojha et al 9 studied the cardioprotective effect of E.officinalis on induced cardiotoxicity in rats and the result obtained conform the restoration of hemodynamic and left ventricular function along with significant preservation of antioxidents.

Emblica increase cellular proliferation and cross linking of collagen at the wounded site. It accelerate wound concentration and closure13. It was also reported by several workers that chemicals or drugs which accelerate dedifferentiation and proliferation of cells are beneficial to regeneratio2, 3, 4, 6, 7, 8, 11, 15. The cited references motivate to explore more knowledge regarding the role of Emblica in cardiac regeneration.

Young (3 toe stage) tadpoles of the frog, Rana cyanophlyctis were used as experimental animals. Tadpoles were fed on half boiled spinach leaves. Tadpoles were anaesthetized in 1:2000 MS222 solution before operation and fixation. Experiments were conducted at room temperature (350C -370C).

Fine meshed fruits of Emblica officinalis (100g) was mixed with two liter of tap water and kept for 24 hours. The solution was boiled in pressure cooker. The vapours of such solution were condensed to get its watery form and were collected in sterilized beaker. This extract was treated as standards solution (Aqueous Extract of Emblica officinalis).

To study the effect of Emblica officinalis on cardiac tissue regeneration, three experiments were conducted.

Experiment I: In vivo study of Emblica officinalis on heart regeneration.

Anesthetized tadpoles were secured ventral side up in a slotted moist cotton pad. Sterilized forceps were used to penetrate the skin, muscles and pericardial sac. A tip of ventricle (almost 20 %) was cut with irridectomy scissors (Fig. 1). After surgery tadpoles were immediately returned to either tap water (for control group) or E.officinalis (5 ml of standard solution/500ml of tap water) solution for treated group.

The operated animals were preserved at different time intervals in Bouin’s solution for histological evaluation. Experiments were terminated on day 20 after operation.

Experiment II: Study of cardiac tissue regeneration at ectopic site of tail of frog, Rana cyanophlyctis under the influence of Emblica officinalis.

A pit of about 1mm deep was made by a sharp sterile needle at mid lateral position (towards the trunk) of the tail and a pin head size meshed cardiac tissue implanted into the pit on recipient tadpoles tail (Fig. 7). After insertion of the cardiac tissue explant, skin flap was covered over it. Half of the operated tadpoles were reared in Emblica officinalis solution for first 3 days and then transferred in tap water. Remaining were not treated with E. officinalis . Operated tadpoles of both series were fixed in Bouin’s solution for 24 hours on day 5, 10 and 20 after operation for histological evaluation.

Meshed ventricle tissue of young tadpole was employed as explant. For this purpose three toe stage young tadpoles were immersed in 1% Euclorine solution for 30 sec., rinsed thrice in sterile Holtfreter’s solution and anaesthetized with MS 222 (Sandoz) 1:2000.

Operations were carried out in sterile Holtfreter’s solution containing 100 U/ml penicillin, 100 µg/ml streptomycin and 0.25 µg/ml Fungizone (GIBCO). During operation, the heart of young tadpole was exposed out by making a cut on an anterior ventral surface of skin and then the tip of ventricle was incised. In the same way, the ventricular tips from ten young tadpoles were pooled and meshed in Leibovitz (L-15) culture medium. The removed meshed tissue was rinsed four times in Leibovitz (L-15) diluted with sterile water (2:1) and containing 100 U/ml penicillin and 100 µg/ml streptomyocin. This meshed cardiac tissue (ventricle tissue) was treated as explant.

Culture were fixed in 95% chilled ethanol (at 4ºC), embedded in  paraffin, cut into 7 µm, serial sections and stained with Haemotoxyline and counter stain with eosin.

TABLE 1: THE INFLUENCE OF E.OFFICINALIS ON HEART REGENERATION IN TADPOLES OF THE FROG, RANA CYANOPHLYCTIS

RESULTS: The results obtained are presented in Table 1 and 2. The findings offer a useful opportunity to study the effect of E.officinalis on cardiac tissue regeneration in all three modes of experiments- in vivo, invitro and transplantation setup. E.officinalis was found to be a good model to accelerate the percentage of cardiac tissue regeneration; it was 50% in comparison to 30% in untreated control group tadpoles (Table 1).

In case of in vivo study, blastema like structure was reported to develop on amputation site on day 10 (Fig.2). On day 20 after amputation, lost part of

The proportion of these structurally altered, cardiomyocytes increased by day 10 to15. In case of E. officinalis treated tadpoles, it was reported that, accumulation of dedifferentiated cells near the edge of lesions begins and consequently blastema is formed (Fig.4). The source of blastema cells is still not well-known.; either from the dedifferentiation of resident injured cardiac tissue or from the resident progenitor cells. By day 5 the wound showed proper healing whereas by day 10 wound showed rapid resolution of granulation tissue and a restoration of normal myocardial architecture. By day 20 amputated heart showed little or no scar in the wound area particularly in E.officinalis treated cases. Myocardium was strikingly looking normal by day 20 (Figs-3,5&6) in 50% cases while in remaining cases there was little evidence of myocardial replacement.

The result obtained from transplantation set-up mode of experiment are presented in Table1. Here also E.officinalis was found to accelerate the percentage of cardiac tissue regeneration .The declining trend of regeneration with the age of animal was found similar to that of in vivo study (Table 1).  Histological changes occurred in grafted cardiac tissue showed that engrafted cardiac tissue extract lost its identity in most of the control recipient operated tadpoles. Where as in E. officinalis treated host tadpoles engrafted tissue showed good vascularization and even normal cardiac beating in majority of cases (Fig.8 and 9). It seems that E. officinalis solution enhanced the differentiation of implanted meshed cardiac tissue even at ectopic site (tail) consequently transplanted cardiac tissue differentiated like miniature ectopic heart on the tail (Fig.8 and 9). Histological study showed normal progressive differentiation of cardiomyocytes to cardiomyofibrils (Fig. 10, 11 and 12). 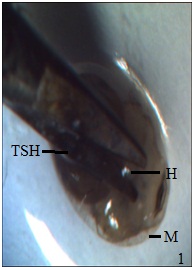 FIG.1: PHOTOGRAPH SHOWING LEVEL OF AMPUTATION (SURGICAL REMOVAL OF THE TIP OF THEVENTRICLE REGION OF THE TOAD TADPOLES, (20 X) 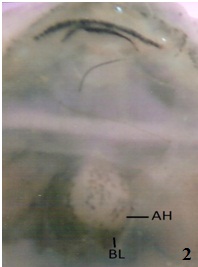 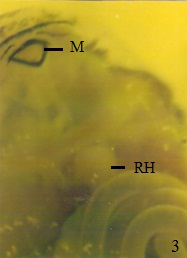 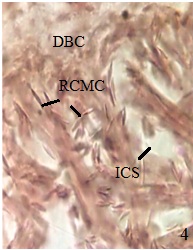 FIG.4: MICROPHOTOGRAPH OF A SECTION PASSING THROUGH THE AMPUTATED HEART OF E.OFFICINALIS TREATED YOUNG TADPOLES (5 DAYS OLD) SHOWING DEDIFFERENTIATION OF DBC IN TO CARDIOMYOCITES,(100X). 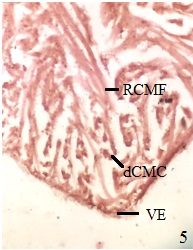 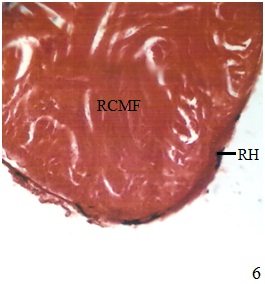 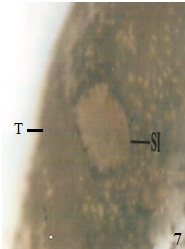 FIG.7: PHOTOGRAPH SHOWING THE SITE OF IMPLANTATION OF MESSED TISSUE. MESHED CARDIAC TISSUE WAS IMPLANTED INTO A PIT MADE ON MID-LATERAL POSITION OF TAIL OF THE HOST TADPOLE (20X).

FIG. 8 AND 9: PHOTOGRAPHS OF CARDIAC TISSUE IMPLANTS ON ECTOPIC SITE (MID-LATERAL POSITION OF TAIL). ALL FIGURES SHOWING DEVELOPMENT, DIFFERENTIATION AND GROWTH OF THE IMPLANTS. (20X) 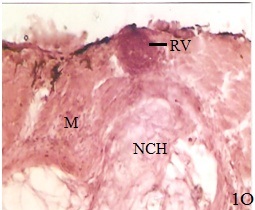 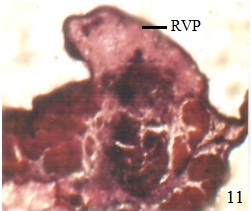 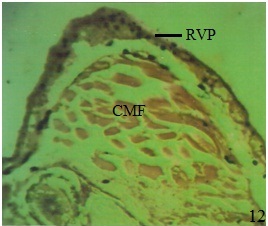 FIG.13 AND14: MICROPHOTOGRAPH OF A SECTION PASSING THROUGH THE 15&40 DAYS OLD EXPLANTS AFTER INOCULATION IN CULTURE MEDIUM SUPPLEMENTED WITH E.OFFICINALIS SHOWING COMPLETE REGENERATION OF CARDIAC TISSUE (VENTRICULAR PART).(10X) 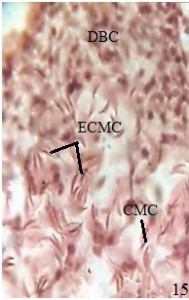 FIG.15: MICROPHOTOGRAPH OF A SECTION PASSING THROUGH THE 10 DAYS OLD EXPLANT AFTER INOCULATION IN CULTURE MEDIUM SUPPLEMENTED WITH E.OFFICINALIS  SHOWING DEDIFFERENTIATION OF DBC IN TO CARDIOMYOCITES,(100X). 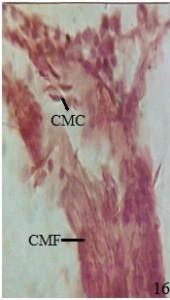 FIG.16: MICROPHOTOGRAPH OF A SECTION PASSING THROUGH THE 15 DAYS OLD EXPLANT AFTER INOCULATION IN CULTURE MEDIUM SUPPLEMENTED WITH E.OFFICINALIS SHOWING DIFFERENTIATION OF CARDIOMYOCYTES INTO CARDIOMYOFIBRILS (100X). 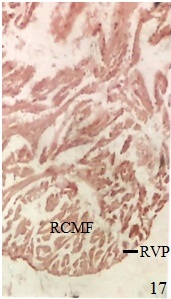 Takahashi et al.14 reported that treatment of ascorbic acid (a major constituent of Emblica) markedly increase the proportion of cardiomyocytes in infracted cardiac part of mice in vivo. Patel et al.12 reported that E. officinalis may be beneficial for the treatment of myocardial damage associated with type-1 diabetes mellitus.

In present study, E. officinalis might have enhanced dedifferentiation of myocardial tissue cells of tadpoles of Rana cyanophlyctis resulting in regeneration of cardiac tissue in all three mode of experiment. This suggests that Emblica officinalis may act as a good model employed for investigation of the molecular mechanisms responsible for cardiac tissue regeneration. Heart regeneration appears to be a suitable system for such investigation. This discovery opens the possibility that researchers may one day enhance the endogenous regenerative capacity of mammals including man by inducing cellular dedifferentiation in vivo.

ACKNOWLEDGEMENTS: The authors express their thanks to the Department of Biotechnology, IASE Deemed University, Sardarshahr (Rajasthan) for providing all research facilities to carry this work.