ABSTRACT: Danio rerio is one of the best model organisms to study various kinds of disorders. Their genome is fully sequenced and they possess easily detectable developmental properties. The development of their embryo is quite rapid. This is important as the embryos are formed by external fertilization, are large and transparent. Abortifacient is a substance that induces abortion. It can be used in the form of a herbal extract or a synthetic drug. This study was conducted by treating Danio rerio embryos with a well-known plant having abortifacient activity like Foeniculum vulgare (fennel) seeds. A methanolic seed extract of Foaeniculum vulgare was prepared and subjected to the embryos at different post fertilization periods and at different concentrations. The compounds in the extract were characterized by GC-MS and docking studies were done to identify the compound showing maximum activity. The fertilized embryos were observed at regular intervals. The fertilized embryos are surrounded by an acellular envelope called chorion. Hence, the embryos that were treated with different concentrations of the plant extract underwent shrinkage of the chorion, which affected the normal embryonic development.

INTRODUCTION: An abortifacient is a substance that induces abortion 1. Prostaglandin analogues, such as misoprostol or gemeprost(both synthetic prostaglandin E1 analogues), are often used to terminate pregnancy up to 24 2 or 60 days of gestation, in combination with mifepristone (a progesterone receptor antagonist) or methotrexate (an antifolate). Misoprostol administered vaginally is more effective than administered orally 3.

Plants being used as abortifacients, also known as herbal abortifacients, perform several functions that lead to decreased blood supply to the endometrium, the aftermath of which causes insufficiency of uterine lining to provide enough nutrients to the fertilized egg 4.

Abortion or miscarriage is mainly the result of shrinkage of uterus 5, 6. Unripe papaya, an abortifacient, interferes with progesterone by blocking its synthesis, which affects implantation 7. Some abortifacients also induce oxytocin, a hormone that induces uterine contractions that lead to abortion 8. Rue, tansy, papaya, parsley, dried up cotton roots, fennel, cohosh, wild carrot and Vitamin C are some of the examples.

Fennel (Foeniculum vulgare) has been used as one of the most important medicinal plants due to its economic importance and pharmaceutical industry application. It has been used as a flavoring agent, a scent, and an insect repellent, as well as a herbal remedy for poisoning and stomach conditions. It has also been used as a stimulant to promote milk flow in breast-feeding and to induce menstruation 9.

The zebrafish (Danio rerio) is a tropical freshwater fish belonging to the minnow family (Cyprinidae) of the order Cypriniformes. It is particularly notable for its regenerative abilities 10, and has been modified by researchers to produce several transgenic strains 11, 12.

Fertilized eggs almost immediately become transparent, a characteristic that makes D. rerio a convenient research model species. The zebrafish embryo develops rapidly, with precursors to all major organs appearing within 36 hours of fertilization. The embryo begins as a yolk with a single enormous cell on top (0 h), which divides into two (0.75 h) and continues dividing until there are thousands of small cells (3.25 h). The cells then migrate down the sides of the yolk (8 h) and begin forming a head and tail (16 h). The tail then grows and separates from the body (24 h). The yolk shrinks over time because the fish uses it for food as it matures during the first few days (72 h).

In the field of insilico studies, a method which predicts the preferred orientation of one molecule to another when bound to each other forming a stable complex 13, is termed as docking. It is also used to predict the strength of association or binding affinity between two molecules using scoring functions. It is useful for predicting both the strength and type of signal produced and also in rational design of drugs 14. Docking has its main applications in virtual screening, drug discovery, and prediction of biological activity of compounds, binding-site identification, structure-function studies and protein engineering 15.

The main objectives includes an in vitro study of the abortifacient effect of Faoeniculum vulgare seed extract on Danio rerio embryo. Also, the compound present in the seed extract that is the cause for shrinkage of the embryonic chorion can be identified by docking studies.

GC-MS analysis: The GC-MS analysis of the methanol extract of Foeniculum vulgare was done to know the compounds present in this plant. The column oven temperature of 60°C and injection th57.4kpa is applied to give the column flow of 1.00ml/min and linear velocity of 36.5 cm/sec, with a purge flow of 3.0ml/min and split ratio is 10.0. Different parameters ion source temperature, interface temperatures were set at 2000°C and 3000°C respectively with 2.00min solvent cut time. The mass spectra taken in the intervals of 0.50Sec, with scan range of 40- 600 m/z and scan speed of 1250. The total time consumed is 34.00 min.

Preparation of the protein target structures: A typical PDB structure file consists of only heavy atoms, can contain waters, cofactors and metal ions. The structure generally has no information on bond orders, topologies or formal atomic charges. Ionization and tautomeric states are generally unassigned. Hence the protein structures need to be prepared using the Protein Preparation Wizard application in Maestro workspace of Schrodinger software. The target proteins involved in this study were Concanavalin Agglutinin, Galanthusnivalis Agglutinin and Sambucusnigra Agglutinin. The protein preparation wizard panel allows taking a protein from its raw state to a state in which it is properly prepared for use by Schrodinger. The protein preparation wizard panel has three tabs, which contain tools for the stages of protein preparation. In the import and process tab, the protein was imported and the basic tasks for fixing the structures were performed.

The review and modify tab allows to delete unwanted chains and waters, and fix or delete the groups. In the refine tab, optimization of orientation of hydrogen-bonded groups and minimization of the protein structure was done.

Preparation of ligand: The structure of the ligands obtained during GC-MS analysis, were drawn using Maestro software, which was prepared before docking. The ligands were prepared using Lig Prep, an application in Maestro workspace of Schrodinger Suite.

The resulting structures were saved in either SD or Maestro format. The simplest use of Lig Prep produces a single, low-energy 3D structure with correct chiralities for each successfully processed input various ionization states, tautomers, stereo chemistries and ring conformations; and eliminate molecules including various criteria including molecular weight or specified numbers and types of functional groups present.

Docking: Glide (Grid-based Ligand Docking with Energetics) is an application in Maestro workspace of Schrodinger Suite which is used for docking purposes. Glide searches for favorable interactions between one or more ligand molecules and a receptor molecule, usually a protein. Glide can be run in rigid or flexible docking modes;in this case, the flexible mode is used. The ligand poses that Glide generates pass through a series of hierarchial filters that evaluates the ligand’s interaction with the receptor. The initial filters test the spatial fit of the ligand to the defined active site, and examine the complementarity of ligand-receptor interactions using a grid-based method patterned after the empirical ChemScore or GlideScore function. The proteins prepared using Protein Preparation Wizard and the ligands prepared using LigPrep were loaded into the Glide supplication for docking.

Collection of embryos: The zebrafish (wild type) were maintained under standard lab conditions. The embryos were collected by natural spawning and they were incubated at 28.5°C. The extract of Foeniculum vulgare seeds was added to different containers containing fertilized Danio rerio embryos. From the GC-MS analysis, camphor was found to be present in the seed extract that showed maximum activity in binding energy during in silico studies. Hence, 96% camphor was purchased from Sigma Aldrich and was tested at different stages of the embryonic development at different concentrations of 10mg/l and 15mg/l.

GC-MS Analysis: The methanol extract of Foeniculum vulgare seeds was subjected to GC-MS analysis and it showed 8 different compounds. The complete details of GC-MS chromatogram was shown in Fig. 1. The list of 8 compounds along with the Retention time and the area was shown in the Table 1. 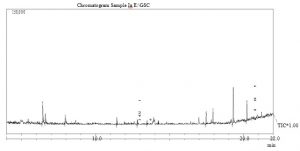 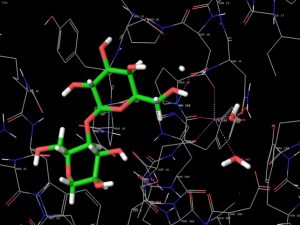 FIG. 2: DOCKED RESULT OF THE LIGANDS WITH 3CNA

TABLE 2: DOCKING RESULTS FOR THE LIGANDS WITH THE TARGET PROTEIN 3CNA 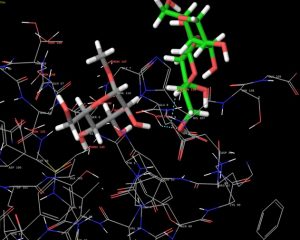 FIG. 3: DOCKED RESULT OF THE LIGANDS WITH 1MSA

TABLE 3: DOCKING RESULTS FOR THE LIGANDS WITH THE TARGET PROTEIN 1MSA 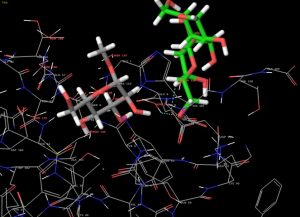 FIG. 4: DOCKED RESULT OF THE LIGANDS WITH 3CA4

TABLE 4: DOCKING RESULTS FOR THE LIGANDS WITH THE TARGET PROTEIN 3CA4

Analysis of the plant extract: The effect of camphor was analyzed at two distinct stages and these include: 1 hour post fertilization stage: The Danio rerio embryos treated with camphor at 10mg/l were observed under the microscope 1 hour post fertilization to observe any changes in normal embryonic development of the zebrafish. The complete result of treated 1 hpf embryo with different time interval and concentration was shown in Fig.5 (B) along with the control in Fig 5 (a). 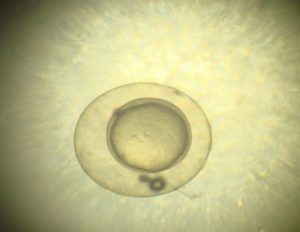 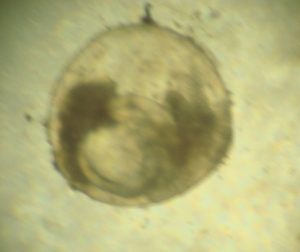 20-21 hour post fertilization stage: The Danio rerio embryos treated with camphor at 15mg/l were observed under the microscope 20-21 hours post fertilization to observe any changes in normal embryonic development of the zebrafish. The complete result of treated 20-21 hpf embryo with different time interval and concentration was shown in Fig.6 (b) along with the control in Fig. 6 (a). 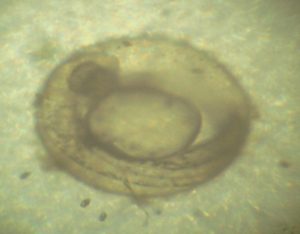 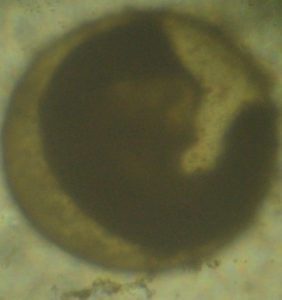 CONCLUSION: By using the Danio rerio embryos, the abortifacient effects of Foeniculum vulgare seeds are studied with different parameters like time of exposure, concentration and stages. The embryos were observed at each embryonic stage along with controls. All the embryos that were treated with various concentrations of camphor were affected and hindered the normal embryonic development. Thus, Danio rerio is the best model organism for studying abortifacient activity than the other higher organisms.

Molecular docking was performed to find out the compound present in the fennel seed extract that causes the shrinkage of the chorion of the embryo by binding to the structural proteins Concanavalin Agglutinin (3CNA), Galanthus nivalis Agglutinin (1MSA) and Sambucus nigra Agglutinin(3CA4). 8 compounds were obtained from GC-MS study. These 8 compounds were docked with each target protein.

After the G-score and glide energy calculations were done for each compound, it can be concluded that the compound with the least G-score and least glide energy have more stable interactions with the target protein and has higher capability of binding to the proteins and inhibiting their function. After docking studies were analyzed, camphor, a terpenoid and a chief constituent of fennel seeds, was concluded to be the compound with the least G-score and glide energy. Hence, camphor was proven to have a greater rate of abortifacient activity when tested on Danio rerio embryos.

ACKNOWLEDGEMENTS: The authors are thankful to the Department of Bioinformatics at Avinashilingam Institute for Home Science and Higher Education for Women, Coimbatore, for providing the necessary facilities and support.