INTRODUCTION: L-glutamic acid was isolated from wheat gluten by Ritthausen in 1866, but its major applications were focused by Ikeda in 1908 1. He identified its taste as the fifth modality (umami) and first commercialized its monosodium salt (monosodium glutamate/MSG) as a new seasoning ‘Ajinomoto’ in 1908 1. Since then, several trials have been made to improve its production. Acid hydrolysis of wheat gluten is a difficult process. It also produces a large volume of waste products 2. To meet the huge market demand for MSG, scientists went for its chemical synthesis.

Though it was commercially used for a certain period, it produced a racemic-mixture of DL-isomers of glutamic acid from which separation of stereo-specific L-isomer is also very difficult task 3.

Addition of Trace Elements to the Basal Salt Medium: The basal salt medium was shaken twice with a mixture of  0.1 g of 8-hydroxyquinoline and 5 ml of chloroform in a separating funnel using two different pH levels, first at pH 7.2 and then at pH 5.2. After each round of extraction, the solution was washed thrice with 5 ml chloroform and then again once with 10ml chloroform to make the medium free from 8-hydroxyquinoline.

Analysis of Amino Acid: Descending paper chromatography was employed for the detection of L-glutamic acid. The solvent system used was composed of n-butanol: acetic acid: water (2:1:1). The spots were visualized by spraying 0.2% ninhydrin in acetone. The quantitative estimation was done by the colorimetric estimation method.

Estimation of Dry Cell Weight: After centrifugation, 2 ml 1(N) HCl was poured into the precipitate of the bacterial cells to dissolve it. Calcium carbonate was added to neutralize it. The remaining cells were washed twice and dried at 100 ºC for 16 h till the cell weight remained constant.

Statistical Analysis: All data were expressed as mean ± SEM, where n = 6. The data were analyzed by one way ANOVA followed by Dunett’s post hoc multiple comparison test using prism 4.0 (Graph pad Inc., USA). A ‘p’ value less than 0.05 was considered significant, and less than 0.01 as highly significant. Clean pyrex glassware was used to prevent contamination. Analytical grade reagents (AR), deionized and double distilled water, and Borosil glass goods were used throughout the study. The medium was sterilized in an autoclave at 15lb pressure for 15 min.

Effect of Initial pH: pH is an important parameter that affects metabolic processes significantly. Thus, the pH of the growth medium influences bacterial growth and metabolite production. Microbial L-glutamic acid export occurs when the growth is limited. Furthermore, the growth of the microorganism also affects the pH of the medium. In order to assess the link between the pH of the medium and L-glutamic acid production by the mutant, the production medium was adjusted with different pH (6-8) using 1(N) HCl and 1(N) NaOH. After incubation with 3% inoculum, the fermentation was carried out using the shake flask fermentation method in a BOD incubator with a shaker rotating at 150rpm. 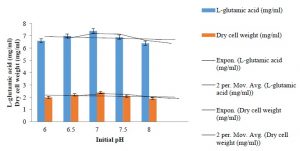 Effect of Period of Incubation: Bacterial cell growth increases exponentially between 24-72h of submerged fermentation. This stage is known as log phase or exponential phase. But as soon as it reaches the stationary phase with concomitant depletion of nutrients and accumulation of secondary metabolites in the production medium that may inhibit growth and L-glutamic acid production. An experiment was designed to optimize the period of incubation, considering a range from 24-96 h. Maximum L-glutamic acid production was obtained with 72 h of incubation Fig. 2. 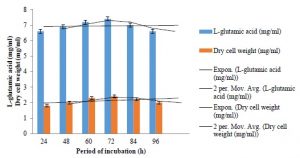 FIG. 2: EFFECT OF PERIOD OF INCUBATION

Effect of Volume of Medium: Oxygen is an important parameter for fermentation. It was continuously supplied to the flask by vigorous rotation on a shaker. It was reported that under poor oxygen supply, lactic acid and succinic acid accumulation occur in the fermentation broth, and more oxygen supply led to the production of alpha-ketoglutaric acid. Furthermore, it was also evident that excess oxygen supply inhibited cell growth and thus, amino acid production was decreased. In this study, different volumes (15-50ml) of basal salt medium were examined in 100ml Erlenmeyer conical flasks. Maximum production of L-glutamic acid resulted in 30ml production medium Fig. 3. 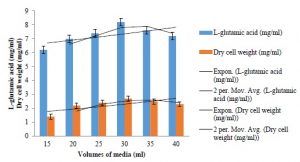 FIG. 3: EFFECT OF VOLUME OF MEDIUM

Effect of Size and Age of Inoculum: Inoculum size (in terms of cell density) and ages of inocula have a significant impact on L-glutamic acid production as the metabolite production is highly dependent on the growth phase. Moreover, inoculum size is also crucial as too small inoculums size may give insufficient biomass whereas too large inoculum may result in too much cell density and subsequently deplete the nutrients from the broth rapidly, leading to the sharp decline of product formation. Owing to the fact, the present study investigates different sizes and ages of inoculum size to optimize L-glutamic acid production ranging from 1-6% (each ml contains 2 × 106 cells) Fig. 4, 5.

FIG. 5: EFFECT OF AGE OF INOCULUM

Effect of Temperature: Temperature is one of the key regulators of metabolism. Change in temperature will shift the metabolic pattern from one component to another and unbalancing the whole metabolic process. To maintain the proper growth pattern, the temperature must be rigorously maintained. To obtain maximum productivity, the experiments were carried out at different temperatures (26-32 ºC). Maximum L-glutamic acid production was obtained at 30 ºC (10.8mg/ml) Fig. 6. 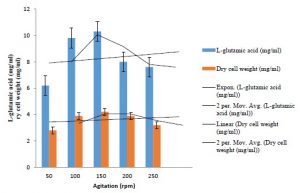 Selection of Carbon and Nitrogen Sources: Selection of Carbon Source: Several studies revealed that L-glutamic acid-producing bacteria could utilize different carbon sources such as glucose, fructose, maltose, lactose, sucrose, xylose, starch, etc. However, higher glucose concentration inhibits bacterial growth and L-glutamic acid yield. In this study, different carbon sources like glucose, fructose, sucrose, maltose, ribose, xylose, arabinose, starch, and dextrin were checked for utilization as a carbon source by this mutant for L-glutamic acid fermentation by replacing the basal salt medium with 10% of carbon sources one by one Fig. 8. In this course of study glucose appeared to be the best carbon source for production. In the next step, different glucose concentrations (2-12 g%) were investigated. Maximum production was obtained with 10% glucose Fig. 9. 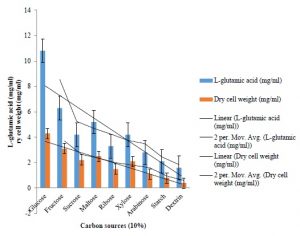 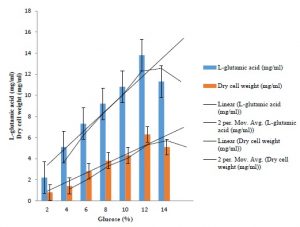 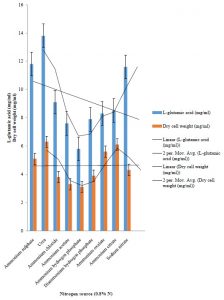 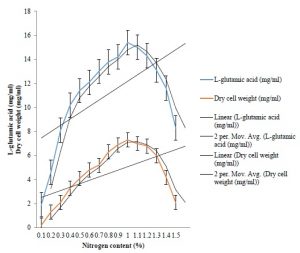 Effect of CaCO3: During the course of time, as fermentation proceeds, due to accumulation of acidic metabolites like pyruvic acid, lactic acid, gluconic acid, etc., pH of the broth gradually decreases, leading to inhibition of bacterial growth and concomitant reduction in L-glutamic acid production. Calcium carbonate acts as an internal neutralizing agent as well as it also shortens the lag phase of bacterial growth and thereby reduces the fermentation time. In order to assess the effect of calcium carbonate on L-glutamic acid production, different concentrations of CaCO3 (1-8g%) were added to the basal fermentation broth (which is completely devoid of calcium carbonate). Maximum productivity with a highest cellular population was obtained with 4% CaCO3 Fig. 12. 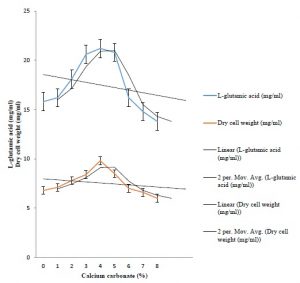 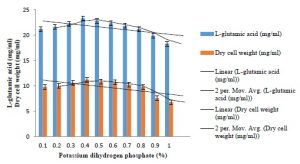 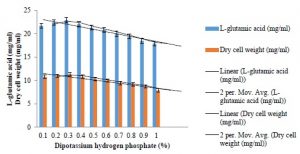 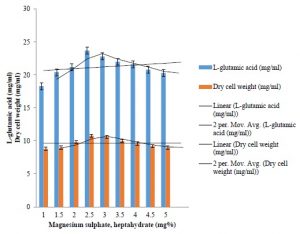 Effect of Magnesium Sulphate, Heptahydrate: Magnesium is essential for chelating ATP. It has been found that Gram-positive bacteria fail to grow when magnesium content in the growth medium is very low. Not only that, deficiency of magnesium inhibits cell division, and the rod-shaped bacterial cell becomes filamentous. The medium is optimized with varying concentrations (1-5mg%) of MgSO4. 7H2O. Maximum L-glutamic acid production was obtained with 2.5mg% of MgSO4.7H2O Fig. 15.

Effect of Zinc Sulphate, Heptahydrate: Zinc is essential for microbial growth as it serves as co-factor of several enzymes necessary for metabolism; however, excess zinc concentration showed. However, sodium chloride and potassium chloride did not exhibit any significant impact on L-glutamic acid production by this mutant.

Antibacterial activity: The present investigation was intended to examine the requirement of zinc for L-glutamic acid production by Corynebacterium glutamicum X680. The basal salt medium was adjusted with different concentrations (5-30 µg/ml) of ZnSO4.7H2O Fig. 16. ZnSO4.7H2O, 10µg/ml is essential for production. 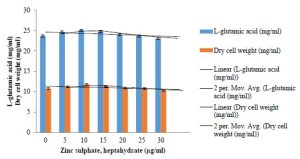 Effect of Ammonium Orthomolybdate: Moly-bdenum is particularly essential for bacterial nitro-gen assimilation. Owing to the fact, in this present investigation, different concentrations of ammonium orthomolybdate (5-30µg/ml) were examined, among which 10 µg/ml appeared to be the best for L-glutamic acid production Fig. 17. However, manganese sulphate in lower concentrations had no effect on L-glutamic acid production by this mutant, and in higher concentrations, it exhibited a lethal effect on both bacterial growth and productivity. Cupric chloride also showed an adverse effect on the growth and thereby L-glutamic acid fermentation. Cadmium is a toxic heavy metal inhibits bacterial growth and, therefore, its productivity. 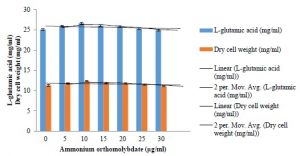 Effect of Ferrous Sulphate, Heptahydrate: Iron is a micronutrient essential for bacteria due to its involvement in TCA cycle, ETC, amino acids and nucleotide biosyntheses, etc. However, an excess concentration of iron exerts a lethal effect through the Fenton reaction. Thus, its concentration in the culture broth has to maintain crucially to get optimum cellular growth and amino acid production. Owing to the fact, the present investigation involves basal salt media containing different concentrations of ferrous sulphate, heptahydrate (ranging from 5-30µg/ml) to optimize L-glutamic acid production Fig. 18. Maximum production was obtained with 10 µg/ml FeSO4. 7H2O. 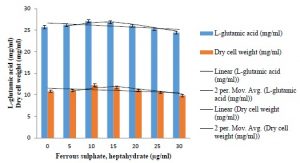 DISCUSSION: Each microorganism has a definite range of culture conditions for maximum secondary metabolite production. Therefore, it is essential to investigate the influences of different cultural conditions to maximize productivity. In the present study, the main emphasis was to scale-up L-glutamic acid production by empirical optimization of different physical and nutritional parameters. In this context, different parameters were optimized one by one leading to a significant increase (p<0.01) in the production from 7.4mg/ml to 27.6mg/ml.