ABSTRACT: Microspheres containing Repaglinide was prepared by emulsion solvent evaporation technique using two types of surfactants Tween 80 (polysorbate 80) and Span 80 (Sorbitanmonooleate 80). The effect of change in the type and surfactant amount on the size and drug release from the microspheres was investigated. The release of Repaglinide from the microspheres exhibit diffusional characteristics and closely follows Higuchi Model and also highly correlated with first-order release model. The in-vitro release study was performed in pH 6.8, phosphate buffer Solution and 0.1N HCl. Scanning electron microscopy study revealed that the microspheres were spherical and porous in nature. In vivo testing of the microspheres in diabetic albino rats demonstrated significant antidiabetic effect of Repaglinide. Repaglinide loaded microspheres expected to give new choice for safe, economical formulation for effective management of NIDDM. A clear correlation between the types of surfactant on mean diameter of the microspheres was found. When Span 80 was used, the microspheres were smaller in size as compared to those obtained using Tween 80, while there was a higher release rate when Tween 80 was used.

INTRODUCTION: Microspheres are one of the multiparticulate delivery systems and are prepared to obtain prolonged or controlled drug delivery. Microspheres can also offer advantages like limiting fluctuation within therapeutic range, reducing side effects, decreasing dosing frequency and improving patient compliance 1. Eudargit RS 100 is water insoluble polymer that is widely used as a wall material for sustained release microspheres.

This is due to its biocomptability, good stability, easy fabrication and low costs 2. Repaglinide is an oral hypoglycemic agent and first member of meglitinide class, used to treat type-2 diabetes mellitus. It blocks the ATP dependent potassium channel to stimulate release of insulin by binding to specific site on pancreatic b-cells (Van Gall et al., 2001).

Repaglinide requires frequent dosing before meals due to short half-life and there by imposing side effects such as skeletal muscles pain, headache and git effects (Fuhlendorff et al., 1998) 13. Repaglinide induces rapid onset short lasting insulin release. It is administered before each measure meal to control postprandial hyperglycemia: the dose may be omitted if a meal is missed.

Because of short lasting action it may have a lower risk of serious hypoglycemia 3. The object of the present study was, to prepare Repaglinide microspheres by the encapsulation of drug particle in Eudragit RS 100 and ethyl cellulose to investigate the effect of surfactants on morphology and the drug release from the microspheres 4. Several methods were developed for the preparation of microspheres and emulsion solvent evaporation method is one of such methods and can be used to encapsulate both water soluble and water insoluble drugs. The technique is relatively simple and has been used to prepare microspheres of a variety compounds using several different polymeric materials. There are several formulation and process parameters that, when modified during the manufacture of microspheres by solvent evaporation, may affect the properties of microspheres 5.

MATERIALS AND METHODS: Repaglinide was received as a gift sample. Eudragit RS-100, gift sample from Evonik India Pvt. Ltd. and Ethyl Cellulose from S.D. Fine Chemical, Mumbai. All other reagents and solvents used were of pharmaceutical or analytical grade.

Preparation of Microspheres: Repaglinide microspheres were prepared by emulsion solvent evaporation technique (Atrey and Lalduhsanga). Different amounts of Eudragit RS-100, ethyl cellulose and their combinations were dissolved in 8.5ml acetone separately by using magnetic stirrer (Remi equipment Mumbai, India). The core material, Repaglinide was added to the polymer solution and mixed for 15 min. Then the polymer drug dispersion was poured into 50ml of liquid paraffin (light) containing varying concentrations of dispersing agents. The whole system was then stirred for about 4 hours at 900 RPM. After stirring process is over the liquid paraffin (light) was decanted off and the microspheres formed were collected and washed 4-5 times with 50ml portions of n-hexane to completely remove the remaining oil and dried at 50 °C in vacuum drier for 6 hours and collected for further studies.

Drug Entrapment Efficiency: 50mg of dried microspheres were weighted accurately and drug was extracted from microspheres by digesting for 24 hours in 10ml of 6.8 pH phosphate buffer solution. During this period the suspension was agitated. After 24 hrs the suspension was centrifuged at 2000 rpm for about 3 minutes. The supernatant liquid was taken, after suitable dilution; drug content in the filtrate was analyzed spectrophotometrically at 242nm using shimadzu, UV-visible spectrophotometer. The drug entrapment efficiency (DEE) was determined as:

Bulk Density and Flow Property: Accurate weight (W) of microspheres was transferred into a 100ml graduated cylinder to obtain the apparent volume (V). The bulk density was calculated in gram per ml by the following formula:

The flow property of microspheres was evaluated using Carr’s Index. The results were averaged from three determinations.

In-vitro Drug Release Study: The release rate of Repaglinide from microspheres was determined using dissolution testing apparatus 2 (paddle type). The dissolution test was performed using 900ml of 0.1N HCl, at 37 ± 0.5 °C and 50 rpm. A sample (10ml) of the solution was withdrawn from the dissolution apparatus hourly for 24 hours, and the sample were replaced with fresh dissolution medium to maintain the sick condition. The samples were filtered through a membrane filter and diluted to a suitable concentration with 0.1N HCl. Absorbance of these solutions was measured at 242nm using a model 1700 Shimadzu, double-beam spectrophotometer. Cumulative percentage drug release was calculated using an equation obtained from a standard curve and same studies were performed in 6.8 pH phosphate buffer solutions.

Kinetics of Drug Release: The zero-order rate (equation 1) describes systems where drug release is independent of its concentration and this is applicable to the dosage forms like transdermal system, coated forms, osmotic system as well as matrix tablets with low soluble drugs. The first-order equation (Equation 2) describes systems in which the release is dependent on its concentration (generally seen of water soluble drugs in porous matrix). The higuchi model describes the release of the drug from an insoluble matrix to be linearly related to the square root of time and is based on Ficken diffusion (Equation 3). The Hixon-crowell cube root law (Equation 4) describes the release of drug from systems where it depends on the change in surface area and diameter of the particles or tablet with time and may applies in the case of systems that dissolute or erodes over time.

In order to authenticate the release model, dissolution data can be analyzed by peppas and kosmeye equation (equation 5),

In vivo Studies: The approval of the Institutional Ethics Committee was obtained before starting the study. The Registration No: 837/PO/Re/S/04/ CPCSEA, Resolution No: 2016/837ac/Ph.D./03 date is 07/10/2016 respectively. The study was conducted in accordance with standard institutional guidelines. In vivo evaluation studies for Repaglinide microspheres were performed in diabetics’ albino rats of either sex, weighing between 250 - 300g. After 16 hours overnight fasting blood glucose level was determine.

For the Determination of Normal Blood Glucose Level: Taking 20µl of serum, add 1500µl working reagent (GOD-POD enzyme) then kept it in incubation for 10 minutes at 37 °C, add 1500µl distilled water then determine the absorbance at 505nm. A blood glucose level of 65-110mg/dl is considered normal level. The normal blood glucose level can be determined by the following formula:

For the Confirmation of Diabetes: After 16 hours overnight fasting, the experimental animals were made diabetic by single intravenous administration of cold, freshly prepared solution of alloxan (Central Drug House, New Delhi) at a dose of 65-70mg/kg dissolved in normal saline. After 48 hours, animals with fasting blood glucose of 300mg/dl or more were considered diabetic and were employed in the study.

Drug - Excipients Compatibility Studies: The physicochemical stability and compatibility studies performed through infrared spectroscopy (Fig. 1 to 9) all shows that both types of surfactants do not cause any large shift or deviation in the spectra of the drugs when formulated into microspheres. 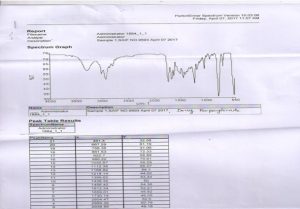 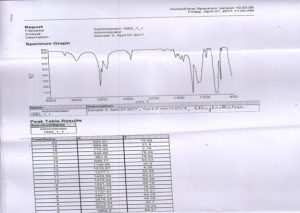 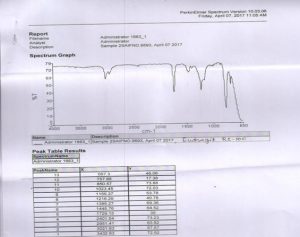 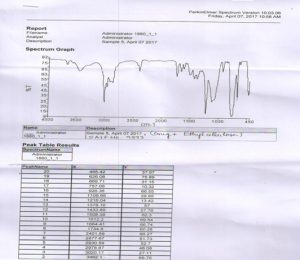 For the successful preparation of dosage form is the compatibility between the polymer and the drug. The FTIR analysis for drug alone and in combination with polymer and surfactants were carried out. In the absence of any interaction, the IR spectrum of mixtures shows peak patterns corresponding to those of the individual components.

The principal IR peaks of pure Repaglinide, Eudragit RS 100, Ethyl cellulose, Tween 80 and Span 80 are shown in Fig. 1 to 9 respectively. There were no considerable changes in the IR peaks of mixture of drug and polymer when compared to pure Repaglinide. These observations indicated the absence of interaction between Repaglinide with polymer and surfactants 4. 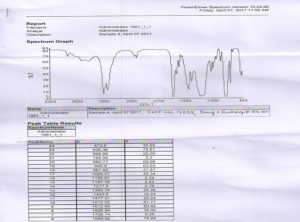 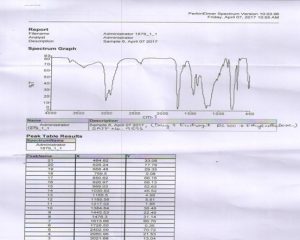 Scanning Electron Microscopy (SEM): Scanning electron microscopy of drug – loaded Repaglinide microspheres shows that the microspheres possess a rough and rouged surface. The surface contains some crystals deposited in it, which probably is a drug. The surface porosity is crucial for drug release in microspheres prepared with Eudragit RS100 and Ethyl cellulose. The release of the drugs from microspheres takes place by dissolution and diffusion through these pores. 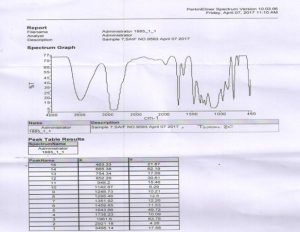 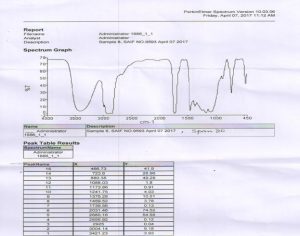 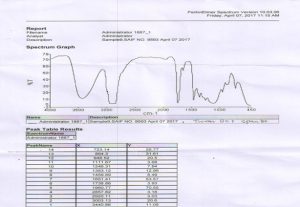 Results have been expressed as mean ± S.D 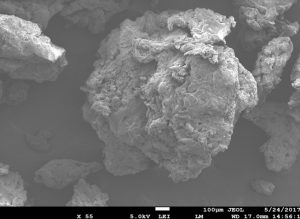 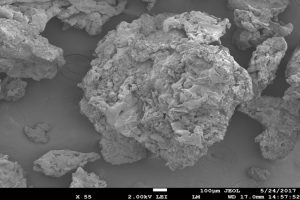 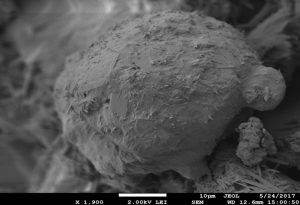 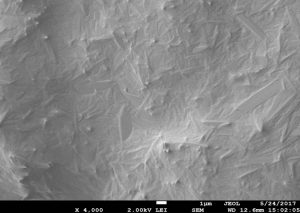 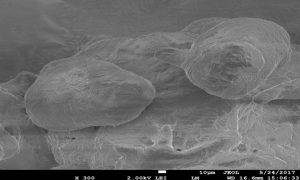 In vitro release study in phosphate buffer pH 6.8 shows that the rate of drug release was faster in case of hydrophilic surfactant (Tween 80), this is due to the hydrophilic nature of surfactant, microspheres prepared using span 80 were expected to release the drug faster than microspheres prepared using Tween 80 due to their smaller particle size. But increased surface area available for drug release was not effective enough as compared to hydrophilic nature of the microspheres. But within the same type of surfactant, increase in surfactant concentration leads to reduced particle size, increase surface area and increased drug release. 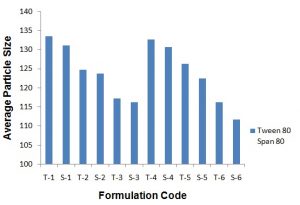 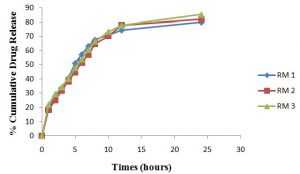 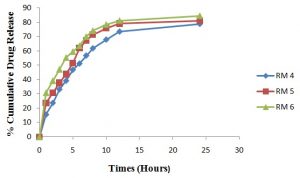 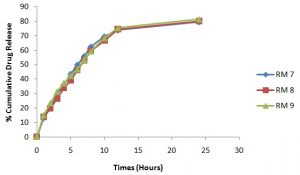 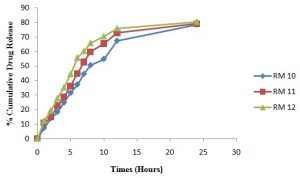 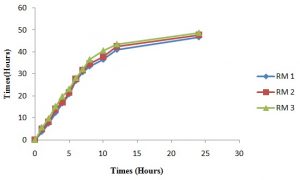 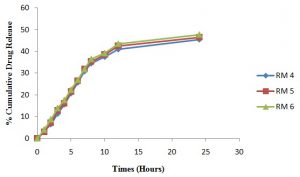 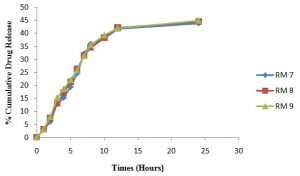 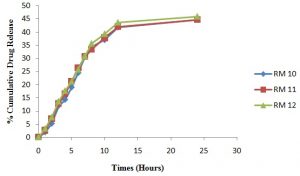 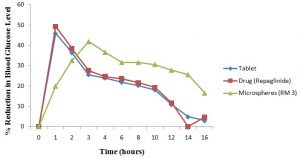 In vivo Study: After the confirmation of diabetes, the rats were divided randomly into three groups of four rats each and treated as follow: group 1 was administered with 4mg/kg body weight of Repaglinide solution: group 2 was administered microspheres and group 3 was administered marketed conventional Repaglinide tablet. Blood samples were withdrawn by the retro orbital puncture at predetermined time at 1 hour intervals up to 24 hours, and were analyzed.

CONCLUSION: The results of experiments revealed that the amount and types of surfactants having significant effects on the performance of the microspheres when microspheres were prepared by solvent evaporation methods. From SEM It was evident that the microspheres were spherical and porous in nature. The release of Repaglinide from the microspheres exhibit diffusional characteristics and closely follows Higuchi Model and also highly correlated with first-order release model.