ENHANCED BIOAVAILABILITY OF GLIMEPIRIDE THROUGH MICROEMULSION BASED TRANSDERMAL GELS

ENHANCED BIOAVAILABILITY OF GLIMEPIRIDE THROUGH MICROEMULSION BASED TRANSDERMAL GELS

ABSTRACT: The objective of the present research work was to conduct in vivo pharmacokinetic study of microemulsion based transdermal gel of glimepiride for evaluating the enhanced bioavailability.  Saturation solubility studies of the drug were conducted in various solvents and oils. Labrafil M 1944 CS, Tween 80 and Transcutol P were used as oil phase, surfactant and cosurfactants respectively for the preparation of microemulsion based on the results from solubility studies. Surfactant to cosurfactant ratio was fixed as 1:2 in all the formulations.  Microemulsion based gel was prepared using carbopol 934 as gelling agent and oil to smix ratio of 1:9. In vivo pharmacokinetic studies conducted in rabbits revealed that the bioavailability of microemulsion based gel was increased 5.4 times compared to oral suspension demonstrating avoidance of first pass metabolism and oral degradation. This indicates the effective management of plasma profile of glimepiride when it is administered as microemulsion based gel through transdermal route.

INTRODUCTION: Microemulsion (ME) is defined as an O/W or W/O emulsion having a droplet size from 10 to 100nm and does not have the tendency to coalesce 1.  MEs are composed of oil phase, surfactant, cosurfactant and aqueous phase at appropriate ratios. It is promising for both transdermal and dermal delivery of drugs as an efficient route of drug administration 2, 3.

Although many drugs have been incorporated in microemulsion for transdermal and dermal delivery, glimepiride has not been evaluated. In this study, microemulsion based gel containing glimepiride have been developed after screening oils and surfactants. The formulation was also evaluated for in vivo performance in rabbits. Glimepiride, an important drug of sulfonylurea class, is currently available for treating hyperglycemia in Non-Insulin Dependent Diabetes Mellitus (NIDDM); but has been associated with severe and sometimes fatal hypoglycemia and gastric disturbances like nausea, vomiting, heartburn, anorexia and increased appetite after oral therapy. Since the drug is usually intended to be taken for a long period, patient compliance is also very important. Glimepiride showed favorable partition coefficients (1.8 in octanol/pH 7.4 buffer). Hence, in the present research work an attempt was done to prepare microemulsion based gels of glimepiride for transdermal delivery 5-6.

Glimepiride was obtained as gift sample from biochem pvt ltd, India.  Labrafil 1944CS and Trancutol-P were received as gift samples from Gattefosse, India. Remaining all the excipients were purchased from Finar Chemicals India.

The micro emulsion formulations were prepared by using Labrafil M 1944 CS as oil phase, Tween 80 as surfactant and Transcutol P as co- surfactant. Smix ratio was fixed as 1:2 in all the formulations. Glimepiride loaded microemulsion was prepared by taking oil to Smix ratio of 1:9 (which is previously optimized). Microemulsion was prepared by mixing the oil phase and water phase at constant stirring rate. The surfactant mixture and drug was added to the oil phase, followed by drop wise addition of aqueous phase to oil phase at constant stirring rate until turbidity was observed7.

Formulation development of microemulsion based gel:

The optimized formulation of microemulsion was incorporated into gel base. Carbopol 934 was selected as gelling agent. About 1g of carbopol 934 was soaked in the 100 mL of distilled water overnight. The formed carbopol 934 gel base was neutralized by drop wise addition using triethanolamine (TEA) till the pH was adjusted to 6.8. To the gel base the best microemulsion formulation equivalent to 10 mg dose for glimepiride was dispersed slowly with the help of overhead stirrer 7.

In vivo studies were conducted in accordance with the approval of the Institutional Animal Ethical Committee. The in vivo pharmacokinetic study was conducted in white newzealand rabbits weighing 3.10 -3.50 kg. Comparative pharmacokinetic evaluation was made between optimized microemulsion based gel and oral suspension with the same dose. The oral suspension was prepared by suspending the weight equivalent drug in 0.5 % w/v sodium carboxy methyl cellulose. Rabbits involved in the study were acclimatized to the study environment one day before the study. They were allowed to take standard diet and water until the night prior to begin the study 8, 9.

The rabbits were fasted for 10 h. Latin square two ways cross over design was followed in the study. Total animals were divided into two groups each group consisting of three rabbits. The rabbits used for MEBG were shaved carefully with the help of electrical shaver before applying the formulation and then cleaned with distilled water. In first study period one group was administered with oral suspension through oral feeding tube followed by rinsing with distilled water and other group was applied with 1g equivalent MEBG on to the skin to cover the 4 sq.cm surface area and covered with water impermeable back up membrane, further fixed with adhesive membrane.

In second study period formulations were administered vice versa. Wash out period of 15 days was maintained between each study period to eliminate the complete drug from the body. Blood samples of about 2-3 mL were collected from ear marginal vein at predetermined time intervals such as 0, 0.5h, 1h, 2h, 4hm 8h, 12h, 24h, 36h and 48h respectively after administration/application of formulation10. Plasma was separated and analysed for amount of drug present by RP-HPLC method10.

The relative bioavailability = AUC of MEBG/AUC of oral suspension

The in vivo pharmacokinetic study was conducted in white newzealand rabbits. Comparative pharmacokinetic evaluation was made between optimized microemulsion based gel and oral suspension with the same dose. Latin square two ways cross over design was followed in the study. Blood samples of about 2-3 mL were collected from ear marginal vein at predetermined time intervals such as 0, 0.5h, 1h, 2h, 4h, 6h, 8h, 12h, 18h 24h, 36h and 48h respectively after administration/application of formulation. Plasma was separated and analysed for amount of drug present by RP-HPLC method. Plasma concentrations time profile is given in Fig.1. Different pharmacokinetic parameters were calculated in each rabbit by using software KINETICA 2000 (Version 3.0) and are given in Table 1. Various pharmacokinetic parameters includes Cmax, Tmax, AUC (Area Under the Curve) and relative bioavailability. 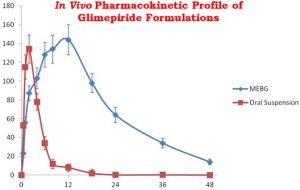 CONCLUSION: The study demonstrated that the microemulsion based gel formulation can be employed to improve the solubility and skin permeability of glimepiride. Microemulsions were prepared successfully using labrafil M 1944CS as oil, tween 80 as surfactant and transcutol P as cosurfactant. Microemulsion-based gel was successfully prepared with Carbopol 934 (1%) as a gelling agent to impart viscosity to the preparation as well as to sustain the action of the drug by increasing residence time. By in vivo studies, bioavailability of MEBG was found to be increased compared to the oral suspension. So it can be concluded that microemulsion-based gel can be formulated successfully for glimepiride with improved bioavailability and sustained action.

ACKNOWLEDGEMENTS: The authors would like to acknowledge biochem pharmaceuticals and gattefosse for providing gift samples and supporting in the successful completion of this study.

CONFLICT OF INTERESTS: The authors declare that there is no conflict of interests regarding the publication of this paper.