ABSTRACT: The present study was aimed to improve the water solubility and bioavailability of telmisartan by solid dispersion technique. Telmisartan is 4'-[(1,4'-dimethyl-2'-propyl[2,6'-bi-1H-benzimidazol]-1 '- yl) methyl]- [1, 1'-biphenyl]- 2- carboxylic acid. Telmisartan is practically insoluble in water. Telmisartan is an angiotensin II receptor antagonist (ARB), used in the management of hypertension. Solid dispersions of telmisartan were prepared by using polyethylene glycol 4000 and mannitol as hydrophilic carriers in different weight ratios by a solvent evaporation method. The drug and the solid dispersions were characterized by saturation solubility studies, in-vitro dissolution study, Fourier-transform infrared spectroscopy, differential scanning calorimetry, drug content estimation, and stability study. Based on physical characters and drug release pattern, formulation F2 (1 g drug, 4 g PEG 4000 and 1 g mannitol) exhibited the best results. The carriers, polyethylene glycol 4000 and mannitol, were found to be effective in increasing the aqueous solubility and dissolution rate of telmisartan in solid dispersions when compared to the pure drug.

Being a BCS class II drug, it is very poorly soluble in water, which results in the slow dissolution and hence low bioavailability when administered orally (~42%). The absolute bioavailability of telmisartan is dose-dependent. The bioavailability of telmisartan increased from 42% to 58%, when the dose was increased from 40 mg to 160 mg respectively 1. The solid dispersion approach can be successfully used in the improvement of solubility of poorly water-soluble drugs. Several drugs have been shown to exhibit better aqueous solubility and dissolution characteristics in the form of solid dispersion 3-7.

To overcome the low bioavailability, solid dispersion technique can be used to increase the bioavailability of telmisartan by using hydrophilic carriers.

In the present study, the solvent evaporation method had been used to prepare the solid dispersions. Methanol was used as the solvent. PEG 4000 and mannitol were used as the hydrophilic carriers. The samples were prepared at a different drug: carrier weight ratios. PEG 4000 and mannitol have been successfully used to improve the water solubility and dissolution (hence bioavailability) of several drugs 8-11.

MATERIALS AND METHODS: Telmisartan was obtained as a gift from Skymap Pharmaceuticals, Roorkee, India. PEG 4000 was purchased from Central Drug House Pvt. Ltd., New Delhi, India while mannitol was purchased from Oxford Laboratory, Mumbai, India. All other chemicals were of analytical grade and were used as procured.

PEG 4000 and mannitol were dissolved in sufficient quantity of methanol in Petri dish, and then the drug (1 g) was added slowly with continuous stirring. These mixtures were heated on a water bath until the solvent evaporated. The resultant solid dispersions were scraped out with a spatula, passed through sieve no. 60 and stored in desiccators separately until further evaluation 12.

Saturation Solubility Study: Saturation solubility of pure drug and different batches of solid dispersions was determined by shake flask method in triplicate. In this method excess amount of drug and solid dispersions of telmisartan were taken in 10 mL distilled water in 25 mL volumetric flasks. These flasks were then placed in an orbital shaker for 48 h at 37 °C. After 48 h, the flasks were allowed to withstand overnight at 37 °C. then flasks were removed, samples were filtered, and after appropriate dilutions analyzed by UV-visible spectrophotometer at 296.5 nm 13.

Drug Content Estimation: The samples of powdered solid dispersions (equivalent to 25 mg telmisartan) were accurately weighed and transferred to 25 mL volumetric flasks. About 15 mL of methanol was added to each flask, and then the flasks were shaken to dissolve the formulation completely. Then, volume was made up to the mark with methanol. This resulting solution was filtered, diluted if necessary, and the absorbance of the resulting solution was measured at the wavelength of 296.5 nm against the blank. Quantitative analysis was carried out by using the regressed line equation for the calibration curve. In each case, the analysis was carried out in triplicate 14.

The volume withdrawn at each interval was replaced with the same quantity of fresh dissolution medium maintained at 37 ± 0.5 °C. The samples were analyzed for drug release by measuring the absorbance at 296 nm using UV-visible spectrophotometer after suitable dilutions. All the studies were conducted in triplicate 15.

Stability Study: Stability study of formulation F2 was carried out by storing a sample of 1 g in a tightly sealed vial at ambient room conditions for 3 months. The formulation was visually examined for any physical change, and drug content was estimated at the end of 3 months period 17. 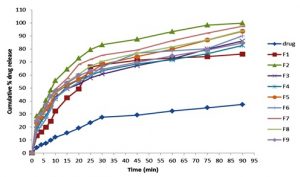 In the formulation (F2) drug: PEG 4000: mannitol (1:4:1), two peaks (fig. 3) were observed first at 60 °C and second at 168 °C, which corresponds for PEG 4000 and mannitol respectively. The peak of the drug was disappeared Fig. 9 indicating that the crystallinity of the drug was reduced and it might be converted to amorphous form 16. 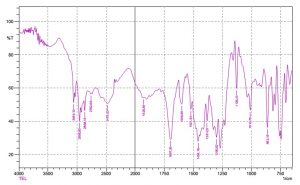 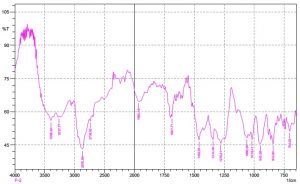 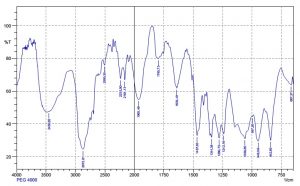 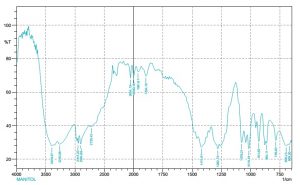 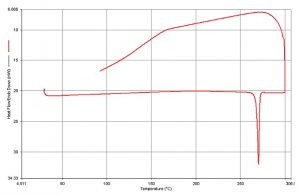 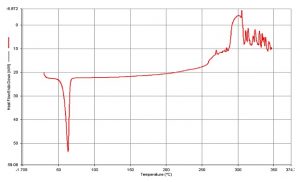 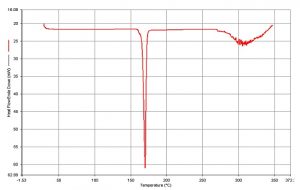 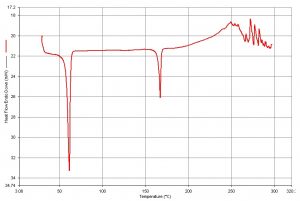 Formulation F2 was subjected to stability study at ambient room conditions for 3 months. After 3 months, it did not show any significant change in physical appearance or drug content.

It shows that the drug was stable in solid dispersion even after three months of short term storage. The result for the stability study is given in Table 3.

The method of preparation of solid dispersions was found to be simple and reproducible. The carriers used were non-toxic, relatively less expensive are easily available. The developed solid dispersion formulations were found to be effective in increasing the aqueous solubility and the drug release of the drug.

ACKNOWLEDGEMENT: The authors thank the management of the Oriental College of Pharmacy for providing the necessary facilities to carry out the research work.