ABSTRACT: Actino bacterium Streptomyces sp. NLKPB45, which was isolated from mangrove soil sediments of Nellore coastal regions of Andhra Pradesh, India, was used in shake-flask fermentation to explore the different carbon and nitrogen substrates for antimicrobial crude compound. Careful experimentation of ranging each variable in the fermentation medium found that glucose and peptone as preferred carbon and nitrogen sources at 1% (w/v) concentration each, at pH of 7 and 28 °C incubation temperature for 8 days of incubation time. Response surface methodology-based statistical optimization of the process variables with their interconnection was analyzed using a central composite design. A second-order quadratic polynomial equation yielded a complacent fit for experimental with respect to crude compound concentration. Analysis of variance statistics showed that significant-high R2 value for model and adjusted and predicted; R2 values were also shown decent agreement with observed and predicted results. The results have confirmed very good interaction among five process variables at optimized values of 7.51318 pH, 28.734 °C incubation temperature, 8.18409 days incubation time, 1.05185 g/L glucose and 1.0483 g/L peptone yielded 4.5873 g/L of crude compound concentration, which is about 20% increase due to statistical optimization by Streptomyces sp. NLKPB45.

INTRODUCTION: Aquatic eco-system had been unbolted in modern vistas to spot novel organisms that would become a hefty source of clinically important bioactive secondary metabolites.

The growth of action mycetes and synthesis of bioactive compounds are influenced by power of strain, nutrients in medium and process conditions because metabolic activities of microorganisms are affected by their surrounding environment 11, 12, 13. Conventional optimization of microbial fermentation has studied One-Factor-At at-Time (OFAT), which was painstaking and tedious.

In addition, these non-statistical methods did not attempt the interactive effects of the selected variables and misled to erroneous conclusions, so it is critical to maintaining the optimum process conditions which would yield the highest bioactive metabolite quantities with functional characteristics retained 14. The other statistical methods, such as Full-factorial design and Taguchi design, did not identify second-order effects and estimate interactive effects of process variables, respectively 12. Response Surface Methodology (RSM) was known to be a better statistical tool in systemic materializing the process variables for optimizing the many bioactive metabolite productions in submerged and solid-state fermentation 15, 16, 17.

Central Composite Design (CCD) of RSM provides the minimum number of replicates that execute the interactive knowledge of major variables and their viable interactions amid them 18, 19, 20. Hence, the present study has been conducted to optimize the individualistic process factors using OFAT and CCD program of RSM which estimates the optimal values of process variables and their interactive effects of individual parameters for the bioactive metabolite crude concentration by Streptomyces sp. NLKPB45 isolated from coastal marine sediments.

Isolation and Screening of Marine Actino-mycetes for Bioactive Metabolite Production: Mangrove soil sediment samples were collected from the territory of Krishna Patnam port at SPSR Nellore district, Andhra Pradesh, India, using a sterile spatula into labelled aseptic jars. Further, one gram of this soil sample was mixed with 10 ml of sterile distilled water, and suspension was serially diluted. Potential actinomycetes were primarily screened using spread starch casein agar plate method for their antagonistic activity by cross streak technique against bacterial pathogen (as zone of inhibition assay). In their secondary screening, filtrate of Actinomycetes culture was compared for antibacterial activities against streptomycin antibiotic, as per our previous method 21.

Production of Antimicrobial Compounds by Submerged Fermentation: After careful screening and molecular characterization, the potential actinomycetes Streptomyces sp., NLKPB45 was subcultured in 50 ml of Starch Casein broth medium, and the same was used as inoculum for submerged fermentation studies. All the fermentations were performed in 250 ml Erlenmeyer flask containing 100 ml fermentation medium. 1 ml cultured suspension was inoculated into sterile media flasks, and inoculated flasks were incubated at 28 °C on a rotary shaking incubator at 250 rpm.

Where N is the total number of experiments to be performed, n is number of process variables, NC is the number of replicated at center points. The total design matrix of CCD, comparison of experimental versus predicted metabolite crude concentrations (responses) are tabulated in Table 2. The results obtained from experiments were exactly fitted into the second-order polynomial model through the RSM.

TABLE 1: CODED AND ACTUAL FACTORS AND THEIR EXPERIMENTAL RANGES

Statistical Analysis using ANOVA: To evaluate the significance of variables for metabolite production by Streptomyces sp., NLKPB45 and their impact against the crude compound concentration, the statistical analysis using Analysis of Variance (ANOVA) was done.

Model parameters adequacy in terms of fit and prediction accuracy was checked by estimating the correlation coefficient (R2), adjusted R2, Coefficient of Variance (CV), and Fisher’s test (F-test) value. Central points were used to determine the experimental errors, and data reproducibility and randomization of the experimental sequence were also done to reduce the effect of the uncontrolled factors. A quadratic regression equation was obtained with each variable yielding an empirical model which correlates the response (crude concentration) to each of five variables, as per the following equation 2, 14.

RESULTS AND DISCUSSION: Selection of Carbon and Nitrogen sources for optimal yield of crude compound in the present study antimicrobial (bioactive metabolite) crude compound was produced using Streptomyces sp. NLKPB45 in submerged fermentation using different carbon and nitrogen substrates in the medium. The effect of carbon sources on the crude compound was studied using Fructose, Lactose, Glucose, Xylose, Sucrose, and Starch that were added at 1% (w/v). Fig. 1A shows that the addition of Glucose (2.39 g/l), Fructose (2.11 g/l), and Sucrose (2.01 g/l) significantly influenced the crude compound production, after 8 days of incubation at 28 °C.

Our results confirmed that Glucose emerged as an efficient carbon source on crude compound production. Similar findings were also reported in antibiotics production by Streptomyces sp. AS4 5, S. hygroscopicus and S. griseus in solid state fermentation 24, 25, 26. To understand the optimum level of Glucose in the fermentation media, Glucose concentration was varied from 0.25 to 1.5 g/l in the flask, and broth was analyzed for crude compound yield after 8 days of fermentation Fig. 1B. Surprisingly, the highest crude compound concentration (2.4 g/l) was achieved at 1.0 g/l glucose concentration and confirmed that the optimum carbon substrate concentration to be maintained at this level. Additionally, different nitrogen substrates (Sodium Nitrite (NaNO2), Peptone, Sodium Nitrate (NaNO3), Urea and Ammonium Chloride (NH4Cl)) were also added to media at 1% (w/v) to study their influence on bioactive metabolite production. Amon these, Peptone yielded high value (3.19 g/l) of crude compound concentration Fig. 1C. Recently, have also reported that there was the critical effect of nitrogen sources on the growth of Streptomyces sp. bacteria and antibiotics production 5.

To study the influence of nitrogen source concentration on the crude compound increased levels (0.25 - 1.5 g/l) of peptone was also added to the media and found that the highest concentration of crude was also obtained at 1.0 g/l (Fig. 1d). 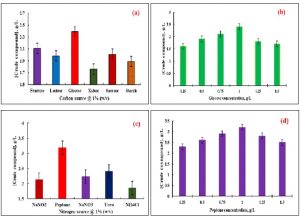 Selection of Fermentation Conditions using OFAT: Optimization of fermentation conditions like medium pH, incubation time, and temperature are necessary to improve the synthesis of antimicrobial compounds 27, 28, 29, 17, 5. 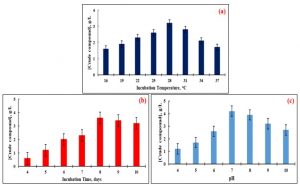 FIG. 2: EFFECT OF DIFFERENT (A) INCUBATION TEMPERATURE, (B) INCUBATION TIME, (C) MEDIUM PH ON THE PRODUCTION OF CRUDE COMPOUND BY STREPTOMYCES SP. NLKPB45.

RSM Optimization Studies and Model Adequacy for the Bioactive Metabolite Production: Many researchers worked on antimicrobial compounds research have attempted RSM as a statistical method to recognize, manipulate and optimize the influencing medium constituents and fermentation conditions and reported increased bioactive metabolites by Streptomyces sp. 34, 35, 36, 37, 17, 5. A total of 50 experiments were conducted as per CCD Table 2, and crude compound concentrations were estimated to study the impact of five variables.

Each plot in Fig. 3 assisted in illustrating the pairwise interaction (AB, AC, AD, AE, BC, BD, BE, CD, CE, and DE) of all the five factors, while the rest was held at the middle level.

The analysis of these plots had shown that all the five parameters recorded a positive effect at the beginning and reached a maximum crude concentration, and a further increase in variables levels has shown a negative effect. 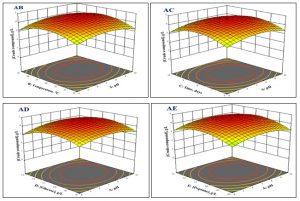 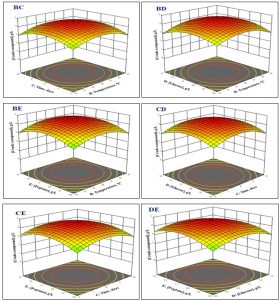 CONCLUSION: A novel Streptomyces sp. NLKPB45 was grown on different carbon and nitrogen sources to understand the better medium constituents for antimicrobial compound production. Further, using non-statistical OFAT method, critical experimental conditions were studied by performing shake-flask fermentation at 28 °C for 8 days. In addition, CCD (of RSM) based experimental study was conducted to determine the significant process variables viz., medium pH, incubation time and temperature, concentrations of glucose and peptone, and their interactions, in an efficient way. Statistical parameters of the obtained quadratic model were adequate, precise, and in good agreement with the experimental data in near concurrence with the predicted values. High values of model R2, predicted R2, adjusted R2 values, and adequate precision, and low value of CV % confirmed the accurate fit between observed and modeled data. The numerical optimization with optimal levels of five variables enhanced the crude compound concentration by up to 20% by Streptomyces sp. NLKPB45 strain isolated from marine sediments in coastal Bay of Bengal of Andhra Pradesh. The optimized medium constituents and conditions identified from this study will be attempted in large-scale fermentations for efficient antimicrobial compounds from this new bacterium Streptomyces sp. NLKPB45.

ACKNOWLEDGEMENT: The author would like to thank the Department of Biotechnology KLEF University and IKP-LSI management for providing facilities to carry out research work.

CONFLICTS OF INTEREST: There is no conflict of interest declared by the author in this paper.