INTRODUCTION: 1, 2, 3 Improving oral bioavailability of drugs that are given as solid dosage forms remains a challenge for the formulation scientists owing to solubility problems. The dissolution rate could be the rate-limiting process in the absorption of a drug from a solid dosage form of relatively insoluble drugs.

The drugs with poor aqueous solubility belong to Biopharmaceutical Classification System Class II and Class IV group of compounds and are allied with slow drug absorption leading to inadequate and variable bioavailability and G.I. mucosal toxicity of drugs.

Therefore, it is necessary to enhance the dissolution of these drugs to ensure the maximum therapeutic utility of these drugs. Before studying the various approaches to enhance dissolution, it is necessary to understand the basic process of dissolution. Dissolution is a process by which a solid substance goes into solution. The extents to which the dissolution proceeds, under a given set of conditions, are referred to as the solubility of the substance in the solvent, i.e., rate of solution (dissolution) and the amount that can be dissolved (solubility) are not same. The dissolution rate of a drug is directly proportional to its solubility as per Noyes-Whitney equation, and therefore, the solubility of a drug substance is a major factor that determines its dissolution rate and hence its absorption and bioavailability eventually. The various properties of the drug that affect drug dissolution and its rate include solubility, particle size, polymorphism, salt form, Complexation, wettability, etc. For complete absorption and good bioavailability of the orally administered drug, it must be dissolved in gastric fluids. Drugs with slow dissolution rates generally show erratic and incomplete absorption leading to low bioavailability when administered orally. Since, aqueous solubility and slow dissolution rate of BCS class II and class IV drugs is a major challenge in the drug development and delivery processes, improving aqueous solubility and slow dissolution of BCS Class II and Class IV drugs have been investigated extensively. Various techniques have been used in an attempt to improve solubility and dissolution rates of poorly water-soluble drugs which include solid dispersions (SD), Micronization, lipid-based formulations, melt granulation, direct compaction, solvent evaporation, coprecipitation, adsorption, ordered mixing, solvent deposition inclusion Complexation and steam aided granulation. In these techniques, the carrier plays an important role in improving the solubility and dissolution rate.

Solid Dispersions: 4, 5 The term solid dispersion refers to a group of solid products consisting of at least two different components, generally a hydrophilic inert carrier or matrix and a hydrophobic drug. The carrier can be either crystalline or amorphous. Most commonly used carriers for the preparation of SDs are the different grade of polyethylene glycols (PEGs) and polyvinylpyrrolidone (PVPs), Gelucire 44/14, Labrasol, sugars, and urea. The drug can be dispersed molecularly, in amorphous particles (clusters) or crystalline particles. The first drug, whose rate and extent of absorption was significantly enhanced using the solid dispersion technique was sulfathiazole by Sekiguchi and Obi. Literature reviews on solid dispersion suggest that there is an increasing interest in using this approach. The Solid Dispersion Technique is one of the most successful methods for improving the dissolution and bioavailability of poorly soluble drugs because it is simple, economic, and advantageous.

In Solid dispersions, Drugs have amorphous form, with reduced particle size, improved wettability, and higher porosity, all of which are important for better dissolution and hence, better bioavailability.

Limitations of Solid Dispersions: Although there exists a great research interest in solid dispersion, the commercial utilization is very limited. Problems of solid dispersion involve the physical and chemical stability of drugs and vehicles, method of preparation, reproducibility of its physicochemical properties, formulation of solid dispersion into dosage forms, and Scale-up of manufacturing processes.

One of the major advantages of this method is that the thermal decomposition of the drugs can be prevented as the low temperature is required for the evaporation of the organic solvents. This method has several disadvantages like the high cost of preparation, difficulty in selecting a common solvent for both the drug and carrier and complete solvent removal from the product can be a lengthy process and the fact that the crystal forms are difficult to reproduce.

Physical Appearance: All the batches of Atorvastatin and Fenofibrate solid dispersions were evaluated for color and appearance, as shown in Table 4.

Percentage Practical Yield (PY): Percentage practical yield were calculated to know about percent yield or efficiency of the solvent evaporation method. Solid dispersions were collected and weighed to determine practical yield (PY) from the following equation.

Drug Content: The Physical mixture and solid dispersion equivalent to 25 mg of the model drug were taken and dissolved separately in 25 ml of methanol. The solutions were filtered and were further diluted such that the absorbance falls within the range of the standard curve. The absorbance of solutions was determined at 245 and 285nm by UV-Visible spectrophotometer. The actual drug content was calculated using the following equation as follows:

The data obtained have been reported in Table 5.

In-vitro Dissolution Study: Dissolution studies were performed assuring sink condition according to the paddle method (USP) using USP XXIII apparatus type-II (electro lab TDT-O9T). The dissolution medium was 900 ml 0.1M SLS kept at 37 ºC ± 0.2 ºC. The solid dispersions weighing 100 mg was taken in a muslin cloth and tied to the rotating paddle kept in the basket of dissolution apparatus, the basket was rotated at 50 rpm. Samples of 5 ml were withdrawn at specified time intervals and analyzed spectrophotometrically at 245nm and 285 nm using Shimadzu-1700 UV-visible spectrophotometer; the samples withdrawn were replaced by fresh dissolution medium. Each preparation was tested in triplicate and then means values were calculated and represented in Table 6, 7, 8, 9, 10, 11 and 12 for formulations F1, F2, F3, F4, F5, F6, and F7 respectively. The formulation showing the best dissolution profile was selected and subjected to further studies like XRD and SEM.

Infrared spectroscopy (IR): FT-IR spectra of pure drugs, carriers Fig. 10, 11, 12 and 13 and the Solid dispersions were obtained by Bruker FT-IR spectrophotometer using potassium bromide (KBr) pellets. KBr pellets were prepared by gently mixing the sample with KBr (1:100). The sample was scanned from 4,000 to 400 cm-1.

X-Ray Diffraction Study: For the selected formulation Fig. 15 and pure drugs, the XRD patterns were recorded on an Equinox-3000 Multipurpose XRD.

Physical Appearance: The prepared solid dispersions of Atorvastatin and Fenofibrate were evaluated for physical Appearance. All the formulations had a creamy-white color and a fine powdery appearance Table 4. 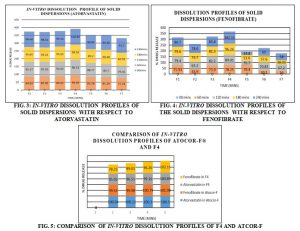 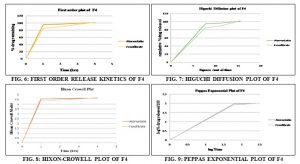 The Regression Coefficient Values of all these plots were found to be around 0.9, as presented in Table 14. 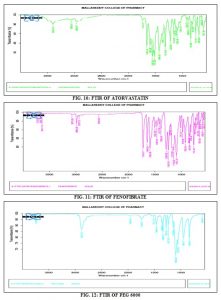 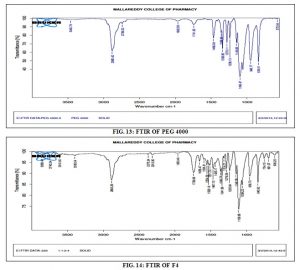 Table 15 contains the values that serve as a reference for identification of different functional groups. All the peaks in F4 were found to be within the same range as those of the pure samples. So, it can be said that there are no incompatibilities between the drugs and excipients or in between the two drugs in the Formulation F4.

TABLE 15: COMPARISON OF IR SPECTRA OF PURE DRUGS AND F4

X-Ray Diffraction Study: The XRD spectrum of the formulation F4 Fig. 15 was compared to those of pure Atorvastatin and Fenofibrate samples. 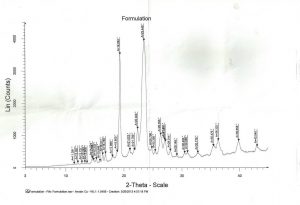 The values for 2θ in F4 were 23.449o (Atorvastatin) and 19.293o (Fenofibrate) whereas the 2θ value of Pure Atorvastatin was found to be 30.03o and that of pure Fenofibrate was found to be 22.36o. Hence, the observed degree of crystallinity of the drugs in F4 was relatively less when compared that observed in the pure samples. 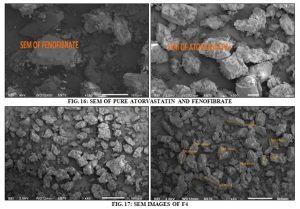 CONCLUSION: From the data obtained after the formulation and evaluation of Atorvastatin and Fenofibrate Solid Dispersions in PEG 4000 + PEG 6000 carrier system, it has been concluded that; among the seven formulations that were prepared, F4 (Atorvastatin + Fenofibrate + PEG4000 + PEG600 = 1:1:2:4) showed the maximum percentage practical yield as well as Drug content. It also showed the best in-vitro dissolution profile. When compared to Atocor-F®, the formulation F4 was found to show faster and better drug release.

SEM studies showed that the drug combination was evenly dispersed throughout the carrier system, signifying no interactions between the drugs and polymers. The drug particles were found to be irregularly shaped and in size range of 210-350µm.

Summary: Solid dispersion technology can be used to improve in-vitro dissolution properties of dissolution dependant poorly water-soluble drugs. In the present investigation, Atorvastatin and Fenofibrate, two poorly water-soluble Anti-hyperlipidemic agents were selected. The objective was to study the effect of different concentration ratios of carriers, PEG-4000 and PEG-6000, on in-vitro dissolution rate of the drug combination.