ABSTRACT: Norfloxacin is slightly soluble in water and is a synthetic antimicrobial fluoroquinolone.   Absorption of Norfloxacin is slightly impaired when it is administered with food as evidenced by a reduction of approximately 30% in the peak serum concentration. In the present study concept of mucoadhesive suspension is introduced to overcome the limitation of drug that has poor oral bioavailability and to increase the residence time of drug by bringing the drug in the vicinity of absorption window by formulating it in mucoadhesive drug delivery system. An attempt has been made to increase the bioavailability of Norfloxacin by formulating mucoadhesive suspension in different Polymers. Increase in time, speed of homogenization decreases the particle size and increases the zeta potential. Batches formulated with soyalecithin, antinucleating agents, showed decreased particle size. The comparative studies of dissolution studies showed, 99.55% of processed suspension released in 10Min. as compared to 101.63% released in 40Min. for marketed suspension respectively. The reason for increased percent release of drug in short time (10Min.), for processed suspension is, more time, speed and cycles of stirrer. These variables lead to increase in surface area of particle. It was found that the various parameters for bioavailability were enhanced by Carbopol 971P.

INTRODUCTION: Norfloxacin,1-Ethyl-6-fluoro-1,4-dihydro-4-oxo-7-(1-piperazinyl)-3-quinoline carboxylic acid, is a synthetic antimicrobial fluoroquinolone with bioavailability of 30-40%. It is effective in the treatment of urinary tract infections, gonoccocal urethritis, and infectious diarrhea 1, 2. A number of patients, especially pediatric and geriatric patients, have difficulty swallowing solid dosage forms. Therefore, a liquid dosage form of norfloxacin is needed. Since Norfloxacin is a solid and is slightly soluble in water 3, a suspension dosage form is the most suitable if the product is physically and chemically stable 4, 5.

The purpose of this study was to formulate a mucoadhesive suspension of Norfloxacin and to evaluate the bioavailability of various formulation using different polymers.

Norfloxacin sample was gifted by Hindustan Antibiotics, Pune. Pluronic F68, Soya-lecithin were purchased from Sigma Aldrich,  HPMC K100M, PVP, Microcrystalline cellulose, carbopol 971P, carbopol 974P, carbopol 934P, polycarbophil were purchased from CDH, New Delhi. All the excipients and solvents were of Analytical grades and distilled deionized water was used in all the experiments.

Saturated solution of drug in acetic acid was prepared by using mechanical stirrer. Surfactants with optimized quantity of pluronic-F-68 & Soya Lecithin were added successively with stirring to get clear solution. Then antinucleating agent was dissolved in the clear solution with low RPM. The drug was precipitated out by using 5% NaOH solution.

Preparation of different batches of suspension:

Different batches of suspension were prepared. The quantity of soya lecithin, pluronic-F-68 & anti nucleating agents was kept constant, as they were already optimized (Table 1).

Evaluation of suspension was done for following parameters.

For determination of saturation solubility, the suspensions were stirred for 24 hour with mechanical stirrer at 200 rpm and filtered. The absorbance of supernatant was measured using, Shimadzu 1700 UV-Visible Spectrophotometer.

Zeta potential was measured by using lab scale assembled zetameter. Zeta potential is one of the important parameter for determining the stability of suspension. Increase in speed or time of homogenization lead to increase in free energy of surface i.e. increase in surface area along with charges.

Whether reduction in particle size affects the crystalline nature of the drug or not was studied. The pure drug and precipitated drug were used for Differential Scanning Calorimeter and X-ray diffractometer.

The bioadhesion test was done by using falling film technique. Prepared muco-adhesive suspension (0.6Ml) was evenly placed on the intestinal section (purchased from slaughter house) & then placed over the apparatus. After 10 Min, effluent i.e. acetate buffer of pH 4 was passed over it for 5 Min. The effluent was collected and dried to determine detached particles. Thus it gave the amount of particles attached and hence the bioadhesive strength of prepared suspension.

The mucoadhesive suspension was labeled with technetium and filled in capsule shell.

Two healthy female volunteer with average age of 24Y and average weight 50kg were administered with capsule. After administration of capsule (containing labeled mucoadhesive suspension), images were collected using gamma scinticamera lined with online computer system. For collection of images, volunteers were laid in supine position under gamma camera. Images were collected at different time intervals i.e. 0, 45, 90, 180, 300, 360Min. The study was carried out on an empty stomach.

Effect of Time on Particle size:

TABLE 3: EFFECT OF TIME OF STIRRING ON PARTICLE SIZE.

Effect of speed of stirrer:

The results depicted from Table 4 conclude that as speed of homogenization increases, the particle size decreases. Batch K3, K4, K7 are with same process variables except speed, results of these batches shows that increase in speed from 3000 to 9000 rpm, decreases the particle size (Table 4).

TABLE 4: EFFECT OF SPEED OF STIRRING ON PARTICLE SIZE

Effect of no. of cycles:

TABLE 6: EFFECT OF NUMBER OF CYCLES ON PARTICLE SIZE

Effects of variables on surface area and saturation solubility:

TABLE 8: EFFECT OF SPEED OF STIRRER ON SURFACE AREA AND SATURATION SOLUBILITY

Effect of time of stirring:

TABLE 9: EFFECT OF TIME OF STIRRING ON SURFACE AREA AND SATURATION SOLUBILITY

Effect of no. of cycles:

TABLE 10: EFFECT OF NO. OF CYCLES ON SURFACE AREA AND SATURATION SOLUBILITY

As speed and time of homogenization increases, the value of zeta potential increases.

Effect of speed of stirrer on zeta potential:

Effect of time of stirring on zeta potential:

Effect of number of cycles on zeta potential: 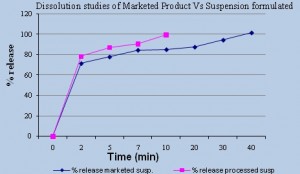 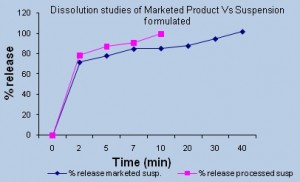