ABSTRACT: The aim of this research wok is to formulate and evaluate Ciprofloxacin solid dispersions system by using the different techniques. This will increase the solubility of the drug or Ciprofloxacin and give the immediate release of the drug from the formulations. The main objective is to formulate a drug product as immediate release oral solid dosage form of Ciprofloxacin solid dispersion system which is considered to be stable, robust quality and enhanced dissolution rate. To optimize the method of manufacture by formulate the Ciprofloxacin solid dispersion system by various techniques like Physical mixing, Co-grinding, Kneading and solvent evaporation techniques. The disintegrating agent used in the present study is Crosscarmellose sodium. Among the four different techniques used for preparation of solid dispersions solvent evaporation technique has shown the increase in dissolution rate that is the Trail-5 was found to have a faster solubility and dissolution property which was prepared by using Crosscarmellose sodium as a disintegrant in the ratio of 1:1.

INTRODUCTION:The poor solubility and low dissolution rate of poorly water soluble drugs in the aqueous gastro-intestinal fluids often cause in sufficient bioavailability rather than the limited permeation through the epithelia and the formulation of poorly soluble drugs for oral delivery now presents one of the major challenges tom formulation scientists in the industries 1. The term solubility is defined as maximum amount of solute that can be dissolved in a given amount of Solvent quantitatively it is defined as the concentration of the solute in saturated solution at a certain temperature in qualitative terms, solubility may be defined as spontaneous interaction of two or more substances to form a homogenous molecular dispersion 2.

Mechanism of action: Ciprofloxacin is a semi-synthetic (partially man-made), oral antibiotic in the cephalosporin family of antibiotics that stops bacteria from multiplying by preventing bacteria from forming the walls that surround them and it inhibit the cell wall synthesis. The walls are necessary to protect bacteria from their environment and to keep the contents of the bacterial cell together; bacteria cannot survive without a cell wall.

Solid Dispersions: The term solid dispersion refers to a group of solid products consisting of at least two different components, generally a hydrophilic matrix and a hydrophobic drug 3. The matrix can be either crystalline or amorphous. The drug can be dispersed molecularly, in amorphous particles (clusters) or in crystalline particles 4. Therefore, based on their molecular arrangement, six different types of solid dispersions can be distinguished. They are described in Table 2. Moreover, certain combinations can be encountered, i.e. in the same sample; some molecules are present in clusters while some are molecularly dispersed 5. Moreover, not the preparation method but the molecular arrangement governs the properties of solid dispersions 6.

Estimation of Ciprofloxacin: A Simple Sensitive and accurate Spectrophotometric method was used for the measurement of Ciprofloxacin at a λmax 288nm. The absorbance of standard dilutions was measured at 288nm.

Drug release studies: Dissolution studies on each formulation were performed in a calibrated eight station dissolution test apparatus equipped with paddles employing pH 7.2 phosphate buffers as medium. The paddles were operated to rotate at 75 rpm and the temperature was maintained at 37± 1oC throughout the experiment. Samples were withdrawn at regular intervals up to 60 min and replaced with equal volume to maintain the constant volume of dissolution medium throughout the experiment 10.

Drug content of the samples was determined by Spectro 2080 plus Analytical technologies ltd UV Spectrophotometer at 288nm after suitable dilution of samples 11. Necessary corrections were made for the loss of drug due to each sampling. The drug dissolved experiments were conducted in triplicate. The dissolution profile were depicted in Table 12 to 13 and shown in Fig. 13. The zero order and first order plots and their corresponding release constant were given in Table 6 to 10 and shown in Figure 3 to 12. 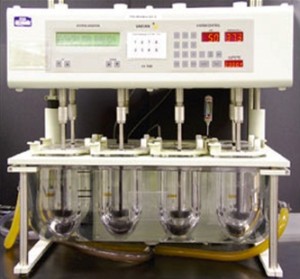 Dissolution Test Acceptance Criteria: Acceptance criteria for dissolution tests are set on the basis of requirements for a percent quantity of drug to be released after a certain period of time in the dissolution apparatus. Since each test is usually conducted using six individual dosage units, acceptance criteria must be established on this basis 11. The compendia recognize that reasonable tolerances are required to ensure that criteria are not prohibitive, but at the same time, they need to discriminate between acceptable and unsatisfactory batches of products.

The approach developed within various compendia is now harmonized for immediate release and extended release-though not for delayed release-and allows for three levels of staged testing. For immediate release products, acceptance criteria are based on a single time point and a single value, expressed as a Q value. Then, at each of the three stages, the specification requires that mean values not be less than Q, but a set number of individual units are allowed to release a percent quantity of active which may be as low as Q - 25% for one unit at stage three 12.

Procedure for Assay: The amounts of drug present in the taken oven formulations were determined with the help of U-V Spectrophoto-metric method. For each batch 100 mg of sample was taken in to the volumetric flask and add methanol and the mixer was diluted with the pH 7.2 phosphate buffer. The dilutions are made as 5, 10, 15, 20 and 25 µg/ml. The absorbance of solution was determined at 288 nm by UV Spectrophotometer. The resultant drug content and practical yield was shown in Table 11.

Physical Mixing: Accurately weighed required amount of Ciprofloxacin and Crosscarmellose Sodium (carrier) in 1:1 drug-to-carrier weight ratio were mixing thoroughly in a mortar until a homogeneous mixture was obtained for 3 min. The product was kept in desiccators at room temperature until for further study or investigation.

Co-grinding Technique: Required quantity of drug was accurately weighed and transferred in to mortar to this adds requires quantity of Crosscarmellose sodium in the ration of 1:1 were mixing thoroughly until a homogenous mixer was obtained. Triturating was carried in 10-15 min to form a homogenous mixer. The product is packed and kept in a dedicator at room temperature until for further study or investigation.

Kneading method: Drug and polymer was mixed with the small amount of the solvent i.e. water to form a thick paste by kneading and hence it was dried at 45ºC in a tray dryer. The mass was passed through the sieve no. 30 and stored in the desiccators. The product is packed and kept in a dedicator at room temperature until for further study or investigation.

The resulting solid dispersion was stored in airtight container till further use. 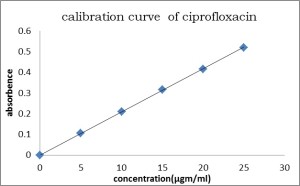 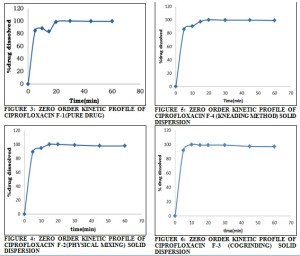 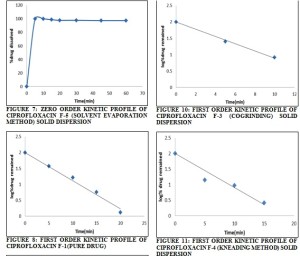 Trail-1: This trail was done by using pure drug; it has shown poor dissolution property because of less solubility of drug in the dissolution medium.

Trail -2: In this trail solid dispersion of drug was prepared by using Crosscarmellose sodium as a disintegrant in the ratio of 1:1 and by using Physical mixing method. Maximum drug release was observed at time 15 min.

Improvisation: Further, this formula was optimized for enhancing the drug release by using other technique.

Trail-3: In this trail solid dispersion of drug was prepared by using Crosscarmellose sodium as a disintegrant in the ratio of 1:1 and by using Co–grinding method. Maximum drug release was observed at time 15 min.

Improvisation: Further this formula was further optimized for enhancing the drug release by using other technique.

Trail-4: In this trail solid dispersion of drug was prepared by using Crosscarmellose sodium as a disintegrant in the ratio of 1:1 and by using kneading method. Maximum drug release was observed at time 20 min.

Improvisation: Further this formula was further optimized for enhancing the drug release by using other technique.

Trail-5: In this trail solid dispersion of drug was prepared by using Crosscarmellose sodium as a disintegrant in the ratio of 1:1 and by using Solvent evaporation method. Maximum drug release was observed at time 10 min.

Hence, the trial 5 which was prepared by using Crosscarmellose sodium and drug by the ratio of 1:1 by using solvent evaporation was found to be optimized formula.

SUMMARY AND CONCLUSION: This study was undertaken with an aim to formulate an Anti-Biotic drug in the form solid dispersion to overcome the poor solubility drawback of the drug. The selected Antibiotic agent was Ciprofloxacin. The drug Ciprofloxacin is having poor solubility in the water, under class 2 of BCS of classification of drug its solubility was tried to increase by formulating in the form of solid dispersion with polymer by using various techniques. Solid dispersions were prepared by using the Crosscarmellose sodium as a disintegrant in 1:1 ratio of different techniques.

Among the four different techniques used for preparation of solid dispersions solvent evaporation technique has shown the increase in dissolution rate that is the Trail-5 was found to have a faster solubility and dissolution property which was prepared by using Crosscarmellose sodium as a disintegrant in the ratio of 1:1. Hence finally it was concluded that Trail-5 as an optimized formula with an increased rate of dissolution rate and solubility. Trail 5 which is prepared by using drug and disintegrant ratio of 1:1 ratio by using solvent evaporation techniques.

ACKNOWLDGEMENT: The authors greatly acknowledge Director and Principal of Priyadarshini Institute of Pharmaceutical Education and Research (PIPER), Guntur, Andhra Pradesh and hearty thanks to my principal Sreekanth Nama, for providing the facilities to carry out the research work.