ENHANCEMENT OF SOLUBILITY AND DISSOLUTION RATE OF EZETIMIBE THROUGH LIQUISOLID TECHNIQUE

ENHANCEMENT OF SOLUBILITY AND DISSOLUTION RATE OF EZETIMIBE THROUGH LIQUISOLID TECHNIQUE

ABSTRACT: The present study enlightens to enhance the dissolution profile, absorption efficiency and bioavailability of water insoluble drug like Ezetimibe. It is a poorly soluble, highly permeable drug and the rate of its oral absorption is often controlled by the dissolution rate in the gastrointestinal tract. There are several techniques to enhance the dissolution of poorly soluble drugs, in which the “liquisolid compacts” is a promising technique. Different formulations were prepared by using polyethylene glycol-400 as a non-volatile liquid vehicle, with drug and vehicle ratios of 1:5 and 1:7.5, microcrystalline cellulose (Avicel PH 102), starch were used as carrier materials and nm-sized silica gel (Aerosil-200) was used as coating materials. The empirical method introduced by Spireas and Bolton was applied to calculate the amounts of coating and carrier materials required to prepare Ezetimibe liquisolid tablets. Based upon this method, improved flow characteristics and hardness of the formulation has been achieved by changing the proportion of carrier and coating material ratio from 20:1 to 5:1. They were characterized for different physical parameters to comply with pharmacopoeial limits. In vitro dissolution profiles of the liquisolid formulations were studied and compared with conventional formulation in pH 4.5 acetate buffer. It was found that liquisolid tablets formulated with microcrystalline cellulose produced high dissolution profile and they showed significant higher drug release rates than conventional tablets due to increase in wetting properties and surface of drug available for dissolution. FTIR spectral studies showed that there is no interaction between the drug and excipients. Aging studies indicates that, there is no significant effect on dissolution rate and hardness of the formulation of fresh and stored at 40±20C/ 75±5% relative humidity for 45days. In conclusion, development of ezetimibe liquisolid tablets is a good approach to enhance the dissolution rate to improve bioavailability.

INTRODUCTION:Most of the new drug candidates entering drug development pipeline fail because of non-optimal biopharmaceutical properties i.e. rate and extent of absorption, rate of distribution, dose to achieve minimum effective concentration and to avoid side effects can exert a significant influence on the drug’s absorption, distribution, metabolism, excretion, and toxicity.

Over the years, tools of drug discovery have caused a perceptible shift in biopharmaceutical properties. So these properties have significant role in the bioavailability of the drugs 1.

Poorly water soluble drugs often require high doses in order to reach therapeutic plasma concentrations after oral administration. Improvement in the extent and rate of dissolution is highly desirable for such compounds, as this can lead to an increased oral bioavailability and subsequently to clinically relevant dose reduction 2.

The dissolution properties of a drug and its release from a dosage form have a basic impact on its bioavailability.

Solving solubility problems is a major challenge for the pharmaceutical industry with developments of new pharmaceutical products, since nearly half of the active substances being identified through the new paradigm in high throughput screening are either insoluble or poorly soluble in water. The dissolution rate of a drug is a function of its intrinsic solubility and its particle size 3.

A more recent technique, entitled “Liquisolid technology” or "powdered solution technology", has been applied to prepare water-insoluble drugs into rapid release solid dosage forms 4. The concept of powdered solutions enables one to convert drug solutions or liquid drugs into acceptably flowing powders by a simple admixture with selected powder excipients (e.g., cellulose and silica). This method does not involve drying or evaporation 5. It is well established that better bioavailability of a relatively water-insoluble drug is achieved when the drug is in solution form 6.

Ezetimibe, selected in the present work is chemically 1-(4-fluorophenyl)-3(R)-[3-(4-fluorophenyl)-3(S)-hydroxypropyl]-4(S)-(4-hydroxyphenyl)-2-azetidinone belonging to the lipid lowering agents category. It inhibits the intestinal absorption of cholesterol 8. Ezetimibe is a white crystalline powder having poor aqueous solubility characteristics 9 which leads to its limited dissolution resulting in poor bioavailability (35–65%). The dissolution is a rate limiting step for the absorption of poorly water-soluble drugs and hence drugs showing limited dissolution give poor therapeutic out come as a result of poor oral bioavailability 10.

Solubility studies: For the selection of best non-volatile solvents, solubility studies were performed. In this procedure, pure drug was dissolved in two different non-volatile solvents (propylene glycol and polyethylene glycol) and distilled water. Excess amount of pure drug was added to the above solvents. Obtained saturation solutions were shaken on the rotary shaker for 48 hours at 25 0C under constant vibration. After 48 hours period the saturated solution were centrifuged at 3000rpm for about 15 minutes and the supernatant was collected and analyzed by UV spectrophotometer. 11

Calculation of loading factor (Lf) and “q” value: Loading factors were calculated for different carriers, using various solvents. By using Lf = W/Q formula (W: Amount of liquid medication and Q: Amount of carrier material), the drug loading factors were obtained and used for calculating the amount of carrier and coating materials in each formulation. The results showed that if the viscosity of the solvent is higher, lower amounts of carrier and coating materials are needed to produce flowable powder12.

Based on R value used, the corresponding q (amount of coating material) can be calculated for all formulations using the equation R =Q/q. Table 1 represents the exact qualitative and quantitative composition for each formulation.

Where, θ is the angle of repose, h is the height in cm, r is the radius in cm

­Where, M is the mass of powder, Vb is bulk volume of powder

Where, M is the mass of powder, Vt is tapped volume of powder

Various ratios of carrier to coating materials were selected and different ratios of drug: solvents were selected. According to desired quantities drug and PEG 400 were accurately weighed in a beaker and then stirred constantly, until a homogenous drug solution was obtained. Selected amounts (W) of the resultant liquid medication were incorporated into calculated quantities of carrier contained in a mortar.

Mixing: The mixing procedure was conducted in three stages. During the first stage, the system was blended with carrier at an approximate mixing rate of one rotation/sec for approximately one minute for even distribution of the liquid medication into the powder. In the second mixing stage, calculated quantities of coating material was added to the system and blended for 2 min.

The liquid/powder admixture was evenly spread as a uniform layer on the surfaces of the mortar and left standing for approximately 5min to allow the drug solution to be absorbed in interior of the powder particles. In the third stage, the powder was scraped off from the mortar surfaces by means of aluminium spatula, then producing the final liquisolid formulation to be compressed. Similar formulations were prepared by using starch as carrier materials 13.

Preparation of Conventional Tablets of Ezetimibe: Tablet containing Ezetimibe was prepared by mixing 10 mg of drug with microcrystalline cellulose (Avicel PH102) sodium starch glycolate 10% (w/w) as a disintegrant and mixed for 10 min. Glidant and lubricant are added and then directly compressed by tablet punching machine.

5ml aliquots of dissolution media were withdrawn each time at suitable time intervals (5, 10, 20, 30, 45 and 60 minutes.) and replaced with fresh medium. After withdrawing, samples were filtered and analyzed after appropriate dilution by UV-spectrophotometer. The concentration was calculated using standard calibration curve.

Spectral Analysis: Analysis by FTIR spectroscopy was carried out to assess any possible interaction between drug and hydrophilic carriers. Figure 1 and 2 depicts the FTIR spectra of drug and optimized liquisolid formulation respectively. The spectra showed no substantial shifting of the position of the functional groups. The peaks are only broadened, indicating no major interaction between EZE and hydrophilic carriers. Although hydrogen bonding could be expected between the hydrogen atom of the OH– group of EZE and the lone electron pairs of the carrier oxygen atoms, this could not be demonstrated. The stretches found in spectra were shown in table 2. 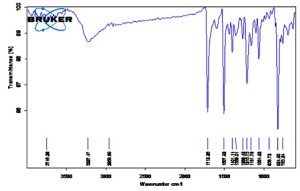 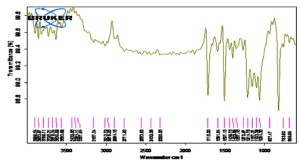 Pre Compression Evaluation Studies: All the liquisolid formulations were evaluated for angle of repose, bulk density, tapped density, Carr’s index and Hausner’s ratio. Their values were listed in table 3.

As the angle of repose is a characteristic of the internal friction or cohesion of the particles, the value of the angle of repose will be high if the powder is cohesive and low if the powder is non-cohesive and when decrease in the coating material weight there is increase in the angle of repose value which leads to good to fair flow of powder mixtures. In addition to Carr’s index, Hausner’s ratio was related to the inter particle friction. Hausner’s ratio showed that powders with low inter particle friction, had ratios of approximately 1.25 indicating good flow.

In vitro Release Studies: The percent of Ezetimibe released from liquisolid compacts containing varying amounts of carrier and coating materials (from F-1 to F-16) was found to vary from 21.58±1.17 to 87.99±1.95% in first 10min (Figure 3, 4, 5 and 6). This indicates the fast release of drug is observed from above formulations. The formulation F-8 showed the highest drug release 97.24±2.11% when compared to all other formulations. The %drug release of all the formulations were showed in table 5, 6, 7 and 8.

From the obtained results, it was displayed that there is a relationship between the powder excipient ratio and the in vitro release of Ezetimibe from liquisolid tablets. An increase in the R-value results in an enhanced release rate if microcrystalline cellulose and colloidal silica are used as carrier and coating materials, respectively.

In contrast, if high amounts of colloidal silica are used, which means that the R-value is low, the liquisolid compact is overloaded with liquid formulation due to a high liquid load factor. In such cases, even though drug diffusion out of the primary particles may be rapid, oversaturation might occur resulting in local precipitation/ recrystallization of the drug and thus decreased release rates 15, 5.

Moreover, as colloidal silica is a hydrophobic material high amounts of it can cause retardation of drug release. 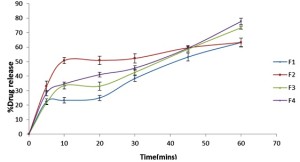 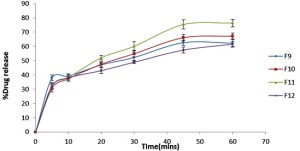 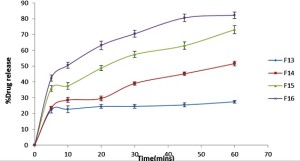 Therefore, Spireas et al, recommend a minimum R-value of 20. When starch in used as carrier material there was not much enhanced drug release observed than the Avicel PH 102. 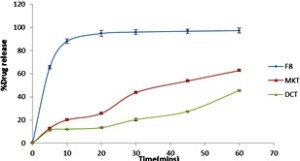 Overall increase in the dissolution performance of the optimized formulation described in terms of dissolution parameters (IDR, Q10, DR, DE) compared to marketed tablets (showed in table 9) could be due to the lesser disintegration time and increased wetting properties and surface area available for drug dissolution.

Stability Studies: Stability studies for the optimized tablets were carried out at a temperature of 40±2oC/ RH 75±5%for a period of 45 days. Tablets were evaluated for physical appearance and assay.

Tablets have not shown any significant change in physical appearance and drug content during stability studies. Hence, it was concluded that the optimized tablets have good stability during their shelf life.

CONCLUSION: Ezetimibe has solubility and dissolution limited bioavailability. Hence Liquisolid technique was chosen to develop the liquisolid compacts of Ezetimibe, to achieve fast dissolving effect and to enhance the bioavailability. The Ezetimibe liquisolid tablets were prepared by using Avicel PH 102 and starch as carrier materials, Aerosil 200 as a coating material and PEG-400 as a non-volatile solvent with different ratios of R values and drug: solvent ratios. The dissolution efficiency (DE) of optimized formulation (F-8) was increased by 1.5 times when compared to marketed formulation and 2 times when compared to directly compressed tablet. It is concluded that Ezetimibe liquisolid compacts showed significant increase in dissolution as compared to direct compressed tablets and marketed tablets.

ACKNOWLEDGEMENT: The authors greatly acknowledge Director and Principal of Care College of Pharmacy, Warangal, Andhra Pradesh and hearty thanks to our guide, K. Madhavi, for providing the facilities to carry out the research work. The authors wish to thank Alpha Med Pvt. Ltd, Hyderabad, India for providing gift samples of Ezetemibe drug, Avicel 102 PH and Aerosil 200.