ABSTRACT: Objective: In the present study to enhance solubility and in vitro dissolution of poorly aqueous soluble drug Famotidine by preparing solid dispersions using the Kneading method. Methods: Solid dispersions of the drug were prepared by the kneading method using Kollidon and Povidone K30 (as a carrier). Eight different drugs: Carrier ratios were prepared by Factorial design taking three factors, i.e., the concentration of Famotidine (X1), Kollidon (X2), and Povidone K30(X3). Results: DSC, FTIR spectroscopy, powder X-ray diffraction (XRD), and SEM studies were used to characterize solid dispersions. In vitro release was carried out using the USP II dissolution apparatus. Multilinear regression analysis was applied to develop a mathematical model to estimate cumulative drug release. The batch F4 was found to be best batch as it showed maximum solubility and in-vitro dissolution after 30 min. Improvement in the dissolution behavior of solid dispersion batches was observed due to the conversion of a crystalline form of drug to amorphous form as confirmed by DSC, FTIR studies, and X-RD studies. SEM photographs of batch F4 showed porous nature of particle surface. Conclusion: Solid dispersion prepared via Kneading method was proved to be beneficial in enhancement of dissolution rate of poorly- aqueous soluble drug using hydrophilic carriers. Respectively, this model can further be utilized to design solid dispersions for desired release characteristics.

INTRODUCTION: Oral drug delivery is the simplest and easiest way of administering drugs. Because of the greater stability, smaller bulk, accurate dosage, and easy production, solid oral dosage forms have many advantages over other types of oral dosage forms. Therefore, most of the new chemical entities (NCE) under development are intended to be used as a solid dosage form that originates an effective and reproducible in-vivo plasma concentration after oral administration 1, 2.

In fact, most NCEs are poorly water-soluble drugs and are not well absorbed after oral administration, which can detract from the drug’s inherent efficacy 3, 4. Consequently, if these drugs are not completely released in the gastrointestinal area, they will have a low bioavailability 5. Therefore, one of the major current challenges of the pharmaceutical industry is related to strategies that improve the water solubility of drugs 6. The techniques/approaches that have commonly been used to overcome drawbacks associated with poorly water-soluble drugs, in general, include micronization, salt formation, use of surfactants, and use of prodrug 7. However, all these techniques have potential limitations. Solid dispersion is the most successful strategy to improve the drug release of poorly soluble drugs.

Solid dispersion improves the solubility through decreased particle size, increase surface area, improved wettability, and increased amorphous state of water-insoluble compound 8. Sekiguchi and Obi first introduced the concept of using solid dispersions to improve the bioavailability of the poorly water-soluble drug in 1961. Chiou and Riegelman defined the term solid dispersion as “a dispersion of one or more active ingredients in an inert carrier or matrix, prepared by the melting, solvent, or melting solvent method 9. Solid dispersion (SD) technique has been widely used to improve the solubility, dissolution rate, and oral absorption of poorly water-soluble drugs 10, 11.

Famotidine is a poorly water-soluble H2 receptor antagonist and acid-reducing drug. The drug has been classified as a class IV drug as per the biopharmaceutical classification system (BCS) as a result of its low solubility and oral bioavailability. Low water-soluble drugs often exhibit low dissolution profile and oral bioavailability problems 12, 13. Therefore, the objective of the present study was to improve the solubility and in vitro dissolution profile of Famotidine using solid dispersions by Kneading method through factorial design.

Preparation of Physical Mixture (PM): A physical mixture (PM) of Famotidine with Kollidon or Povidone K30 in 1:1 ratio was prepared by thoroughly mixing the accurately weighed quantity of drug and carrier in by using glass mortar and pestle for 5 min. This mixture was then subsequently passed through mesh no. 40 and stored in desiccators for 48 h.

Preparation of Solid Dispersion (SDs): The Kneading method (KM) was used for the preparation of solid dispersion. Eight different Drug: Carrier ratios (1:1, 1:2, 1:3, 1:4, 1:5, 1:6, 1:7 and 1:8) were used. F1 to F8 corresponds to preparations containing Kollidon, and F9 to F16 corresponds to preparations containing Povidone K30. Famotidine and Kollidon or Povidone K30 were weighed according to these weighed ratios. Famotidine and Kollidon were triturated using a small volume of methanol to give a thick paste, which was kneaded for 30 min and then dried at 40 °C in an oven. The dried mass was then pulverized, passed through mesh no. 30, stored in vacuum desiccators (48 h), and passed through mesh no. 60 before packaging in an airtight container 14.

Determination of Solubility: Phase solubility was performed as described by Higuchi and Connors. Excess amounts of solid dispersion were added to 25 ml phosphate buffer (pH 7.4) taken in a stopper conical flasks, and the mixture was shaken for 24 h in a rotary flask shaker. After shaking to achieve attain an equilibrium, 2 ml aliquots were withdrawn at 1 hr intervals and filtered through Whatman filter paper no 40. The filtrate was analyzed spectro-photometrically at 265 nm. Shaking was continued until three consecutive reading was the same 14.

Fourier Transforms Infrared Spectroscopy: Infrared spectra of pure Famotidine, carriers, and solid dispersions were recorded using the FTIR spectrometer (Thermo Nicolet 380, USA) to ascertain the presence of different functional groups. A small amount of the powdered solid (1-2 mg) was added to pure potassium bromide powder and grounded up as fine as possible. This was then placed in a small die and put under pressure mechanically to form KBr pellet. Pellet was then scanned in the range from 400 to 4000 cm-1 15.

Differential Scanning Calorimetry: The melting behavior of the pure drug, carrier, and solid dispersions was evaluated by using DSC instrument (DSC Mettler Tolado). Samples were heated under nitrogen atmosphere on an aluminum pan at a rate of 10 °C/min. over the temperature range of 30 to 300 °C 16.

In-vitro Dissolution Studies: Drug release studies were performed in triplicate using United States Pharmacopoeia Type II dissolution test apparatus, employing phosphate buffer (pH 7.4) as dissolution media at a temperature of 37 ± 0.5 °C and at a speed of 50 rpm. Dissolution studies were performed on the pure drug (4 mg) and the different solid dispersions containing an equivalent amount of drug. Aliquots of the periodically withdrawn samples (5 ml) were analyzed spectrophotometrically at 265nm and were replaced with an equal volume of dissolution medium 17.

Powder X-ray Diffraction Studies: XRD patterns were recorded using BRUKER-axs D8-ADVANCE, model generator Powder X-ray diffraction patterns were traced for Famotidine, various carriers, and solid dispersion. The position and intensities of diffraction peaks were considered for the identification and comparison of crystallinity of the drug or carrier 18.

RESULTS AND DISCUSSION: Three factors, i.e., the amount of drug and carriers (Kollidon and Povidone K30) were studied at two levels, and sixteen batches (F1-F16) of SDs were formulated using factorial design.

Differential Scanning Calorimetry: Famotidine exhibited a characteristic, sharp exothermic peak at 167.58 °C, which is associated with the melting point of the drug and indicates the crystalline nature of the drug; degradation was indicated by an endothermic peak at 124.2 °C. However, the characteristic exothermic peak, corresponding to drug melting, was broadened and shifted toward a higher temperature with reduced intensity in solid dispersions. DSC studies also showed that there no interaction between drug and carrier at a molecular level in solid dispersions. Indicate that the entire drug has been converted to its amorphous form. 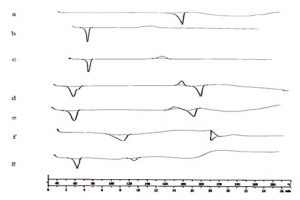 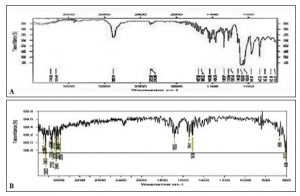 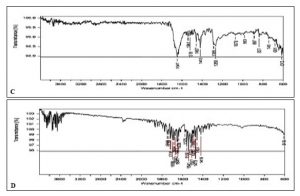 In-vitro Dissolution Studies: Studies of in-vitro dissolution rates allow a comparison to be made between pure drug, physical mixture, and solid dispersion. The in-vitro release profile of Famotidine from Kollidon and Povidone K30 solid dispersion (prepared by the kneading method) and physical mixture formulations are shown In vitro dissolution studies in Table 2 and 3, and the graph for the comparison of the cumulative percent release is illustrated in Fig. 5 and 6. According to observations, drug release was increased with increasing the concentration of both polymer (i.e., Kollidon and Povidone K30) up to a certain limit, and after that, then it almost becomes constant. Drug release from SDs and physical mixtures was faster than that from the pure drug. The dissolution of the drug from solid dispersion was found to be faster than that from physical mixtures; this may be due to the molecular and colloidal dispersion of drug in the hydrophilic carrier matrix. Among the formulations, batch F4 has shown maximum dissolution efficiencies of 98.00% after 30 min.

Scanning Electron Microscopy: SEM scanning electron micrographs of pure Famotidine, pure Kollidon and SDs (F4) are shown in Fig. 8. Famotidine was present in a crystal form. Kollidon was present in a globular form. The surface morphology of SDs indicates that Famotidine was adsorbed into the Kollidon and homogeneously dispersed into the polymer. SEM pictures images suggested that the individual surface properties of Famotidine and Kollidon were lost during kneading and the formation of effective SD systems.

CONCLUSION: The study shows that the dissolution rate of Famotidine can be enhanced to a great extent by solid dispersion technique using an industrially feasible kneading method, without any physical and chemical interaction.

ACKNOWLEDGEMENT: The authors are grateful to M/S Milan Laboratories (India) for their gift sample of the drug Famotidine.

CONFLICTS OF INTEREST: There is no conflict of interest for all authors.