ENHANCING THE ABSORPTION OF CURCUMINOIDS FROM FORMULATED TURMERIC EXTRACTS

ENHANCING THE ABSORPTION OF CURCUMINOIDS FROM FORMULATED TURMERIC EXTRACTS

INTRODUCTION: India is well-known for its rich history for using plants for medicinal purposes. Turmeric (Curcuma longa Linn) is a medicinal plant extensively used in Ayurveda, Unani and Siddha medicine as home remedy for various diseases1, 2.Curcuma Longa., botanically related to ginger (Zingiberaceae family), is a perennial plant having a short stem with large oblong leaves and bears ovate, pyriform or oblong rhizomes, which are often branched and brownish yellow in colour.

Turmeric is used as a dietary spice, coloring agent in foods, textiles and in the treatment of various ailments in Asian countries. It is widely used in traditional medicine to cure bilinary disorders, anorexia, cough, diabetic wounds, hepatic disorders, rheumatism, sinusitis 3. It is also considered as auspicious and is a part of religious rituals. Turmeric paste in slaked lime is a popular home remedy for the treatment of inflammation and wounds. For centuries curcumin has been used at doses up to 100mg/day. Recent phase I clinical trails indicate the human beings can tolerate a dose as high as 8g/day with no side effects 4.

This vibrant yellow spice has a long history of use in traditional medicines of China and India. The rhizome of turmeric has been crushed into a powder and used in Asian cookery, medicine, cosmetics, and fabric dying for more than 2000 years. Early European explorers to the Asian continent introduced this important spice to the Western world in the 14th century 5. As part of the ancient Indian medical system, Ayurveda, a poultice of turmeric paste is used to treat common eye infections, to dress wounds, treat bites, burns, acne and various skin diseases.

In Northern India, women are given a tonic of fresh turmeric paste with powder of dried ginger roots and honey in a glass of hot milk twice daily after child birth. Powdered turmeric is taken with boiled milk to cure cough and related respiratory ailments and roasted turmeric is an ingredient used as an anti-dysenteric for children 6. This ancient remedy is also used to treat dental diseases, digestive disorders such as dyspepsia and acidity, indigestion, flatulence, ulcers, as well to alleviate the hallucinatory effects of hashish and other psychotropic drugs 7.

Curcumin is hydrophobic in nature and soluble in dimethylsulfoxide, acetone, and ethanol. It has absorption maxima around 420nm.When exposed to alkaline conditions, the colour of curcumin turns from yellow to deep red, the form in which it is used for various religious ceremonies. Under acidic conditions, the degradation of curcumin is much slower with less than 20% of total curcumin decomposed in 1 hour 8.

These approaches involve, the use of adjuvants like piperine that interferes with glucuronidation, the use of liposomal curcumin, converting curcumin to nano sized particles, the use of curcumin phospholipid complex and the use of structural analogues of curcumin (e.g., EF-24). Despite the lower bioavailability, therapeutic efficacy of curcumin against various human diseases, including cancer, cardiovascular diseases, diabetes, arthritis, neurological diseases and Crohn’s disease, has been documented. Enhanced bioavailability of curcumin in the near future is likely to bring this promising natural product to the forefront of therapeutic agents for treatment of most degenerative diseases 10.

Although curcumin has been isolated in the 19th century; extracts of the rhizomes of Curcuma longa have been in use from the Vedic ages. Some of the medicinal application of turmeric includes to controlling anaemia, atherosclerosis, diabetes, oedema, haemorrhoids, hepatitis, hysteria, indigestion, inflammation, skin disease, urinary disease, wound and bruise healing, psoriasis, anorexia, cough, liver disorders, rheumatism, sinusitis 11.Being a polyphenol, curcumin is an antioxidant, preventing cell and tissue destruction due to free radical activity.

Hence it helps to prevent or retard various cardio-vascular, viral and other chronic diseases like arthritis, cancer and AIDS by neutralizing the existing free radicals 12. Curcumin on intake depletes substance P, a neurotransmitter of pain impulses in the nerve endings and potentiates adrenal glands which produce anti-inflammatory hormones .When used orally; curcumin has several effects on body like inhibiting leukotriene formulation and platelet aggregation promoting fibrinolysis (tissue regeneration) and stabilizing the cell membranes 13. Pharmaco kinetics studies in rats indicate that the absorption of pure curcumin from gastro intestinal tract is about 60 to 65 percent after administration of a single oral dose of 400mg/kg 14.

As many other plant materials, there are differences in the curcumin content for the Curcuma longa from different geographical regions and it could be due to hybridization with other Curcuma species which could be important fact to choose the plant with higher content of curcumin 19. Mixture of curcumin with other antimicrobial agents is used for the development of antimicrobial skin gels and emulsions with improved skin protection and wound dressing properties 20.

The synergistic activity of curcuminoids and ampicillin combination demonstrated pronounced reduction in the MIC of ampicillin against either clinical strain or Staphylococcus aureus ATCC 25923 strain. Bacteriocin subtilosin isolated from Bacillus amyloliquefaciens in combination with encapsulated curcumin revealed partial synergism against wild-type and nisin sensitive strains of Listeria monocytogenes Scott A 22. Strongly bound metal complexes to antimicrobial agents are introduced as another possible way for synergistic activity of respective antimicrobial agents through elevation of the binding effect of them to the bacterial walls. Complexes of curcumin with cobalt nanoparticles showed increased antibacterial activity against E.coli 23.

In another in situ investigation, the synergistic effect of curcumin encapsulated chitosan-[poly (vinyl alcohol)] silver nanocomposite films was shown. The novel antimicrobial films with pronounced antimicrobial exhibition against E. coli proved to be potential antibacterial material for treating infections or wound dressing 25. It has been demonstrated that curcumin as a plant derivative has a wide range of antiviral activity against different viruses. Inosine monophosphate dehydrogenase (IMPDH) enzyme due to rate-limiting activity in the de novo synthesis of guanine nucleotides is suggested as a therapeutic target for antiviral and anticancer compounds. Among the 15 different polyphenols, curcumin through inhibitory activity against IMPDH effect in either noncompetitive or competitive manner is suggested as a potent antiviral compound via this process 26. Curcumin was tradionally utilized for its preventive action against tumorigenesis, oxidation, inflammation, apoptosis, hyperlipemia and in the treatment of Alzheimer’s disease by multiple site targeted therapy 27, 28.

Due to extensive traditional use of turmeric in food products, various researches have been done in order to study the turmeric and curcumin with the aspect of controlling fungal related spoilage and fungal pathogens. The study on addition of turmeric powder in plant tissue culture showed that turmeric at the 0.8 and 1.0g/L had appreciable inhibitory activity against fungal contaminations 29. One of the major complications during therapies against chronic asthma is oropharyngeal candidiasis.

Curcumin as a potential candidate for the treatment of candidosis with anti-inflammatory activity was studied in a murine model of asthma. Oral administrator of curcumin is more effective than dexamethasone in reducing fungal burden in BALB/c mice. It also significantly decreased pathological changes in asthma 30. The optimum potential of curcumin is limited because of poor oral bioavailability and insufficient solubility in aqueous solvents leading to poor absorption, fast metabolism, and quick systemic elimination 31.

Although curcumin is poorly absorbed after ingestion, multiple studies have suggested that even low levels of physiologically achievable concentrations of curcumin may be sufficient for its chemopreventive and chemotherapeutic activity. Thus, curcumin regulates multiple targets (multi targeted therapy), which is needed for the treatment of most diseases, it is inexpensive and has been found to be safe in human clinical trials.

In spite of its efficacy and safety, curcumin has not yet been approved as a therapeutic agent This gap between the high level of many pre-clinical studies and the limitation of its right clinical use due to poor aqueous solubility, together with low bioavailability, lead to many uncertainties of its therapeutic effect in the Western population 32. The present study gives a comparative data of the bio-absorption of two different turmeric formulations in comparison with regular turmeric extract.

The present study protocol has been inspected in the spirit of OECD principles of Good Laboratory Practices {ENV/MC/CHEM (98)17:1997}, reviewed and approved by Institutional Animal Ethics committee (IAEC) of CARe Keralam Ltd.

All solvents and chemicals used were of AR/HPLC grade and obtained from Merck (Mumbai, India).The reference curcuminoids were purchased from Chromadex Company USA.

The animal species, Wistar albino rats were collected from Veterinary University, Mannuthi, Thrissur, Kerala, India. Female Albino rats which were nulliparous and non-pregnant weighing 150-210g with 8 to 11 weeks age were used in the study. Single animal was housed in a standard polysulphonate cage under standard laboratory conditions which include air conditioned with adequate fresh air supply with IVC system (Air changes 15 per hour),room temperature 21°C to 24°C, relative humidity 57-65% with 12 hours light and 12 hours dark cycle. Water and feed were given ad-libitum.

TABLE 1: SEGREGATIONS OF RATS FOR THE STUDY

Curcumin facilitates bile acid secretion which enhances the digestion of lipids and proteins and it eliminates excess cholesterol out of the liver. Curcumin is a pharmacologically safe component - without any side effects with various medicinal properties like anti-carcinogenic ,anti-inflammatory & anti-oxidant activities. The present study revealed  the poor absorption of curcuminoids by albino rats from regular turmeric extract was 68 to 72% only in three doses where as the absorption of curcuminoids of two turmeric extract formulations I and II has 97 to 99% and 99.6 to 99.7% respectively.

Values are expressed as mean ± SEM,

Group II-X was compared with Group I (5% Tween 80 in distilled water).

TMF I – Turmeric extract formulation I

TABLE 4: PERCENTAGE OF CURCUMINOIDS ABSORBED IN TEST SPECIES FOR TURMERIC FORMULATION I (TMF I) 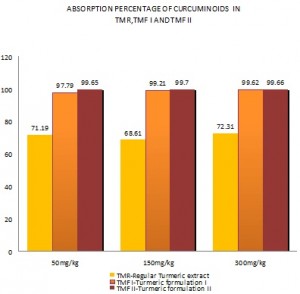 FIG.1: ABSORPTION PERCENTAGE OF CURCUMINOIDS IN TMR, TMF I AND TMF II

ACKNOWLEDGEMENTS: Authors are thankful to the R&D staffs and management of AVT Natural Products limited and the staffs of CARe KERALAM for providing laboratory facilities.