ABSTRACT: Penicillin antibiotics have been the main-stay armamentarium in the fight against bacterial diseases due to their availability and ease of use. Penicillin resistance has been attributed to modification of penicillin-binding proteins, production of β-lactamases, overexpression of efflux pumps and reduced permeability. In the past 10 years, research was centred on Gram-positive bacteria, particularly Methicillin-Resistant Staphylococcus aureus (MRSA). The key determinant of resistance in MRSA strains is the penicillin-binding protein (PBP2a). Currently, the production of β-lactamases by Gram-negative bacteria has garnered a degree of attention that seems to be rising rapidly. Gram-negative bacteria pose the greatest risk to public health because of the global emergence and spread of metallo-β-lactamases, including Imipenemase (IMP-types), Verona integrin-encoded-metallo-β–lactamases (VIM-types) and New Delhi metallo-β-lactamases (NDM-types). Not only is the increase in resistance of Gram-negative bacteria to beta-lactams faster than in Gram-positive bacteria, but also there are no current and developmental antibiotics active against metallo-β-lactamase-producing Gram-negative bacteria. This review critically examines the current issues in beta-lactamases responsible for penicillins resistance in relation to the current clinically important bacteria pathogens.

INTRODUCTION: Penicillin antibiotics have been major agents in the treatment of most bacterial infections since their introduction in 1941. They mainly act by inhibiting the transpeptidases (penicillin binding proteins-PBPs) which are responsible for the cross-linkage of the peptidoglycan layer of the bacterial cell wall 1.  Bacterial resistance to penicillins is mainly as a result of the production of beta-lactamases or by modification and/ or production of defective penicillin-binding proteins.

The modification or inhibition of PBPs could then lead to reduced cell wall permeability and increase in efflux pumps activity. The modification of target site is the most frequent resistance mechanism in Gram-positive cocci such as MRSA, penicillin-resistant Streptococcus pneumoniae, and penicillin-resistant Neisseria gonorrhoeae. Resistance in MRSA is as a result of the production a low affinity PBP2a (Fig. 1) whereas alteration in PBP2b is the major cause of penicillin resistance in Streptococcus pneumoniae 1.

In contrast, penicillin resistance in Gram-negative bacteria is the production of intrinsic or horizontally acquired beta-lactamases, which destroys the amide bond of the beta-lactam ring of penicillins rendering them ineffective 2. This poses serious threat to public health and a concerted global action is required to contain this emerging antibiotics resistance 29, 30, 31.

In the past 10 years, research has been focused on Gram-positive bacteria, particularly MRSA which are resistant to penicillins as a result of the presence of PBP2a 1. Currently, production of β-lactamases by Gram-negative bacteria has garnered a degree of attention that seems to be rising rapidly. However, the most significant contributory factor to penicillins resistance in bacteria is “the enzymatic inactivation." This review critically examines the current clinically relevant issues on penicillins resistance in order to evaluate the degree of risks posed by both Gram-positive and Gram-negative bacteria to global public health. 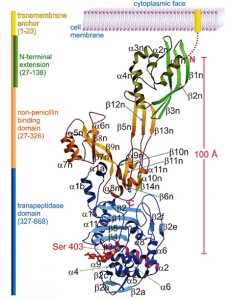 Generally, β-lactamases are a group of enzymes that hydrolyses β-lactam antibiotics by opening of the β-lactam ring and turning the antibiotic inactive 3. There are two predominantly β-lactamases classification schemes:

However, structural β-lactamase classification scheme provides a much comprehensive and encompassing format for classifying new and emerging enzymes. This is because enzymes continue to evolve but through use of new molecular techniques such as Polymerase Chain Reaction (PCR) and other methods of genetic analysis, they can be discovered and subsequently classified. Of particular concern here are the classes of enzymes that readily confer resistance to penicillins and other structurally related antibiotics in the Ambler classification and pathogens of clinical relevance. 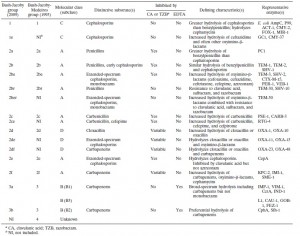 (i). Haemophilus influenza: Haemophilus influenzae is one of the major bacteria causing opportunistic infections in children, including tonsillitis, sinusitis, pneumonia, epiglottitis, meningitis and sepsis. The introduction of Hib conjugate vaccine in developed countries has reduced the morbidity and mortality linked to H. influenzae. In developing countries where the Hib vaccine is not readily available, H. influenzae is still a frequent cause of morbidity and mortality, especially in children less than 5 years of age 2. In addition, the wide spread use of pneumococcal conjugate vaccine in children has led to a sudden increase in pneumonia caused by non-typeable H. influenzae.

Therefore, penicillin antibiotic medication became the last resort for the treatment of these infections. This sudden increase in resistance is thought to be caused by the production of β-lactamases, a major resistance mechanism in H. influenzae. The β-lactamase producing rate varies worldwide. The β-lactamase-producing strains of H. influenzae have been shown to be 42% in USA, 35.8% in Kenya, 52.4% in Korea, 55% in Taiwan, 48.5% in Thailand and 35.8% in China 2. H. influenzae resistance to ampicillin has been linked to the β-lactamase-producing genes, blaTEM-1 and blaROB-1 2. Thus, the resistance of this opportunistic bacterium to penicillins is enhanced leading to increase in morbidity and mortality associated with its infection.

These are potential risks factors for the transmission of resistant ESBL-producing bacteria and antibiotic-resistance genes to humans through the food chain. It could also serve as a source for the outbreak of multidrug resistant pathogens in the human population since most of the resistance genes are plasmid encoded. Besides these, CTM-M and SHV extended-spectrum β–lactamases have been identified in E. coli isolates from dogs and cats 11 and CMY-2 and CTX-M-15 extended-spectrum β –lactamases have been found in E. coli from wild birds (seagull and pelican faeces) in USA12. Extended-spectrum-β-lactamase-producing and plasmid-mediated AmpC β –lactamase-producing E. coli from dogs have also been reported in South Korea 13 whereas multi-drug resistant E. coli producing extended-spectrum β-lactamases have been isolated from the faeces of wild animals in central Europe 14. ces of wild animals in central Europe 14. The colonisation of companion animals, wild animals and birds by resistant E. coli can become important reservoirs and vectors for human infection and the possibility of transferring resistance by conjugation to human strains is unavoidable. 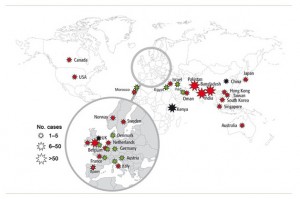 DISCUSSION: Even though there was an increased attention on resistant Gram-positive organisms such as MRSA, Penicillin-resistant Streptococcus pneumoniae, and vancomycin-resistant Enterococcus species in the past 10 years, 15 there is now a continuous decline of MRSA resistance, especially in UK 5. This decrease in infections by resistant Gram-positive organisms in the UK is attributed to the implementation of different programmes, including hand washing by hospital staff as well as enhanced surveillance of MRSA in hospitals. The mecA gene acquired by MRSA is responsible for the expression of PBP2a which has low affinity to beta-lactam antibiotics and penicillins. Penicillins PBP1a, PBP2x and PBP2b are also known to be responsible for penicillin resistance in Streptococcus pneumoniae 1.

The spread of multidrug-resistant Gram negative bacteria, especially the Enterobacteriaceae are a major threat to public health 15. This is because of the global spread of resistance genes among Gram-negative bacteria through horizontal gene transfer mainly mediated by plasmids, transposons and integrons 16. The emergence of metallo-β-lactamase-producing Pseudomonas aeruginosa, Klebsiella pneumoniae and Escherichia coli, and their isolation from life-threatening infections, has increased globally.

Metallo-β-lactamases are mainly of two types; Imipenemase (IMP) and Verona integrin-encoded metallo-β-lactamases (VIM). The enzymes of the IMP-type metallo-β-lactamase were first described in a strain of Serratia marcescens from Japan and they were able to hydrolyse all β-lactams, except monobactams 17. The IMP-type metallo-β-lactamases have been identified in Pseudomonas aeruginosa, Acinetobacter baumannii and Klebsiella pneumoniae and reported worldwide 5. The VIM-type was described in an isolate of Pseudomonas aeruginosa in Italy, also hydrolyses all β-lactams, except monobactams 20. Several VIM-type enzymes; VIM-1, VIM-2, VIM-3, VIM-4, VIM-5, VIM-6 and VIM-7 have been discovered in P. aeruginosa, K. pneumoniae, and E. coli isolates worldwide (Fig.3), with high incidence in Europe and Far East 7, 20.

In a recent study in Thailand, Piyakul et al. 20 reported the prevalence of 17.3% of P. aeruginosa-producing metallo-β-lactamases with both IMP-14 and VIM-2 enzymes. They further reported that all the IMP-14 strains were identical or closely related suggesting clonal dissemination.

The major challenge in the antibiotics armamentarium is the emergence of New Delhi Metallo-β-lactamases (NDM) in Enterobacteriaceae. NDM-1 was first detected in a strain of Klebsiella pneumoniae isolated in 2008 in a patient returning to Sweden from India, where NDM-1 is widespread in Enterobacteriaceae 7. Kumarasamy et al. 15 identified 44 isolates with NDM-1 in Chennai, 26 in Haryana, 37 in the UK, and 73 in other sites in India and Pakistan even though NDM-1 was mostly found among Escherichia coli (36) and Klebsiella pneumoniae (111).

The 37 isolates with NDM-1 in UK were identified as K. pneumoniae (21), E. coli (7), Enterobacter spp. (5), Citrobacter freundii (2), Morganella morganii (1) and Providencia spp. (1). These isolates were from urine, blood, burn or wound swab, sputum, central line tip and throat swab. It is disturbing as most of the Indian isolates from Chennai and Haryana were from community-acquired infections, suggesting that blaNDM-1 is widespread in the environment. This is corroborated by the isolation of NDM-1 β-lactamase-producing bacteria from 2 of 50 (4%) water and 51 of 171 (30%) sewage seepage samples in India indicating that the environment can be a potential source for dissemination 36.

Since India act as a medical tourism centre for Europeans, Americans and Africans, blaNDM-1 will likely spread worldwide. This is true because Multidrug-resistant Klebsiella pneumoniae and Escherichia coli isolates harboring New Delhi metallo-β-lactamase (NDM-1) have been isolated from a patient who had returned to Canada from India 21. In the same vein, Poirel et al. 26 reported seven carbapenem-resistant NDM-1-positive Klebsiella pneumoniae isolates recovered from patients hospitalised between 2007 and 2009 in different wards at a referral and tertiary care center in Nairobi, Kenya. In Australia, an E. coli isolate from the urine produced NDM-1 metallo-β-lactamase 16. In addition, this E. coli isolate expressed the extended-spectrum-β-lactamase CTX-M-15, together with two 16S rRNA methylases, namely, ArmA and RmtB, conferring a high level of resistance to aminoglycosides. Similarly, K. pneumoniae-producing NDM-1 which was also carrying genes for CTX-M 15, TEM-1 and SHV-11 has been reported in Malaysia 27 while K. pneumoniae-producing NDM-1 was detected in South Africa 28.

The dissemination of this novel carbapenemase gene is considered a serious threat since the reservoir of NDM-1 producers is at least in part related to the Indian subcontinent, which is inhabited by the second-largest population in the world and where NDM-1 producers are reported also in community-acquired infections. These NDM-1 variants have been shown to possess high hydrolytic activity to carbapenems and various cephalosporins 25. Currently, seven variants of NDM (NDM-1 to -7) have been detected in various countries 37. 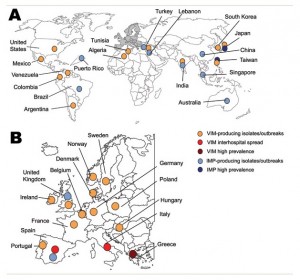 Despite the widespread discovery of NDM-1, NDM-2-producing A. baumannii isolates have been reported from Egypt and Israel 22, 23. NDM-2 differs from NDM-1 by a single amino acid substitution

(Pro28Ala) located in the leader peptide of the enzyme 23. In contrast to the spread of NDM-1 which is associated with travel to the Indian subcontinent, the five (5) A. baumannii isolates producing NDM-2 enzymes reported in Israel were not associated with international travel. Consequently, there is a possibility for the NDM-2 to spread globally since Israel is a country where many Christians from different parts of the world sojourn for pilgrimage. In addition, NDM-4 and NDM-5 have been reported from Escherichia coli isolates from United Kingdom, India and Japan 24, 25, 30. Another variant, NDM-6 with a point mutation at position 698 (C to T) was identified in an E. coli isolate in New Zealand 38 whereas NDM-7 have been reported in Germany and this differ from NDM-1 as a result of mutations at positions 388 (G to A) and 460 (A to C) corresponding to amino acid substitutions Asp130Asn and Met154Leu, respectively 39.

The continuous spread of metallo-β-lactamases across Enterobacteriaceae and Pseudomonas aeruginosa is worrisome because there is no current drug for the management of infections caused by these super bugs, although colistin, fosfomycin and tigecycline has shown promising activity 40, 41, 42.

CONCLUSION: Bacteria from clinical and non-clinical environments are becoming increasingly resistant to conventional antibiotics, including penicillins. Resistance to penicillins is usually due to modification of target site, inactivation of the beta-lactam ring, and/or presence of efflux pumps. In the past 10 years, concern was centred on Gram-positive bacteria, particularly meticillin-resistant Staphylococcus aureus, Streptococcus pneumoniae and vancomycin-resistant Enterococcus spp which are resistant as a result of modified target. Now, however, clinical microbiologists increasingly agree that multidrug resistant Gram-negative bacteria pose the greatest risk to public health as a result of the emergence of metallo-β-lactamases, including IMP-types, VIM-types and NDM-types. Not only is the increase in resistance of Gram-negative bacteria faster than in Gram-positive bacteria, but also there are no current and developmental antibiotics active against metallo-β-lactamase-producing Gram-negative bacteria.