ERYTHROCYTES AS A POTENTIAL CARRIER FOR CHRONIC SYSTEMIC DISEASES

ERYTHROCYTES AS A POTENTIAL CARRIER FOR CHRONIC SYSTEMIC DISEASES

ABSTRACT: Chronic systemic diseases are diseases which require long term drug therapy. Parenteral controlled drug delivery system is often used to treat these diseases. Vesicular bodies like liposome are commonly used as Parenteral controlled depot formulation.  It possess disadvantage that they are rapidly removed from body by phagocytosis because they are considered as hapten. So formulating a slow release depot formulation is a challenge for pharmaceutical scientist.  Erythrocytes as they are  derived from human body, they serves as a potential  carrier for loading drugs intended for chronic systemic diseases that require long term therapy. Erythrocytes unlike other carrier possess biocompatibility, biodegradability and have long circulation half-lives. They act as slow release depot formulation by following a zero order kinetic drug release profile and without being attack by the complement system, provided the method adopted for loading should not cause any structural deformity or disturbance in lipid packing.  This review will give an insight to those researchers who wish to work with erythrocyte for using it as a slow release depot formulation.

Administration of these drugs as long lasting parenteral depot is often followed in chronic systemic diseases 4. But the problem is that the vesicular bodies are rapidly cleared off by phagocytosis and RES (Reticulo-Endothelial System, now known as Mononuclear Phagocytic System) as they are treated to be haptens.

To avoid this problem, the cellular based drug delivery is adopted.  As the most abundant cells in all the vertebrates are erythrocytes or Red Blood Cell (RBC) they are used for this purpose.

The concept of encapsulating drug in erythrocyte first came in early 1970. The term carrier RBC was first introduced in 1979 by DeLoach` 5. From that onwards many researchers encapsulate drug in carrier erythrocyte for their suitability as parental controlled drug delivery by both in vitro and in vivo methods, unfortunately yet now no drug-loaded RBC is available in market probably because of the stability problem associated. However they are widely used for encapsulating drug and its efficiency as carrier for depot formulation is proven even by clinical trials 6.

These cells are not recognized by the macrophages system because RBC membrane contains many proteins like CD47, C8bp, HRP, MCP, CR1 etc. which protect RBC from being attack by the complement system 8, 9.

Methods used for loading drug into Erythrocytes: Blood is collected from suitable human candidate or suitable animal in a heparinized vaccute to prevent coagulation.  It is centrifuged to separate erythrocytes from plasma and leucocytes buffy coat. Separated upper plasma and buffy coat of leucocytes are removed by aspiration and replaced with the same volume of phosphate buffer saline. Then it is washed 4 times and resuspended in phosphate buffer saline to get a concentration of 2×109 cell/ ml 10.

There are various methods for loading drug in erythrocytes. But all the methods are not equally suitable for loading drugs to treat chronic systemic diseases. The method we adopt should be suitable for not to cause any structural change during the treatment. This can be confirmed by viewing under an electron microscope. Any plasma membrane deformity occurs during the loading processes may cause it recognized by the macrophages and they will be cleared off from the circulation.

Some of the methods adopted for the purpose are discussed below:

Deukie et al,noticed for the first time that the permeability of erythrocyte membrane is increased by the exposure of amphotericin B. Ketao and Hattori utilized this method to entrap the antineoplastic drug daunomycin in human and mouse erythrocytes 16.

The loaded erythrocytes thus obtained are then washed with cold PBS (Phosphate Buffer Saline) at 4oC. The cells are then resuspended in PBS. This method is important because the drug loaded to the erythrocyte by this method yields greater in vivo survival than other methods. Hence, used as a carrier for treating chronic systemic diseases, the various therapeutic agents which are encapsulated by this method include phosphotriesterase in murine erythrocytes 23.

After loading drug in erythrocyte, it should store properly to maintain the cell viability for its future use. Storage of loaded erythrocyte is a challenge faced by many researchers. Since it is a biological product, the in vitro stability is less. The most common storage media include Hanks Balanced salt solution and acid-citrate dextrose at 4oC; cells remain viable in terms of their physiologic and carrier characteristics for at least 2 weeks at this temperature 24.Many scientists use cross linking agents like glutraldehyde to stabilize the loaded erythrocyte 14, 15.

The addition of Ca2+ chelating agents or purine nucleosides improves circulation survival time of cells up on reinjection. It have been proved that RBC can be stored up to 11 weeks in alkaline additive solution (alkaline CPD pH = 8.7 which is made with trisodium citrate, dextrose and disodium phosphate 25, 26. Freeze drying (lyophilization) of loaded erythrocyte is now widely accepted. Powdered form so obtained after freeze drying is reconstitute using suitable vehicle before injection 11.

Drug content determination: Drug content is determined by deproteinized the loaded cells using methanol or acetonitrile followed by centrifugation. Then 1ml of the supernatant is pipette out (extract with methanol if necessary to reduce the interference by the proteins) and the drug content is estimated by suitable spectrophotometric and chromatographic method 5, 22.

In vitro Drug release and Hemoglobin content: The in vitro release of drugs and hemoglobin are monitored periodically from drug loaded erythrocytes. The cell suspension is stored at 40C in amber colored glass bottles. Periodically the supernatant are withdrawn using a hypodermic syringe equipped with 0.45 µm filter, deproteined using methanol or acetonitrile and the drug content were estimated. The supernatant of each sample after centrifugation is collected and assayed; % hemoglobin released is calculated by noting the absorbance at 540 nm 27- 30.

Osmotic Fragility test: In this test, both the loaded and unloaded erythrocytes are incubated with series of concentration of NaCl from hypotonic to isotonic. Then the percentage hemolysis is determined. Usually the resealed erythrocyte has slightly higher osmotic fragility than the normal cell. The % hemolysis is calculated by the formula;

Mean Corpuscular Volume: Conventionally it is calculated by the formula

Turbulence Shock: It is the measure of simulating destruction of loaded erythrocytes during injection. It is measured by passing erythrocyte suspension through a 23 gauge needle at flow rate of 10ml/min which is comparable to the flow rate of blood. The number of passes varies as a function of turbulence. The drug leakage is measured analytically. Drug loaded erythrocytes appears to be less resistant to turbulence indicating destruction of cells during injection 5.

Shape and Surface Morphology: It fairly gives information about the life span of erythrocytes after administration. The morphological examination of the loaded erythrocytes and the unloaded erythrocyte is compared using transmission electron microscopy (TEM), Scanning Electron microscopy (SEM). If there is significant difference in morphology long cell half-life would become a problem. The morphologic change occurs during loading produce RBC with biconcave (discocyte), uniconcave (stomatocyte), and spherocytic shape. The most fragile one is with spherocytic shape (fig. 1) 31. 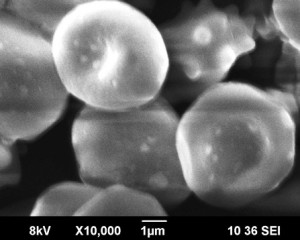 Fluorescent labeled annexin V-phosphotidyl serine complex is quantified by flow cytometer. Annexin V is a 35-36 kDa Ca2+ dependent phospholipid-binding protein that has a high affinity for PS, and binds to cells with exposed PS. The binding assay result will be provided by flow cytometry in a four quadrant table (Fig. 2). 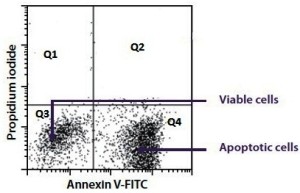 Quadrant 3(Q3): This quadrant shows the no: of cells that do not have affinity for Annexin, which means all cells are live and no exposure of PS.

Quadrant 4(Q4): Annexin V positive cell is quantified in this table. That means it gives information about the apoptotic cell or PS exposed erythrocytes.

Q1And Q2 have no role in determining the phospholipid asymmetry of RBC as these quadrants are meant for nucleus containing cells .This quadrants give positive results for propidium iodide dye which stains the nucleus. When phosphotidyl serine is exposed, the erythrocytes could not be used as a carrier for chronic systemic diseases 32, 33.

In vivo studies: In vivo studies mainly focused on the uptake of loaded erythrocytes by the RES system than any pharmacologic efficacy studies. Normally uptake by RES is not recommended for those carriers intended to treat chronic systemic disease. However after long journey through the circulation, the transbilayer orientation of phospholipid in RBC is disrupted and dummy ghost is cleared from circulation by this Reticulo endothelial system 17.

Recent development: Nanoerythrosomes, patented nanovesicles derived from red blood cell through extrusion, sonification or electrical break down method. In extrusion method erythrocyte ghosts are passed through polycarbonate membrane filter, which breaks down into smaller vesicles, having a diameter of about 100nm 34.

Recently, a RBC membrane derived vesicles with polymeric nanoparticles made from poly lactic-co-glycolic acid (PLGA), an FDA approved polymer, and the resulting nanoparticle has a core shell structure that consists of a PLGA core surrounded by a RBC formed shell.

In combining the advantages of RBC-based carrier with that of polymeric nanoparticles, this technology has the potential to enable the delivery of slow releasing drug which has long in vivo circulation half-life than that coated with PEG 35.

CONCLUSION: Even though stability problems and donor-recipient incompatibility is still a challenging problem faced when using erythrocytes as carrier, they offer potential advantage its peculiar zero order kinetics drug release and long circulation half-life compared to other novel vesicular drug delivery system. However, autologous erythrocyte loading and administration helps to reduce the chance of immunogenicity.

Recently, synthetic RBC was developed to overcome the challenges of stability problems and immunogenicity reaction when using erythrocyte as carrier. Hence erythrocytes can be used as carrier for treating diseases which require daily multiple dosing. Thus we can minimize many dose related side effects of majority of drugs used for chronic disease.