ABSTRACT:Lornoxicam (chlortenoxicam) is a non steroidal anti- inflammatory drug (NSAID) of the oxicam class with analgesic, anti-inflammatory and antipyretic properties. It is available in oral and parental dosage formulation. Lornoxicam is a Yellow or slightly yellow powder. It is slightly soluble in water, soluble in hydrochloric acid, slightly soluble in methanol. A simple spectrophotometric method was developed for the determination of lornoxicam in pharmaceutical tablet dosage form. Lornoxicam exhibiting λ max at 380 nm in mobile phase (phosphate buffer: methanol) in ratio of 50:50 and obeyed linearity in the concentration range of 1-20mcg. The proposed method was statistically validated.

INTRODUCTION: The scope of developing and validating analytical method is to ensure a suitable method for a particular analyte more specific, accurate and precise the main objective for that is to improve the condition and parameter, which should be followed in the development and validation 2. Lornoxicam (chlortenoxicam) is a non steroidal anti- inflammatory drug (NSAID) of the oxicam class with analgesic, anti-inflammatory, and antipyretic properties 1, 4.

No UV-Spectrophotometric method has been reported for estimation of lornoxicam in tablet dosage form. Hence, an attempt has been made to develop new spectrophotometry method for its estimation in pharmaceutical tablet dosage form with good accuracy, simplicity, and precision. In UV-Spectrophotometric method UV spectrum is set in 380 nm and blank is placed in the cuvettes, after setting zero transmittance the sample is placed in another cuvette for measuring the absorbance the sample.

EXPERIMENTAL: Absorbance measurements were made on Electronic India (EI) Spectrophotometer. Shimadzu BL-220H balance was used for weighing the sample. Commercially available tablets of the lornoxicam were procured from the local market and estimated.

Preparation of working standard solution and construction of calibration curve: The prepared stock solution was further diluted with mobile phase to get working standard solution of 1, 2, 4, 6, 8, and 10 mcg of lornoxicam to construct Beer’s law plot for the pure drug, the absorbance was measured at λ max at 380 nm, against mobile phase as blank .The standard graph was plotted by taking concentration of drug on X-axis and absorbance on Y-axis in the concentration range of 1-20 mcg.

Preparation of sample stock solution and working sample solution: Ten tablets were accurately weighed and average was calculated. The tablet were then crushed to obtain fine powder equivalent to about 8 mg of lornoxicam was transferred to 100 ml volumetric flask , added mobile phase and shaken for a while. The volume was made up to the mark with mobile phase and required dilutions were made from the sample stock solution.

Assay: The assay of the proposed method was ascertained by performing assay of the standard drug with reference to the sample drug and finding out the absorbance. From the absorbance percentage purity was calculated. The readings are shown in table 1.

SPECIFICITY: The specificity of the proposed method was ascertained by performing the placebo study. The placebo was obtained from the Primal healthcare equivalent to one tablet and the percent interference was carried out from these data’s 2, 3 (table 2).

Linearity: To establish linearity of the proposed methods, six separate series of solutions of lornoxicam (1-20 mcg) in mobile phase (phosphate buffer: methanol, 50:50) were prepared from the stock solutions and analyzed. Least square regression analysis was performed on the obtained data. Linearity data are shown in table 3 & 4 as follows:

Accuracy: To determine the accuracy of the proposed method, recovery studies were carried out by adding different amounts (80%, 100%, and 120%) of standard bulk sample of lornoxicam within the linearity range were taken and added to the pre-analyzed formulation of concentration 10 mcg and percentage recovery values are calculated 2, 3 (Table 5 & 6). 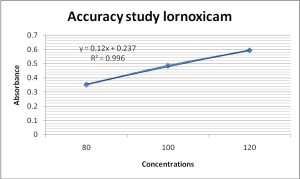 Precision: The precision of the proposed method was ascertained by determination of six replicates of same concentration of sample and standard for method precision and system precision.

System precision: The system precision of the proposed method was ascertained by determination of six replicates of same concentration of standard drug within the Beer’s range and finding out the absorbance. The mean absorbance, standard deviation, and %RSD were calculated 2, 3 (Table 7).

Method precision: The method precision of the proposed method was ascertained by determination of six replicates of same concentration of sample drug within the Beer’s range and finding out the absorbance. The absorbance, assay of drug, standard deviation, and %RSD were calculated (Table 8 & 9).

RESULT AND DISCUSION: From these characteristics of the proposed method, it was found that lornoxicam follow linearity within the concentration range of 1-20mcg. The table 8 and 9 indicated that the %RSD is less than 2, which shows that the system and method has good reproducibility. The result shown in accuracy table (5) and (6), it was found that the percentage recovery values of pure drug from the analyzed solution of formulation were in between 95.01 to 124 which indicates that the proposed method is accurate and also reveals that the commonly use excipients and additives in the pharmaceutical formulation were not interfering in the proposed method.

CONCLUSION: The proposed method was simple and reliable with good precision, accuracy, linearity and ruggedness. The proposed method is specific while estimating the commercial formulations without interference of the excipients and other additives. Hence, this method can be used for the routine determination of lornoxicam in pure and pharmaceutical formulation.

ACKNOWLEDGEMENT:  The Authors are sincerely thankful to Ranbaxy Pvt. Ltd., Gurgaon, for providing the gift sample of lornoxicam and also very much thankful to Mr. R. K. Abhilashi, Chairman, Abhilashi College of Pharmacy, for providing with the Facilities to carry out this work and also for his continuous support and encouragement.