ESTIMATION OF MANIDIPINE DIHYDROCHLORIDE BY A NEW RP-HPLC METHOD

ESTIMATION OF MANIDIPINE DIHYDROCHLORIDE BY A NEW RP-HPLC METHOD

A rapid reverse phase high performance liquid chromatographic method was developed for the estimation of Manidipine dihydrochloride in its pure form as well as in tablet dosage forms. Chromatography was carried out on an phenomenex C18 column (250´4.6mm, 5 µm), using a mixture of acetonitrile and water (80: 20 v/v) with pH adjusted to 3.5 with ortho phosphoric acid (0.1 % v/v)  as the mobile phase at a flow rate of 1.3 mL/min The detection wavelength is 230 nm. The retention time of the drug was 3.54 min. The method produced linear responses within concentration range of 25 to 125 µg/mL of Manidipine dihydrochloride. The method was found to be reproducible for analysis of the drug in tablet dosage forms.

A phenomenex C18 column (250´4.6mm and; 5 µm) was used for the separation. Detection was done using SPD 10A UV detector and the output signal was monitored and integrated using Shimadzu CLASS-VP Version 6.12 SPI software.

The pH was adjusted 3.0 using ortho phosphoric acid. Both acetonitrile and water were filtered through 0.45μ membrane filter and sonicated before use. The flow rate of mobile phase was maintained at 1.3 mL/min. The column temperature was maintained at 25+1o­­C. The detection was carried out at 230 nm.

Drug Solutions:About 20 mg ofManidipine dihydro- chloride was weighed accurately and dissolved in 10 mL of the mobile phase in a 20 mL volumetric flask. The solution was sonicated for 10 min and the volume was made up with a further quantity of the mobile phase to get 1mg/mL solution.

Working standard solution of Manidipine dihydro-chloride was prepared by taking 1 mL of the stock solution and diluting to 10 mL with the mobile phase in a 10mL volumetric flask to get 100 µg/mL solution. From the working standard solution dilutions ranging from 1 to 150 mg/mL were prepared in 10 mL volumetric flasks with the mobile phase. Each of the dilutions was injected 6 times in to the column and the corresponding chromatograms were obtained. From these chromatograms retention times and the area under the peak of the drug to that of the reference standard for each dilution was calculated. A relevant calibration curve was constructed with concentration on x-axis and area under the peak on y-axis.

MADIPLOT: The commercial samples of tablets containing the drug namely Madiplot  20 mg, (Takeda) were chosen for this purpose. The commercial samples of Manidipine dihydrochloride (20 tablets) were taken, triturated well and made it to fine powder. An equivalent weight of 10 mg powder is weighed accurately, dissolved in 5 mL of mobile phase, sonicated for 20 min and filtered through 0.45 µ membrane filters. It is further diluted with the mobile phase to get a concentration 1 mg/mL solution. It is further diluted with mobile phase to get 40 mg/mL.  Further, 20 mL of this prepared sample was injected 6 times and chromatographed. The average peak areas were calculated. The concentration of the drug was calculated from the regression equation obtained from the pure drug.

RESULTS AND DISCUSSION: The present study was carried out to develop a sensitive, precise and accurate HPLC method for the analysis of Manidipine dihydrochloride in pharmaceutical dosage forms. In order to effect separation of the drug and the reference under isocratic conditions, mixtures of acetonitrile and water in different combinations were tested as mobile phase on a phenomenex C18 column (250´4.6mm and; 5 µm). A binary mixture of acetonitrile and water (80: 20 v/v) (pH 3.0) was proved to be the most suitable of all combinations since the chromatographic peaks were better defined and resolved and almost free from tailing. The retention times obtained for Manidipine dihydrochloride was 3.58 min. A model chromatogram showing the separation of Manidipine dihydrochloride is given as Fig. 1. 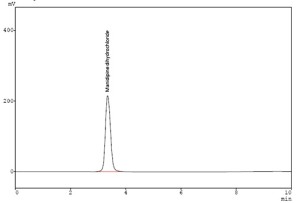 In order to test the linearity of the method, five dilutions of the working standard solutions of the drug in the range of 25 to 125 μg/mL were prepared. Each of the dilutions was injected six times into the column. The average ratio of peak area of Manidipine dihydro-chloride to that of the reference standard at different concentration levels were calculated (Table 1).

A good linear relationship (r=0.9988) was observed between the concentration of Manidipine dihydro-chloride and the respective ratio of peak areas (fig. 2). The regression equation computed for the curve was y= 104848X + 3211.3 (where y is the ratios of peak area of the drug to that of reference standard and x is the concentration of Manidipine dihydrochloride).

The method was duly validated by evaluation of the required parameters. When Manidipine dihydro-chloride solutions containing 20 to 60 μg/mL were analyzed by the proposed method in the intra and inter-day variation results, a low coefficient of variation was observed. This shows that the present HPLC method is highly precise. The recoveries of Manidipine dihydrochloride obtained from the pre-analyzed samples containing known amounts of added drug are shown in Table 2. About 99.88% of Manidipine dihydrochloride could be recovered from the pre-analyzed samples indicating the high accuracy of the proposed method.

The low coefficient of variation indicates the reproducibility of the assay of Manidipine dihydro-chloride in dosage forms. It can be concluded that the proposed HPLC method is sufficiently sensitive and reproducible for the analysis of Manidipine dihydro-chloride in formulations within a short analysis time. The method was duly validated by evaluation of the required parameters.

TABLE 1: CALIBRATION OF THE PROPOSED METHOD 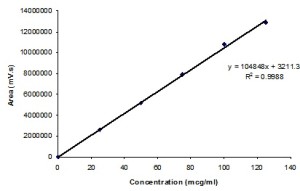 Precision: Precision is the level of repeatability of results as reported between samples analyzed on the same day (Intra-day) and samples run on three different days (Inter-day). To check the intra-day and inter-day variation of the method, solutions containing solutions containing 20, 40, and 60 mg/mL Manidipine dihydrochloride were subjected to the proposed HPLC method of analysis and the recoveries obtained were noted. The precision of the proposed method i.e. the intra and inter-day variations in the peak area of the drug solutions was calculated in terms of % RSD. Statistical evaluation revealed that relative standard deviation of drugs at different concentration levels for five injections was less than 2.0. (Intra day-0. 27, inter day-0.321).

Accuracy: Accuracy was determined by recovery study of Manidipine dihydrochloride. Known amount of standard Manidipine dihydrochloride was added into pre-analysed sample and subjected them to the proposed HPLC method. Results of recovery studies are shown in the study were carried out at three different concentration levels The results are shown in Table 2.

Robustness: The optimum HPLC conditions set for the proposed method has been slightly modified as a means to evaluate the method robustness. The small changes include the mobile phase ratio (±5), pH of the mobile phase (±0.1) the flow rate (±0.2), the detection wavelength (±3), and the column temperature (±2). From the results, it indicated that a selected number of factors remained unaffected by small variations of these parameters.

System Suitability: System suitability was carried out as per USP 29 on freshly prepared standard solution. For assessing system suitability, six replicates of working standard sample were injected and studied the parameters like plate number (N), tailing factor (K), resolution®, HETP, plates per meter and peak symmetry of samples 5. The results are shown in Table 3.

CONCLUSIONS: The isocratic RP-HPLC method developed for quantitative determination of Manidipine dihydrochloride is precise, accurate, and selective. The method was completely validated and satisfactory results were obtained for all the method validation data tested.

ACKNOWLEDGEMENTS: The authors are grateful thanks to Orchid Chemicals and Pharmaceuticals, Chennai, India for providing Manidipine dihydrochloride as a gift sample.