Saroj Institute of Technology and Management4, Lucknow (UP), India

Ofloxacin is a fluoroquinolone antibiotic considered to be a second-generation fluoroquinolone. Ofloxacin is administered by oral, intravenous or topical (eye and ear drop) route. It is used as antibacterial for the treatment of various diseases like chronic bronchitis, pneumonia, urethritis, cervicitis, urinary tract infections, prostatitis, uncomplicated urethral and cervical gonorrhea. Ofloxacin is a pale yellow or bright yellow, crystalline powder. It is slightly soluble in water, soluble in glacial acetic acid, slightly soluble or soluble in methylene chloride, slightly soluble in methanol. A simple Nanodrop spectrophotometric method was developed for the determination of Ofloxacin in pure and its pharmaceutical tablet dosage form. Ofloxacin exhibiting λ max at 296 nm in mobile phase (0.05 M Phosphate buffer: Acetonitrile) in ratio of 65:35 and obeyed linearity in the concentration range of 1- 150 ppm. The proposed method was statistically validated.

INTRODUCTION: The scope of developing and validating analytical methods is to ensure a suitable method for a particular analyte more specific, accurate and precise. The main objective for that is to improve the conditions and parameters, which should be followed in the development and validation. Chemically Ofloxacin is fluoroquinolone. It is a second-generation fluoroquinolone antibiotic drug and is used as antibacterial for treatment of various diseases. 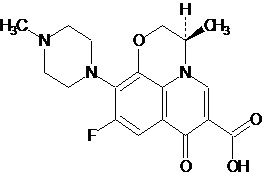 The Nanodrop ND-1000 is a full-spectrum spectrophotometer (UV and visible spectrum, 220-750 nm) for measuring the absorbance the sample droplet is held in place by surface tension when it is slightly compressed between the pedestal and the sample arm; this generates the defined pathway of 1 mm. The spectrum measurement is then performed with two optical fibers installed in the pedestal (emitting light of a Xenon lamp) and the sample arm (spectrometer with linear CCD array). Quantification is performed based on the spectrum measurement at the defined pathway of 1 mm. Unlike traditional spectrophotometers, the Nanodrop does not require cuvettes or capillaries. Instead, the sample is pipette directly onto the measurement pedestal.

Instrumentation: Spectral and absorbance measurements were made on Nanodrop spectrophotometer. Denver TB-215D balance was used for weighing the samples. Commercially available tablets of Ofloxacin were procured from the local market and estimated.

Scanning and determination of maximum wavelength (lmax): In order to ascertain the wavelength of maximum absorption (λ max) of the drug, different solutions of the drug (40 ppm and 60 ppm) in mobile phase (0.05 M Phosphate buffer: ACN) were scanned using Nanodrop spectrophotometer within the wavelength region of 220 – 700 nm against mobile phase as blank. The resulting spectra are shown below (Fig. 1, 2 and 3) and the absorption curve showed characteristic absorption maxima at 296 nm for Ofloxacin.

Preparation of Standard Stock Solutions: Standard stock solution was prepared by dissolving 10 mg of Ofloxacin in 10 ml of mobile phase to get concentration of 1mg/ml (1000 ppm) solutions.

Preparation of working standard solutions and construction of standard graph: The prepared stock solution was further diluted with mobile phase (pH-5.04) to get working standard solutions of 1, 2, 4, 6, 8, 10, 12, 20, 40, 60, 80, 100, 120 and 150 ppm of Ofloxacin to construct Beer’s law plot for pure drug, the absorbance was measured at λ max 296 nm, against mobile phase (pH-5.04) as blank. The results are shown in table (1). The standard graph was plotted by taking concentration of drug on X-axis and absorbance on Y-axis and is shown fig 4. The drug has obeyed Beer’s law in the concentration range of 1-150 ppm. The linearity curve data is shown in table (2).

Preparation of sample stock solutions and working sample solutions: Ten tablets were accurately weighed and average was calculated. The tablets were then crushed to obtain fine powder. An accurately weighed quantity of tablet powder equivalent to about 10.0 mg of Ofloxacin was transferred to 10 ml volumetric flask, add 5 ml of mobile phase and shaken for 10 min. The volume was made up to the mark with mobile phase and required dilutions were made from sample stock solution. The recovery study from formation is shown in table (3). 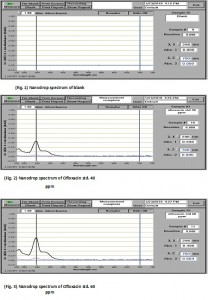 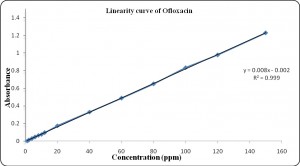 Table 3: Recovery from the formulation

Accuracy: To determine the accuracy of the proposed method, recovery studies were carried out by adding different amounts (80%, 100%, and 120%) of bulk samples of Ofloxacin within the linearity range were taken and added to the pre-analyzed formulation of concentration 10 ppm. From that percentage recovery values were calculated. The results were shown in Table (4). The response obtained for the various concentrations is plotted and observed to be linear (correlation coefficient – 0.999 for Ofloxacin). The graphical representation of accuracy studies is depicted in Figure 5.

Precision: The precision of the proposed method was ascertained by actual determination of six replicates of fixed concentration of the drug within the Beer’s range and finding out the absorbance by the proposed method. From this absorbance, mean, standard deviation and % RSD was calculated. The readings are shown in table 6.