ABSTRACT: Bryophytes- the small, slow growing group of plants is stockroom of naturally occurring materials. They contain a high number of biologically active compounds, however their use as a natural fungicides is negligible. In the recent years bryophytes has emerged as a potential biopharming tool for production of complex biopharmaceutiticals. In order to evaluate potential use of bryophytes as an antifungal compounds their basic chemical contents and the secondary metabolite profile was determined. Among secondary metabolites flavonoids are a group of polyphenolic compounds, which are widely distributed throughout the plant kingdom. Flavonoids like Rutin and quercetin possess many biochemical effects. An HPLC method was developed for the estimation of quercetin from methanol extract of Philonotis revoluta bryophyte. The results of the phytochemical screening using different extracts revealed the presence of alkaloids, flavonoids, phenols, etc. in the moss plant and investigated against plant pathogenic fungi using different parameters. Results showed significant reduction in pathogenic growth.

INTRODUCTION: Bryophytes are the second largest group in the plant kingdom with about 25’000 bryophyte species and they can be found in any kind of ecosystems 1-2. In comparison with higher plants the use of bryophytes for human consumption is negligible due to their low caloric value 3 and poor organoleptic properties. Recent research demonstrates a presence of a large number of biologically active substances in the composition of bryophytes. More specifically bryophytes demonstrate antibacterial, antifungal, antiviral activities, antioxidant, antiplatelet, antithrombin, insecticidal, neuroprotective activities, as well as cytoxicityin respect to cancer cells 4- 5.

Biological control of plant diseases would help in preventing increase of pathogen population and also health hazards because of the use of various synthetic chemicals. Biological control through the use of plant extracts is a potential, non-chemical means of controlling plant diseases by reducing inoculum level of pathogen. There are reports of studies performed in the last century regarding the chemical composition of bryophytes 6.  However, in the past two decades, biologists, chemists and pharmacologists have been interested in this group of plants. The aim of this work was to analyze phytochemically the extract of the bryophyte Philonotis rvoluta- a moss and to investigate its potential on the plant pathogen

Collection of plant material and extract preparation: The plant material was collected in rainy season from Mt. Abu district Sirohi (Rajasthan) India from different localities in both vegetative and sporophytic phages.

For methanolic extract preparation, plant material weighted was grinded in mortar and pestle with equal amount of methanol till the formation of fine paste, then it was centrifuged and filtered. This filtrate was used as (100%) crude extract then it was serially diluted by double distilled water to prepare various concentrations from 10-100 per cent. The same method was adopted for acetone and aqueous extract preparation. Except grinding the plant material with acetone and water respectively instead of methanol.

Bioassay of antifungal activity: The test fungi Helminthosporium turcicum was bioassayed by different parameters like colony diameter and fresh weight of test fungi in different concentrations of aqueous, acetonic and methanolic extracts.

Colony diameter and fresh weight assay: The method of poisoned food technique 8 was followed. Autoclaved media and crude extracts of different concentrations were poured in petriplates in 1:1 ratio. After solidification, an agar block containing growing mycelium of test fungi were placed in four corners of petriplates. Different concentrations were used with three replications. Extract free medium served as control. Colony diameter and fresh weight were measured after 72 hrs. Per cent inhibition of mycelial growth was calculated by the formula 9.

I = Per cent inhibition

Phytochemical Analysis: The extracts of Philonotis revoluta were subjected to various phytochemical tests by various methods 10 to detect the presence or absence of certain bioactive compounds such as flavonoids, sterols, saponins, anthroquinones and cardiac glycosides in the plant extracts.

HPLC Analysis: HPLC (High performance liquid chromatography) was done for the identification of specific metabolite from methanolic extract of P. revoluta. For identification of quercetin present in the moss, standard sample solution of quercetin was run along with the plant extracts, the peak of the analyte was confirmed by comparing it’s retention time with that of reference standard 11. All the HPLC experiments were perfomed at SICART (Sophisticated instrumentation centre for applied research and testing) Anand, Gujarat.

Methanolic extract of Philonotis revoluta was analyzed for the presence of secondary metabolites using a perkin elmer series 200 HPLC system Further detail is as follows.

RESULTS AND DISCUSSION: HPLC analysis of Philonotis revoluta methanolic extract showed the presence of quercetin as a principle secondary metabolite. Antifungal activity of Philonotis revoluta extract against Helminthosporium turcicum was assayed   and observations revealed that significant reduction in the growth of test fungi was reported in all concentration ranging from 10-100 per cent. Among the three extracts tested, methanolic extract at 100 per cent concentration caused significant inhibition of growth. 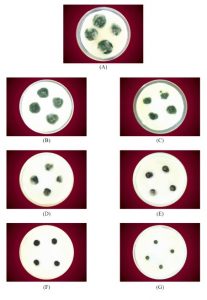 FIG. 1: COLONY DIAMETER, FRESH WEIGHT AND PER CENT INHIBITION OF MYCELIAL GROWTH OF HELMINTHOSPORIUM TURCICUM IN THE CONTROL (A); 10(B), 20(C), 40(D), 60(E), 80(F) AND 100 (G) PER CENT CONCENTRATIONS OF PHILONOTIS REVOLUTA AQUEOUS EXTRACT

The per cent mycelial inhibition also varied from lower to higher concentrations which was 12.71 at 10 per cent and increased to 67.80 at 100 per cent extract concentration. 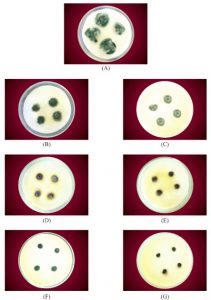 FIG. 2: COLONY DIAMETER, FRESH WEIGHT AND PER CENT INHIBITION OF MYCELIAL GROWTH OF HELMINTHOSPORIUM TURCICUM IN THE CONTROL (A); 10(B), 20(C), 40(D), 60(E), 80(F) AND 100 (G) PER CENT CONCENTRATIONS OF PHILONOTIS REVOLUTA ACETONIC EXTRACT

The results of methanolic extract (Table 4, Fig. 3) are as follows- in the control, colony diameter was maximum (28.16mm) it decreased significantly to 24.16mm at 10 per cent and 4.40mm at 100 per cent concentration of the extract. Similarly fresh

Per cent mycelial inhibition increased along with increasing concentrations and it was reported zero in the control which increased significantly to 13.80 at 10 per cent and reached up to 84.32 at 100 per cent concentration. 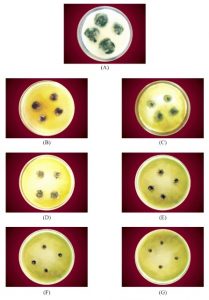 FIG.3: COLONY DIAMETER, FRESH WEIGHT AND PER CENT INHIBITION OF MYCELIAL GROWTH OF HELMINTHOSPORIUM TURCICUM IN THE CONTROL (A); 10(B), 20(C), 40(D), 60(E), 80(F) AND 100 (G) PER CENT CONCENTRATIONS OF PHILONOTIS REVOLUTA METHANOLIC EXTRACT

Various Phytochemical constituents were reported in plant extracts (Table 1). The presence of secondary metabolites was tried to detect in methanolic extract of the plant through HPLC.

Along with this standard quercetin was also analyzed which showed the retention time 19.104. The methanolic extract of P.revoluta also showed a peak with retention time 19.101 which confirmed the presence of quercetin in methanolic extract of P.revoluta (Graph 1, 2) The first evidence of flavonols in bryophytes were kaempferol and quercetin in Corsinia coriandrina 12. 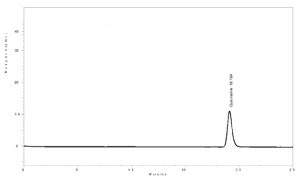 GRAPH 1: STANDARD (QUERCETIN) THE RETENTION TIME OF STANDARD QUERCETIN WAS FOUND TO BE 19.104 (GRAPH 1)

GRAPH 2: METHANOLIC EXTRACT OF P. REVOLUTE THE RETENTION TIME OF QUERCETIN IN P. REVOLUTE FOUND TO BE 19.10 (GRAPH 2), WHICH IS MATCHING WITH STANDARD Rt VALUE

Steroids and terpenoids occur in both mosses and liverworts, of all the diterpenoids only one is present in mosses. Terpenoids or aromatic compounds are very significant chemosystematic markers in bryophytes 13.

Flavonoids are a group of polyphenolic compounds, which are widely distributed throughout the plant kingdom. Flavonoids like Rutin and quercetin possess many biochemical effects. An HPLC method was developed for the estimation of rutin and quercetin from methanol herbal extract of Amaranthus viridis. Seven pure flavonoides were isolated and identified from moss species. Extract of certain Bryophytes such as Plagiochasma articulatum, Anthoceros longii, Fissidens bryoides showed Antibiotic property against Agrobacterium Tumifacian 14-15. Antifungal activity of a moss was determined against certain Phytopathogenic fungi 16. Effect of liverwort R.gangetica against F.moniliforme and found cold water Extract more effective than boiled water Extract.

Antibiotic activity of 52 species of the Bryophytes tested against 12 microorganisms. Solubility data and antibiotic spectra of the active plants indicated the occurrence of the variety of antibiotic substances among Bryophytes 17- 18. Phytotochemical analysis and antimicrobial Activity of moss Bryum celluiare (Hook.) (Bryales: Bryaceae) was tested against test fungi Drechslersa maydis (Drech.) and Curvularia lunata (Wakker) Boedijn  the causal organisms of leaf  Blight of Zea mays L. (Poales: Poaceae) and Leaf spot of wheat respectively and reported that B. Cellulare is a store house of various bioactive compounds. Methanolic crude extract of Bryum argentum had significant antibacterial potential.

The results were confirmed with the different concentrations of commercially available antibiotic drugs amoxillian and streptomycin.

Further HPLC analysis of B.argentum confirmed the presence of α-terpenol which exhibited antimicrobial activity 19-20. Antifungal potential of Bryum cellulare aqueous and methanolic crude extracts against fungi Curvularia lunata spore germination and reported that the various concentrations of this plant inhibit spore germination and malformation resulted in the hyphae also 21.

CONCLUSION: As the methanolic extract showed efficacy better than other extracts, this may be due to the possibility of solubility of active chemicals which are responsible for antifungal activity in vitro. A flavonoid, quercetine was confirmed in methanolic extract of the plant. This study suggests that bryophytes can be used as an alternative natural antifungal agent as green fungicides instead of synthetic fungicides.