INTRODUCTION: Ezetimibe (EZE) chemically (3R, 4S)-1-(4-fluorophenyl) -3-((3s)-3-(4-fluoro phenyl-3- hydroxypropyl)-4-(4-hydroxyphenyl) -2-azetidinone is an antihyperlipidaemic agent that has usefulness in lowering cholesterol levels. It acts by decreasing cholesterol absorption in the intestine by blocking the absorption of the sterol at the brush border.

Specifically, the β-lactam binds to the Niemann-pick C1 like 1(NPC1L1) protein on the gastrointestinal tract that is responsible for cholesterol absorption. Although it may be used alone, it is marketed as a combination product with simvastatin 1-4.

Analytical methods have been reported for the estimation of SIM alone or in combination with other antihypertensive agents or anti-hyperlipidemic drugs in pharmaceutical formulations, these include reverse-phase high-performance liquid chromatography 13-15, LC-MS/MS method 16, solubility study method 17, bioanalytical method 18-19, polarographic method 20. Rosuvastatin (RV) chemically 7- [4- (4- fluorophenyl) - 6- (1-methylethyl)- 2- (methyl-methylsulfonyl - amino)-pyrimidin-5-yl] 3, 5-dihydroxy-hept-6-enoic acid is one of the more recently introduced statins. Statins are HMG-CoA reductase inhibitors. The conversion of 3-hydroxy 3 methyl glutaryl (HMG)-COA to mevalonic acid is especially important because it is a primary control site for cholesterol biosynthesis 1-4.

Methods such as RP-HPLC 21-25, synchronous spectrophotofluorometry 26, UV spectrophotometric methods 27, HS GC MS28 have been reported for estimation of RV alone or in combination with other drugs. The drugs simvastatin is official in BP 29. Ezetimibe, simvastatin, and rosuvastatin are official in IP 30. The chemical structures of EZE, SIM, and RV are shown in Fig. 1.

A literature survey revealed that several methods have been reported for the estimation of EZE, SIM, and RV individually as well as in combination with some other antihypertensive drugs. However, in analysis, good approach is to develop a specific method that avoids interference of other drugs in determination from their combined mixture. In present piece of work, an attempt has been made to develop a suitable analytical method for simultaneous estimation of EZE and SIM, EZE, and RV in formulation. HPLC methods have been widely used for routine quality control assessment of drugs because of their accuracy, repeatability, selectively, sensitivity and specificity. Analytical methods must be validated before use the proposed HPLC–UV detection method was validated in accordance with International Conference on Harmonization (ICH) guidelines 31, 32 by assessing its selectivity, linearity, accuracy, and precision, limit of detection and limit of quantitation.

Before analysis both the mobile phase and sample solutions were degassed by the use of a sonicator (Lab man scientific Instruments Chennai) and filtered through a 0.22 μm filter (Pall Corporation, Mumbai). The identity of the compounds was established by comparing the retention times of compounds in the mixed solution with those in standard solutions. Chromatography was performed in an ambient temperature maintained at 40 ± 1 °C. The UV spectrum of EZE, SIM, and RV for selecting the working wavelength of detection was taken using a Shimadzu-1700 a double beam UV - Visible spectrophotometer (Shimadzu, Kyoto, Japan).

Preparation of Standard Solutions of EZE, SIM, and RV: About 10 mg of each drug was accurately weighed separately and transferred to separate 10 ml volumetric flasks. The pure drugs were dissolved in mobile phase, and the volume was made up to the mark, i.e. 10 ml with mobile phase. From this standard stock solution, the aliquots of solution were further diluted with mobile phase to obtain standard solutions with conc. range 1 – 12 μg/ml for EZE, 2 - 12 μg/ml for SIM and 2-12 μg/ml for RV. The mixed standard solution was also prepared simulated to marketed formulations.

Standard regression curve analysis was obtained by the use of Microsoft Office Excel software and Means, standard deviations and coefficient of variance were calculated.

Assay of Tablet Formulation: 20 tablets of formulation containing 10 mg SIM and 10 mg EZE were weighed and triturated to powder, powder equivalent to 5 mg of EZE and 5 mg of SIM was accurately weighed and transferred to a 10 ml volumetric flask and dissolved into mobile phase and volume was made up to 10 ml with mobile phase. The solution was sonicated for 15 min, to ensure the uniform and homogenous solution of the drugs. The solution was filtered through a membrane filter (pore size 0.45μ). The aliquot of solution was further diluted to 5 ml into clean and dry volumetric flask with mobile phase to obtain conc. of 2 μg/ml of EZE and 2 μg/ml of SIM.

Similarly 20 tablets of formulation containing 10 mg of EZE and 10 mg of RV were weighed and triturated to powder, powder equivalent to 5 mg of EZE and 5 mg of RV was weighed and transferred to a 10 ml volumetric flask and dissolved into mobile phase and volume was made up to 10 ml with mobile phase. The solution was sonicated for 15 min, to ensure the uniform and homogenous solution of the drugs. The solution was filtered through a membrane filter (pore size 0.45μ). The aliquot of solution was further diluted to 5 ml into clean and dry volumetric flask with mobile phase to obtain conc. of 2 μg/ml of EZE and 2 μg/ml of RV. Before injecting the formulation solutions were filtered through syringe filter, degassed for 10 min in the sonicator, and injected 20 μl solutions in the column by Hamilton syringe. The obtained chromatograph was read and the peak areas were measured to know the conc. of tablet solution.

Validation: The objective of method validation is to demonstrate that the method is suitable for its intended purpose as it is stated in ICH guidelines. The method was validated for linearity, precision (repeatability and intermediate precision), accuracy, selectivity, and specificity. Accuracy was assessed by measuring recovery at three different levels. Precision assessed by measurement of intra and inter-day precision. Selectivity and specificity of the method were assessed by injecting solutions containing the drugs.

After chromatography two sharp peaks were obtained for EZE and SIM, RV and EZE. LOD and LOQ were measured to evaluate the detection and quantitation limits of the method and to determine whether these were affected by the presence of impurities. These were calculated by using equations, LOD = 3.3 σ/S and LOQ = 10 σ/S, where σ is the standard deviation of the response and S is the slope of the calibration plot.

HPLC Method Development and Optimization: The multi-component formulations have gained a lot of importance as there is greater patient acceptability, increased potency and decreased side effects. EZE, SIM, and RV are used for the treatment of hypertension, as anti-hyperlipidemic. This work was focused on optimization of the conditions for the simple and rapid as well as low cost and effective analysis including a selection of the proper column or mobile phase to obtain satisfactory results.

From the overlaid UV spectra, suitable wavelength considered for monitoring the drugs was 245 nm (For RV and EZE) and 234 nm (For SIM and EZE). It was observed that analytes absorbed well at 245 nm and 234 nm, and at this wavelength, there was no interference from the mobile phase or baseline disturbance, and it was, therefore, concluded that 245 nm and 234 nm was the most appropriate wavelength for analysis of drugs with suitable sensitivity. 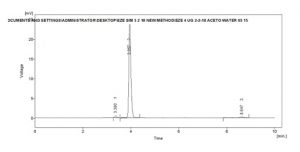 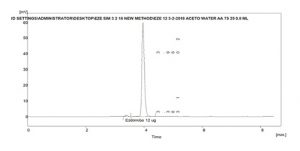 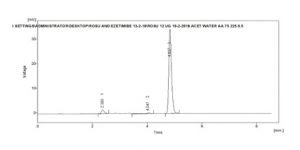 FIG. 6: CHROMATOGRAPH OF EZETIMIBE   AND SIMVASTATIN

FIG. 7: CHROMATOGRAPH OF EZETIMIBE AND ROSUVASTATIN

Method Validation: The system suitability parameters like capacity factor, number of theoretical plates, and tailing factor for all the analyte were found to be within the limit indicating the suitability of the system Table 1. The values obtained for k′ (1 < k′< 10) and RS (>2) are demonstrated that selected chromatographic conditions are appropriate for separation and quantification of all compounds. The number of theoretical plates and the tailing factor were within the acceptance criteria of >2000 and ≤ 1.5, respectively, indicating good column efficiency and optimum mobile phase composition.

Linearity: Linearity was tested in the concentration range 2-12 μg/ml for EZE, 2-12 μg/ml for SIM, and 2-12 μg/ml for RV. To obtain a calibration curve, standard solutions in the respective conc. range was injected and peak area was measured.

The solutions were chromatographed six times, in accordance with the International Conference on Harmonization. Separate calibration plots for EZE, SIM, and RV were constructed by plotting peak area against the respective concentrations. From the calibration curve, it was found that the drugs were linear in the above concentration range and graphically shown in Fig. 8. The calibration graph was used as a reference to know quantitatively conc. of unknown solution of mixture. The method was evaluated by determination of the correlation coefficient and intercept, calculated in the corresponding statistical study (ANOVA), correlation coefficient r2 values > 0.999, and intercept very close to zero confirmed the good linearity of the method Table 2.

TABLE 2: RESULTS FROM STUDY OF LINEARITY

Assay of Tablet Formulation: The percentage label claim present in tablet formulation was found to be for 99.73% and 101.28% for SIM and EZE, 99.87% and 101.31% for RV and EZE respectively shown in Table 3. The precision of the method was confirmed by the repeated analysis of formulation for six times. The calculated % COV values were tabulated in Table 3. The low % COV values indicated that all the three drugs showed good agreement with the label claim ensures the precision of the method.

Precision: Precision was determined by repeating assay six times and SD and RSD gave in Table 4.

Accuracy: To check the accuracy of the developed methods and to study the interference of drug components, analytical recovery experiments were carried out as per ICH guidelines. The results of the recovery studies and its statistical validation data given in Table 4 indicate high accuracy of the proposed method. The percentage recovery was found to be in the range of 101.23-103.49% for SIM, 98.13-99.73% for EZE, and 98.33-99.91% for RV, 97.99-98.69 for EZE. The % COV values for SIM, EZE formulation and RV, EZE formulation were given in Table 4.

TABLE 4: RESULTS OF PRECISION OF THE METHOD / RESULTS OF RECOVERY ANALYSIS

Specificity: The specificity of the HPLC method was ascertained by analyzing standard drug and sample solutions. The retention time of EZE, SIM, and RV was confirmed by comparing the retention time with that of the standard.

CONCLUSION: Drug interference between these anti-hyperlipidemic agents was not observed during this estimation, and a simple isocratic RP - HPLC method with UV detection has been developed for simultaneous determination of EZE and SIM, RV and EZE. The method was validated for accuracy, precision, specificity, and linearity. The run time is relatively short (8 to 10 min), which enables rapid quantification of many samples in routine and quality control analysis of tablets. The method also uses a solvent system with the same composition as the mobile phase for dissolving and extracting drugs from the matrices, thus minimizing noise.

Thus, the proposed method is rapid, selective, requires a simple sample preparation procedure, Moreover, the lower solvent consumption leads to a cost-effective and represents a good procedure of EZE and SIM, RV and EZE determination in bulk and in pharmaceutical dosage forms.

ACKNOWLEDGEMENT: The authors are thankful to Principal, SVPM College of Pharmacy, Malegaon (BKII), Baramati (Pune) for providing the necessary facilities to carry out the research work. Also thankful to Swapnroop drugs and pharma, Aurangabad for supplying the samples of ezetimibe and simvastatin and Ajanta Pharma, Aurangabad for supplying the gift sample of rosuvastatin.

CONFLICT OF INTEREST: The authors declared that they have no conflict of interest.