Categories Menu
Home » ESTIMATION OF TEICOPLANIN IN PARENTERALS BY RP-HPLC

A simple, precise, rapid and accurate Reverse Phase HPLC method was developed for the estimation of Teicoplanin in Parenteral dosage form. An Xterra RP C18, 250x4.6 mm, column with 5 µm particle size and the mobile phase consisting of 0.02M Potassium Dihydrogen Orthophosphate + 0.02M Dipotassium Hydrogen Orthophosphate + 0.5% Triethyl Amine in water pH: 3.2 adjusted with Orthophosphoric Acid: Acetonitrile (40:50). Acetonitrile in the isocratic mode was used. The flow rate was 0.5 ml/min and the effluents were monitored at 210 nm. The retention time was 4.178 min. The detector response was linear in the concentration of 24.1-289.2 mcg/mL for Teicoplanin, the respective linear regression equation being Y (-242937.9235) = 71026.949x + 174544.8363 for Teicoplanin. The Limit of Detection (LOD) and The Limit of Quantification (LOQ) were 1.205 mcg/mL and 3.615 mcg/mL respectively for Teicoplanin. The percentage assay of Teicoplanin was 99.64 %. The method was validated by determining its accuracy, precision and system suitability. The results of the study showed that the proposed RP-HPLC method is simple, rapid, precise and accurate, which is useful for the routine determination of Teicoplanin in bulk drug and in its pharmaceutical dosage forms.

INTRODUCTION: Teicoplanin, chemically is Ristomycin A 34- O- [2-(acetylamino)- 2- deoxy-.beta.- D-glucopyranosyl]- 22, 31- dichloro- 7- demethyl- 64- O-demethyl- 19- deoxy- 56- O-[2- deoxy- 2- [(8- methyl- 1-oxononyl)amino]-.beta.- D- glucopyranosyl]- 42- O-.alpha.- D- mannopyranosyl (figure 1). The Empirical formula is C88H97Cl2N9O33   and the Molecular weight is 1879.7 g/mol. Teicoplanin is an antibiotic used in the prophylaxis and treatment of serious infections caused by Gram-positive bacteria, including methicillin-resistant Staphylococcus aureus and Enterococcus faecalis. It is a glycopeptide antibiotic extracted from Actinoplanes teichomyceticus, with a similar spectrum of activity 1 to vancomycin. Its mechanism of action is to inhibit bacterial cell wall synthesis 2. It works by stopping the bacteria making their cell walls and by disrupting their cell membranes 3. Together, the cell wall and membrane form a barrier between the bacterial cell contents and the external environment. By disrupting this barrier, Teicoplanin kills the bacteria that are causing the infection 4-9. Its strength is considered to be due to the length of the hydrocarbon chain. Literature survey reveals a few chromatographic methods to determine the Teicoplanin in Parenteral dosage form and in biological fluids. So far, no assay methods by liquid chromatography were reported for the estimation of Teicoplanin in pharmaceutical dosage forms. The availability of an HPLC method with high sensitivity and selectivity will be very useful for the determination of Teicoplanin in pharmaceutical formulations. The aim of the study was to develop a simple, precise and accurate reverse-phase HPLC method for the estimation of Teicoplanin in bulk drug samples and in pharmaceutical dosage form.

HPLC Conditions:  The contents of the mobile phase were 0.02M Potassium Dihydrogen Orthophosphate + 0.02M Dipotassium Hydrogen Orthophosphate + 0.5% Triethyl Amine in water pH: 3.2 adjusted with Orthophospharic Acid: Acetonitrile (40:50). Acetonitrile in the isocratic mode has been used. They were filtered before use, through a 0.45 µm membrane filter, and pumped from the respective solvent reservoirs to the column at a flow rate of 0.5 ml/min. The run time was set at 30.0 min and the column temperature was ambient. Prior to the injection of the drug solution, the column was equilibrated for at least 30 min with the mobile phase flowing through the system. The eluents were monitored at 210 nm.

Preparation of Standard Stock solution: A standard stock solution of the drug was prepared by dissolving 241 mg of Teicoplanin in 100 ml volumetric flask containing 30 ml of diluents 0.02M Potassium Dihydrogen Orthophosphate + 0.02M Dipotassium Hydrogen Orthophosphate + 0.5% Triethyl Amine in water pH: 3.2 adjusted with Orthophosphoric Acid: Acetonitrile (40:50), sonicated for about 15 min and then made up to 100 ml with Water: Acetonitrile to get standard stock solution of 2.41 mg/mL of Teicoplanin.

Working Standard solution: 5 ml of the above stock solution was taken in 50 ml volumetric flask and made up to 50 ml with diluent, Water: Acetonitrile to get a concentration of 241 µg/ml of Teicoplanin.

Linearity: Aliquot of standard Teicoplanin stock solution was taken in a different 10 ml volumetric flask and diluted up to the mark with the mobile phase such that the final concentration of Teicoplanin was in the range of 24.1-289.2 μg/ml. Each of the drug solution (10 μL) was injected three times into the column, and the peak area and retention time were recorded. Evaluation was performed with PDA detector at 210 nm and a calibration graph was obtained by plotting peak area versus concentration of Teicoplanin (Figure 2). 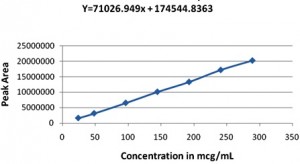 The plot of peak areas of sample against respective concentration of Teicoplanin was found to be linear in the range of 24.1-289.2 µg/ml with correlation coefficient of 0.9995. Linear regression least square fit data obtained from the measurements are given in Table 1. The respective linear regression equation being Y (-242937.9235) = 71026.949x + 174544.8363 for Teicoplanin. The regression characteristics, such as slope, intercept, and %RSD was calculated for this method and given in Table 1.

Assay: 10 µl of sample solution (Ticocin® Vial 200 mg, Cipla Limited) was injected into the injector of liquid chromatograph. The retention time was found to be 4.178 min for Teicoplanin. The amount of drug present per tablet was calculated by comparing the peak area of the sample solution with that of the standard solution. The data are presented in Table 2.

Recovery Studies: Accuracy was determined by recovery studies of Teicoplanin. A known amount of standard was added to the preanalyzed sample and subjected to the proposed HPLC analysis. Results of recovery study are shown in Table 2. The study was done at three different concentration levels.

* Average of three determinations; ** after spiking the sample

RESULTS AND DISCUSSION: The system suitability tests were carried out on freshly prepared standard stock solutions of Teicoplanin. Parameters that were studied to evaluate the suitability of the system are given in Table 3.

Limit of Detection (LOD) and Limit of Quantification (LOQ): The Limit of Detection (LOD) and The Limit of Quantification (LOQ) were 1.205 mcg and 3.615 mcg respectively for Teicoplanin. From the typical chromatogram of Teicoplanin as shown in Figure 3, it was found that the retention time was found to be 4.178 min. A mixture of 0.02M Potassium Dihydrogen Orthophosphate + 0.02M Dipotassium Hydrogen Orthophosphate + 0.5% Triethyl Amine in water pH: 3.2 adjusted with Orthophosphoric Acid: Acetonitrile (40:50) in the isocratic mode, was found to be the most suitable as mobile phase to obtain the peaks well defined and free from tailing. 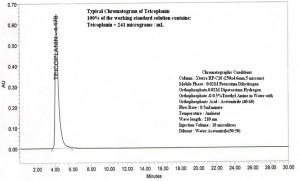 In the present developed HPLC method, the standard and sample preparation required less time and no tedious extractions were involved. A good linear relationship (r=0.9995) was observed between the concentration range of 24.1-289.2 µg/ml for Teicoplanin. Low values of standard deviation are indicative of the high precision of the method. The assay of Teicoplanin vials was found to be 99.64 %. From the recovery studies it was found that about 99.2% of Teicoplanin was recovered which indicates high accuracy of the method.

The absence of additional peaks in the chromatogram indicates non-interference of the common excipients used in the tablets. This demonstrates that the developed HPLC method is simple, linear, accurate, sensitive and reproducible. Thus, the developed method can be easily used for the routine quality control of bulk and parenteral dosage forms of Teicoplanin within a short analysis time.

ACKNOWLEDGEMENTS: The authors are grateful to M/s Cipla Limited, Mumbai for the supply of Teicoplanin as a gift sample.