ABSTRACT: Depression is the most common and spreadable disorder in recent age as people are going through a lot of pressure in their daily work caliber and so many unconditional events. A new approach called derivatization spectroscopy was developed for the anti-depressant agent, marketed formulation of Bupropion hydrochloride, to confirm the interfering substances from the excipients of solid dosage form, in addition to that the stability parameters to assure the analysis time with the minimum usage of the reference standard and sample solution. The present work aims to develop simple, sensitive stability indicating the method to develop a model to estimate BPH in the solid dosage form by using derivative spectroscopy tool to avoid the excipients interferences in the developed assay method. First, made the stock solution of 100 µg/ml from 1000 µg/ml previously prepared solution. The method was validated over the concentration range of 5-50 µg/ml of marketed formulation of Bupropion Hydrochloride. The assay method & derivatization was performed using UV spectroscopy at 252 nm wavelength. The intra-assay & intermediate precision performed with the % RSD of less than 2.0%.

The targeted drug distribution is a phenomenon followed by drug delivery specialist to carry the active entity to the body part where exactly the ailment occurred using active and passive targeting 1. Controlled drug distribution process delivers the medicine at a fixed ratio in stipulated extended time when it administered through locally and systematically, which results in the drug act in reproducible phenomenon throughout the course 2.

In recent scenario, modulated drug distribution process is an emerging approach to delivery medicine using engineered smart micro carriers, which seems to surpass a priori of monitoring regards current methods of delivering medicines. Magnetic drug distribution system by particulate transporters are a very effective and efficient approach to deliver the drug at the final destination of our body part. The advantage of this method is high dose delivery possible towards the chemotherapy/radiological treatment for tumor treatment without creating some side effects to the normal tissues 3. The most spreadable mental disorder in recent days for human population is depression & it is defined as a collection of different types of illness, and mental inability, the brutality of this disorder depends from mild to severe as it is time-dependent case 4.

This disorder ranked globally in the top as the largest contributor in the non-fatal health issues. According to Global Health Estimates, approximately 7.5% of global population is being suffered from this disability, close to 2% of people are getting possible chance to recover from this mental disorder 5 the graphical representation presented in the Fig. 1. In addition to that, it is predictable to be the second foremost reason for all diseases 6. Internationally, the percentage of the population with depression is assessed to be 4.4% out of which 5.1% and 3.6% will be the females and males respectively. According to the WHO constituencies, the proportion varies from as low as 2.6% among males in the Western Pacific Area to 5.9% among females in the African Region.

FIG. 1: DALYs DUE TO MENTAL AND SUBSTANCES ABUSE

The Sustained distributed dosage form termed differently similar to sustained action, prolonged the action, controlled release, extended action to pin the standards on its mechanism.  Though it named differently, the core aim is to design a formulation to achieve prolong therapeutic effect by continuously releasing medication through a long period after administration of a single dose by minimizing the side effects.

Bupropion Hydrochloride (BPH) is an antidepressant medication chemically this entity known as 2-(tert-butylamino)-1-(3-chlorophenyl) propan-1-one hydrochloride Fig. 2 10, BPH is a colorless crystalline powder, highly polar and soluble in water, it is used to treat major depressive disorders and seasonal affective disorders.  Additionally, it helps people to stop smoking. BPH can improve the effects of the natural neurotransmitter in the human brain.

RP-HPLC method development and validation for the determination of BPH in a solid dosage form 11, Stress degradation studies of BPH & development of a UV spectroscopic method in bulk & pharmaceutical dosage form 12 through the UV analysis work related to present study the derivative spectroscopy approach was not attempted to confirm the intrusive elements from the excipients of solid dosage form, in addition to that the stability parameters where not been screened to assure the analysis time with minimum usage of reference standard and sample solution, In the other reported methods BPH and its metabolites were estimated using higher end equipment which produce high accurate result with low concentration correspondingly the cost of analysis also high.

The present work aims to develop simple, sensitive stability indicating the method to develop a model to estimate BPH in the solid dosage form by using derivative spectroscopy tool to avoid the excipients interferences in the established assay method.

Preparation of Assay Solution: Weigh 20 tablets separately and then take the average weight of the total tablet. Crushed all the tablet using Mortar & Pestle. From their weighing 10 mg of subtle crushed tablet powder and transfer into a 10 ml volumetric flask and add a little amount of Millipore water for dissolving purpose. Sonicate this for 10 minutes and volume makes up with Millipore water. Then filter the solution using Whatman filter paper and separate the filtrate into another volumetric flask. With concentration 1 mg/ml.

Preparation of Working Standard Solution: From the reference standard solution pipette out 1 ml and transfer to another 10 ml volumetric flask and made up the volume with Millipore Water. And the concentration of the solution is 100 µg/ml.

Method Validation: As described the above suitable condition, the calibration lines were obtained using standard solutions of 5, 10, 15, 20, 25, 30, 35, 40, 45 and 50 μg/mL. Bupron® SR. Linear regression analysis was used to calculate the slope, intercept, and coefficient of determination (r2) of each calibration line.

The accuracy and precision of the methods were determined as documented by ICH Q2(R1) guideline. Multiple analysis of BUP at ten different known concentrations (5, 10, 15, 20, 25, 30, 35, 40, 45 and 50 μg/mL) were analyzed daily (intra-day) and repeated for three days (inter-day) using the validated analytical procedure. The outcomes were calculated as mean ± standard deviation & % RSD for both intra-day and inter-day analysis.

Assay: Assay procedure is to characterize the quality of bulk pharmaceuticals. In the field of drug analysis, bulk drug materials analysis, intermediate occurs with their synthesis, impurities, degradation products, and metabolites of biological samples is a very important area of research. Assay procedures are mainly used to measure the analyte present in a given sample. This study aims to obtain data that can contribute to high quality, maximal efficacy, and safety of drug therapy 7.

Typical validation characteristics which should be considered are listed below:

Precision: The precision is the analytical procedure which expresses the closeness of agreement between sequences of measurement acquired from multiple sampling of the same sample under the given conditions 8.

Linearity: Linearity study was done for testing the drug absorbance phenomenon in accordance with various concentration range. Also to merge the stability of the drug.

Range: Range is defined as an analytical procedure which shows the suitable level of precision, accuracy & linearity in a proper interval of upper and lower concentration analyte limit.

Recovery Study: Accuracy was being assessed using a minimum of 9 determinations over a multiple concentration range. Accuracy should be determined the assay of previously added of analyte in the sample or difference between the mean and the accepted true value.

Derivative Spectroscopy: Chemical derivatization is the part of secondary spectrophotometric analysis procedure to determine the qualitative and quantitative measurement of a particular in the sample solution. Derivative spectroscopy is the changes in the higher range of absorption as regards to wavelength for multiple analysis. If a spectrum is expressed as absorbance, A, as a function of wavelength, f (λ), and the derivative spectra are:

RESULTS AND DISCUSSION: UV spectroscopy was applied for the concurrent estimation of marketed formulation of Bupropion hydrochloride. Since, it is the authoritative analytical technique to perform the pharmacokinetic study stability, selectivity & accuracy of a test solution. The essential to have this derivatization study is to the improvement of a varied collection of reaction and procedures. Thus the main fundamentals behind derivatization reactions are complete the reactive molecule to readily determinable compounds with keeping the properties and concentration same as original compounds.

Determination of Maximum λmax through UV- Spectroscopic Method: The very beginning step is to know & perform the maximum wavelength of that particular dosage form to perform the assay so that we can get the best absorbance value.

Precision: Precision is the method to accumulate the closeness of individual series of solution to various aliquots of concentration of the solution.

Inter-day Precision: Inter-day precision was determined by the analysis of one aliquot sample on three consecutive days. The % RSD result is under 1%, which indicates a low variance of the method. 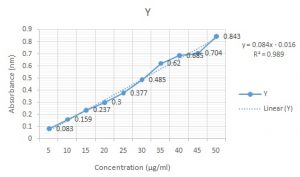 Linearity: Linearity was determined to obtain the linear relationship between the detector response and the concentration of the analyte required. From the linearity curve, got the regression value of 0.99, which represents the goodness of fit. The normal linear response is shown in Fig. 4.

Percentage (%) Purity: Performance the percentage purity to determine the pure compounds in an impure sample. 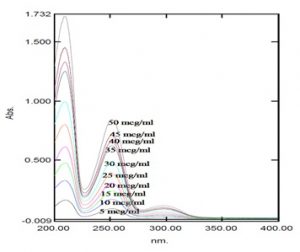 First Derivative Spectrum Analysis: A first-order derivative is the rate of change of absorbance concerning wavelength. The curves are finished at zero. 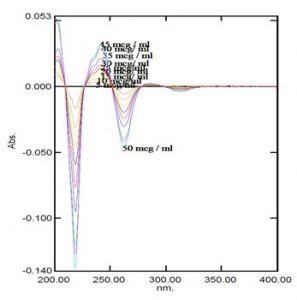 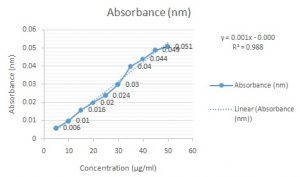 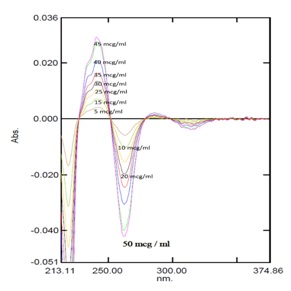 Second Derivative Spectrum Analysis: In the second order derivative study, we got the negative spectra at the same wavelength. 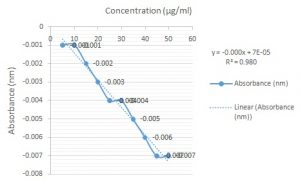 CONCLUSION: An innovative approach called derivatization spectroscopy was established as simple, sensitive, stability indicating method & to estimate Bupropion hydrochloride in the solid dosage form by using derivative spectroscopy tool to avoid the excipients interferences in the developed assay method. The results obtained were found to be precise and exclusive. Confirm the interfering substances from the excipients of solid dosage form, in addition to that the stability parameters to assure the analysis time with the minimum usage of the reference standard and sample solution.

ACKNOWLEDGEMENT: Thankful to JSSAHER, Mysuru and JSS College of Pharmacy, Ooty, Tamil Nadu, India, providing all the facilities for this research work.