Argemone mexicana isan indigenous herb commonly known as Prickly poppy. It belongs to the family Papaveraceae. Argemone mexicana is noted to possess medicinal benefits in traditional system of medicine. During last few decades, there has been increasing interest in the study of medicinal properties of this plant and it is reported for Antimicrobial, Antidiabetic, Antioxidant and Hepatoprotective activity. The plant was also reported for other activities like Larvicidal activity, Wound healing activity, Cancer activity, Antihelmintic activity and Neuropharmacological studies. In light of these medicinal properties, this plant can be represented as a valuable source of medicinal compound. This study depicts the overall information about the ethnobotany, phytochemistry and pharmacological activities of the A. mexicana.

INTRODUCTION:India is well-known for the use of medicinal plants as a folklore medicine from ancient times. At present many compounds have been isolated from plants for treating numerous diseases. Medicinal plant research has succeeded in overwhelming the problems associated with synthetic drugs in maintaining low toxicity and less side effects. In last few decades, many plants has been reported for ethno pharmacological properties viz., Antimicrobial activity 1, Cytotoxic activity 2,  Antidiabetic activity 3, Antiarthritic activity 4, Antioxidant activity 5,6 , Anti-tuberculosis activity 7 , Antiulcer activity 8, Wound healing activity9 .

Argemone mexicana is an annual herb commonly known as Mexican prickly poppy belongs to the family Papavaraceae 10. It is native of tropical America which has distributed in tropical and subtropical regions of the World 11. In India, it grows in the temperate region as a weed in waste lands, cultivating fields and road sides 12. In the traditional system of medicine, whole plant of A. mexicana is extensively using in the treatment of tumors, warts, skin diseases, inflammations, rheumatism, jaundice, leprosy, piles, warm infestations and dysentery. Leaf decoction is used to cure malarial fever and ulcers. Seeds are efficient in treating leprosy, dropsy and jaundice. Juice of the plant is used as a remedy against Scorpion bite 13. In recent years, many scientific investigations were carried out on different parts of this plant which gives a hope for the researchers to isolate many compounds of pharmacological interest.

The present study is to review the overall information on the taxonomical classification, morphology, distribution, traditional uses, phytochemical constituents and recent scientific investigations of A. mexicana plant.

Morphology of the plant: It is an erect annual spiny herb with grayish white stem secreting yellow coloured latex.  It grows to a height of 0.3 to 0.12m. Leaves are exstipulate, sessile, alternate, deeply lobed, cauline with unicostate reticulate venation with thorny margins. Fruit is thorny porcidal capsule having blackish brown seeds 14. Flowers are large, complete, hypogynous, pedicillate, actinimorphic, hermaphrodite and ebracteate. Calyx has 3 sepals, polysepalous with twisted aestivation. Corolla is yellow in colour with 6 petals, polypetalous, deciduos and imbricate aestivation.

Stamens are polyandrous, indefinite with complete, introse and yellow anthers. Gynoecium has 4-6 carpels, syncarpous with unilocular superior ovary and parietal placentation 15. Roots are long and subcylindrical. Argemone mexicana contains light yellow coloured fat oil which is obtained by pressurizing the seeds. Argemone oil is raw tasted and slightly has nauseous odour which can be easily saponified 16. Morphology of the plant is shown in Figure 1. 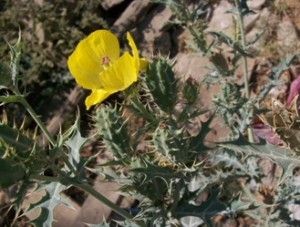 Traditional uses: A. mexicana is extensively used in traditional system of medicine in the treatment of numerous diseases. Various parts of the plant were extensively using in Ayurveda, Siddha, Unani and Homeopathic medicines.

In Ayurveda: The whole plant of A. mexicana is effective in guinea-worm infestations, purgative and diuretic. Seeds of the plant are used as an antidote in snake poisoning and also acts as an emetic, expectorant, demulcent and laxative. The protein-dissolving substances containing seed extract is used to cure warts, cold sores, cutaneous infections, itches, jaundice and dropsy 17. Seeds are effective against skin infection, sores, dropsy and jaundice 18.  Juice of the plant cures ophthalmic and opacity of cornea. Oil of the seed is used to treat skin diseases. Roots are antihelmentic and also used in, skin diseases, leprosy and inflammations 19.

In siddha medicine: This plant is widely used to cure venereal sores, photophobia, scorpion bite, leucorrhoea. Leaves along with black pepper are used to cure diabetes. The latex of A. mexicana used to treat boils by topical application on the site of boils. Whole plant is used to treat dental disorders20. Leaf decoction is used in the treatment of malarial fever and ulcers. Juice of the plant is applied on scorpion sting. Seeds are effective against leprosy, jaundice and dropsy 13.

In Unani medicine: A. mexicana helps in the enrichment of blood which acts as an expectorant and aphrodisiac. It is also used in treating skin diseases and leucoderma 21.

In Homeopathic medicine: The drug prepared from this plant is very effective in treating the problem caused by tape worm. The whole plant is reported to be used for the treatment of whooping cough and bronchitis 22.

Nomenclature of A. mexicana in different languages: A. mexicana is distributed widely in India and known with different names in various languages. Some of the names are reported in Table 1.

TABLE 1: NOMENCLATURE OF A. MEXICANA IN DIFFERENT LANGUAGES 11, 23

Phytochemical Constituents in A. mexicana: A. mexicana is reported to posses alkaloids 24, 25, amino acids 26, phenolics 27 and fatty acids 28 as major phytochemical groups. A series of bioactive compounds have been reported and some of them are isolated from different parts of A. mexicana.

The whole plant of A. mexicana was reported to posses isoquinoline alkaloids such as berberine, cheilanthifoline, coptisine, muramine, scoulerine, stylopine, cryptopine, thalifone, sanguinarine, protopine, optisine, chelerytherine and benzylisoquinoline alkaloids 29, 25, 30, 31, 32, 33. Alkaloids such as berberine, tetrahydroberberine, protopine and Benzophenanthridines have been isolated from the plant 34. Seed oil otherwise called as Argemone oil reported to contain sanguinarine and dihydrosanguinarine. It also contains palmitic, myristic, oleic and linoleic acids 35. Some of the structures of isolated compounds of this plant are shown in Figure 2 and 3. 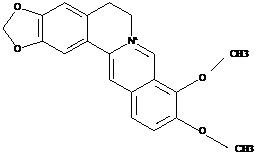 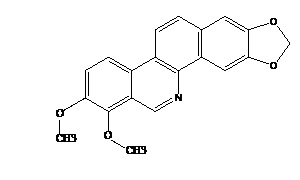 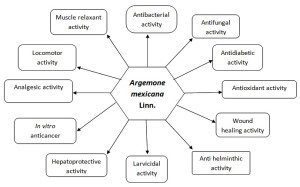 The essential oil from aerial and root parts of A. mexicana was evaluated for antimicrobial activity against S. aureus, B. subtilis, Klebsiella pneumoniae, P. aeruginosa, Candida  albicans, C. stellatoidea and C. torulopsis. It showed efficacy in inhibiting the growth ofselected bacteria and fungi among the tested organisms 38.

N-demethyloxysanguinarine isolated from chloroform extract of A. mexicana has showed antibacterial activity against K. pneumonia, S. aureus, E. coli and P. aeroginosa with Minimum inhibitory concentration of 1.5625 to 3.125 39.

The acetone, ethyl acetate and petroleum ether extracts of leaf and stem of A. mexicana was tested for its efficacy to inhibit water borne pathogens such as E. coli, Shigella sp., Staphylococcus sp. and Salmonella sp. Petroleum ether extract of both leaf and stem showed maximum activity, Ethyl acetate showed moderate activity where as acetone extract showed no activity against these water borne pathogens 40.

Larvicidal activity: Acetone fraction of petroleum ether extract of A. mexicana seed was reported to possess larvicidal activity against 2nd instar larvae of Aedes aegypti. Extract resulted in 100% mortality of the larva with LC50 value of 13.58 and 17.43 in field and laboratory conditions respectively 47.

Neuropharmacological studies: The ethyl acetate and methanol extract of the whole plant of A. mexicana was reported for analgesic activity, locomotor activity and muscle relaxant activity using Wistar albino mice at an oral dosage of 100, 200 and 400 mg/kg body weight. Both extracts showed significant activities but methanol extract at a dosage of 200 mg/kg body weight was found to be more potent for central nervous system activities such as analgesic, anxiolytic and sedative effects 50.

CONCLUSION: It can be concluded that the plant A. mexicana is a valuable medicinal herb based on its numerous therapeutic properties in traditional medicinal system. Further, scientific investigations proved its pharmacological efficacy. This plant gives a hope to the pharmacologists to develop new drugs with no side effects. Moreover, steps should be undertaken for the conservation and proper utilization of A. mexicana plant.

ACKNOWLEDGEMENT: The Authors wish to express sincere gratitude to the Management and Staff of VIT University, Vellore, TN, India for supporting this study.