ABSTRACT: Kamrup District of Asasm is bounded by Udalguri and Baksa districts in the north, Meghalaya in the south, Darrang and Kamrup Metropolitan in the east and Goalpara and Nalbari district in the west. The rural part of kamrup district is mostly inhabitated by different tribes such as Boro, Khoronia Kochari, Rajbonghi, and Nepalis. An ethno botanical survey was conducted during the year 2011-2012 in some selected villages to explore the medicinal plants used by the local traditional healers known as ‘bej’ and ‘Ohjha’ for treatment of diabetes mellitus. The data’s were collected using questionnaire and personal interviews with few local healers. The investigation revealed 56 species of plants belonging to 38 families which are used to cure diabetes. These traditional ethno medicinal plants are consumed either in form of juice, powder, or boiled extract of leave, stem, root, seed, fruit, bark, rhizome and flower. In some cases it was found that the whole plant is directly used as potent medicine.

INTRODUCTION:India is known for its valuable heritage for herbal medicinal knowledge. Its ethnic peoples living in the remote village area still depend to a great extent on the indigenous system of medicine. The North Eastern part of India signifies a Heritage of herbal remedies. It constitutes the states of Arunachal Pradesh, Assam, Manipur, Meghalaya, Mizoram, Nagaland, Tripura and Sikkim. Tribal population of Assam can be broadly divided into hill tribals and plain tribals. Among the hill tribes of Assam, Chakma, Dimasa, Garu, Hazong, Kuki, Karbi Maan, Mizo, Hmar, Naga etc. are common.

The North-eastern region is blessed with splendid diversity of ethno medicinal plants and traditional medicines prepared from medicinal plants are widely used in this part of country. The tribal people have been always in a close relationship with nature.

These people have a treasure of knowledge on ethno medicinal plants used for treatment of various diseases including diabetes. Diabetes is a metabolic disease that has become a se­rious problem of modern society due to the severe long-term health complications associated with it. In particular, type 2 diabetes mellitus (T2DM) is the most encountered form of diabetes, which is responsible for more than 80% of the to­tal cases of diabetes 2, 3, 4.

Currently there are more than 30 million people with diabetes mellitus in India and the incidence is increasing. By the year 2024, more than two-thirds of people with diabetes will be in the developing world of which majority would be resident in India and China 5. Diabetes mellitus is an endocrine metabolic disordercharacterized by hyperglycemia, altered lipids, carbohydrates, proteins metabolism and it increases risk of cardiovascular diseases complications. Both the types of diabetes (type 1 and 2) share the common characteristics of hyperglycemia, microvascular and macrovascularcomplications 6.

Patients with diabetes experience significant morbidity and mortality because of microvascular (retinopathy, neuropathy, and nephropathy) and macrovascular complications such as heart attack, stroke and peripheral vascular disease7. Currently, available therapies for diabetes include insulin and various oral antidiabetic agents such as sulfonylureas, biguanides and glinides. Many of them have a number of serious adverse effects; therefore, the search for more effective and safer hypoglycemic agent is one of the important areas of investigation 8.

Medicinal plants have potential effectiveness against diabetes and the phyto chemicals play a major role in the management of diabetes9. Plants are the basis of life on earth and are central to people livelihoods. Tribal people are the ecosystem people who live in harmony with the nature and maintain a close link between man and environment10. The hypoglycemic effect of several plants used as anti-diabetic remedies has been confirmed, and the mechanisms of hypoglycemic activity of these plants are being studied. Many traditional plant treatments for diabetes exist, a hidden wealth of potentially useful natural products for Diabetes control 11.

Alternative therapies with anti-diabetic activity have been researched relatively extensively, particularly in India. To date, over 400 traditional plant treatments for diabetes have been reported12. Medicinal plants, since times immemorial, have been used in virtually all cultures as a source of medicine. A study of ancient literature indicates that diabetes was fairly well known and well-conceived as an entity in ancient India. The knowledge of the system of diabetes mellitus, as the history reveals, existed with the Indians since prehistoric age 13.

Medicinal plants have the advantage of having little or no side effects. Till today metformin is the only ethical drug approved for the treatment of non-insulin dependent diabetes mellitus patients, which is derived from a medicinal plant Galega officialis and historically used for treatment of diabetes in medieval Europe 16

This study focuses on the ethno medicinal plant showing anti diabetic potentiality which is commonly used by the people of rural Kamrup district.

The main objective of this study is to document the use of herbs that are generally used for the treatment of diabetes by the people of rural Kamrup district.

This study is aimed at documenting indigenous knowledge which is very much important from the view point of conservation of biological resources and their sustainable utilization in the management of diabetes and its related complications.

Study area – Kamrup District is situated between 25.46 and 26.49 North Latitude and between 90.48 &91.50 East Longitude. It is bounded by Udalguri and Baksa districts in the north,Meghalaya in the south, Darrang and Kamrup Metropolitan in the east and Goalparaand Nalbari district in the west. It has a total geographical area of 4, 34,500 acres. Historically, present Assam was referred to as Kamrup in many of the ancient Indian literature. The villages that are studied are under Rangia Subdivision. The Schedule Castes of the state are 16 in number while there are 23 Schedule Tribes in Assam according to Census 1991.  Nearly 97.59% of the population lives in villages. 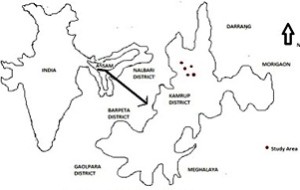 Selected survey area - Five major villages (Nokul, Hossang , Tetkuri, Jaggikoana, and Khairabari)  of rural Kamrup division mainly inhabited by Boro, Rajbonghi, Khoronia Kochari and Nepali were selected for the study  (Fig1). The villages were selected on the basis of higher population parameter, economic backwardness, and dependence on medicinal plants. Survey was conducted from June 2011 to August 2012. Tribal people believe in traditional healing of diseases and are so more depended on traditional ethno medicinal plants for treatment of disease like diabetes.

The village Nokul was so named because of the presence of nine different castes of people, where majority are of Boro tribes. The area of village Hossang is covered with more than 60% of tribal population (Boro, Rajbongshi and Khoronia Kocahri).

Tetkuri village have three sub divisions, where more than half a population belong to tribal category. Similarly Jaggikoana and Khairabari villages have a major part of tribal population.  While collecting information on ethno – medico botanical aspects, standard approaches and methodologies have been followed 15, 16, 17, 18.The ethno botanical data were collected using questionnaire, interviews and discussionswith some well-known Herbalists and the local healer commonly known as ‘Bej’ and ‘Ohjha’ of these five selected Villages.

The Herbalists were interviewed within their localities. Samples of all the medicinal plants cited by the Herbalist were collected and further identification and authentication was done in the Department of Botany, Gauhati University, Assam. The data forms were later analyzed, collated and tabulated to give the botanical names, common names, families and the part of the plants used. The results are presented in Table 1.

RESULTS AND DISCUSSION: The data obtained during the investigation period is summarized in Table 1.  A total of 56 medicinal plants belonging to 38 families were cited by the herbalists as being used in the region for the treatment of diabetes mellitus.

Among all the plants as cited by the herbalists, Aegle marmelos,   Allium cepa L., Azadirachta indica A.Juss ,Catharanthus roseus (L) G. Don,  Dillenia indica Linn, Clerondendrum infortunatum L,  Swertia chirata L. Mangifera, indica  L. Mirabilis jalapa L., Trigonella foenum graceum Linn, and Cinnamomum tamalafr Nus were ranked highest.From the study (Fig. 2) it has been observed that the leaf part is used maximum for medicinal purposes followed by the fruit and whole plant. But the individual parts of plants such as root, seed, stem and bark have significant importance in ethno medicinal practices. It has been found that different parts of a single species are also used to cure the disease. The plants parts are used either in powdered or paste form or consumed with different cuisine. 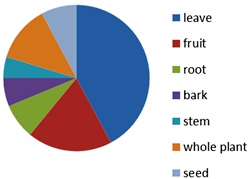 CONCLUSION: There are various constraints associated with studies related to information collection about medicinal plants from traditional sources as some of the herbalist interviewed refused to answer  questions for fear of being investigated later by government agencies while others did not wish to divulge their professional secrets.

Mutual contacts, patience, explanation of objectives, respect and financial help were found useful in overcoming such obstacles. A wide range of plants with ethno botanical value against some very important diseases have been reported but much larger number of folk medicine have remained endemic to certain tribal pockets in North East India.

Therefore, the present study was to assess the diversity of ethno medicinal plants used by villagers basically by the tribal community in rural Kamrup district of Assam and to document the traditional medical practices followed in healing complications associated with diabetes. This study has documented 56 medicinal plants mainly used by the tribe of rural Kamrup district for the treatment of diabetes mellitus.

Further detailed studies on the ethno botanical aspects in the region will provide a meaningful ways for the promotion of traditional herbal medicinal practices and scientific validation.