ABSTRACT: Diabetes is a complex and multifarious group of disorders characterized by hyperglycemia that has reached epidemic proportions in the present century. Several drugs such as biguanides and sulfonylureas are presently available to reduce hyperglycemia in diabetes mellitus. These drugs have side effects and thus searching for a new class of compounds is essential to overcome these problems. Management of diabetes without any side effects is still a challenge to the medical community. There is continuous search for alternative drugs. Therefore, it is prudent to look for options in herbal medicine for diabetes as well.

INTRODUCTION: Diabetes mellitus, one of the most common endocrine metabolic disorders has caused significant morbidity and mortality due to microvascular (retinopathy, neuropathy, and nephropathy) and macrovascular (heart attack, stroke and peripheral vascular disease) complications. Human bodies possess enzymatic and non-enzymatic antioxidative mechanisms which minimize the generation of reactive oxygen species, responsible for many degenerative diseases including diabetes. The disease is rapidly increasing worldwide and affecting all parts of the world. Due to deficiency of the insulin people suffering from diabetes have high blood glucose level. Type 2 diabetes or non-insulin-dependent diabetes mellitus, is the most common form of the disease, accounting for 90%–95% of cases in which the body does not produce enough insulin or properly use it.

According to World Health Organization the diabetic population is likely to increase up to 300 million or more by the year 2025.

There are three types of diabetes:

The body does not produce insulin, cause refer to this type as insulin-dependent diabetes, juvenile diabetes or early-onset diabetes. People usually develop type 1 diabetes before their 40th year, often in early adulthood or teenage years. Patients with type 1 diabetes will need to take insulin injections for the rest of their life. They must also ensure proper blood-glucose levels by carrying out regular blood tests and following a special diet.

The body does not produce enough insulin for proper function, or the cells in the body do not react to insulin (insulin resistance). Some people may be able to control their type 2 diabetes symptoms by losing weight, following a healthy diet, doing plenty of exercise, and monitoring their blood glucose levels. However, type 2 diabetes is typically a progressive disease - it gradually gets worse - and the patient will probably end up have to take insulin, usually in tablet form. Overweight and obese people have a much higher risk of developing type 2 diabetes compared to those with a healthy body weight. People with a lot of visceral fat, also known as central obesity, belly fat, or abdominal obesity, are especially at risk. Being overweight/obese causes the body to release chemicals that can destabilize the body's cardiovascular and metabolic systems.

This type affects females during pregnancy. Some women have very high levels of glucose in their blood, and their bodies are unable to produce enough insulin to transport all of the glucose into their cells, resulting in progressively rising levels of glucose. Diagnosis of gestational diabetes is made during pregnancy. The majority of gestational diabetes patients can control their diabetes with exercise and diet. Between 10% to 20% of them will need to take some kind of blood-glucose-controlling medications. Undiagnosed or uncontrolled gestational diabetes can raise the risk of complications during childbirth.  Scientists from the National Institutes of Health and Harvard University found that women whose diets before becoming pregnant were high in animal fat and cholesterol had a higher risk for gestational diabetes, compared to their counterparts whose diets were low in cholesterol and animal fats. 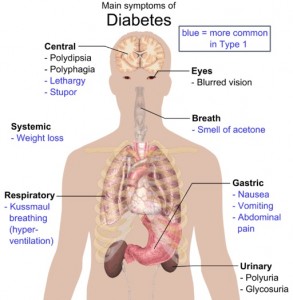 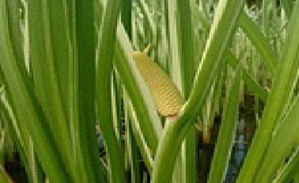 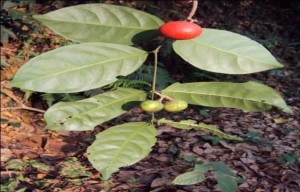 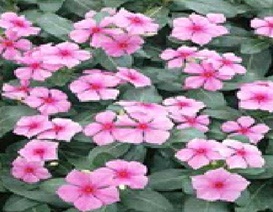 A hot water extract (85-95°C) of A. senticosus stem bark significantly decreased the plasma glucose level without affecting plasma insulin levels and inhibited α-glucosidase activity in diabetic mice. The addition of A. senticosus extract inhibited α-glucosidase activity but not α-amylase activity. Thus it would be useful as an ingredient of functional foods to improve postprandial hyperglycemia and prevent type II diabetes mellitus 7. 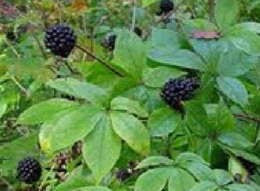 It is a perennial tendril climber found throughout India. It is used in Ayurveda and Unani system of medicine for treatment of diabetes, skin eruptions, tongues sore, earache, etc. 8. Feeding of water soluble alkaloid fraction of alcohol extract (1 gm/kg) of Coccinia indica leaves to normal fasting guinea pigs showed hypoglycemic activity of short duration and the effect was attributed to the presence of beta sitosterol 9. Oral administration (2 gm/kg/day) of pectin isolated from C. indica fruit showed a significant hypoglycemic action in normal rats due to stimulation of glycogen synthetase activity and reduction of phosphorylase activity 10. 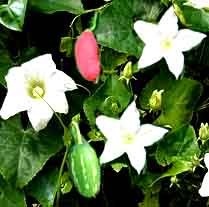 It is found in forests throughout India and is widely used in Ayurveda as tonic, vitalizer and as a remedy for DM and metabolic disorders 11,12. Oral administration of the water extract of Tinospora cordifolia root (2.5, 5 and 7.5 mg/kg) caused a significant reduction in blood glucose, brain lipid level, hepatic glucose-6-phosphatase, serum acid phosphatase, alkaline and lactate dehydrogenase and increase in body weight, total hemoglobin and hepatic hexokinase in alloxanized diabetic rats (150 mg/kg, IP) 13. Oral administration of 400 mg/kg of aqueous extract of TC for 15 weeks of treatment showed maximum hypoglycemia of 70.37, 48.81 and 0% in mild (plasma sugar /180mg/dl), moderate (plasma sugar / 280mg/dl) and severe (plasma sugar /400mg/dl) diabetic rats, respectively. Hypoglycemic effect depended upon the functional status of the pancreatic beta cells 14. 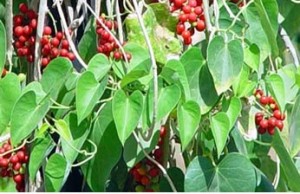 Oral administration of Eremanthin (a compound isolated from the plant C. speciosus rhizome) decreased the HbA1c, serum total cholesterol, triglyceride, LDL-cholesterol level and at the same time markedly increased plasma insulin, tissue glycogen, HDL-cholesterol and serum protein of streptozotacin induced diabetic rats. It also restored the plasma enzyme levels to near normal. Thus it –possessed a significant hypoclycemic and hypolipidemic activities and hence it could be used as a drug for treating diabetes15. 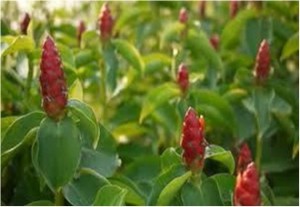 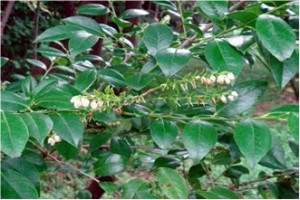 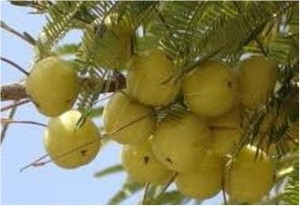 Oral administration of the ethanolic extract of S. auriculata (at a dose of 150 mg/kg of bw) leaf significantly reduced the blood glucose level, SGOT, SGPT, ALP, total cholesterol, triglyceride  and low density lipoprotein-cholesterol (LDL-C) levels to the normal level and significantly increased HDL-C and phospholipid (PL) level in alloxan induced diabetic rats 18. S. auriculata leaf gained much importance in diabetic control as it has been used as a traditional medicine for diabetes; since the phytochemical analysis has shown the presence of potent phytochemicals like flavonoids, terpenoids, glycosides, steroids, saponin and phenols. 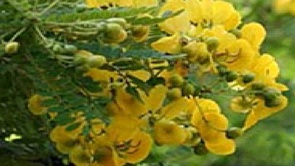 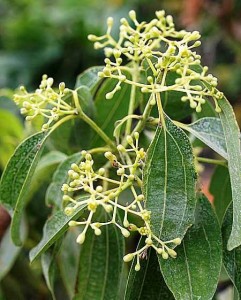 Oral administration of the ethanolic extract of S. potatorum plant material significantly decreased the AST, ALT and ALP level along with reduction of blood glucose level of alloxan induced diabetic rats 21. The alloxan treated rat shows reduced body (26%) and liver (40%) weight. The blood glucose level falls by 53% with extract treatment, demonstrating the antidiabetic potential of the plant. The serum enzymes AST and ALT were increased from 24 and 18 IU/1 to 60 and 65 IU/1 respectively whereas ALP was decreased to 5 IU/1 from 14 IU/1. The total serum protein level also increased up to 5 mg/ml in the extract treated animal. The insulin level also increased up to 61μg/ml within 30 days of extract treatment compared to control with 51μg/ml. The plant extract efficiently decreased the initial cholesterol 219 μg/ml level into 170μg/ml. In liver, the AST, ALT and ALP enzymes were decreased to 160, 60, and 140 IU/1 from 178, 79, and 156 IU/ml respectively 22. 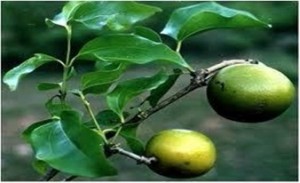 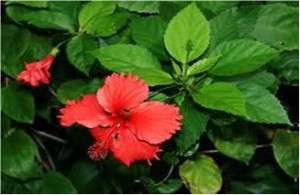 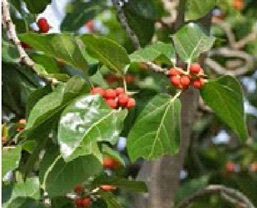 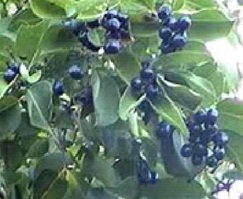 Hypoglycemic effect was studied in the alloxan diabetic male rabbits of different severities: subdiabetic (alloxan recovered; AR), mild diabetic (MD) and severely diabetic (SD). Following single dose administration, there was fall in 1 h and 2.5 h glucose values by 25.9% and 27.4%, respectively, in the subdiabetic rabbits, and by 36.9% and 37.7%, respectively, in the mild diabetic rabbits 28. Oral administration of the ethanolic extract of B. sensitivum whole plant significantly decreased the blood glucose level, serum cholesterol level and increased the total protein level of alloxan induced diabetic rats 29. 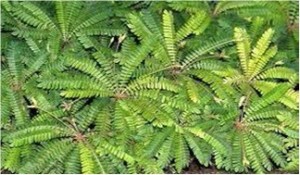 A shrub or small tree grows wild in the warm valleys and outer hills of the Himalayas and also cultivated throughout India. The flowers of Punica granatum are used as anti-diabetic in Unani medicine called Gulnar farsi. Oral administration of aqueous-ethanolic extract (50% v/v) led to significant blood glucose lowering effect in glucose fed hyperglycemic and alloxanized diabetic rats with the maximum effect at the dose of 400-mg/kgbody weight 30. Anti-oxidant activity has been described in the literature 31. 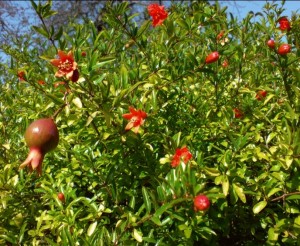