ABSTRACT: Indian medicinal plants and traditional knowledge have been an integral part of our lifestyle since ages and now became an important source for natural product research (NPR) and development. Due to its knowing ability and applications, this knowledge has long been used as a thriving source for discovery of new drug molecules. This study was conducted under the routine drug development program of the Institute with the aim to explore the first-hand ethnobotanical information of 4 important plants i.e. Artemisia nilagirica, Lyonia ovalifolia, Sarcococca saligna and Taraxacum officinale and to correlate their possible applications in future research and developmental activities. The reported information was collected from 86 informants (villagers and herbal practitioners) of Nainital, Almora and Bageshwar districts of Uttarakhand Himalaya, during 2014-2016. The popularity of individual plant species for their ethnopharmacological uses was calculated as percent citation (PC) and cross verified through other informants of studied areas as well as the literature reported for their modern therapeutic applications.

INTRODUCTION: During last decades, ethnomedicinal plants are being reconsidered as one of the main botanical resources for searching novel, bioactive or their derivatives for modern therapeutics to combat different kinds of life-threatening diseases. Many of the known drugs and therapeutic leads have been derived from ethnomedicinal plants used in different traditional system of medicines 1 - 3. It is evident that about 55% of recent chemotherapeutic drugs for the treatment of cancer are derived from plants or based upon natural product research (NPR) 4.

Indian sub-continent is well known for its cultural, social and traditional diversity with several ethnic groups comprised of more than 84.4 million people with age-old culture, traditions, languages, lifestyle and healthcare systems. The greater Himalaya of Uttarakhand, India (3300 - 4290 M) constitutes richest plant diversity with remarkable medicinal flora comprising about 4000 endemic species i.e. 50% of total Indian Himalayan diversity along with a vast ethnobotanical knowledge 5. Due to their significant applications, this knowledge has long been used as a thriving source of bioactive compounds and recent ethnobotanical and ethnopharmacological studies proved folklore knowledge as a powerful tool for searching lead or new drug molecules for modern therapeutics 6-10. Religious inspiration, unavoidable factors of inaccessibility and lack of medicinal facilities in remote hilly areas seems to be the main causative factors for the dependency on local herbal practitioners (Vaidyas) for their primary healthcare. Evidently, chemical and pharmacological investigations on these ethnomedicines have very often provided novel bioactive compounds for modern therapeutics 11-13. Literature reveals that Artemisia nilagirica, Lyonia ovalifolia, Sarcococca saligna and Taraxacum officinale are traditionally well-known plant species in Uttarakhand Himalaya. A systematic search towards validation of ethnomedicinal claims is extremely important and still pending. This paper describes the recent insights of ethnobotanical information collected from 86 informants including common villagers and herbal practitioners of Nainital, Almora and Bageshwar districts of Kumaon, Uttarakhand state during 2014-2016 along with their known pharmacological activities and status of abundance in studied areas. On the basis of these documented insights, the reported plant species are under investigation for their modern therapeutical applications.

MATERIALS AND METHODS: Study sites i.e. Nainital, Almora and Bageshwar districts of Kumaon region, Uttarakhand state were selected for the present study. These sites varied in altitude from 800 MSL (mean sea level) to 1098 MSL, geomorphologic characters, substrate and ecological conditions. During this study (March 2014 to November 2016) a total number of 86 informants (male and female) aged between 45-75 involving common villagers (VG) and recognized traditional herbal healers (HP) known as Vaidyas were interrogated (Table 1). In each locality, all the informants (VG and HP) were interviewed directly in Kumauni and Hindi languages. Interviews were arranged by village level health workers familiar with local languages and the medicinal plants used for the treatment. Information provided by them was cross verified from other localities as well as through literature.

Plant species (Fig. 1) were identified with the local names and identified taxonomically according to the Flora of District Garhwal, North West Himalaya, India 14. Herbarium specimens were housed in Departmental Herbarium CSIR-Central Drug Research Institute, Lucknow, India. The species were listed in alphabetical order by scientific name, local name of the region, family, voucher specimen number and current status of abundance. The popularity of individual plant species being utilized i.e. percent of citation (PC) was calculated as per the following formula 9.

Ethnobotanical uses: Plant is mostly considered sacred and young juvenile leaves are used as incense (Dhoop) during different local ceremonies and also to purify the surrounding environments as a bio-insecticide. Leave juice is also given to children to kill intestinal worms. A paste of mature leaves is used to treat wound and sore. Commercially, young leaves are dried and used as an ingredients of Agarbati (incense).

Ethnopharmacological activities: Plant species is reported as anthelmintics, antiseptic, expectorant, astringent, aromatic, anti-inflammatory, appetizer, digestive and diuretic 15-16 and is one of the most popular genus in Chinese traditional medicine, frequently used for the treatment of malaria, hepatitis, cancer, inflammation and also as antifungal, antibacterial, antiviral remedy 17-19. It is also used to treat cough, asthma, leprosy, skin disease and epilepsy 20-22. The paste of leaves is used as an ointment in fevers and headache and contain cooling properties while juice aid in earache and eye inflammation 23.

Ethnobotanical uses: Plant species is commonly used to prepare various agricultural instruments, fuel, timber and as an important source of timber for construction of traditional houses. Young leaves are poisonous to the cattle, but mature leaves are commonly used as fodder for domestic animals and preparation of organic manures (Cow dung). Moreover, a paste of young twigs and seeds is sometimes used to treat pimples, wounds, and boils 30-31. Leaves are mixed with food grains as a bio-insecticide to protect them during storage 32-33.

Sarcococca saligna (D. Don) Muell-Arg: Locally known as Piruli, Geru, Tilya or Tiliara belongs to family Buxaceae, is an evergreen shrub about 1.5 M high. The abundance of this plant is not very common but found in patches between 1200-2800 M in Oak (Quercus leucotrichophora) and Rhododendron forest of Uttarakhand Himalaya and is also distributed in Kashmir to Nepal, Afghanistan, Myanmar and Sri Lanka 14. Voucher specimen number KRA 24498 submitted to CSIR-CDRI departmental herbarium.

Ethnobotanical uses: The percent citation for ethnobotanical uses of this plant is recorded very low as compared to other plant species (Fig. 1). However, young leaves are used as fodder for cattle and preparation of organic manure. The mature stem is used as fuel. Very rarely the leaf paste is known to use for the treatment of mouth infection and as antipyretic 45. A decoction of leaf and young stem is given for treatment of diabetes.

Taraxacum officinale Weber: English name: Dandelion or bitterwort, locally known as Dudhee, Kanphool and Kanphulya belongs to family Asteraceae is a perennial herb. Commonly distributed throughout Himalayan range up to 4000 M altitude. Density and frequency of occurrence are 0.13 plants/M2 and 7.5% respectively 56. The rate of exploitation is quite higher than its natural regeneration which may cause a serious threat for its genetic erosion in the near future. Voucher specimen number KRA 24497 is submitted to CSIR-CDRI departmental herbarium, Lucknow.

Ethnobotanical uses: Leaves of this plant are advised to use as a vegetable to treat anemic patients. Aqueous extract of roots is given for the treatment of different kinds of urinary problems particularly urinary tract infection, increase the flow of urine to get relieved from pain during urination. It is also used to treat skin problems and cure jaundice. The root extract of this plant is used to treat headache, migraine and liver problems.

Ethnopharmacological activities: In modern therapeutics, it is used to treat infections, swelling, water retention, breast cancer, gall bladder disease, pneumonia, hepatitis, hypolepidemia and oxidative stress etc 57-58. In Chinese, Arabian and Native American traditional medicine, it is used to treat a variety of diseases including cancer 57, 59-61. Roots of this plant are considered as a major source of taraxacin, acrystallin, taraxacerin, taraxerol, taraxerone, arnidiol and faradiol etc 62-64. Moreover, leaves of dandelion have been reported to be rich source of polyphenolic content of which hydroxyl cinnamic acid derivatives are predominant in both flowers and leaves 65-67. Triterpenoids of plant origin have been reported to exhibit in vitro as well as in vivo cytotoxicity with low toxicity against mammary tumors 68-69. This plant was also recommended in FDA list as safe nutraceuticals and has been approved by European council 73. 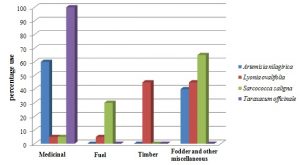 DISCUSSION: Throughout history, nature and its resources have afforded a rich and important source of phytochemicals for different pharmaceutical applications in the field of medicine, cosmetics, pharmacy and biology. Of them, indigenous knowledge of medicinal plants and their uses have been considered as a unique source of raw materials and offer great opportunities for identification and isolation of novel pharmacological agents. These resources showed a strong relationship between ethnopharmacological use and medicinal properties of chemical compounds identified from them. Our recent past ethnobotanical and pharmacological studies also attested and proved its potential and utility to identify and isolate some valuable naturally occurring compounds for various modern therapeutical applications 6-10, 12-13, 70-71.

The higher frequency of percent citation popularity (80-100%) of A. nilagirica, T. officinale and L. ovalifolia (Fig. 1) in their day to day domestic needs and primary health care system reveals the importance of these plants in Uttarakhand Himalaya. Utility and percent citation of these ethnobotanical plants (Fig. 1 and 2) reflected a close relationship between geography, ecology, environment and depending upon the needs of local inhabitants which forced them to utilise these available natural resources on trial and error basis to meet out their day-to-day’s needs as well as to combat their health related problems. The less popularity of S. saligna (5-40%), which is one of the richest sources of natural steroidal compounds and reported to use for the treatment of hypertension 72 indicates the favourable environments to minimize these incidents in studies areas. But on other side, L. ovalifolia and S. saligna have a substantial utility (45-65%) for timber, fodder and other miscellaneous purposes (Fig. 2).

However, the cited chemical constituents of these plants showed tremendous scope for a number of pharmaceutical activities. Sore and wound healing properties of plants sometimes known to possess potential molecules for anti-cancer activities. This survey also provided some new insights on anti-diabetic and wound healing plants. These plants have been considered in our on-going research and developmental activities and their chemical and pharmacological investigations are under progress. The study was also focused to get direct interaction with the user of these medicinal plants to know their importance or new uses, local names, current biodiversity status and kinds of problems associated with their availability, identification, adulteration etc. During survey and interrogation, some informants showed their non-cooperative nature to provide relevant information, because they had some bitter experiences from some of the previous surveyors like bio-piracy and sharing of benefits arises from their indigenous knowledge.

Interestingly, during survey of this study, it was also observed that some of the informants were quite confused with the identity of T. officinale and its closely related genus Launaea. Both the species belongs to the same family and also leaf and flowers of both the plants have quite similarities in their morphology and colors. This improper identification seems to be the strong reason of inadequate authentication and adulteration in their herbal products. For pharmaceutical points of view, the detail pharmacognostical markers need to workout to maintain the quality of both herbal products. Simultaneously, Rapid demand and over-exploitation of T. officinale roots from nature seems to be a serious threat to its existence at their natural habitats and may cause the rapid loss of its population density in the near future.

DECLARATION OF INTEREST: The authors reported no potential conflict of interest.