ABSTRACT: The aim of the present investigation was a systemic review of Trachyspermum ammi L. (Ajwain) coming from the family Apiaceae and its medicinal significance. The seeds of ajwain include approximate three-5% crucial brownish oil, and this species additionally incorporate thymol as the principal chemical constituent at the side of a few different important constituents like β-pinene, α-terpinene, α-pinene, p-cymene, γ-terpinene, and many others. Since ajwain possesses various phytoconstituents, it shows numerous pharmacological and biological properties which have been described. Based on the literature survey, we have focused light upon its pharmacological importance and its future perspective. The present investigation revealed information like its pharmacognostic profile, chemical composition, and its biological activity. These can help a researcher in developing novel entities in the future.

INTRODUCTION: Now a day’s herbal com-pounds as origin of drugs as there is lots of side effects in the synthetic drug. For that reason, the researchers were taking more interest in herbal remedies. Based on the folklore importance, herbal-based medicaments gained importance in treating various ailments. In recent scenario herbal based formulation plays vital role in upbringing pharmaceutical industry 1, 2 by using considering the active additives of the plant, diverse herbal drugs being prepared.

Many researchers have been mentioned that one of the most usually used components for herbal formulations was medicinal oil or crucial oil. T ammi (ajwain) is the most generally recognized vintage herb from the own family Apiaceae. The herb ajwain is a conventional lively, and it is used for healing diverse illnesses in humans. Ajwain or ammi oil is used on neurological disorders, including tremor, paralysis, and continual pains.

The extract of T. ammi (ajwain) has been previously used for the treatment of ophthalmic infections. The Seeds of the plant have been very powerful in curing gastrointestinal diseases. The ajwain also becomes covered as a diuretic and aphrodisiac agent. The main constituent of ajwain oil is thymol. That is received from the seed of the plant. This oil displaying extensive houses like antifungal 3, antiviral and antibacterial 4, antitussive 5 analgesic 6 antioxidant. It is also a considerable remedial element for diarrhea, flatulence, and atonic dyspepsia.

Ecology and Botanical Description: Ajwain is extensively grown in desiccating and semi-desiccate areas 9. The plant is particularly advanced within the area in which the soils comprise eminent tiers of salts 10, 11. Probably in Egypt, this plant was additionally cultivated in Afghanistan, Pakistan, Iraq, Iran, Greeks, and India 12. In India, the plant ajwain is advanced within the states of Uttar Pradesh, Rajasthan, Punjab, Gujarat, Madhya Pradesh, Tamil Nadu, Bihar, and Andhra Pradesh, and so on. Ajwain develops well on dirt soil at a pH variety 6.5-eight.2 at temperature of between 10 -25 ºC and RH (relative humidity) between 65-70%. Commonly the harvesting of this plant is accomplished in the course of earlier in spring and later in wintry weather.

The plant ajwain is an abundantly branched fragrant annual herb and approximately almost 60-90 cm in peak. The Stem is a blossoming compound containing sixteen umbellets and striates every umbellet retaining up to sixteen floras. The flora are white action-morphic. It contains 5 corolla, 5 stamens petals and bilobed. Also the fruit of the plant are aromatic, cordate, and ovoid Fig. 1. Leaves are pinnate on the terminal and contain 7 nos of pairs of lateral leaflets Fig. 2 13. Fruit are grayish-brown in color, ovoid and compressed, and it includes 2 nos of mericarps Fig. 3. 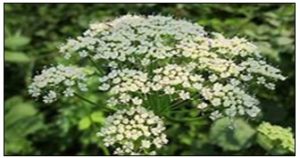 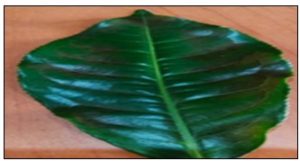 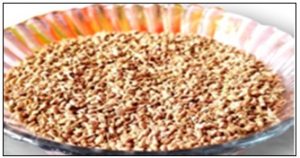 Microscopic Characters: The microscopic evaluation of the transverse part of the ajwain fruit indicates the presence of two carpophores. They may be hexagonal in systems and are connected with every different. The epicarps of the end result includes a unmarried layer of tangentially extended tabular cells and the mesocarp includes averagely square to polygonal tangentially prolonged tabular cells bearing about carpophores, vittae  and vascular bundles reveal  as a groups of thick-walled significantly extended cells. The endosperm of the end result bearing skinny surrounded cells, which might be packed with oil globules, embryo, round and small polygonal cells 14.

Pharmacognostic Profile: A Pharmacognostical assessment of any herb serves as identification marks over and above it additionally assist in the standardization of drug concerning their purity and first-rate. Its demonstration in detail organoleptic and physicochemical residences of the crude drug Hardel Danendrakumar et al. 15 described in an element about Organoleptic and Physicochemical homes of the drug Trachy-spermum ammi L (ajwain) given in Table 1.

Qualitative Phytochemistry: The qualitative investigation of the Trachyspermum ammi, powder shows the presence of various secondary metabolites such as carbohydrates, glycosides, fixed Oils, and Steroids.  The ethanolic extract of the ajwain seeds indicate the presence of Tannins, and reducing sugar along with the ether and petroleum extract demonstrate the presence of proteins, alkaloid, Sterols, amino acids. Katasani D, Srinu B et al. 16 described in detail about phytochemical properties of the ajwain seed.

Phytochemical Characteristics: The various phytochemical constituent obtained from the ajwain is decided by using numerous parameters including nature of the soil, climatic situations like temperature, pressure, humidity and extraction time additionally indicates the massive effect on the overall % yield and chemical composition of ajwain oil. From the GC–MS research of the vital oil oculmination of T. ammi are verified in Table 2. It disclosed that the presence of just about twenty compounds. The important oil of the ajwain accommodates two aromatic terpenes along with thymol and carvacrol. The aromatic terpenes of the oil constituted about 37.38% of thymol. However, the most important elements are acyclic monoterpene, monocyclic monoterpenes and bicyclic terpenes. The cell of acyclic monoterpene β-Myrecene. Monocyclic monoterpenes are m-Cymene (21.44 %), γ-Terpinene (26.01%), 4-Terpinenol (0.81%), and β-Phellandrene (1.60%) 17 Table 2. And the bicyclic terpenes are α-Pinene and β-Pinene, four-Caren, β-Pinene, and α-Thujen. similarly the crucial oil of the ajwain fruits additionally contained a few non-terpenoid kind of components that are 1-(3-isopropyliden-2.2-dimethylcyclopropyl) - isopropanon; 14.6.6-trimethyl - bicyclo [three.1.1]-hept-three-ene-2- one; 6-methyl-octene-1; 2.2-dimethyl-four.5- bis-1-propene-1.three-Dioxalane Table 2. Also, many of the researchers have looked at its many active phytoconstituent obtaining from the seed and leaves of the plant T. ammi (ajwain). They are demonstrated in Table 3.

TABLE 3: PHYTOCHEMICALS PRESENT IN THE SEED, FRUITS AND LEAVES OF THE T. AMMI

Geographical Climatic and Their Relation with Chemical Constituent of Ajwain: The numerous chemical constituent of ajwain is stricken by exclusive geographical, climatic circumstance. From the various investigations, it became stated by using many scientists. The outcomes of the various findings disclosed the presence of thymol, β-pinene, o-cymene γ-terpinene, p-cymen and γ-terpinolene as a major factor. But, the ajwain gathered from Pakistan suggests the presence of p-cymene-three-ol as a primary issue and additionally display the presence of α-pinene, carvacrol and β-myrcene as minor constituents 23, 24, 25, 26 further, the vital oil from the ajwain seed collected from Iran (Sabzevar) establishes the presence of various chemical constituent as compared to other studies research. Almost approximately 50 predominant compounds comprising ninety 5% of the full essential oil had been authenticated 27.

One research scientists from Egypt additionally has reported the presence of non-terpenoids as a wealthy supply and the δ-cadinene (3.5%), hexadecanoic acid (27.5%), germacrene D (4.3%), isobutyl phthalate (5.8%), α-cadinol (4.7%), ethyl linoleate (8.5%)  and 6-methyl-α-ionone (8.0 %), as a constituent from the ajwain seed amassed from Egypt 28. The crucial oil received from the ajwain seed accrued from India also encompass monoterpenes group including β-selinene, β-phellandrene, cymene, α-pinene, β-pinene, γ-terpinene, terpinolene, myrcene, α-thujene.

It is extensively utilized for curing belly tumors and many others, which are described briefly inside the underneath followings.

CONCLUSION: Trachyspermum ammi (Ajwain) is an essential, widely known, and used medicinal plant on account of those historic instances; this specific plant has wide founded and hidden medicinal and dietary use. Formulating drugs from indigenous plants from conventional knowledge primarily based of drugs at gift turning into proper interest because of the secure, innocent and without difficulty available. From the final decade to present, various natural compounds of plant foundation that have ethnobotanical applications have getting to a good deal problem. Trachy-spermum ammi (Ajwain) has various traditional applications like gastrointestinal illnesses, antihypertensive, bronchodilating, and anti-spasmodic hepatoprotective and anti-hyper-lipidemia and plenty of different illnesses. This plant is fertile in carbohydrates, protein, vital oil, phosphorus, calcium, minerals, fiber, carotene iron, and numerous nutrients like thiamine, riboflavin and niacin. Because of the presence of an expansion of essential issues, it's far answerable for its numerous organic and healing properties. This assessment is a try to furnish nicely accumulated clinical information of the Trachyspermum ammi.

ACKNOWLEDGEMENT: It is our profound privilege to express our gratitude and sincere thanks to Rahman Institute of pharmaceutical sciences and Research (RIPSR) Tepesia, Sonapur, Kamrup (M). I wish to express my sincere thanks to all my well-wishers for their interests, support, and cooperation during my work.

CONFLICTS OF INTEREST: All the authors have no conflicts of interest.