ABSTRACT: The fruit of Phoebe cooperiana U.N Kanjilal ex A. Das is highly priced and one of the most preferred folk food among the Indigenous people of Arunachal Pradesh, India. The methanol extract of fruit collected from East Siang District of Arunachal Pradesh, India were evaluated for total phenolic content, total flavonoid content and antioxidant potential. The methanol extract of fruit were subjected to 2, 2-Diphenyl-1-picrylhydazyl (DPPH) assay for free radical scavenging property and ABTS radical cation scavenging activity to determine antioxidant potential. Folin-Ciocalteu’s method for quantification of total phenolic content and colorimetric method for quantification of total flavonoid content were used in the experiment. Ethnobotany, mode of cooking, demand of fruit in the local market and unscientific harvest from forest and resultant threat on the plant is discussed in the paper. The methanol extract contains considerable phenolic (33.93±1.14 mg GAE/g) and flavonoid (941.5 ±5.31 µMRE/g) but no significant correlation between the total content of phenolic and flavonoid and antioxidant potential was found as IC50 value of 94.6±1.35µg/ml was found  in ABTS assay and IC50 value of 279± 12µg/ml was found in DPPH assay.

INTRODUCTION:Indigenous people in different parts of the world have their distinct culture and customs. Mostly they are inhabitants of mountainous regions and closely associates with river, forest and land since time immemorial and use available resources for their food, medicine, clothes and house.

Arunachal Pradesh, an Indian state lies in North East of India, is a home of 26 major tribal people and more than 110 sub-tribes. The traditional practices, festive celebrations and traditional knowledge is as rich as the tribes itself,  geographical isolation from the Indian mainland has brought them certain distinctive characteristics in culture and customs, the state has many dimensions in food habits and flavour.

Wild food plants are potentially important nutrient and cultural resources for local people around the world. They also contain higher amount of nutrients and bioactive compounds than many cultivated species, especially which have been under cultivation for many generations 6. Garcinia pedunculata, a wild fruit eaten among tribal people of North East India has been reported to potent antioxidant 7. The gap between wild edible fruits and cultivated ones is wide and needs to be bridges by shading more light on potential wild food biodiversity else the high nutritional quality and unique taste of these wild fruits are likely to be lost 8. Fruit of Phoebe cooperiana is use as food by indigenous people of Arunachal Pradesh. Locally the fruit is called tapir aye, hisir or singsir.

Phoebe cooperiana (Lauraceae) is a tall timber tree with a compact crown and a clean bole of 15-18m length found in tropical forest up to an elevation of 600m (fig. 1). Bark is greyish, articulately furrowed, splitting into flakes 9. It is known for its quality timber. Fruit is 2-3.5 cm long, ellipsoid, the immature fruit is greenish and black on ripe (fig. 2), inner part of the ripen fruit is oily, yellowish green with characteristic aroma and bitter taste. The fruit is also eaten by birds and wild animals, now a day it is rarely seen in the forest because of its selective felling for valuable timber mainly by plywood industries 10. Nursery technique of the plant has been developed by State Forest Research Institute Itanagar, Arunachal Pradesh. Seed viability is reported as sixty days, 30-60 days of germination period with 65% germination rate 11.

Present study was carried out to determine total phenolic content, total flavonoid content, antioxidant potential demand and selling of the fruit in the Pasighat market (local market) and ethno botanical aspect of the fruit of Phoebe cooperiana which is used as folk food among tribal people of Arunachal Pradesh. 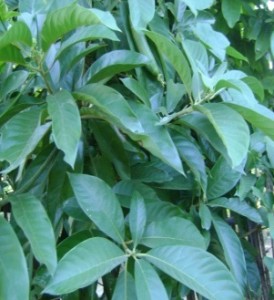 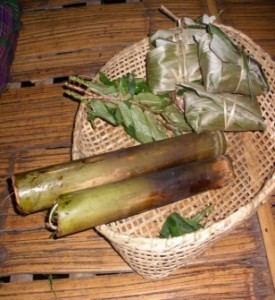 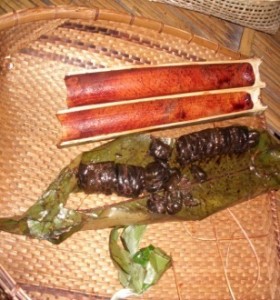 Field survey: The folk food botanical survey was carried out from June –December 2012 in East Siang District of Arunachal Pradesh keeping the folk use of Phoebe cooperiana fruit as target. Local guides and informers were used to locate the plant. Personal interviews were held with old women and man.  Market survey was done at Pasighat market in East Siang District of Arunachal Pradesh, India twice in a week during the study period, Regarding price, source, season of availability and income, questions and interviews were carried out to wild vegetable sellers, local vendors, and villagers.

The selling unit of Phoebe cooperiana fruits were found to sold in five pieces per unit for ₹ 20/- at the rate of ₹ 4 per fruit and  one kilogram of the fruit contain around 94-100 fruits. The fruit starts available in market from the month of August to October. While interacting with indigenous elders and Gao Bhuras, it was revealed that in those early days Phoebe fruits were collected from jungle when the fruit ripe and fall on ground else by looping the branch, but these days villagers cut down the tree to collect fruit to be sold in local market.

Preparation of crude extract: Fresh ripen fruits were collected from Pasighat market in East Siang District of Arunachal Pradesh, India. Fruits were cleaned with distilled water before mesocarp were separated from seed then oven dried at 60 degree Celsius till constant weight was achieved. Dried mesocarp was grinded in laboratory mill and kept in air tight container for future use. 100g powder were soaked in 500 ml methanol overnight and filtered through Whatman paper No. 41.

The residue was re-extracted twice with 500ml of methanol each. The total filtrate was concentrated by rotatory evaporator at 45oC under reduced pressure and stored at -4oC until analysed.

Determination of Antioxidant Activity using 2, 2-Diphenyl-1-picrylhydazyl (DPPH) Free Radical Scavenging Method: The antioxidant activity was determined according to the method of Aoshima et al 12. Briefly, to 100 µl of sample extract, or standard, 2.9 mL of DPPH reagent (0.1mM in methanol) was added and vortexed vigorously. The reaction mixture was stored in the dark for 30 minute at room temperature and decolouration of DPPH was measured against a blank at 517 nm using an ultraviolet-visible (UV-Vis) spectrophotometer (Lamda-25, Perkin Elmer, Cambridge, UK). Linear calibration curves were produced with R2= 0.9994 (Fig. 5) and result was calculated as trolox equivalent per gram dry sample. The inhibition % was calculated using the formula: 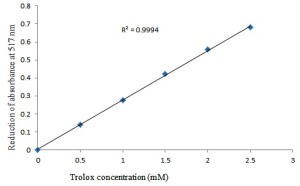 ABTS Free Radical Scavenging Assay: The ABTS radical cation scavenging activity was performed according to Re et al 13 with slight modifications. The ABTS solution (7mM) was reacted with potassium persulfate (2.45mM) solution and kept overnight in dark to yield a dark green-colored solution containing ABTS radical cation. Prior to use in the assay, the ABTS radical cation was diluted with 50% methanol for an initial absorbance of about 0.700± 0.02 at 743nm using UV-Vis spectrophotometer with the temperature set at 30oC.

Free radical scavenging activity was assayed by mixing 100µL of test sample with 2.9ml of an ABTS working standard in a microcuvette. The decrease in absorbance was measured at exactly 1 minute after mixing the solution and then at 1 minute intervals up to 6 minutes when final absorbance was recorded. Linear calibration curves were produced with   R2= 0.9988 (Fig. 6) for evaluation of antioxidant activity in ABTS and result was calculated as trolox equivalent per gram dry sample. The inhibition % was calculated using the formula: 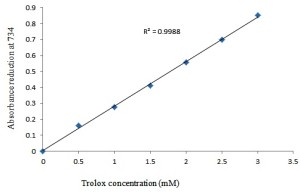 Determination of Total Phenolic Content: Total phenolic content was determined by the Folin-Ciocalteu method 14. Briefly, to 900µL of distilled water and 1mL of the Folin-Ciocalteu reagent 100µL of filtered extract was added. After 5 minutes, 2mLof saturated sodium carbonate (75g.L-1) and 2 mL water was added.

Absorbance of the resulting blue- colored solution was measured at 765nm using UV-Vis spectrophotometer after incubation at 30oC for 1.5 h with intermittent shaking. Quantification measurement was performed based on a standard calibration curve of 20, 40, 60, 80 and 100mg/100mL of Gallic acid in 80% methanol. Total phenolic content was expressed as Gallic acid equivalent (GAE) in the dry sample. Linear calibration curves were produced with R2=0.9989 (Fig. 7). 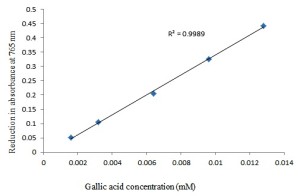 Determination of Total Flavonoid Content: Total flavonoid content was determined by using the colorimetric method of Sahreen and Khan 15 with slight modification. 50mg of sample was dissolved in10 ml of 80% aqueous methanol and filtered through Whatman filter paper No. 42 (125mm). In a 10mL test tube, 0.3ml of extract, 3.4 mL of 30% methanol, 0.15 mL of 0.5M sodium nitrite, and 0.15 mL of 0.3 M aluminium chloride hexahydrate were added and mixed. After 5 minutes, 1mL of 1M sodium hydroxide was added. The absorbance of the mixture was measured at 510 nm using UV-Vis spectrophotometer (Lamda-25, Perkin Elmer Cambridge, UK) and values were express as rutin equivalent antioxidant capacity. Linear calibration curves were produced with R 2=0.9994 (Fig. 8). 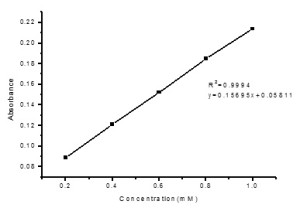 Statistical Analysis: All the assays were carried out in triplicate and the experimental results obtained were expressed as mean±SD. IC 50 value was calculated by plotting nonlinear regression curve using Graph Pad Prism 5 software.

Ethnobotanical use of Fruit: The fruit of phoebe cooperiana is use as food by the indigenous people of Arunachal Pradesh; the fruit is separated from seed and eaten raw or cooked. Raw fruit is eaten without any other ingredients like salt and chilly. When cooked, the fruit is mixed with chilly, ginger and salt then cooked in following methods:

(a)   The fruit is cooked preferably in immature bamboo calm (fig. 4) called “pinam” in indigenous dialect and;

(b)  Fruit is also cooked by wrapping in leaf of Phyrenium and Ammomum species (fig. 3) then buried under hot soil of the fire place. The cooked fruit is taken with rice or served with local black beer called “apong” in Adi.

DPPH Assay: DPPH assay is one of the methods used to determine the antioxidant potential of plant extract 16. DPPH method is based on decrease in purple/dark violet colour of alcoholic DPPH solution 17, 18 when contracted with antioxidant substances like phenolic compounds and have a strong absorption range at 517 nm 19.

Total antioxidant necessary to decrease the initial DPPH radical concentration by 50% is referred as IC50, thus, a lower IC50 reflect greater antioxidant activity of the sample 20. The DPPH Assay of Phoebe cooperiana fruit is calculated as 405.76µM/g±2.24 with IC50 value of 279± 12µg/ml.

ABTS:  The pre-formed radical cation of 2,2'-azinobis-(3-ethylbenzothiazoline-6-sulfonic acid) (ABTS*+) is generated by oxidation of ABTS with potassium persulfate and is reduced in the presence of such hydrogen-donating antioxidants 13, the ABTS assay of the fruit of  Phoebe cooperiana was evaluated to268.114µM/g±4.13 with IC50 value of 94.6±1.35µg/ml.

TABLE 1: TPC, TFC, ABTS AND DPPH VALUES OF THE METHANOLIC EXTRACT OF THE FRUIT OF PHOEBE   COOPERIANA

CONCLUSION: The phoebe cooperiana is a useful timber tree and fruit is highly preferred folk food among indigenous people of Arunachal Pradesh, the fruit is also edible to birds and animals. The fruit contain high phenolic and flavonoid compounds with considerable antioxidants wild edible fruit (table 1). The ecological threat to the plant and associated species is very high due to high demand of timber and fruit. The plant need conservation and strict vigilance under village level committee, forest Department and other Organisations.

The awareness on scientific collection of the fruit is needed to the local folk; else the plant is at the verge of extinction in one of the biologically hot spot region of the world.

ACKNOWLEDGEMENTS: The authors of this paper are highly grateful to the scientist in-charge CSIR-North East Institute of Science and Technology Branch, Itanagar, Naharlagun, Arunachal Pradesh, India for providing the laboratory facilities.