Pyrus pashia Buch.-Ham. ex D. Don is distributed in the Himalayan region with great ethnic uses. Leaves of P. pashia are consumed as butter tea beverages by the Monpa community of Tawang, Arunachal Pradesh (India). The pulverized leaves were extracted using accelerated solvent extractor (ASE) in different organic solvents with increasing polarity. The leaf extracts of P. pashia were evaluated for the free radical scavenging activity by 2, 2-Diphenyl-1-picrylhydrazyl (DPPH) assay and total phenolic content (TPC) were determined by Folin Ciocalteu’s method. The methanolic and water extracts shows strong free radical scavenging activity with IC50 values of 10.81±0.44 µg/ml and 11.57±0.36 µg/ml respectively. The methanolic extract has the highest TPC value of 351.16±0.43 mg/g. The study highlighted the antioxidant potentiality of Pyrus pashia Buch.-Ham. ex D. Donleaves and confirms it as a healthy beverage taken by the Monpa community.

INTRODUCTION: Ethnobotany had played a major role in identification of medicinal and aromatic plants responsible for drug discovery. All over the world, there has been an increasing interest in the scientific study of man-plant interaction in the natural environment by ethnic peoples 1. Ethnic people are well versed with their flora, and plants used by them in medicinal purposes are rich in secondary metabolites and other bioactive compounds. A large number of drugs have been isolated from plants, based on ethnobotanical knowledge 2.

Pyrus pashia D. Don (Rosaceae) is distributed in the forest of Himalayan region from North East India to Hindu-Kush Mountain range far west of Afghanistan. P. pashia commonly known as wild pear is a medium size deciduous tree and the plant is used especially in the treatment of digestive related ailments 3.

Ripen fruits are reported as edible by many tribes, tender leaves and twigs are used as fodder, leaf extract is used as a tonic for hair loss and woods are used as a major fuel source in the central Himalayan region 3-6.It has also significant antimicrobial activity against Klebsiella pneumonia, Shigella flexneri and E. coli 7. The leaves are consumed as tea beverages by the Monpa Community of Tawang, Arunachal Pradesh (India). Tawang is located between 27°27′N -27°53′ N latitudes and between 91°33′ E - 92°28′ E longitudes covering an area of 2,085 km2 in the eastern Himalayan region (Figure 1). The district is bounded by two international borders - Tibet (China) in the north and Bhutan in the south to south west. Two prominent rivers flow through the region - Tawang Chu and Nyamjang Chu. Most of the villages located on either bank of these rivers and are largely depend on forest based beverages.

Based on this ethnic knowledge, the present study was undertaken to determine the free radical scavenging activity and total phenolic content (TPC) of P. pashia leaves extract in different solvents. 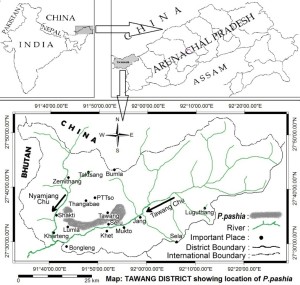 Ethnobotanical investigation and collection of plant material: Ethnobotanical studies have been carried out in many villages as a part of research programme on exploration of wild edible plants. Voucher specimens were collected from community forest area of Seru village under Tawang district in the month of July 2011.

The species were identified at Botanical Survey of India, Itanagar (Arunachal Pradesh) and deposited at Plant Systematic and Pharmacognosy Research Laboratory, Department of Botany, Rajiv Gandhi University, Doimukh [Reference No: B.S.I. (E.C.) 77697; Voucher specimen No. JT/HT/057/2011]. Autumn leaves from five mature trees were collected in the month of November 2011 for phytochemical analysis.

The final volume was concentrated to dryness by rotary evaporator at 50°C and under reduced pressure. The crude extract were weighed and stored at -4°C.

Preliminary Phytochemical Analysis: The methanolic extract of the plant were analyzed qualitatively for phytochemical content by standard methods given by Raaman 8.

DPPH assay for determination of Free Radical Scavenging Activity: The DPPH assay was done by the method given by Brand-Williams et al., 9 with some modifications. 0.1mM DPPH solution in methanol (4.44mg in 200ml) was freshly prepared. Plant extract solution of 1mg/ml was prepared in methanol and varying concentration (1-500 µg/ml) was achieved by serial dilution method.

750µl plant extract solution of varying concentrations were mixed with 750µl of DPPH solution in 1.5ml disposable cuvette and kept for 30 minutes in dark at room temperature (28°C). The mixture of methanol and extract solution of corresponding concentration was used as blank sample. Mixer of 750µl methanol and 750µl DPPH solution was used as control. Ascorbic acid at various concentrations (1-100µg/ml) was used as reference standard. All test samples and reference were assayed in triplicate and the absorbance (A) was measured at 517 nm using UV-Vis spectrophotometer (SPECORD-250 Analytic Jena, AG, Germany). The inhibition % was calculated using the following formula:

The free radical scavenging activity was expressed as IC 50 (µg/ml) which was determined by non linear regression curve. Concentration values were transformed into log values {X=Log(X)} and curve was plotted by dose response inhibition in Graph Pad Prism-5 software. Results were expressed as mean±SD.

Determination of Total Phenolic Content (TPC): TPC of the plant extracts were determined by the Folin-Ciocalteu’s method given by Singleton and Rossi 10 with some modifications. 0.2 ml plant extract (1mg/ml) was mixed with 2 ml distilled water. To this 0.3 ml of Folin-Ciocalteu’s phenol reagent was added and mixed well. After 5 minutes 0.8 ml of 20% NaCO3 in water was added and final volume was made to 5ml. The mixtures were kept for 2 hrs at room temperature (28°C) and the absorbance were measured at 765 nm using UV-Vis spectrophotometer (SPECORD-250, Analytic Jena, AG, Germany). Reaction was carried out in triplicate. Gallic acid at concentrations 0.02, 0.04, 0.06, 0.08 and 0.10 mg/ml in water was used to create standard curve (y=a+b*x).

Where, c is the concentration of gallic acid established from the calibration curve (mg/ml); V is the volume of plant extract (ml); and m is the weight of pure plant extract (g). Results were expressed as mean±SD in mg/g [Gallic Acid Equivalent (GAE)/dry weight (dw)].

Ethnobotanical Findings: Monpa community is well versed with a variety of wild plants which are consumed as beverages. One of the easily accessible and most common plants is P. pashia (Figure 2) in the Tawang area of Arunachal Pradesh, India. The plant is distributed in temperate mixed deciduous forest on the upper bank of Tawang Chu lying at an altitudinal range between 8,300-10,000 feet (Figure 1).

Autumn leaves are collected from the ground floor during the month of October to December. The leaf produces magnificent color during the preparation of butter tea. Leaves are washed with water and allowed to dry in mild sunrays. 4-5 mature leaves are added in the preparation of approximately 2 liter butter tea. The leaves can be reused twice but their color is reduced. The Monpa community is fond of butter tea and a hard working Monpa farmer consumed up to 1-2 liters butter tea a day. 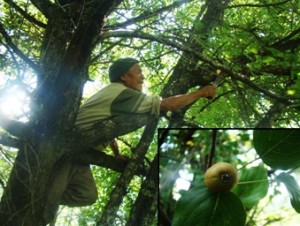 Extract yield and Phytochemical Screening: Yield of extract is given in Table 1 which is recorded highest in water followed by methanol. Preliminary phyto-chemical analysis confirms the presence phenolic compounds in methanolic leaf extract of P. pashia. The analysis also showed the presence of alkaloids, carbohydrates and saponins in leave extract.

Hence, lower the IC50 value, higher will be its antioxidant property. The lowest IC50 value was found in methanolic extract which is comparable to that of standard (Ascorbic acid)(Table 1).  The IC50 value of water extract is also considerably low but hexane and ethyl acetate extracts have very high IC50 values (>300 µg/ml). 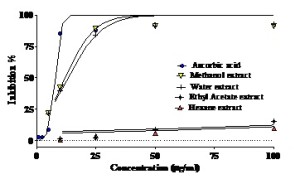 Total Phenolic Content (TPC): Gallic acid standard curve with equation y=0.0833+14.5589*x; R2=0.9944, is shown in Figure 4 and TPC is shown in Table 1. TPC was found high in methanolic and water extracts of P. pashia leaves whereas it is almost nil or zero in hexane and ethyl acetate extracts.

Positive correlation was found between TPC and IC50 value which confirms that phenolic compounds present in P. pashia leaves are responsible for its strong antioxidant activity. 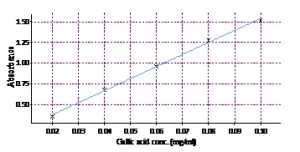 CONCLUSION: The leaves of Pyrus pashia are having potent antioxidant activity. The IC50 is close to that of standard ascorbic acid. The leaves are rich in phenolic compounds which is responsible for its antioxidant property. The plant is consumed as non-fermented tea beverage by the Monpa community of Tawang district; Arunachal Pradesh (India) and the present finding partially validate their traditional knowledge about the goodness of consumption of this plant. The findings of this study provide a firsthand information in developing antioxidant based beverage products. Further study is going on to isolate the bioactive phytochemicals.

ACKNOWLEDGEMENT: The authors are thankful to the Director, Defence Research Laboratory (DRL), Tezpur (Assam) under Defence Research and Development Organization (DRDO), Ministry of Defence, Government of India for sanctioning the Project No. DRLT-P1-2010/Task-36 dated 11/11/2010.