ABSTRACT: The present exploration is an attempt to an ethnobotanical study was conducted in Eastern Ghats of Tamil Nadu, for the investigation of a medicinal plant used to treat several diseases by the local health healers by Gedamalai Tribes, Namakkal District. Data were collected during March 2015-January 2016. Quantitative analysis, including the informant consensus factor and use-value was performed to evaluate the medicinal plants. A total of 40% of women reported high affiliation with herbal remedies for gynecological problems, while others attribute was also positive for medicinal plants. A total of 27 species belonging to 23 genera and 19 families were recorded. This result also proved that the plant is used either the whole plant or various parts like leaves, stem, root, flower, seed, etc. The plant parts are used in the form of decoction, juice, paste, and powder. These plants were used to treat gynecological disorders. The botanical names, families, vernacular names were also given along with medicinal uses.

INTRODUCTION: Ethno-medicinal studies are significant for the discovery of new crude drugs from reporting indigenous medicinal plants. Right from the commencement of ethnobotany with special emphasis on the documentation of traditional medicinal, the population in such countries is dependent on traditional medicines 1, 2. Since time immemorial, man has used various parts of plants in the treatment and prevention of many ailments 3. According to estimations, more than 50,000 flowering plants have been used for medicinal purposes throughout the world 4.

India is where Siddha and Ayurveda medicines are common, and the Traditional healers, spread all over the country have immense knowledge in curing many human diseases by using medicinal plants 5. Indigenous Knowledge is a potential tool in searching for new economic plants for uses of medicinal plants for various purposes by tribal.

Ethno-gynecology is a traditional approach of indigenous tribes to deal with female health issues. Medicinal approaches or knowledge incorporating plants or any other natural / spiritual therapies used to treat gynecological problems such as abortion, menstrual pain, menopause, morning sickness, leucorrhoea, infertility, delivery problems, among others, are taken into consideration 6, 7. Gynecology is the medical treatment of the female reproductive system (uterus, vagina, and ovaries) health. Ethnogynaecology is an emerging new branch that deals with the healing of ailments among tribal women, for example, abortion, menstrual trouble, leucorrhoea, anti-fertility, and delivery problems 8. Menstrual disorders are generally not perceived as major health concerns by global health organizations. These ailments require effective, safe medications because they can disrupt women’s daily activities. Due to limited access to analgesics and sanitary facilities, women in various localities across the globe (Latin, America, Africa, or Asia) prefer traditional medicines, 9.Ethno-Medicinal research is important aspects of ethnobotanical research. Tribal people are very knowledgeable about the use of plants against various diseases. Ethnogynaecology is a new field of study that deals with various diseases among women in tribal societies related to sterility, conception, abortion, etc… very little work has been done on the ethno-gynaeological use of plants in the treatment and healthcare programmed of women. This study aims to record information on medicinal plants that are being used from traditional medicinal practitioners plant species used effectively to treat the gynecological disorders have been discussed in detail Gedamalai used for gynecological disorders. In the present work, 27 plant species were used effectively to treat gynecological disorders.

MATERIALS AND METHODS: The ethnobotanical study was carried on a survey basis. The survey regarding the usage of medicinal plants available in the local area for treating various gynecological problems was collected by the prescribed procedure 10. Extensive field trips were conducted between collected during March 2015-January 2016 in the Gedamalai, Namakkal district, Tamil Nadu. The information on gynecological uses of plants was collected by interviews with old age members of Gedamalai tribe, tribal healer and mid tribal wife. The plant species were identified with the help of floras 11 and documented. Information collected on ethno-gynecology was assessed in terms of Botanical name, Vernacular name, Habit, Family, Useful Parts, Ailments, and Therapeutic action. 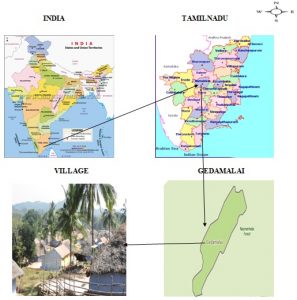 RESULTS AND DISCUSSION: Gedamalai region people were using 27 species of plants belonging to 19 families Table 1 for medicinal use. Among them 10 were herbs, 6 were shrubs, 2 were small trees, 9 were big trees, and 2 were climbers. The most commonly represented families were Caricaceae (2), Caesalpiniaceous (2), Pedaliaceae (2), Moraceae (2), Meliaceae (2)  Mimosiaceae (2) and Fabaceae (3) Asclepidaceae, Apocynaceae, Solanaceae, Sapindaceae, Gentiaceae, Acanthaceae, Apiaceae, Poaceae, Euphorbiaceae, Myrtaceae, Liliaceae (1) and  Malvaceae (1 species each).

TABLE 1: MEDICINAL PLANTS USED FOR THE TREATMENT OF ABORTION

TABLE 2: MEDICINAL PLANTS USED FOR THE TREATMENT OF AMENORRHOEA

TABLE 3: MEDICINAL PLANTS USED FOR THE TREATMENT OF CONTRACEPTION

TABLE 4: MEDICINAL PLANTS USED FOR THE TREATMENT OF DYMENORROHEA

TABLE 5: MEDICINAL PLANTS USED FOR THE TREATMENT OF EXCESSIVE BLEEDING AFTER DELIVERY

TABLE 6: MEDICINAL PLANTS USED FOR THE TREATMENT OF FEMALE STERILITY

TABLE 7: MEDICINAL PLANTS USED FOR THE TREATMENT OF HAEMORRHAGE

TABLE 8: MEDICINAL PLANTS USED FOR THE TREATMENT OF LABOUR PAIN

TABLE 9: MEDICINAL PLANTS USED FOR THE TREATMENT OF MENORRHAGIA

They were using these plants to cure diseases like abortion, amenorrhoea, contraception, dysmenorrhea, excessive bleeding after delivery, female sterility, hemorrhage, labor pain, menorrhagia, menstrual disorder, normal delivery. Medicines were prepared in the form of powder, decoction, paste, and juice. It was also observed that some plants were used in more than one form of preparation. The bark is found as the most widely used plant parts (3 species) followed by leaves (8 species), root (6 species), seeds 8 and fruits (5 species), whole plant (8 species) flower (2 species) tuberous root (1 species) were documented.

TABLE 10: MEDICINAL PLANTS USED FOR THE TREATMENT OF MENSTRUAL DISORDER

TABLE 11: MEDICINAL PLANTS USED FOR THE TREATMENT OF NORMAL DELIVERY 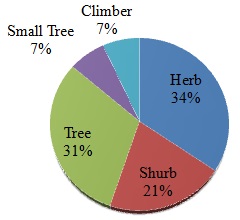 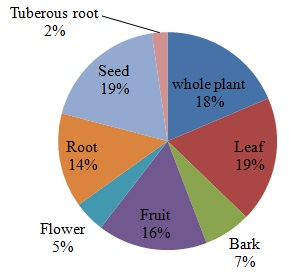 CONCLUSION: The present study was focused on rural women’s health and treatment. Herbal medicines are like a blessing in rural areas, where modern medical facilities are not available or insufficient. Diversity and efficacy of medicinal plants, along with the positive attitude of local people towards herbal medicines for the treatment of gynecological problems in the study area favored the aims of this study to document this treasure. Old women had a greater relation to indigenous plants, and they have potential information on the medicinal values of the indigenous plants. Younger generations have more relation with allopathic medicines that lead to the decrease of indigenous medicinal knowledge. Furthermore, this study will also be useful for the conservation of medicinal flora in the future.

ACKNOWLEDGEMENT: The authors are thankful to the villagers for their kind co-operation during field investigation and sharing of experience and expertise in ethno-gynaecological disorders and their indigenous knowledge tribal peoples.

CONFLICTS OF INTEREST: The authors declare that there are no conflicts of interest among authors.