Ethnobotanical study was conducted in district Rajouri, Jammu And Kashmir State aiming at identifying plants used to treat chest diseases mainly related to respiratory system. A semi-structured questionnaire was used to interview members of the tribal population including traditional healers, herb sellers, and other villagers. The plant parts used as well as the modes of preparation and administration were recorded. Thirty one plant species belonging to twenty four families were collected and identified by their vernacular and scientific names. The Asteraceae, Acanthaceae, Pinaceae were the most represented family with three species each, followed by the Anacrdiaceae, Euphorbiaceae and Fabaceae with two species each. All the remaining 15 families were represented by one species each. The plant part most frequently used to treat respiratory diseases in the study was reported as Root followed by leaf, flower, fruit, bark and seed. Also many other plant parts including rhizomes, galls, buds, resins and latex were found in use in various formulations for chest diseases cure.

INTRODUCTION:For thousands of years beside food and shelter, plant have been used a source of medicine by the mankind. Historically plants are the first ever source of  medicine discovered by man through hit and trail method.

The Herbal medicines were co-evolved with man within their societies since the inception of mankind on this planet. Large proportions of rural and urban population (about 80%) throughout of the world are dependent upon herbal medicine for symbolic and medicinal value 1.

Over the years many plants attracted the attention of ancient people as source of remedies to cure various ailments and they acquired knowledge on such plant species. This knowledge was passed on from one generation to another by the word of mouth.

Due to the rapid industrialisation and changing lifestyle the indigenous traditional knowledge of the ethnomedicine is disappearing at an alarming rate. Nevertheless some tribal communities around the world and in India are still preserving this treasure of human wisdom of thousands of years.

In whole of the North India, Gujjar-Bkaerwal community is the only major tribe still supporting a nomadic lifestyle and practising ethnomedicine for their survival.

The Gujjar-Bakerwal tribe as community and the study area (district Rajouri) as an eco region are under great pressure from the fast changing ecological and socio-economic dynamics. This community is vulnerable to climate changes and changing socio-economic scenario. With an ever increasing human and live stock population and aiming high on the unplanned developmental approaches this region (district Rjouri)  has become the most fragile zone in the whole of north western Himalayan biodiversity hotspot.

Some important recent studies 4, 5,  6, 7 & 8  discussed  the plant resource utilisation in cure of respiratory disease by the various indigenous communities. These workers stressed upon the need to document the traditional knowledge of plants resource, to study the status and sustainable resource utilisation strategies. Some notable contributions on the ethnoboatany of Jammu and Kashmir have been made in the past 9, 10, 11, 12, 13, 14, 15, 16, 17, 18, 19, 20, 21, 22 & 23 but somehow no worker in the past tried to document the plant resource utilisation for curing chest disorders by the Gujjar-Bakerwal tribe of Jammu and Kashmir state.

As there is no earlier work done on this aspect, the present study was carried to cover the existing knowledge gaps and to generate a data base of ethnobotanical knowledge of the specific plants used and preparations.

MATERIALS AND METHODS: Rajouri is one of the hilly districts of Jammu and Kashmir State bounded by district Poonch in North, district Jammu in South, district Udhampur in East and PoK (Mirpur) in the West. The district lies between 300 – 50/ N to 33o – 30/ N longitude and 74o E to 74o – 10/ E latitude, covering an area of 2630 km2  with an altitudinal variation of  490  meters  in Sunderbani  to 4700 meters in Pir Panjal ranges. District Rajouri has six tehsils and nine blocks with four small towns, having an urban area of 18 km2   (Figure 1). 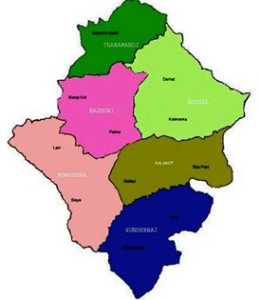 Periodic field trips for ethnobotanical exploration were undertaken during September, 2009 to April, 2011 in the study area inhabited by Gujjars-Bakerwals tribe. During the surveys personal interviews were conducted with knowledgeable persons of Gujjars–Bakerwal to know about the plants and practices used to cure chest diseases. To verify and confirm claims, the interview questionnaires were repeated within and among interviewees. Each of the plant material was assigned a field book number and documented as to scientific name, local name, family, part used, method of use, folk claims and mode of administration.

The local names of different chest diseases, where available were converted into scientific names by taking the help of doctors at District Hospital Rajouri. Plants that were identified as having use for curing gastrointestinal disorders were collected, compressed, dried, the Herbarium Specimen were made and submitted to the Jammu University Herbarium. Plant specimens were identified using 24, 25 & 26 as standard references. Wherever necessary, comparisons were made with Herbarium Specimens available at Jammu University Herbarium.

RESULT AND DISCUSSION: The present study revealed 32 plant species representing 24 families commonly used in the treatment of a variety of chest diseases. The scientific name of the reported plant species along with their family, local name, part used and  a brief  preparation and disorder treated is given in the list below;

Medicinal plants and formulations used by the Gujjar-Bakerwal tribe in the cure of Chest Diseases:

Use: Fresh rhizome is inhaled in common cold as anti-allergic

Use: Root powder is given to the chronic cough and asthmatic patients.

Use: Extract of the leaves is used against whooping cough.

Use: Decoction of root is taken early in the morning for curing cough.

Use: Leaves are smoked in cold and in chest pain.

Use: Leaves and roots infusion is used in cough.

Use: Root is used against pulmonary infections.

Use: Infusion of whole plant is taken for cough relive.

Use: Root is used to cure asthma.

Use: Powdered flowers along with honey are given in cough and asthmatic problems.

Use: Wood is useful against pulmonary disorder.

Use: Powdered seed are given to asthmatic and bronchitis patients. Fruit roasted in wood fire or hot ash eaten for cough cure. Dried fruits with honey taken in cold and cough.

Use: Fruit is considered useful in the diseases of lungs.

Use: Extract of the plant is given in bronchitis.

Use: Roots and leaves are used in cough, asthma and chronic bronchitis and chest pain.

Use: Plant extract is helpful in dry throat and asthma. Boiled leaves are given to cure old cough.

Use: Leaves are considered useful in whooping cough.

Use: Resin of the plant is useful in chronic bronchitis.

Use: Turpentine is used internally in the treatment of respiratory troubles as cough and could.

Use: Galls useful in asthma, cough and other diseases of the respiratory tract.

Use: Boiled herb drink with milk is taken in cold and cough conditions.

Use: Herb is used in asthma. Especially boiled herb is taken with fresh butter.

Use: Roots used in cough, asthma, bronchitis and whooping cough.

Use: Volatile oil extracted from the plant is having bronchodilator properties.

Use: Leaves used in asthma, bronchitis and cough.

Use: Root powder mixed in honey is given in the night at bed time for relive from chronic cough and lungs pain.

Use: Seed coat is used against flu and cold.

Use: Root  powder mixed with honey is used against asthma.

Use: Leaves are smoked against asthma and other pulmonary problems.

Use: Flowers are used for the treatment of cough and sore throat.

The Asteraceae, Acanthaceae, Pinaceae were the most represented family (3 species) followed by the Anacrdiaceae, Euphorbiaceae and Fabaceae with two species each. All the remaining 15 families were represented by one species each. A variety of plant parts were used in the treatment of gastrointestinal disorders by the locals.

The plant part most frequently used to treat respiratory diseases in the study was reported as Root (10) followed by leaf (7), flower(3), fruit (2), bark (2) and seed (2). Also many other plant parts including rhizomes, galls, buds, resins and latex were found in use in various formulations for chest diseases cure.  Decoctions, infusions and smoking are the most frequent methods of preparation. Cough, asthma, pneumonia, pumnory infetion, bronchitis and chest pains were recorded as the most commonly encountered chest diseases.

Mankind has been continuously using the plants in one or the other way for the treatment of various ailments, however, with rapid growth and spread of allopathic, these traditional methods of treatments are becoming obsolete. In a country like India a wider section of people live in rural areas where adequate medical facilities are not enough or there are some places in far remote areas which remain cut off for most of the year, hence inhabitants of these areas are solely dependent on plant material growing in their surroundings.

Such traditional practices remain within the heart of some people like Gujjar-Bakarwals, shepherds, chopans and some elderly people. Most of the  study area is cut off, mountainous, and inaccessible with very meagre infrastructural facilities available. Due to the disadvantages caused by geographical conditions, the people of these border districts are economically backward with 46 per cent of the population living below the poverty line. The people of Rajouri-Poonch districts are mainly dependent on agriculture and livestock rearing. The terrain is hilly with little arable land. Consequently, there is a great dependency on the forest resource of the region. The result of study revealed that knowledge about the ethnomedicinal plants, habitat distribution and harvesting time of plant species is still maintained among the people of Gujjar tribe in the study area.

The preservation of knowledge appears to be the result of continued reliance of this tribe on the plants as a source of medicine.  However the decline in use of plants may gradually lead to the fading away of indigenous knowledge associated with these plants.  The results also revealed that reported plant species and general biodiversity of the study area is under growing pressures from various anthropogenic factors.  Thus, public awareness and community based management need to be encouraged at all levels.

Therefore an attempt has been made to catalogue the ethnomedicinal knowledge of plant species used by the Gujjar tribe of District Rajouri in the cure of various chest diseases. Also, this paper contributes to the database of traditional indigenous knowledge of plants of the country, which have not been documented earlier from the study area. The findings suggest further investigation into chemical profiles, processing methods, cultivation techniques, conservational studies and pharmacological properties of the reported plant species.

ACKNOWLEDGEMENT: I express my gratitude to my teachers Prof. V.K. Anand and Prof. H. S. Kirn for their patronage and guidance. To  Prof. R.N.Goehl, Prof. A.K. Wakhlu and former Prof. Anima Langer Heads of the Department,  Prof. Geeta Sumbali Head, Department of Botany, University of Jammu for extending necessary laboratory and library facilities during my stay in the department. I also thank Prof. Rani Mangotra, Prof. Yashpal Sharma, Dr. Namrata Sharma, Dr. Veenu Kaul my teachers. I express my thanks and gratitude to Dr. Mahroof Khan, Mr. Mohd Arief,  Beauv, Chie, Thair, Latief and Yougraj at EFI. A special word of remembrance and gratitude to the people of study area particularly to the Gujjar and Bakerwal tribe for providing me support in the field and sharing important ethnobotanical knowledge.