ABSTRACTThis paper describes the utilization of pteridophytes for the treatment of various gynecological and other related problems by the indigenous women of Pachmarhi Biosphere Reserve in Madhya Pradesh. The present study reveals that 23 species of pteridophytes belonging to 15 families and 18 genera are traditionally used by tribal women of Korku, Gond, Bharia, Bhil, Mauria, Maria, Paria, Bhatara and Baigas communities in gynecological problems which contribute about 18.66% of total pteridophytic diversity (134 species) of the area

INTRODUCTION: Human beings have been utilizing plants for food, fiber and drugs apart from their well-being since time immemorial. In the modern technocratic world, the traditional system of medicine plays an important role in health care of urban, rural and tribal people for all types of ailments. As herbal use becomes more common throughout the world, ethnobotanical investigations can provide insight into other medical systems that differ from the biomedical model 1.

About 85% of traditional medicines used for primary healthcare globally derived from plants 2. In India, where current population is about 1,220, 200,000 according to last census 2011, an estimated 65% of Indian population still depend on the traditional medicine, because modern medicine is simply too expensive and treatment is too capital intensive. Another important reason may be the rare presence of allopathic doctors in tribal areas of the high mountains, the desert areas, or in the remote forests 3.

Today traditional medicine and ethnobotanical information play an important role in scientific research. Ethnobotanical studies have become increasingly valuable in the development of health care and conservation programs in different parts of the world 4.

Scientific research in traditional and indigenous medicine in India has continuously been increasing. Large number of medicinal plants and their therapeutic uses has been thoroughly investigated 5. Unfortunately the lower plants are thought by most people to be quite non-productive members of the plant kingdom. Pteridophytes, being a group of lower vascular plants, it remains unattended and their useful aspects are largely ignored.

In comparison to angiospermous plants they have found little applications in medicine. However, the tribal communities, ethnic groups and folklore throughout the world are utilizing rhizome, stem, fronds, pinnae and spores of fern and fern-allies in different ways for the treatment of various ailments since ancient times. They have also been used for food, fiber, crafts, building materials, abrasives, decoration, and apart from their use as medicine 6-15. Recently interest in ethno botanical studies of fern and their allies have attracted a number of researchers and they have supplied a lot of information about different uses worldwide 16-26.

Out of 1,200 species of pteridophytes occurring in India, about 170 species have been found to be used as food, flavor, dye, medicine, bio-fertilizers, oil, fiber and bio-gas production 27. Ethnobotany and medicinal properties of Indian fern and their allies have been described by various workers time to time 28-32. Likewise 160 species of useful pteridophytes in India on the basis of phytochemical, pharmacological and ethnobotanical studies have been reported 33. An overview on medicinal uses of 110 Indian pteridophytic has been published 34. Likewise the antimicrobial and antibacterial potential of some ferns has been studied 35-38. The medicinal value of pteridophytes against bacteria, fungi, virus, cancer rheumatism, diabetes, inflammation, consultant, fertility, diuretic, pesticides, hepato-protective, and sedative had been reported. Besides sugar, starch, proteins and amino acids, ferns contain a variety of alkaloids, glycosides, flavonoids, terpenoids, sterols, phenols sesquitorpens etc. as potential components used in various industries 39.

Ethnobotanical studies and surveys of Central India have been mainly confined on flowering/higher plants and very few efforts have been made so far to explore medicinal properties of pteridophytes 40. The numbers of contributions about the taxonomy, ecology and distribution of pteridophytes have been published time to time in various ways but enough attention has not been paid towards their useful aspects. During past years extensive survey in connection with systematics and ethnobotany of pteridophytic biodiversity, in different parts of Pachmarhi Biosphere Reserve and adjoin area has been explored by various researchers 41-42.

A total 134 ferns and fern allies have been reported from Central India, out of which 119 species are from Pachmarhi Biosphere Reserve, Madhya Pradesh 43-47. Ethnobotany and economic uses of some ferns and their allies of Satpura Hills has been described 48-50. Recently 59 species of ethnomedicinal useful pteridophytes have been reported from Central India including Pachmarhi Biosphere Reserve 51-53. After that 31 ethnobotanical uses species of ferns of Pachmarhi hills have been compiled 54.

The average annual rainfall is about 200–250 cm. It is one of the highly biodiversity rich areas with high floristic diversity and unique plant life forms because of the varied spectrum variations of the latitude, altitude, rainfall, topography, soil type and other climatic aspects. Total area links two biological hot spots of the country which are Eastern Himalayas and Western Ghats and also act as confluence of northern and southern type of vegetation 55-56.  It is a natural junction of two most important timber species of India, Teak and Sal.

Pachmarhi forests can be broadly classified into three major types which are (1) moist deciduous, (2) dry deciduous and (3) central Indian sub-tropical hill forest 57. Pteridophytes are most prevalent in sub-tropical hills forest of Pachmarhi. Perennial streams and dark shady gorges encourage the growth of moisture loving species of pteridophytes, along with rare herbs in the area. The area is generally perceived as a tribal dominated area. Many ethnic groups and folklore like Gond, Korku, Bharia, Bhil and Mabasi inhabit in and around the Reserve. They are largely dependent upon the use of traditional medicines to cure diseases and various ailments from which they suffer 58. In turn they protect the forests, conserve its diversity, and also enrich fertility with various cultural activities.

Traditionally, the rural and tribal women of this area mostly prefer plant medicines rather than modern medicines for their gynecological problems. Most of the gynecological problems can be attributed to unhygienic living conditions, malnutrition and hard physical work, often during pregnancy. Traditional healers and ethnic women have been using many of the locally available plant species including pteridophytes to cure gynecological disorders like abortifacients, excessive-bleeding (hypermenorrhea), painful menstruation (dysmenorrhoea), irregular menstruation, amenorrhea, leucorrhoea, prolapsed uterus, for abortion and to reduce sterility in women.

Keeping the aforesaid facts in view, the present study was undertaken with the aim of enlisting the pteridophytic species and their uses in gynecologically problem used by the tribal communities in Pachmarhi Biosphere Reserve. The study also motivates the farmers for the sustainable use, cultivation of selected species which are subjected to over harvesting and preservation of traditional knowledge and conservation of these pteridophytes.

MATERIALS AND METHOD: The data presented are based on the first hand information collected during the period in months of October and November 2011. The present study is the outcome of the critical field survey, sample collection and literature survey. The data were collected according to the methodology suggested by Jain 58-60. The ethnobotanical data (local name, mode of preparation of medicines and their uses in gynecological problems) were collected through questionnaire, interviews and discussions among village chiefs, traditional healers / Vadhya and local old women of Gond, Korku, Bharia, Bhil and Mabasi ethnic groups (Fig. 1vii & viii).

RESULTS AND DISCUSSION: A total of 23 plant species belonging to the 18 genera in 15 families used in treating 16 different gynecological/reproductive health related diseases by the tribal women of Gond, Korku, Bharia, Bhil and Mabasi communities of Pachmarhi Biosphere Reserve which contribute to about 18.66% of total pteridophytic diversity (134 species) of the area. The medicines obtained from these ferns are used during pregnancy (antenatal), at delivery, and after delivery (post-partum) and are presented in Tables 1 & 2 and graph (Fig. 3i).

They show a summary of the plant species, their local names, family, gynecological diseases, morphological characters and mode of administration. Oral consumption is the most frequently employed route of administration while inhalation appeared to be the least preferred route of administration. All plant parts such as rhizomes, tubers, fronds, leaves, stem and spores are used as medicine (Fig. 1ix). Leaves were the most popular plant part utilized in herbal preparations (37%), rhizome (26%), whole plant (23%) while fronds (including spores) were used infrequently (14%) (Fig. 3iii). Out of 23 species of ferns utilized for the herbal preparation ca 52% are common, 26% are occasional and only 22% are rare to the area (Fig. 3v).On the basis of the occurrence of the plant habit 12 species are terrestrial, 9 are lithophytes, 2 are epiphytes on tree and only one is climber (Fig. 3iv).

The approach adopted in documenting ethno-gynecological use of pteridophytes is a vital issue with the potential to enhance research and development. This study adopted an approach focusing on fern and fern allies used for female reproductive disorders in Pachmarhi Biosphere Reserve. Since among 15 families of fern and fern allies in the area the most common family reported in this study is Pteridaceae (5 species) while Selaginellaceae (3 species) and families Davalliaceae and Aspleniaceae represented 2 species each (Fig. 3ii). 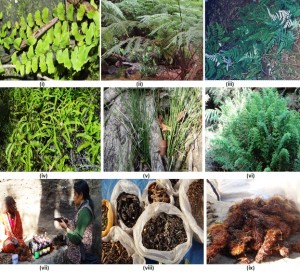 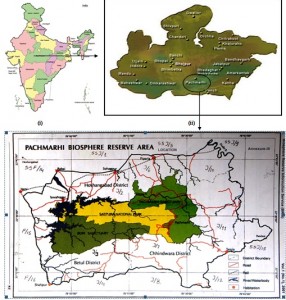 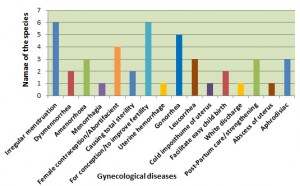 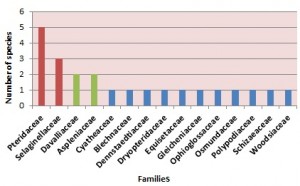 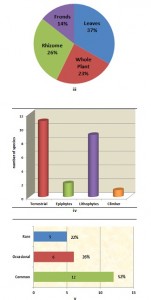 This approach allows for a clear identification of untouched areas in the documentation of ethno-medicinal uses of plants that require urgent attention and prevents duplication of efforts. Thus, the information collected from different groups of tribal people for the same problem would not only be documented in biological register but can be comparatively analyzed with ease providing further information as to similarity, differences or frequency with which a particular species is used for the same problem which is a good indication of efficacy 61. This study also infers the significant role of tribal women who are utilizing and conserving the pteridophytic biodiversity in the localities of their natural habitat.

They are found to be more familiar with the use of various medicinal plant including pteridophytes. It is apparent that the community is rich in ethnomedicinal knowledge and is being transmitted from generation to generation. It has been found that some individuals have become specialized in the preparation of the medicines from these pteridophytes owing to prolonged practical experience. This information handed down from generation to generation is rich in domestic recipes and communal practice. This data can be used in future for more studies and research on pharmacological and clinical level. Furthermore, research related to chemical screening may also be initiated to analyses the chemical contents of medicinal plants and the implications on health. In addition to medicinal use, plant resources can be linked to the preservation of biodiversity and alleviation of poverty by involving them in utilization and conservation of pteridophytic biodiversity and in overall support for forest conservation. Excessive collection, rapid urbanization and biotic interference has disturbing impact on all natural habitats; therefore an urgent need was felt to study and document this precious knowledge for posterity.

CONCLUSION: Man has exploited all groups of plants including pteridophytes for medicinal and traditional uses. However, an intensive study is required to search for the factors threatening the transmission of ethno-medicinal knowledge and the fast disappearance of rare pteridophytic species.

The first step to overcoming this challenge and improving on the drawbacks associated with ethnomedicinal studies is an intensive documentation of indigenous knowledge. The documentation of collected data should be more focused, specialized and subjected to a non-experimental validation, as an indication of efficacy can enhance the search for natural plant products 72. After documentation the next step should be an experimental validation of efficacy and establishment of effective dosage. The public awareness program should be start for cultivation of wild medicinal pteridophytes. This would encourage in the conservation and the production of improved varieties. Ethnobotanical knowledge if recognized, valued and implemented properly can conserve the biodiversity and help the environment and society in a holistic way.

ACKNOWLEDGEMENT: The authors are thankful to the forest officials, medicinal practitioners and the people of Pachmarhi Biosphere Reserve for their help and co-operation in during survey work. Grateful acknowledgment is made to the Head of the department, Dr. Pradyut Bhattacharya, USEM, GGSIP University, for providing the facilities for the study and to University Grant Commission, India for financial assistance. We wish to express our appreciation to Joint Director, Botanical Survey of India, Central Circle, Allahabad, for allowing consulting Herbarium and Library.