ABSTRACT: The present paper highlights the therapeutic uses of herbaceous medicinal plants used for various ailments by Toda tribe living in the pockets of Western Ghats of Tamil Nadu are inhabitants of Thiashola, Manjoor, Nilgiri District. A total of 32 plant species belonging to 18 families used by them as herbal medicines to treat several common diseases such as Asthma,  antidote,  contraceptive and night blindness, skin and stomach disorders, ulcer, common fever, rheumatism, bronchitis, cancer etc., Leaves are the most widely used plant part. During the present study it has been observed that the ethnobotanical systems and herbal medicines as therapeutic agents are of a paramount importance in addressing health problems of traditional communities. The indigenous knowledge available with these people plays an important role in quick and proper identification of natural resources.

INTRODUCTION: India is the largest producer of medicinal plants and is rightly called the "Botanical garden of the World". The medicinal plants, besides having natural therapeutic values against various diseases, also provide high quality of food and raw materials for livelihood1. Popular knowledge of plants which can be used by humans is based on thousands of years’ experience. It is essential to make the complete inventory of the medicinal component of the flora of any country for conservation and sustainable use. The conservation of threatened and endangered medicinal species in the wild is indispensable 2. Ethnobotanical Knowledge is very ancient in India. It deals with the direct, traditional and natural relationship between human societies and plants

Ethnobotanical studies assume great importance in enhancing our knowledge about the plants grow and used by native/tribal communities, the rich diversity assembled by them for their sustenance and the different means adopted by them for its preservation and conservation3. Ethno-medicinal documentation of tribal health system will be of great advantage to our pharmacologists and biotecnologists to develop potential medicine for treatment of several diseases and disorders.

India is a vast country with greatest emporia of plant wealth and is extremely rich in medicinal plants comprising about 8000 species 4 about 70% of India’s medicinal plants are found in the tropical areas mostly in various forest types spread across the Western and Eastern Ghats 5. Since ancient times in India, medicinal plants were used in Indian system of medicine namely Ayurveda and Sidha. Even today, tribes and certain local communities in India practice herbal medicine to cure a variety of diseases and disorders. There are few surveys that reveal the practice of herbal medicine by tribes and indigenous communities 6-10. It is apparent from this survey that tribes and various communities residing in remote places follow different practices 9. Ethnomedicinal knowledge still retained by these traditional communities need to be explored properly before erosion under the impact of modern consumeristic market economy 11.

In Tamil Nadu, several tribals inhabiting Western Ghats such as Todas seem endowed with a rich knowledge of herbals, especially ailments like rheumatism. The study focuses on the ethnomedicinal plants used by Todas settled in theforest area of the Thiashola, Manjoor, Western Ghats, Nilgiri District of Tamilnadu, India (Plate 1). In the present report, the information gathered from Todas on the herbaceous medicinal plants used for treating various diseases in Thiashola is provided (Plate 2). 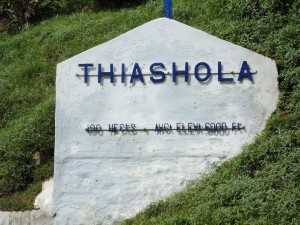 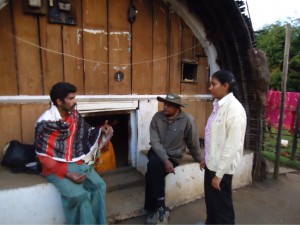 PLATE 2: INVESTIGATOR GATHERING INFORMATION ON ETHNOMEDICINAL PLANTS FROM THE TODA TRIBE AT THIASHOLA.

The mountains along the west coast of peninsular India, the Western Ghats, constitute one of the unique biological regions and it extends from the southern tip of the peninsula (8° N) northwards and about 1600 km to the mouth of river Tapti (21° N). Among the various bio-geographic zones of India, Western Ghats contain high degree of endemism and is very rich in its medicinal wealth. The forests and hills of this region is a treasure house, nearly of about 2000 species of higher plants, 92 species of amphibians, 89 species of reptiles, 15 species of birds and 12 species of mammals are endemic to Western Ghats 12-14. The Nilgiri Biosphere Reserve or Blue Mountains is an International Biosphere Reserve occupies a total area of 2542.49 Sq Kms, located in the Western Ghats of Palghat Gap.

The sholas are the residual forests confined to the sheltered sites such as the valleys, glens, hollows and depressions where moisture is good in all the basins of the Nilgiris 15. The Thiashola, one of the undisturbed subtropical montane wet evergreen forest located in The Nilgiris at Manjoor, Southern Western Ghats, harbours a high number of medicinal and other economically important plants in its understorey despite the existence of adequate soil moisture at all times of the year 16.

However, the documentation of medicinal value and ecological features of such important plants of this region have not been completely executed. Hence the present study was aimed to explore the availability of herbaceous medicinal plants and their ecological status used by Toda tribes in Thiashola understorey of The Nilgiris (Map-1). Nilgiris was called as Todamala (the Toda Mountains). 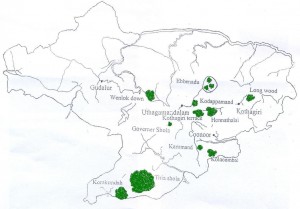 With the assistance of experienced and elderly tribes traditional knowledge the field survey was carried out in Thiashola, Manjoor, Nilgiris South Division, Western Ghats during 2009 and 2010. The ethnobotanical data were collected through interviews and discussions among the herbal practitioners in and around the study area. Field trips were undertaken to tribal areas and information was obtained through informal interviews with elderly tribal. The data were recorded through a modified schedule based on 17-20.

Plants were collected in their flowering and fruiting seasons from the natural habitat. While collecting the individual plant species, a thorough observation was made regarding the location, natural habitat, distribution pattern, habit, nature of roots, tubers, bulbs or rhizomes, floral and fruit characteristics etc. Seasonal variations, flowering and fruiting stages were also recorded and were entered on the spot in the field note book.

The collected specimens were pressed properly. Dried specimens were poisoned with 0.1% HgCl2 following the method of 21. All the informations were transferred from the field note book to the right hand corner of the herbarium sheet for ready identification. The voucher specimens were deposited in Department of Botany, Vellalar College for Woman, Thindal, and Erode. Photographs were also taken to supplement the herbarium.

The collected plants were identified with the help of the existing Floras 22-24 and compared with type specimens available in the herbarium of Botanical Survey of India, Southern Circle, TNAU Campus, Coimbatore, Tamil Nadu. The ethnobotanical data collected through interview were documented alphabetically with their binomial, vernacular names, ecological status, parts used and medicinal uses.

The Todas, a tribal community lives in the pockets of Western Ghats of Tamil Nadu are inhabitants of Thiashola. The shola receives an average annual rainfall of ca. 1199 mm. The monthly average minimum temperature varied from 15.2ºC to 26.9ºC. 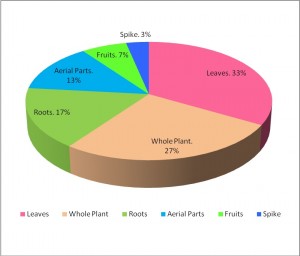 Out of the large variety of species available in the Western Ghats, about 30 species hold a very high value for the treatment of different forms of ailments. The plant Cayratia pedata var. glabra is found to be a curing agent for many major ailments such as jaundice, ulcer, fever and antiseptic. Cayratia pedata andOphiorrhiza mungos L. are specially recommended for various forms of tumor 16. Achyranthes bidentata Blume. and Girardinia diversifolia (Link.) Friis. are uprooted for their medicinal roots, tubers, spike and spadix to sell in local markets. Similarly, the species like Anaphalis elliptica DC. and Centella asiatica Urban. are exploited illegally by the local people.Cultivation is suggested for the species, Achyranthes bidentata Blume. and Centella asiatica in degraded sholas and other suitable habitats in Nilgiris to meet the demand and also to conserve these species 25.

Different measures have been adopted for conservation of these species. So that it may give maximum benefit to the present generation while maintaining its potential to meet the needs and appiratins of the future generation. 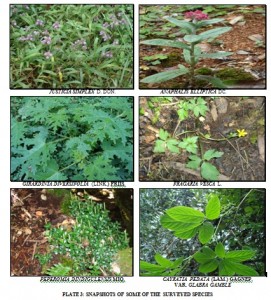 PLATE 3: SNAPSHOTS OF SOME OF THE SURVEYED SPECIES

CONCLUSIONS: The Todas even now use these plants in different forms based on their traditional knowledge, which had been developed by their forefathers through trial and error methods and passed on to them orally from one generation to another. Unfortunately, due to lack of written documents, most of the traditional knowledge on medicinal plants and their uses survived only by words of mouth from generation are being slowly lost. Moreover, the herbal healers had the strong tendency to keep their knowledge secret without any documentation. Hence, all such traditional and cultural knowledge need to be appreciated and should be integrated with modern scientific techniques.