ABSTRACT:The ethnomedicinal practices appear to be a part of traditional system of treatment for domestic cattle in remote areas of Nepal. The knowledge of local healers with the utilization of biological resources in various ailments is still survived and is communicated verbally to limited family members. As a result, this knowledge is at threatened stage. Now days, documentation of traditional knowledge is receiving much attention. The study carried out in seven village development committees of Morang district concerns with the traditional uses of crude drugs obtained form 37 plant species belonging to 24 families which are used for the treatment of 21 common ailments of domestic cattle. Participatory Rural Appraisal (PRA) method was applied to collect the data. The information on the correct botanical sources, family, local name, plant part used, method of preparation and method of application of different crude drugs were investigated in this study.

INTRODUCTION: Since ancient times, people have used plants to heal their as well as animals’ ailments. Indigenous knowledge of local healers associating with the use of the plants plays a key role in primary health care. This indigenous knowledge have been transmitted from generation to generation in the form of inherited culture and such practices have been handed down verbally and only few of information were documented in books and in many other religious scripts 1. The knowledge of the people may be at the edge of extinction due to lack of proper record and investigations.

Therefore, now-a-days, the documentation of indigenous knowledge is receiving much attention. The Medicinal and Aromatic Plants Database of Nepal (MAPDON) encompasses over 1624 species of medicinal plants including 1515 species of angiosperms, 18 species of gymnosperm, 58 species of pteridophytes, 6 species of lichens and 9 species of fungi 2. Earlier investigations were carried out on different ethnobotanical aspects of various parts of country. An inventory was established on general ethnobotanical practices and ethnomedicines to treat various human disorders 1, 3, 4, 5, 6, 7, 8.

Livestock population has been an important resource for various products. Therefore, the cattle health care has been a genuine concern to various role of traditional knowledge in relation to veterinary medicine system. However, very little effort has been made to explore the ethnoveterinary uses of various medicinal plants in different parts of country. The literature shows that a very few documentation of the herbal veterinary practices in Nepal 10, 11.

Similarly, an effort was made to gather the existing knowledge regarding the use of different parts of the plants to treat various common ailments of domestic cattle by different treatment tribes of Morang. In this context, the plants with their medicinal values for the domestic cattle used by the tribal people of Morang district were investigated along with the local name, botanical sources, families, plants parts used, method of preparation, method of application, dosage and used of additives.

Morang district is located in the eastern part of Nepal and comprise sixty village development committees with one sub-metropolitan city. The district is surrounded in the east by Jhapa, in the west by Sunsari, in the north by Dhankuta and Ilam and in the south by Bihar state of India. It occupies total area of 1855 Sq. Km. with average length of 46 km (East–west) and 54 km breadth (North-South). The altitude varies some 60m above the sea level to 2410m. The total population of the district is around 8, 43220 (3.64%of the total population of Nepal) and annual growth rate is 2.23%.

The present research was conducted in the in the seven village development committees (VDCs) of western part of Morang district. These VDCs are Katahari, Baijnathpur, Buddhanagar, Majhare, Takuwa, Rangeli and Aamgachhi. The major groups of cast in these VDCs are Yadav, Kebat, Rajbanshi, Bata, Muslim, Mushar, Dhanuk, Teli, Gangai, Satar, Nuniya, Jhangar, Tatma, Bramhin and Chhetri. The native language of the major population is Maithali, Rajbanshi, Bhojpuri, Nepali etc. Large majority of the people living in these areas are farmers and are engaged both in the agriculture and animal husbandry. They have been using plants found around in the treatment of domestic cattle since time immemorial.

METHODS AND MATERIALS: Participatory techniques were used for the collection of information. The areas were visited regularly between July, 2008 – May, 2009 A.D. The fields were visited in different seasons to avail the plant resources in their flowering conditions. The field work comprised two approaches, survey technique and inventory technique.  In each field visit, the study was conducted with the close assistance and cooperation of local healers. A semi-structured questionnaire was prepared in local language and interviews were taken from them. The information for particular ailments was cross checked through the repeated queries during the interviews to get accurate and valid information. They were requested to accompany in the collection of plants and crude drugs in the field. The collected specimens were dried and subjected to prepare herbarium specimens as well as crude drugs. The samples were identified with the help of standard literature 12, 13, 14, 15 and deposited in Pharmacognosy laboratory of All Nepal Institute of Medical Sciences, Chabhil, Kathamandu. An inventory of the crude drugs, their local names of plants, their parts used, biological source, method of preparation and application against various ailments were prepared.

The validity level (VL), the percentage of informants claiming the use of certain plant for the same major purpose, was calculated for the most frequently reported diseases or ailments as;

The plants were divided into following three groups according to the validity percentage;

RESULTS: Altogether 37 plant species (both wild and cultivated) as the botanical sources of crude drugs belonging to 35 genera and 24 families used for the twenty one common ailments of domestic cattle are reported in this study.

Out of these plant species, 4 belong to Liliaceae, 3 from  Verbenaceae, Zingiberaceae and Araceae family and 1each to Piperaceae, Cannabinaceae,  Gramineae, Anacardiaceae, Euphorbiaceae, Moringaceae, Musaceae, Papaveraceae, Oxalidaceae,  Labiatae, Cucurbitaceae, Cruciferae, Menispermaceae and Apocyanaceae family.

These common ailments of domestic cattle have been arranged along with the plants used against them, their botanical sources, local name, parts used, method of preparation and method of application in Table 1. They look for the crude drugs and prepare the medicine when animals are ill.

TABLE 1: CRUDE DRUGS USED BY THE TRADITIONAL HEALERS IN THE TREATMENT OF DOMESTIC CATTLE IN MORANG DISTRICT 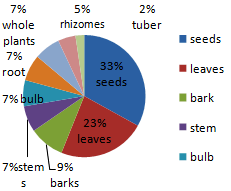 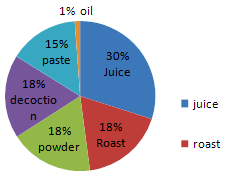 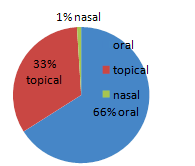 They use plants and their parts such as roots, rhizomes, tubers, leaves, stem, bark, bulb, whole plant fruits and seeds. The most frequently used parts were fruits and seeds 33%, followed by leaves (23%), bark (9.3%), stem (6.9%), bulb (6.9%), root (6.9%), whole plants (6.9%), rhizomes (4.65%) and tuber (2.3%). Though 21 different  types of illness were recorded as animal health problems in seven village development committees of Morang district, the most common major diseases according to respondents included skin disease, diarrhoea, fever,  blood dysentery, flatulence and  chronic cough.

The healers’ had knowledge to diagnose the various ailments on the basis of sign and symptoms.   Crude drugs used by the traditional healers were fresh or dried, mostly in the form of paste, juice, decoction, roast, oil and powder.

DISCUSSION: The traditional knowledge of the local healers of Morang district has tremendous ethnobotanical importance. They use plants and their parts such as roots, rhizomes, tubers, leaves, stem, flowers, seeds, and fruits for the treatment various ailments of cattle.

A very little effort has been made to explore the ethnoveterinary practices carried out in various part of Nepal apart from mentioning the certain ethnomedicinal uses for the domestic cattle 9, 16. A large number of crude drugs reported to have medicinal value in the present study are also supported by the findings of other researchers but some of the findings have not been reported yet. The finding is similar to the use of seeds of Abrus precatoriusin cattle for expulsion of placenta by the folk people of Rajasthan 17.

Centella asiatica  for diarrhea, Trachyspermum ammi and Leucas aspera for flatulence, Semecarpus anacardium and Allium sativum for tail cut, Solanum tuberosum for burn, Melia azadirach for intestinal worm, Argemone maxicana and Oxalis corniculata for eye complaint and Alocasia indica as aphrodisiac have been reported in this study but not mentioned in the findings of others 9.

This study reported the ethnoveterinary importances of   Achyranthus aspera, Acorus calamus, Alstonia scholaris, Bombax ceiba, Datura metal and Zingiber officinalis and these plants are also recorded by others with different therapeutic values 10. Some study have mentioned Abelmoschus esculanta, Aesculus indica, Albizia chinensis, Anagalis arvensis, Buplurum candolli, Capsicum frutescen, Cassia toora, Cleome gynandra Delphinium scabriflorum,  Euphorbia hirta, Ficus benghalensis, Ficus neriifolia Jatropha  gossypifolia, Lyonia ovlifolia, Sida corpifolia, Lyonia ovlifolia, Sida cordata, Taxus baccata and Xanthium strumarium which are used in veterinary medicine 10. But, such informations are not recorded from this study.  Most of these plant species are not found in the local area so the local healers don’t use them.  Some of the findings are supported by the similar works done in various parts of India 18, 19.

The plant parts are generally used by the local healers to cure some important diseases viz., diarrhea, blood dysentery, flatulence, joint swelling, fever, blood in urine, tail cut and constipation. Generally, the local healers can identify these diseases of animals by their behavior, stool, urine, hotness of ear, color of eyes and sound of the animals.

CONCLUSION: Morang district occupies an important place with different types of medicinal plants. Although 37 plant species of medicinal values are reported in the present study, many more still remain to be explored. In Nepal, the use of the medicinal plants in the treatment of human and domestic cattle has been practiced since time immemorial. The medicinal plants are more popular among the rural areas of the country due to popular belief owing to their effectiveness, easy access, low cost and very less side effects. The traditional medical practices may be an appropriate way for the treatment of the domestic cattle in the rural areas since the availability veterinary health services is not sufficient. The knowledge of traditional healers is very secret usually kept within themselves and it is often not easy to share with others.

As such, this study represents a contribution to our present knowledge on the crude drugs used against various ailments of the domestic cattle and deserves further phytochemical and pharmacological screening in the context of important claims reported.  Such investigations may bring to light the new natural active principles with their potential applications.Due to a trend to keep it a secret, the knowledge of traditional healers is on the verge extinction. Therefore, an attempt should be made to record the knowledge of traditional healers to use the medicinal plants for different ailments of domestic cattle and they should be duly recognized as the pioneer of ethnomedicine. The traditional medical practices would be an income generating source for the traditional healers if they were supported by the scientific training. The potential claim should be screened for the antimicrobial, phytochemical and pharmacological properties.

ACKNOWLEDGEMENT: We are grateful to Mr. Y. P. Adhikari, Managing Director of All Nepal Institute of Medical Sciences, Chabhil, Kathmandu, for the laboratory facilities and persistent encouragement. We are very thankful to Mr. Rajesh Yadav and Mr. Naresh Yadav (Buddhanagar, Morang) for their full cooperation during the field study and for the introduction of potential traditional healers. We are also thankful to all the traditional healers of all the VDCs whose affection made this project successful. We wish to acknowledge entire staff of National Herbarium, Godavari, Lalitpur for their cooperation in plant identification.