ETHOSOMES AS ELASTIC VESICLES IN TRANSDERMAL DRUG DELIVERY: AN OVERVIEW

ETHOSOMES AS ELASTIC VESICLES IN TRANSDERMAL DRUG DELIVERY: AN OVERVIEW

ABSTRACT:Ethosomes are as novel vesicles in transdermal drug delivery show significant effects of drug penetration through the biological membrane with slight modification of well established drug carrier liposomes. Ethosomes are soft, malleable vesicles composed mainly of phospholipids, ethanol and water. The size of ethosome vesicles can be modulated from tens of nanometer to microns. The ethosomes can be prepared by Hot as well as Cold method. The evaluation parameters of ethosomes include visualization, vesicle size and zeta potential, transition temperature, surface tension activity measurement, vesicle stability, drug content, penetration and permeation studies. Ethosomes have been found to be much more efficient at delivering drug to the skin than either liposomes or hydroalcoholic solution. Thus, it can be a logical conclusion that ethosomal formulation possesses promising future in effective dermal/transdermal delivery of bioactive agents.

INTRODUCTION: Transdermal administration of drugs is generally limited by the barrier function of the skin. Vesicular systems are one of the most controversial methods for transdermal delivery of active substances 1. The interest in designing transdermal delivery systems was relaunched after the discovery of elastic vesicles: Ethosomes. Ethosomes are novel carrier system used for delivery of drugs having low penetration through the biological membrane mainly skin. Ethosomes are the slight modification of well established drug carrier liposomes 2.

Ethosomes: Ethosomes are lipid vesicles containing phospholipids, alcohol (ethanol and isopropyl alcohol) in relatively high concentration and water3.Ethosomes are soft vesicles made of phospholipids and ethanol (in higher quantity) and water. The size range of ethosomes may vary from tens of nanometers to microns (μ) 4. Ethosomes permeate through the skin layers more rapidly and possess significantly higher transdermal flux in comparison to conventional liposomes 4, 5. Visualization of ethosomes is shown in Figure 1. Although, the exact mechanism for better permeation into deeper skin layers from ethosomes is still not clear. The synergistic effects of combination of phospholipids and high concentration of ethanol in vesicular formulations have been suggested to be responsible for deeper distribution and penetration in the skin lipid bi-layers.

Such a composition enables delivery of high concentration of active ingredients through skin. Drug delivery can be modulated by altering alcohol: water or alcohol-polyol: water ratio. Some preferred phospholipids are soya phospholipids such as Phospholipon 90 (PL-90). It is usually employed in a range of 0.5-10% w/w. Cholesterol at concentrations ranging between 0.1-1 percent can also be added to the preparation1. Examples of alcohols, which can be used, include ethanol and isopropyl alcohol. Among glycols, propylene glycol and Transcutol are generally used.

In addition, non-ionic surfactants (PEG-alkyl ethers) can be combined with the phospholipids in these preparations. Cationic lipids like cocoamide, POE alkyl amines, dodecylamine, cetrimide etc. can be added too. The concentration of alcohol in the final product may range from 20 to 50%. The concentration of the non-aqueous phase (alcohol and glycol combination) may range between 22 to 70% 8, 9. Different additives used in the ethosomal formulation are presented in the table 1.

Advantages of Ethosomal Drug Delivery 3, 10, 11: In comparison to other transdermal & dermal delivery system;

FIGURE 2: DIAGRAMMATICALLY REPRESENTATION OF MECHANISM OF ACTION OF ETHOSOMES

Method of Preparation 4, 8, 15: There are two methods which can be used for the formulation and preparation of ethosomes. Both of the methods are very simple and convenient and do not involve any sophisticated instrument or complicated process.

Ethosomes can be formulated by following two methods: The formulation of ethosomes involves hot and cold method (see table 2) 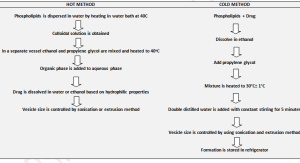 Evaluation: The methods of evaluation for ethosomes are discussed below:

Evaluation parameters and instrument/methods used in Ethosomes are shown in table 3.