ABSTRACT: Ethosomes are phospholipid-based elastic vesicles which have a potential as novel topical and transdermal drug delivery systems. They are ethanolic phospholipids vesicles which can act as carriers for various medicaments. Ethosomes have gained importance in the area of research, because of their intensified skin permeation, better delivery of drug and increased drug entrapment efficiency. These systems are more efficient in delivering substances to the skin because of the presence of ethanol, which provides a net negative charge on the surface, which helps to avoid aggregation of vesicles due to electrostatic repulsion than either conventional liposomes or hydroalcoholic solutions in terms of quantity and depth. Ethosomes are simple to prepare and safe to use. This review attempts to compile the various aspects like mechanism of action, methods of preparation (Hot method, Cold Method, Dispersion method using rotary evaporator) ,advantages, limitations, characterization, applications in different conditions like Anti-inflammatory, Arthritis, Acne, Fungal infections,  Bronchial asthma, chronic bronchitis, emphysema, Diabetic condition, Scleroderma, systemic lupus erythematosus and psoriasis, etc of reported ethosomal formulations for topical and transdermal use. Also, the patented literature has been tabulated

INTRODUCTION: The main disadvantage of transdermal drug delivery is the poor penetration of most compounds into the human skin. The main barrier of the skin is the uppermost layer; the stratum corneum (SC). Several approaches have been reported to improve the penetration through the skin. One of the approaches is the use of vesicular systems like Ethosomes and Liposomes.

Ethosomes are phospholipid-based elastic vesicles containing 20–45% ethanol and water 1. For the preparation of elastic vesicles; ethanol is a proven permeation enhancer that has been added in the vesicular systems. High flexibility imparted by ethanol of vesicular membranes permits the elastic vesicles to squeeze themselves through the pores. The proposed mechanism of penetration enhancement with the ethosomal system suggests the intercalation of ethanol into the polar head group environment resulting in increased membrane permeability. With respect to stability, Ethosomes have been reported to be more stable than liposomes because of the presence of ethanol, which provides a net negative charge on the surface 2, which helps to avoid aggregation of vesicles due to electrostatic repulsion. Topically applied ethosomes can increase the residence time of active ingredients in the stratum corneum, epidermis and reduce the systemic absorption of drugs. These properties allow Ethosomes to permeate easily into the deeper layers of the skin.

Advantages and Limitations of Ethosomes:

Advantages of ethosomes as a product include; ease of manufacture, high patient compliance, enhancement of solubility and smaller size as compared to conventional vesicles. Ethosomes enhances the permeation of the drug through skin, disperse better, exhibit improved therapeutic efficacy and good storage stability, improved bioavailability and provide protection from toxicity. Ethosomes have applications in Veterinary, Pharmaceutical, Cosmetic, Biotechnology and Nutraceutical markets 3. However, limitations include; Poor yield 2, 4, unsuccessful vesicle formation can coalesce ethosomes 2 and product loss during transfer form organic to water media 2, 5.

Mechanism of Action of Ethosomes: 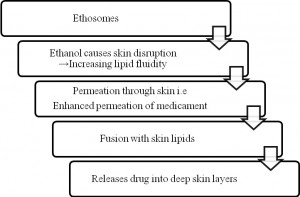 The following Table 4 summarizes formulation details of reported literature of Ethosomes for topical use.

TABLE 4: ETHOSOMES FOR TOPICAL USE

CONCLUSION: A review of the published data suggests that topically used ethosomes prove to be superior when compared with conventional formulations and offer improved safety and efficacy. Drugs entrapped in ethosomes remain in intact vesicles and exhibit penetration enhancing effect. Drug vesicular based delivery systems are hence promising in the treatment of a variety of skin disorders.

ACKNOWLEDGEMENT: I would like to express my sincere gratitude to P. Ravikumar for her constant help and support in writing this review. Also would like to thank S. Pathare for her assistance.