ABSTRACT: Bacopa monnieri, Tinospora cordifolia, and Evolvulus alsinoides are conventional Ayurvedic floras that are useful in the various neuropharmacological ailment. This research focused on the effect of ethanolic extract of Bacopa monnieri (BME), Tinospora cordifolia (TCE), and Evolvulus alsinoides (EAE) were evaluated alone and in a combination of extracts (CEPs) by using scopolamine-induced oxidative stress in rats. Tissue homogenates were prepared, an indicator of Superoxide Dismutase (SOD), Glutathione (GSH), Lipid peroxidation (LPO), Catalase (CAT) and Acetylcholinesterase (AChE) enzyme activities were estimated in the rat brain. Due to scopolamine treatment, enhanced LPO and AChE level but reduced SOD, CAT, and GSH levels in rats brain were observed. Rats treated with BME, TCE, EAE, and their CEPs [CEP-1 (EAE and BME), CEP-2 (TCE and BME), CEP-3 (TCE and EAE) and CEP-4 (BME, TCE, and EAE)] at 200 mg/kg, provided significant effect against scopolamine because these extracts decreases LPO, AChE level and restored SOD, GSH, and Catalase levels in rats brain. The CEPs produced significant effects in comparison to BME, TCE, and EAE. Thus, these results demonstrate that BME, TCE, and EAE in CEPs provide significant protective potential against Scopolamine induced oxidative stress.

INTRODUCTION: Deterioration of the cerebral neurons is a universal and essential cause of cognitive dysfunctions observed in older aged 1. Dementia is an intellectual disorder that leads to loss of brain capability and memory. The main reason for dementia is known to be a progressive neurodegenerative ailment, which is Alzheimer’s disease (AD) related to the neuronal loss in a cord and brain region 2, and it is the main regular appearance of the beginning of dementia in adult and awareness insufficiency diseases 3.

Losses of memory with lesser retention are general problems now a day. Strain and age are the most important circumstances that may escort to loss of memory and dementia 4. Scopolamine is a muscarinic receptor antagonist, has found to create the loss of memory in assured investigational animals, and is considered diverse as a useful experimental approach to study the mechanism responsible for cognitive impairment in Alzheimer's disease 5. Scopolamine also mediates the cholinergic discrepancy during oxidative strain 6. Since oxidative strain has also been studied to cause Alzheimer's disease, thus several antioxidants have been used to reduce oxidative strain in AD 7, 8.

Natural products may be a good alternative as neuropsychotropic drugs 9 to cure Alzheimer's disease 10, 11. Bacopa monnieri acts as a key ingredient and a memory enhancer of Ayurvedic medicines of India 12, 13. Complete flora of E. alsinoides used traditionally as medicine for immunomodulatory, nervous weakness and treatment of stress induced-neurodegenerative disease 14. A rejuvenating method recommends by the Ayurveda where Tinospora cordifolia acts as an essential constituent to improve memory function 15. B. monnieri, E. alsinoides, T. cordifolia and their combinations provided significant result against Scopolamine 16.

Animals Housing and Ethics Clearance: The study was performed on Wistar rats. All rats were kept in under controlled situations (temperature 22 ± 2 °C). All rats were given regularly a benchmark diet (Golden feed, New Delhi) and water. The research protocol was approved by the Institutional Animal Ethics Committee, Bhupal Nobles’ College of Pharmacy, Udaipur, Rajasthan (Reg. no. 870/ PO/Re/S/05/CPCSEA). Protocol Approval Ref. no. 14/BNCP/IAEC/2018.

Estimation of Biochemical Parameters: The ether anesthetized rats were sacrificed by cervical displacement after probe trial and the brain was dissected on the ice-cold surface. Tissue homogenates were prepared; an indicator of SOD, LPO, GSH, CAT, and AChE enzyme activities was estimated in the rat's brain.

Preparation of Tissue Homogenate: Tissue samples of rat's brains were weighed and in each sample, 10% w/v of pH 7.4 tris HCl (0.15 M) buffer was added. A mixture of each sample was homogenized under a chilled condition using a motor-driven Glass-Col® homogenizer, and tissue homogenate was collected.

Superoxide Dismutase (SOD) Assay: In clean test tubes tissue homogenate (0.1 ml) was taken, and to this Sodium pyrophosphate buffer 1.2 ml (pH 8.3, 0.052 M), 0.3 ml (300 µM) Nitroblutetrazolium, 0.1 ml (186 µM) Phenazine methosulphate and 0.2 ml (750 µM) NADH is added. Samples were mixed properly and incubate at 30 ºC for ninety seconds. After incubation, glacial acetic acid was mixed with 0.1 ml and stirred with n-butanol (4.0 ml). The sample was permitted to set for ten min, at 2000 rpm centrifuged the samples for ten min. Butanol film was taken out, and its color intensity was determined from a UV-visible spectrophotometer at 560 nm against butanol as blank. Control consists of a similar reaction mixture except for tissue homogenate sample, instead of which equal amount of buffer (Sodium pyrophosphate buffer pH 8.3) was taken 17.

Lipid Peroxidation (LPO) Assay: LPO of different extracts was projected by measuring the amounts of malondialdehyde (MDA). In the test tubes, the tissue homogenate was taken exactly 0.2 ml, and 1.5 ml tertiary-butyl alcohol, 0.2 ml of 8.1% sodium dodecyl sulfate, and 20% acetic acids (1.5 ml) were added. With the use of distilled water, the volume of the assortment was prepared to 4 ml and after that heated in a water bath (95 ºC) for sixty minutes using glass balls as a condenser. Further, in-room temperature, the samples were cooled and volume adjusted with the use of distilled water, make up to 5 ml. Butanol: pyridine (15:1, 5 ml) combination was mixed, and the contented was vortexed thoroughly for two minutes. At 3000 rpm each mixture was centrifuged for ten minutes. The separated out an upper organic layer. The organic layer reads absorbance at 532 nm operating UV-visible spectrophotometer against butanol: pyridine (15:1) solution as a blank. This absorbance was measured and lipid peroxidation activity was calculated from the extermination Coefficient of malondialdehyde (MDA) formed which was compared with the standard graph 18.

Reduced Glutathione (GSH) Assay: In test tubes, 0.2 ml tissue homogenate was taken to this 0.2 ml of 20% TCA (trichloroacetic acid) and 1 mM EDTA was added. Permitted the solution to set for 5 minutes. For 10 min every one test tube was centrifuged at 2000 rpm. 200 µl supernatant was transferred in a fresh set of experimental tubes and 1.8 ml of prepared Ellman’s reagent was added. Distilled water used to prepared the volume up to 2 ml. The absorbance of each sample was taken at 412 nm with a UV-visible spectrophotometer against water as the blank. Results were interpreted in mmol/gm tissue 19, 20.

Acetylcholinesterase (AChE) Assay: In a cuvette which was already contained 2.6 ml phosphate buffer (0.1 M, pH 8) and 100μl of DTNB, 0.4 ml aliquot part of the homogenate was mixed. Cuvette contents were assorted systematically by bubbling air, and in a spectrophotometer, absorbance was calculated at 412 nm. When absorbance achieves a constant value, basal reading was recorded. 20μl of the substrate like ACh was mixed and alter in absorbance was noted for ten minutes at intermission of two minutes. Per-minute alteration in the absorbance was determined 22.

Intraperitoneal (I.P.) Injection of Scopolamine in Rats: Memory impairment was produced by I.P. administration of scopolamine (0.1 ml, 0.3 mg/kg), injected at a stat 23.

Statistical Analysis: The experimental values were expressed as Mean ± Standard error of the mean (SEM). Statistical analyses were performed by one-way ANOVA followed by the Bonferroni t-test. 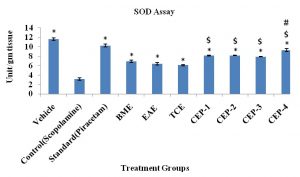 Effect on LPO Assay: After administration of scopolamine, significant enhanced in LPO level was observed in Fig. 2. In all treatment groups, the level of LPO was found significant (p<0.05) decreased in comparison to scopolamine. 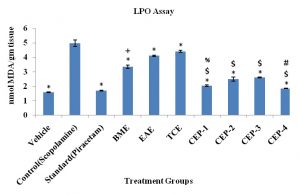 Effect on GSH Assay: After the administration of scopolamine significant decreased in GSH level was observed Fig. 3. 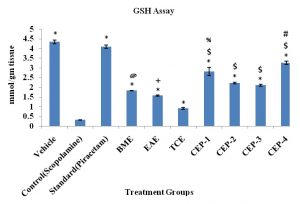 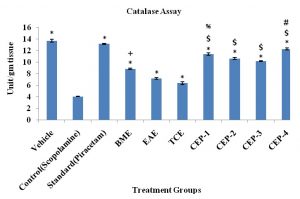 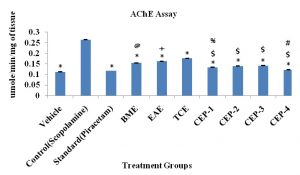 DISCUSSION: In this research, evaluate the effect of BME, TCE, and EAE on various biochemical parameters were ascertained. On Scopolamine treatment; Scopolamine produces significant oxidative stress 16, 24, 25. This increases oxidative stress, enhanced LPO and reduced GSH 25-27 and SOD level in the brain 26. The relationship of oxidative strain with amnesia could be proved by the conclusion from the previous studies. Streptozotocin injection is given by Intracerebroventricular (ICV) and colchicine produced the destruction of cognition through an enhanced oxidative strain in rat brain 28, 29. Scopolamine also significantly increased the AChE level in the brain 30, 31. Scopolamine antagonizes the muscarinic (M1) receptor. It enhanced the AChE level and produced memory impairment in animals. It leads to reduce the ACh level at cholinergic synapses 24. Also, Scopolamine increased AChE level by the decrease of hippocampal cholinergic neurons, as demonstrated by reduced choline acetyltransferase 30. In the brain, Catalase extent was also decreased by Scopolamine treatment 31. After administration of scopolamine; BME, TCE, EAE, and their CEPs were administered orally.

CONCLUSION: On the basis of significant results on biochemical parameters; probably it can say that the combinations of BME, TCE, and EAE provides a synergistic protective outcome by decreasing of LPO and AChE level but increase in SOD, GSH, and Catalase levels in rats brain. Further work may be carried out on a molecular level to know the detailed mechanism.

ACKNOWLEDGEMENT: We are obliged to Dr. Yashwant Singh Parmar University, Solan, Himachal Pradesh, India to help us in authenticating these plants.

CONFLICTS OF INTEREST: The authors do not have any conflicts of interest.