The objective of the present study was to evaluate the anticataleptic effect of Halela siyah (Terminalia chebula Retz) extract, on haloperidol induced catalepsy in swiss mice which were divided into four groups of six animals each. Animals in different groups were administered distilled water, scopolamine (1.0 mg/kg p.o) and hydroxy alcoholic (3:7) extract of Halela siyah (Terminalia chebula Retz), 1.5gm/kg and 3gm/kg p.o. respectively. Catalepsy was induced with haloperidol (1.0 mg/kg i.p.) administered 30 minutes prior to the drug administration. The duration of cataleptic time in the animals was assessed at 30 minute intervals up to 120 minutes and at the end of 240 minutes. Haloperidol induced catalepsy test was carried out for single dose study and after seven days of drug administration, to assess time and dose dependent effect of the test drug. The results showed that after the haloperidol administration, Halela siyah (Terminalia chebula Retz) extract in different doses was effective in reducing the cataleptic time significantly (p<0.01) in a time and dose dependent manner. The present study indicated that Bisfaij facilitates dopaminergic transmission and possibly acts as D2 receptor agonist and hence can be developed as an alternative/adjuvant drug in preventing and treating the extrapyramidal disorders.

Terminalia chebula Retz occurs scattered in teak forests, mixed deciduous forests and is extending in to forests of comparatively dry types. It occurs at an altitude of up to 1500-2000m. The species is found on a variety of soils, clayey as well as shady 1, 2.

It is found in sub- Himalayan tracts from the river Ravi Eastwards to west Bengal and Assam and is also found in Central and South India 3. Terminalia chebula Retz is called “the king of medicine” because of its extraordinary powers of healing  with a wide spectrum of biological activity.

It is now considered a valuable source of unique natural products for medicines against various diseases and also for the development of industrial products. According to the Unani system of medicine Halela siyah is beneficial in istirkha (paralysis), Izme Tehal (splenomegaly), Bawaseer (piles), Malikholia (melancholia), Juzam (leprosy), coarsely powdered fruit with almond oil is Mulayyin (laxative) 3, 4, 5, 6. Also the ripe fruit being purgative, tonic and carminative is used for diseases of spleen, blood nourishment, piles, brain tonic, cold in the head, opthalmia, and gum diseases and in paralysis 4, 6, 7.

Terminalia chebula Retz was found to possess antianaphylactic activities as it reduced the serum histamine levels in animals after induction of anaphylactic shock 11. Terminalia chebula Retz resulted in the reduction of peroxidation of membrane lipids in the mice liver as well as decrease in radiation induced damage to DNA in mice who were given aqueous extract of the fruit prior to whole body irradiation 12.

A world wide problem observed in the treatment of psychiatric disorders is the neuroleptic induced movement disorders and also because of limited affordability of atypical antipsychotic drugs. Moreover, the atypical antipsychotics can cause extra pyramidal symptoms 13. Catalepsy is observed in animals that have been given certain drugs, particularly dopaminergic blockers such as neuroleptics 14.

Strict correlation has been demonstrated between strength of cataleptogenic action of a neuroleptic and its efficacy. Thus, experimental catalepsy serves as a faithful index for the assessment of extra pyramidal syndromes in human beings and to study the behavioral mechanisms of neurochemical systems 15.

Haloperidol, a typical antipsychotic is known to induce catalepsy through the blockade of dopaminergic action in the nigro-striatal pathway producing extra pyramidal motor side effects such as dystonia, pseudo-parkinsonism etc 16.Central cholinergic system has also been involved in haloperidol-induced catalepsy as its enhanced stimulation or antagonism results increased or decreased cataleptic state 1.

Thus, keeping in view the earlier studies carried out for screening the effect of Terminalia chebula Retz on CNS and the involvement of dopaminergic system in the behavioural changes, the present study was envisaged to screen its anticataleptic activity.

Animals: Adult Swiss Albino mice of either sex (weighing 25-30gm) and 1-2 months of age bred in the Central animal house facility, National Institute of Unani Medicine, Bangalore, were used for the study. They were acclimatized before the experiment to the laboratory conditions of the institute. They were housed in polypropylene cages at 25±2oC, photoperiod: 12 hours natural light and 12 hrs dark, humidity 50%-55% and were provided with food and water ad libitum. Between 10:00 and 16:00 hrs all the experimental procedures were performed and each animal was used once. The experimental protocol was approved by Institutional Animal Ethics Committee for ethical clearance (protocol no. IAEC/IV/01/IA), study was carried according to CPCSEA guide lines.

Drugs and Dosage: The test drug samples i.e., dried fruits of  Halela siyah (Terminalia chebula Retz) was procured from the market at Bangalore and was authenticated by a pharmacognocist at the Regional Research institute (Ayurveda), Ashoka pillar, Jayanagar, Bangalore with a voucher number RRI/BNG/SMP/Drug Authentication/2009-10/337. After that it was powdered and the powder obtained was extracted with 70% hydro alcohol by Soxhlet apparatus at a temperature of 70oC – 80oC for 8 hours. The extract obtained was then concentrated using water bath, and yield percentage was calculated and was found to be 22.51% w/w. The doses of the drug for swiss mice were calculated as described by Frariech et al, interpolated from the clinical dose as stated in Unani texts 12.

The test drug Halela siyah (Terminalia chebula Retz)  and scopolamine (Sigma- Aldrich Chemicals, USA) were dissolved in Tween-80 (1%) solution (vehicle). All the drug solutions were freshly prepared and were administered to the animals orally using gavage with a guide cannula (4cm×1mm OD), while haloperidol (RPG Life Sciences Ltd. Mumbai) was dissolved in distilled water and given intraperitoneally (i.p.). The number of animals and the treatment received by each group is shown in table 1 and 2.

Experimental design: For all the tests except otherwise, healthy Swiss mice of either sex were divided into four (4) groups, having equal number of animals, as under:

Acute Study (Single dose study): The test was carried out by employing standard bar test 17. Catalepsy was induced with haloperidol (1.0 mg/kg i.p.) and was assessed at 30 minutes intervals until 120 minutes and at the end of 240 minutes 18, 19. Haloperidol (1mg/kg i.p.) was chosen so that it could elicit a moderate degree of catalepsy and thus enabled the detection of either attenuation or potentiation of the phenomenon.

Methodology: Animals in various groups as described were administered respective drugs 30 minutes prior to the administration of haloperidol 1mg/kg i.p. Catalepsy was assessed in terms of the time for which the mouse maintained an imposed posture with both front limbs extended and resting on a 4.5 cm high wooden bar (1.0 cm diameter). The end point for catalepsy was considered to occur when both front paws were removed from the bar or if the animal moved its head in an exploratory manner. Maximum cut-off time of 1100 seconds was applied. The animals were returned to their individual home cages after each assessment.

All observations were made between 10.00 and 16.00 hrs in a quiet room at 23-25oC. If an animal maintained the imposed posture for at least 20 seconds, it was considered to be cataleptic and was given one point. For every additional 20 seconds for which the cataleptic posture was maintained, one extra point was given. The animals were tested twice at 30 minutes time intervals and only the greater duration of immobility was considered 20.

Statistical Analysis: The data of different groups were statistically analyzed by using ANOVA One way followed by Tukey-Kramer multiple comparison test. The values were expressed as mean ± SEM, p < 0.05 was considered statistically significant.

Physicochemical studies: The successive extractive values, total ash, acid insoluble ash and water soluble ash are given in the Table 1. The results showed that the highest extractive value was in hydro-alcoholic solvent (27.44 ±0.61) followed by aqueous (21.32±0.33) and alcoholic solvents (5.72±0.53). The moisture content estimated by dry oven and Toluene distillation method showed 9.70% and 10%, respectively. The volatile content was found to be <1%, while the presence of fixed oil was observed. The pH was determined in 1% and 10% aqueous solution at 350C of temperature and found to be 6.6 and 6.3, respectively. The values are given in Table 1.

TABLE 1 : PHYSICOCHEMICAL OBSERVATION OF THE SEEDS OF TERMINALIA CHEBULA RETZ.

Acute study (Single dose study): In the acute study, the results showed that at 30 minute all doses of the test drug gave cataleptic scores similar to that of the negative control. However, from 60minutes onwards after haloperidol administration, the standard drug (scopolamine) and all other groups showed significantly (p<0.01) lower cataleptic time than the negative control group.

The test drug was actually more protective against the haloperidol induced catalepsy than the standard drug (scopolamine). The mean cataleptic time of different groups at various time intervals when compared with respect to negative control at 240 minutes, showed statistically significant (p<0.01) reduction in the cataleptic score. 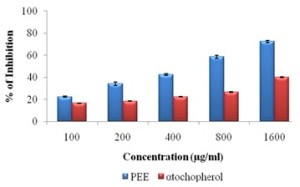 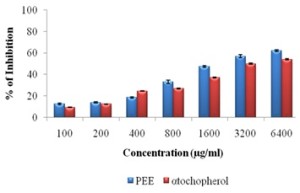 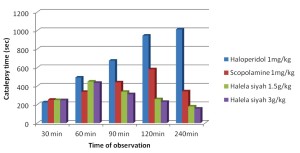 However, from 60 minutes onwards, after haloperidol administration, all the doses of the test drug and standard drug resulted in significantly lower cataleptic score than the negative control group.

DISCUSSION AND CONCLUSION: The data obtained both in humans and laboratory animals, point to the blockade of a large number of the striatal dopamine D2 receptors by neuroleptics such as chlorpromazine, haloperidol and reserpine as a primary cause of neuroleptic induced extrapyramidal side effects. Thus catalepsy is used as a model to assess the extrapyramidal effects of  antipsychotics. Besides dopamine receptor blockade and catecholamine depletion, other neurochemical hypothesis has been proposed for the development of catalepsy such as striatonigral, GABAergic, cholinergic, glutamate and serotonergic etc 21, 22.

In addition to various neurotransmitters, many preclinical and clinical studies have also proposed reactive oxygen species as causes of haloperidol induced toxicity. In an attempt to confirm that the observed catalepsy is not caused by peripheral mechanism, anticholinergic agent scopolamine, which is transported into the brain in vivo, was administered intraperitoneally. In presence of scopolamine, the catalepsy induced by the haloperidol was remarkably reduced, indicating that catalepsy reflects the effect in the central nervous system. In the present study Halela siyah (Terminalia chebula Retz) was protective against drug induced catalepsy as effectively as that of standard drug scopolamine.

CONCLUSION: The fruit of Terminalia chebula Retz has been used in a multitude of diseased conditions  since from ages. The medicinal property of the Terminalia chebula Retz has been variedly described in different types of traditional medicines like Unani, Ayurveda, European and  American. From the above study, it can be concluded that the drug possess protective effect in chemically induced catalepsy and can be used for various neurological and neurodegenerative disorders also. The presence of different pharmacologically active constituents may be responsible for the same. However, further study is needed to know the exact mechanism.