INTRODUCTION: The oxidative stress results from an imbalance between free radicals and antioxidants wherein the production of oxidants overtakes that of antioxidants 1-3.

Therefore, antioxidants are vital to maintaining the optimal health and well-being of cells and systems 4. Free radicals are linked to an increased risk for cardiac malfunctions, cancer, and other chronic diseases 5, 6. Moreover, it damages complex cellular components (such as DNA lipids and proteins) 7.

Previous research has paid considerable attention to the antioxidant properties of plants (vegetables, fruits, medicinal herbs, etc.) 8, 9, which are rich in various types of molecules that are able to scavenge free radicals, including terpenoids (including carotenoids), nitrogen compounds (alkaloids, betalains, amines), phenolic compounds (phenolic acids, quinones, flavonoids, lignans, coumarins, tannins) and other endogenous metabolites 10, 11. Studies show that most of these compounds possess antiatherosclerotic, antimutagenic, antiinflammatory, anticarcinogenic, antibacterial, and antiviral actions 12 and are correlated with lowering the effects of diabetes, cardiovascular disease, and aging-related diseases 5, 6.

DNA is a key objective of ROS, and DNA damage caused by ROS is closely related to several pathological situations, for instance, cancer, cardio-vascular diseases, and diabetes 13. Medicinal plants include different components of antioxidants, such as polyphenolic and volatile compounds, which protect cells from the adverse effects of ROS 14.

These compounds have an antioxidant effect due to their ability to give electrons to ROS, chelate metal ions, and stimulate antioxidants 15. The exploration of natural antioxidants has therefore become a popular field of research in recent years, and traditional medicine is regarded as a point of research 16.

C. molmol is a spiny and sturdy shrub with a short trunk, which is about 4m tall. It is a perennial tropical plant mostly found in semi-arid and arid regions of Saudi Arabia, India, and East Africa 17. The outer bark, which is whitish, bluish or silvery in color and peels in large and small thin paper-like flakes from the greener under-bark. The bark exudates viscid, mostly unscented, and hard-translucent yellowish gum resin. All branches are knotted, and spine-tipped 18. On the other hand, the Myrrh is mostly grown in Eastern Mediterranean countries, South Arabia, and Africa.

This air-dried mass mostly contains white patches, which are about the walnut-size and are the basis of myrrh resin. Summer is considered the ideal season for Myrrh extraction.

The major volatile oils of the shrub include sterols, steroids, and sesquiterpenes, which, together, constitute 2 to 10% 12. On the other hand, ethanol and water-soluble resins contain 30 to 60% and 25 to 40% of proteins and polysaccharides, respectively 21. The gum generates a wide variety of sugars upon hydrolysis 22. The Myrrh's odor is attributed to its furano sesquiterpenes, which are also suggested to possess hypoglycaemic, anti-fungal, antibacterial, and anesthetic properties 23.

Moreover, extracts of C. molmol including curzarene and 2 sesquiterpenes, furaneudesma-1-3-diene have been shown to activate opioid receptors in CNS 24. Additionally, the gum is shown to possess an oxidase enzyme. It has been demonstrated that mixing of oleo-gum-resin with water results in the formation 25.

The myrrh of C. molmol has been in use for years for treating wound injuries. A number of studies have proven the health benefits of myrrh as a constituent of medicine 23. Likewise, Commiphora species are reported to exert anti-ulcer, anti-inflammatory and analgesic, hypolipidemic, and anti-oxidant effects 17, 18, 22, 23, 26, 27. Commiphora tree is also well-known to contain antischistosomal and antibacterial properties 27, 28.

The 8-OHdG assay has been shown to be useful to screen medicinal plants for their antioxidative properties and to prevent DNA damage induced by different drugs 14, 29.

Accordingly, the present study aims to evaluate the ability of oleo-gum resin of C. molmol (Myrrh) to exert beneficial effects in preventing DNA damage induced by oxidative stress. The effect will be evaluated by measuring 8-Hydroxy-2-deoxy-guanosine (8-OH-dG), which is a well-established marker to assess DNA damage.

Plant Material: The oleo-gum resin of C. molmol (Myrrh) was purchased from a local traditional herb market in Al-Madinah Al-Menawwarh, Kingdom of Saudi Arabia. Plants were identified by Professor SamyZalat, Biology Department, Faculty of Science, Taibah University. 100 mg of the C. molmol oleo-gum resin mass material was crushed into a fine powder using sterile mortar and pestle and suspended overnight in DEMSO at room temperature, then warmed until 60 °C with continuous shaking to get a final concentration. A series of concentrations were then prepared from the stock suspension 31.

Subjects: In accordance with the institutional review board of Taibah University, the recruited volunteers were healthy, non-smoking adults (above 18 years of age) recruited from Taibah University. Blood samples were obtained from these volunteers, who were prevented from taking any medication during the course of the experiment. A volume of 0.9 ml heparinized blood was added to 9.1 mL of Peripheral Blood lymphocytes for chromosome analysis, max complete karyotyping media in order to establish lymphocyte cultures. Then, this was incubated at 37 °C temperature in a CO2 incubator with suitable moisture content 30.

Phytochemical Screening: The occurrence of secondary metabolites, such as saponins, tannins, flavonoids, coumarins, alkaloids, quinone, anthra-quinones, and terpenoids, was tested phyto-chemically. The positive results depend on the color change or precipitation that occurred following the addition of specific reagents.

Then, the cultures were incubated for 72 h in a CO2 incubator at 37 °C 32. Various plant extracts of different concentrations (10,100 and 1000 µg/mL) were used, and all concentrations were dissolved in dimethyl sulfoxide (DMSO) 24 h prior to the end of the incubation interval. A vehicle was used for treating the control cultures. The mentioned concentrations were chosen according to earlier studies 31, 33.

Determination of 8-OHdG Assay: The 8-OH-dG is a radical-damaged hydroxyl-guanosine that is usually found during regular metabolism. It increases ROS and RNS generation 8-OH-dG for the estimation of oxidative damage of DNA damage and is regarded as a valuable biomarker.

The 8-OHdG assay was measured according to Khabour et al., 2014 2. For this purpose, blood cultures were incubated for 72 h at 37 °C, and washed with RPMI medium, which contains glutamine, Phytohaemagglutinin, and Penicillin-Streptomycin, followed by plant extract and incubation at 37 °C for 6 hours and centrifuged at 1000 xg.

About 200 ul of the filtrate was used for competitive assay of 8-OH-dG by ELISA conferring to the manufactured constructions (Stress Marq’s &-OH-dG EIA kit; Biosciences, Canada). 8-OH-dG antibodies and the culture media samples were added in a 96-well plate, which was pre-coated with 8-OH-dG monoclonal antibody. Sample 8-0H-dG competed with the 8-OHdG bond on the plate for 8-OH-dG antibody binding sites.

Statistical Analysis: Data were analyzed by Graph Pad Prism software (version 5). The data were presented as mean ± SEM, and ANOVA was performed, followed by the Tukey post-hoc test to ascertain the significance. P < 0.05 was considered significant.

The 8-OH-dG Levels: The present study evaluated the effects of an oleo-gum resin of C. molmol (Myrrh) on blood lymphocytes by measuring 8-OHdG after 6 H of treatment. The results showed remarkable activity in a dose-dependent manner Table 1 and Fig. 1. A significant decline in 8-OH-dG levels was noticed in samples treated with oleogum resin at different concentrations. 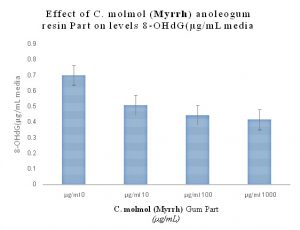 DISCUSSION: The World Health Organization (WHO) evaluates that about 80% of the world's occupants depend predominantly on customary means for health care. Herbs are absolutely the most dominant natural antioxidants and are extremely crucial due to their antioxidant and anti-aging properties. Natural products possess an indefinable variety of chemical structures. The activities of these lead compounds can be improved by de novo synthesis and by chemical management 12. Currently, numerous medicinal plants proved to be effective in fighting various illnesses, which leads to widespread screening for the presence of medicinally beneficial components. Antioxidants are broadly utilized as components in dietary supplements and used to keep up well-being and avoid oxidative stress-induced illnesses, for example, diabetes, atherosclerosis, aging, cancer, and inflammation. Several antioxidants have been obtained from various plant materials recently 9, 22, 29. Natural antioxidants are likewise in intense interest for application as food additives and nutraceuticals due to buyer inclinations 35. Apart from their uses in medicine, these compounds are utilized as food and cosmetic preservatives and for inhibiting the degradation of gasoline and rubber. Antioxidants are also used as essences to protect against food decomposition. Plant polyphenols are specifically significant among natural antioxidants 35.

Nowadays, the exploration for natural compounds abundant in antioxidant, antimicrobial, and anti-cancer properties is heightening a direct result of their significance in controlling numerous chronic disorders for screening of selected example, cancer and cardiovascular infections 36. It has been surveyed that roughly 66% of anticancer medications endorsed worldwide till 1994 were obtained from plants 37.

These phenolic compounds are transcendentally accessible in guggul (Myrrh), too, to some extent, adds to its gigantic organic capacity against varied chronic diseases 39. Anti-oxidants cannot have powerful antiangiogenic activity, between those that have been recognized include vitamin D, vitamin C, vitamin A, vitamin E, rosmarinic acid, 3-hydroxyflavone, 3', 4'- dihydroxyflavone and 2', 3'-dihydroxyflavone 40, 41. Free radicals are substantial indication that free radicals prompt oxidative damage to biomolecules and show a vital part in aging, cardiovascular diseases, aging, cancer, inflammatory disease and a range of other disorders 3, 4.

Antioxidant and defensive properties of C. molmol are due to the substance of antioxidant active components such as sesquiterpenes eugenol, and cuminic aldehyde 40. The presence of terpenes (specifically sesquiterpene) in C. molmol may explain the antioxidant mechanisms as described previously, as terpenes may show their pharmacological effect through antioxidant properties. These active compounds consider very potent in contributed to its significant antioxidant 4. Antioxidants can alter the physiological redox balance that alleviate reactive oxygen species (ROS) that tend to be prevalent in low oxygen tension areas such as that in the tumor 36.

CONCLUSION: Different concentrations of an oleo-gum resin of C. molmol (Myrrh) showed the potentially significant capacity to abrogate oxidative DNA damage. It may be due to the presence of several chemical constituents of C. molmol, which possess promising antimutagenic and oxygen radical scavenging potential. Antioxidant and defensive properties of C. molmol are due to the substance of antioxidant active components such as sesquiterpenes eugenol, and cuminic aldehyde. An oleo-gum resin of C. molmol (Myrrh) seems to be interesting for further pharmacological investigations.