ABSTRACT:Twenty two endophytic fungi were isolated from anti-diabetic plants Momordica charantia and Trigonella foenum-graceum. Ethyl acetate extracts of all fungal isolates were tested for inhibition of aldose reductase and carbohydrate metabolizing enzymes. Ethyl acetate extracts of nine endophytic fungi were found to be positive for α- amylase and α- glucosidase inhibitors. Crude extracts of fungal isolates PTFL005 and PTFL006 showed promising inhibition activity on α- amylase with an IC 50 value of 15.48 and 13.48μg/mL respectively. Whereas, the control acarbose had 22.38 μg/mL of IC 50 value for α- amylase at similar experimental condition.  Fungal isolates PTFL006 and PTFL011 were found to have potent α- glucosidase inhibitors with an IC 50 value of 17.37 and 10.71μg/mL which was close to the standard acarbose (6.53μg/mL). The only one fungal isolate PMCF003 showed reasonably better inhibition for aldose reductase with an IC50 value of 40μg/mL as compared to standard control quercetin (15μg/mL). All the active endophytic fungal isolates were identified by DNA sequencing method. The most active isolates identified asTrichoderma atroviride (PMCF003) and Stemphylium globuliferum (PTFL005, PTFL006 and PTFL011) were reported for the first time as endophytes in these plants from India.

INTRODUCTION: Hyperglycemia defined as a heterogeneous disease caused due to deficiency of insulin secretion and action1. International Diabetes Federation has reported that 8.3 % (366 million) of adults were infected with diabetes in the year 2011 and this number may rise up to 552 million people by the year 2030 2. Post prandial hyperglycemia is caused due to action of two enteric enzymes (α-amylase and α-glucosidase) that are attached to the brush border of the intestinal cells.

Therefore inhibition of these two enzymes leads to slow rate of carbohydrate digestion and glucose absorption3, 4. The known glucosidase inhibitors commercially available are acarbose and miglitol that competitively and reversibly inhibits α-glucosidase enzyme from intestine as well as pancreas, but these synthetic drugs possess side effects such as liver disorders, flatulence, abdominal pain, renal tumours, hepatic injury, acute hepatitis, abdominal fullness and diarrhoea5-7.

About 26.1 % of Indian population are found to be suffering from diabetic neuropathy which is an important complication of diabetes mellitus 8. Aldose reductase is the first and rate-limiting enzyme in the polyol pathway that reduces glucose to sorbitol, inhibition of aldose reductase would delay or substantially prevent these secondary diabetic complications as studied in animal models and also evaluated in clinical trials 9. High levels of aldose reductase have been detected in the cornea, lens, kidney and myelin sheath 10.

Fresh samples of Momordica charantia (fruit) and Trigonella foenum-graceum (leaf and twig) were collected from the nearby market located at Devanahalli, Bangalore, India. Plant materials were collected in a sterile polythene bag and processed within one hour of sample collection to avoid contamination. Samples were thoroughly washed under running tap water to remove debris and cut into 1 cm long.

Fermentation and extraction of secondary metabolites

Two or three discs of fresh mycelium grownfrom mother culture was inoculated into 500 mL Erlenmeyer flask containing 300 mL YPF(Yeast extract- 3g, Peptone- 10g, Fructose- 20g, Distilled water -1000mL, pH-6)  and incubated at room temperature for 21 days under stationary conditions with intermittent shaking. After incubation, ethyl acetate (1:1 ratio) was added to flask containing media and kept on shaker (150 rpm) for overnight. The mycelial mass was separated from the broth by filtration and macerated with ethyl acetate to get intracellular secondary metabolites. The organic phase of extraction mixture was separated and evaporated to dryness before storing at 4°C for further analysis.

100 μL of the porcine pancreatic amylase (PPA) solution (1.1 U) was added to 100 μL of test substance and incubated at room temperature (RT) for 20 minutes. The reaction was initiated by the addition of 100 μL of 1% soluble starch solution and incubated at 37°C. The reaction was arrested after 10 min of incubation by the addition of 200 μL of dinitrosalicylic acid colour reagent. The tubes were kept in a boiling water bath for 10 minutes, cooled and diluted with distilled water and absorbance was measured at 470 nm 15. Acarbose was used as the standard alpha-amylase inhibitor and vehicle was used as negative controls. All the assays were carried out in triplicates and average percent inhibition of enzymes by the fungal extract was calculated using the following formula.

Alpha glucosidase inhibition activity of ethyl acetate extract of fungal isolates were measured in microplate wells using the method explained by Suneel et al 16.  α –glucosidase enzyme solution was prepared in PBS (pH 7.0) and diluted to 0.4 U/mL of working solution. The test solution was prepared by mixing 50μL of enzyme with 10μL of fungal extract and diluted to 150μL with 100mM phosphate buffer pH 7.0 and mixed well. The reaction mixture was incubated at RT, after 5 min 50μL of substrate p-nitro phenyl α-D-glucopyranose (20mM) was added.  The reaction mixture was mixed well before incubating for 15 min at RT, later 30μL of sodium carbonate solution (200mM) was added to stop the reaction.  The optical density of a yellow coloured product measure at 405nm using a microplate reader.  Control and test blank OD’s were obtained by replacing enzyme with buffer17.

Crude aldose reductase was prepared from 2-3 month old WNIN male rate lens by dissecting its eye balls. The dissected lenses were homogenized and diluted 10 times using 100 mM Phosphate buffer pH6.2. the homogenized sample was centrifuged at 15000 x g for 30 min at 4°C and the supernatant was used as enzyme source (ALR2)18.  The protocol was followed as per the animal ethical committee approval in NIN, Hyderabad, India.

Aldose reductase enzyme activity in the lens extract was carried out as described by Hayman and Kinoshita 19. The 1 mL of assay mixture contained 50 µmol of potassium phosphate buffer pH 6.2, 0.2 M lithium sulfate, 5 µmol β-mercapto ethanol, 10 μmol DL-glyceraldehyde and enzyme preparation (rat lens). The assay mixture was incubated at 37oC and initiated reaction by the addition of 0.1 μmol of NADPH. The rate of oxidation of NADPH was measured at 340nm using a spectrophotometer (Lamda 35, Perkin-Elmer, Shelton, U.S.A.). Specific activity of ALR2 was expressed in µmoles of NADPH oxidized /h/100 mg protein.

Isolation of endophytic fungi and extraction of secondary metabolites

A total of 11 endophytic fungi were isolated from bitter gourd fruits and 11 from menthya leaves. All the isolates of menthya are from leaves and none from any of the twigs part. All the endophytic fungi are subcultured in to new agar plates and stored in multiple methods such as agar plates, agar slants and sterile distilled water. Twenty two fungal isolates were grown in large scale separately and extraction of secondary metabolites in ethyl acetate solvent yield about 0.5 to 1.0gm/L of dry powder per fungi.

All the 22 endophytic fungal extracts were tested for PPA inhibitors and only 9 of them have shown significant inhibition for both enzymes. Percentage inhibitions of PPA by different fungal isolates at various concentrations was calculated and plotted in the Figure 1 for both MC and TF. Crude extract of nine endophytic fungi isolate PTFL005 and PTFL006 have IC50 values of 15.48 and 13.48μg/mL respectively. Both highl active isolates are isolated from the leaf part of the menthya plant. The IC50 value of these two fungal extract was less than IC50 value of standard drug acarbose (22.38μg/mL) when assayed under similar condition. The IC50 values for all the fungal extract was calculated along with the standard anti-diabetic drug acarbose as control and shown in the Figure 2. 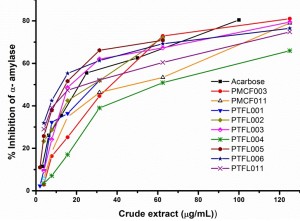 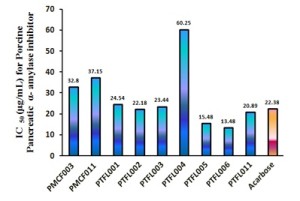 The same set of 22 endophytic fungal extracts tested for α-amylase inhibitors were also tested for α-glucosidase inhibitors. Ethyl acetate extracts of nine isolates had shown very good inhibition activity for α-glucosidase enzyme. The percentage inhibition of glucosidase enzyme by the different concentrations of crude extract was measured and plotted against the concentration as shown in Figure 3. 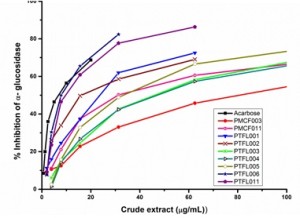 Two isolates PTFL006 and PTFL011 had IC50 values of 17.37 and 10.71μg/mL respectively when compared to acarbose IC50 value (6.53μg/mL) under similar experimental condition. These two most active isolates were also from leaves of the menthya plant.  The IC50 values calculated for all the active fungal extracts along with the standard acarbose and plotted against concentration of crude extracts as shown in the Figure 4. 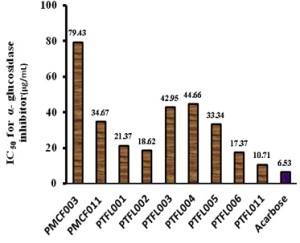 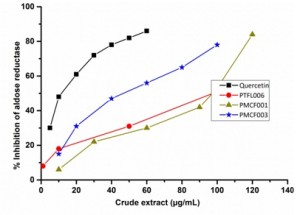 The IC50 values for these endophytic fungi against ALR2 was determined and represented in the Figure 6. PTFL006, PMCF001 and PMCF003   showed aldose reductase inhibition with an IC50 value of 100, 78 and 40 μg/ml respectively. PTFL005, PTFLl006 and PTFL011 have shown percentage inhibition against aldose reductase at the concentration range 0-100 μg/mL with 46, 51 and 35 % respectively. 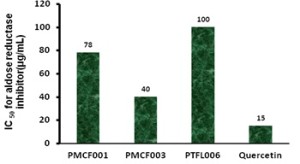 The endophytic fungal isolates which showed inhibition for at least one of the three enzymes α-amylase, α- glucosidase or aldose reductase inhibitors were identified by rDNA molecular method. Conserved DNA region for all these fungal isolates was purified, amplified and sequenced for their identification. The sequence were submitted to the Gene Bank and obtained Gene Bank accession number. Based on the sequence similarity closest matching in the blast search was selected and identified the fungal isolates. The identified species, gene bank accession number and their percent nucleotide homology with the existing data base are represented in the Table 1.

DISCUSSION: Several studies have reported the use of herbal extracts as antidiabetic, however these extracts have not proved to be successful as medicines due to lack of specific standards being prescribed for herbal medicines and supportive animal/clinical trials 23. Aqueous methanol extracts of M.charantia seeds have shownan α-glucosidase inhibitory activity 24. There was a significant decrease (p<0.01) in the fasting blood glucose levels in streptozotocin (STZ) induced diabetic rats treated with the MC extract, as compared to the untreated diabetic rats.

M. charantia extract known to exhibit anti-hyperglycemic effect in the streptozotocin or alloxan-induced diabetic rats 25 26. The compound 4-hydroxyleucine present in the seeds of TF have proven to stimulate insulin production 27. It has been reported that there was a significant reduction in blood glucose level in alloxan-diabetic rats treated with aqueous extract of fenugreek leaf as compared to healthy rats 28.

In the present study we have isolated endophytic fungi from these two plants and evaluated their antidiabetic activity. Endophytic fungi have the capability to produce bioactive compounds such as alkaloids, terpenoids, steroids, quinones, lignans, phenols and lactones 29. In a study six endophytic fungi were isolated from Swietenia macrophylla King seeds and five ethyl acetate extracts had showed better glucosidase inhibition activity than acarbose with lowest IC50 values was 73.64 µg/mL. These α-glucosidase inhibitor was found to be belongs to flavonoid group 30. Structure activity relationship studies have proved that ganoderma acids isolated from Ganoderma lingzhi as a potentα-glucosidase inhibitor 31.  In the present study crude ethyl acetate extract of two isolates belonging to Stemphylium globuliferum species isolated from Menthya leaf showed highest PPA inhibitory activity with an IC50 values of 15.48 and 13.48μg/mL.  These two  crude extracts  IC50 values are far below the IC50 value of standard drug acarbose (22.38 µg/mL) under similar experimental condition, which indicates these isolates has higher potential for production of pharmaceutically important drug if purified further.  There are three isolates belonging to the Stemphylium globuliferumspecies which also showed very good α-glucosidase inhibition activity. The IC50 value for these are ranging from 10-18 µg/mL which is very near to the standard acarbose (6.53 µg/mL) tested under similar in-vitro condition.

To our present knowledge there are no reports on Stemphylium sp having α-amylase and α-glucosidase inhibitors. This is the first study on Stemphylium sp isolated from menthya and proved to have a potent antidiabetic agent. Trichoderma sp isolated from bittergourd found to be the potent aldose reductase inhibitors with an IC50 value of 40 μg/mL. The endophytic microorganisms are excellent sources of bioactive natural products having great demands in health care sector34. Therefore exploration of these endophytic fungi having the capability to produce antidiabetic compounds will lead to revolution in biotechnology industry.

ACKNOWLEDGEMENTS: Authors PN, SL and AK would like to thank Admar Mutt Education Foundation for the financial support in conducting this research. SL and PN are thankful to Manipal University for their PhD registration.