ABSTRACT: Diabetes is a noncommunicable chronic metabolic disorder characterized by high blood glucose level in the body. One of the antidiabetic therapeutic strategies is the inhibition of carbohydrate-digesting enzymes such as α-amylase and α-glucosidase. In the present study methanolic extract and its two fractions (Ethyl acetate and n-butanol) of the whole plant of Trichuriella monsoniae were evaluated for their effect on α-amylase and α-glucosidase enzymes by using in-vitro assays. The plant extracts were used at varying concentrations to ensure which concentration of the extract/fractions of the plant causes the most inhibition. Phytochemical analysis of the extract and its fractions indicated the presence of flavonoids, steroids/terpenoids, carbohydrates, saponin, phenolic compounds. While tannins and alkaloids are absent.  n-butanol fraction shown the prominent α-amylase and α-glucosidase enzyme inhibitory activities (IC50 4.09 mg/ml and 3.30 mg/ml respectively) than methanolic extract and its ethyl acetate fraction, and it was well comparable with the standard drug acarbose (for α-amylase IC50 3.62 mg/ml and for α-glucosidase IC50 2.19 mg/ml). Further, the Total phenolic and flavonoid contents were estimated. These results suggest that Trichuriella monsoniae with a great potential to control postprandial hyperglycemia might be a novel resource for the management of type 2 diabetes.

INTRODUCTION: Diabetes mellitus is a chronic metabolic disorder that occurs due to carbohydrate dysmetabolism syndrome and characterized as high plasma glucose level. Owing to urbanization, the increase in obesity, bad food habits, older age, and lesser physical activities have become a most prevalent disorder worldwide 1. Diabetes is a global health concern, affecting 425 million people worldwide. The global prevalence of diabetes is expected to reach 629 million by 2045. India, China and the United States will have the largest number of people with diabetes.

India has become the second largest country with diabetic patients, 69 million as of 2017 report 2. Treatment of diabetes includes: Improvement of the activity of insulin at the objective tissues, with the utilization of sensitizers (biguanides, thiazolidine-diones); incitement of endogenous insulin discharge with the utilization of sulfonylureas (glibenclamide, glimepiride), and a decrease of the interest for insulin utilizing particular enzyme inhibitors (acarbose, miglitol).

Nonetheless, there is a trouble of undesirable reactions like the looseness of the bowels, nausea, dyspepsia, myocardial infarction, peripheral edema and tipsiness with the utilization of these medications. Plants have been a commendable wellspring of medications that have been gotten specifically or in a roundabout way from them. It is accounted for that around 800 plants may have hostile to diabetic potential.

Hypoglycemic activity of therapeutic plants is because of their capacity to restore the pancreatic tissues by bringing about an increment in insulin yield, hindering the intestinal ingestion of glucose or encouraging metabolites in insulin subordinate processes 3. Trichuriella monsoniae Bennet belongs to the family Amaranthaceae is an annual prostrate herb, rooting at nodes is commonly found in gravelly and sandy localities in scrub jungles. Leaves are linear (or) filiform, clustered at nodes, subsessile, acute. Flowers appear as cylindric spikes with pink color. Traditionally, the whole plant is used to treat diabetes, urinary calculi, wounds, sore throat and as hepatoprotective and diuretic. The plant is commonly known as Errapindipulu, pedda telaga chettu. The methanolic extract of the whole plant of Trichuriella monsoniae was reported to contain three known flavonoidal C-glycosides i.e., isoswertisin, 2-0-β-D-galactosyl isoswertisin and 2-0-β-D-xylosyl isoswertisin 4. It is also reported for anti-hyperglycemic activity 5, hepatoprotective activity 6, analgesic, anti-inflammatory and antibacterial activities 7. For the best of my knowledge, previous studies have not investigated the α-amylase and α- glucosidase enzyme inhibitory activities of Trichuriella monsoniae. Therefore, this work was undertaken to evaluate the probable mechanism behind its hypoglycemic activity.

Collection of Plant Material: Trichuriella monsoniae was collected in November 2017 from Kakatiya University campus, Warangal, Telangana, India and authenticated by Dr. V. S. Raju (taxonomist), Department of Botany, Kakatiya University, Warangal. The voucher specimen (KU/UCPSC/ 29/2017) of this plant material is being maintained in the herbarium of the Department of Pharmacognosy and Phytochemistry, U.C.P.Sc, K.U, Warangal for future reference. The Voucher specimen of the plant is deposited in the Department of Pharmacognosy, University College of Pharma-ceutical Sciences, Warangal, Telangana, India.

Preparation of Methanolic Extract and its Fractions: The whole plant of Trichuriella monsoniae (1 kg) was collected, washed under running tap water, dried under shade and then ground into coarse powder and macerated with methanol at room temperature. After exhaustive extraction, the methanolic extract (METM) was concentrated under reduced pressure (Rotavapour, Switzerland) to yield brownish green colored mass. The methanolic extract was suspended in water and fractionated with ethyl acetate (EATM) and n-butanol (BLTM) in succession.

Phytochemical Screening: The methanolic extract and its two fractions (EATM and BLTM) were subjected to phytochemical screening using dried samples for the presence of different classes of organic compounds like alkaloids, flavonoids, terpenoids, carbohydrates, tannins, saponins, etc. The results are shown in Table 1.

Determination of Total Phenolic Content: The total phenolic content of the extract was determined using Folin-ciocalteu colorimetric method as described in the literature 8. The extract (100-1000 µg/ml) or standard solution of gallic acid (10-100 µg/ml) was added to 25 ml volumetric flask containing 9 ml of distilled water. A reagent blank was prepared using distilled water instead of a sample. 1 ml of Folin-ciocalteus phenol reagent was added to the mixture and shaken. After 5 min, 10 ml of 7% aqueous sodium carbonate solution was added to the mixture. The solution was diluted to 25 ml with double distilled water and mixed.

After incubation for 90 min at room temperature, the absorption against prepared reagent blank was determined at 760 nm (ELICO SL159 UV-Visible Spectrophotometer). Quantification was done concerning the standard gallic acid and expressed as gallic acid equivalent (GAE) in mg per gram of extract.

Determination of Total Flavonoids Content Assay: The total flavonoid content of the extract was measured by the aluminum chloride colorimetric method as described in the literature 8. Extract (10-100 µg/ml) or standard solution of Rutin (10-100 µg/ml) was added to 10 ml volumetric flask containing 4 ml double distilled water. To the flask 0.3 ml of 5%, sodium nitrite solution was added. After 5 min, 0.3 ml of 10% aluminum chloride solution was added at 6th min, 2 ml of 1M NaOH was added, and the total volume was made up to 10ml with double distilled water. The solution was mixed well, and the absorbance was measured against prepared reagent blank at 510 nm (ELICO SL159 UV-Visible Spectrophotometer). The total flavonoid content was expressed as Rutin equivalent in mg per gram of extract.

α- Amylase Enzyme Inhibition Assay: This assay was carried out by using a modified procedure of MI Kazeem 9. A stock solution of test extract/s was prepared by dissolving up to 10 mg of each extract in 1ml of DMSO. A total of 250µl of test extract/s (1.25-10 mg/ml) was placed in a tube and 250 µl of 0.02M sodium phosphate buffer (pH 6.9) containing α-amylase solution (0.5 mg/ml) was added. This solution was pre-incubated at 25°C for 10 min, after which 250 µl of 1% starch solution in 0.02M sodium phosphate buffer (pH 6.9) was added at particular time intervals and then further incubated at 25 °C for 10 min. The reaction was terminated by adding 500 µl of Di-nitro salicylic acid (DNS) reagent. The tubes were then incubated in boiling water for 5 min and cooled to room temperature. The reaction mixture was diluted with 5ml distilled water. The generation of maltose was quantified by the reduction of  3, 5 di-nitro salicylic acid to 3- amino-5- nitro salicylic acid and the absorbance was measured at 540 nm (ELICO SL159 UV-Visible Spectrophotometer).

A control was prepared using the same procedure replacing the extract with distilled water.

α- Glucosidase Enzyme Inhibition Assay: The α-glucosidase inhibitory activity was determined according to the method described by MI Kazeem with some modifications 9. The stock solution of test extract/s was prepared by dissolving up to 10 mg of each test extract/s in 1 ml of DMSO. A total of 50𝜇l of extracts (1.25-10 mg/ml) and 100 μl of yeast α-glucosidase solution in phosphate buffer (pH-6.9) were incubated at 25 °C for 10 min followed by the addition of 50 µl of 5 mM/L p-nitrophenyl-α-D-glucopyranoside  solution in 0.1M phosphate buffer (pH 6.9). The reacting mixture was then incubated at 25 °C for 5 min the reaction was terminated by adding 3 ml of 100 mM sodium carbonate solution into the mixture to stop the reaction and the absorbance of liberated p-nitrophenol was read at 405 nm (ELICO SL159 UV-Visible Spectrophotometer).

Acarbose was used as a positive control (standard) and the inhibitory activity of α-amylase and α-glucosidase were calculated by using the following formula.

Preliminary Phytochemical Screening of Extract and its Fractions: The preliminary phytochemical screening showed the presence of different phytoconstituents such as flavonoids, phenolic compounds, steroidal/triterpenoid compounds, and their glycosides, saponins in the methanolic extract of Trichuriella monsoniae and its two fractions (EATM and BLTM).

The Total Phenolic Content and Flavonoid Content Estimation: The concentration of polyphenols present in the test extract/s is calculated by using a standard curve prepared with gallic acid. The total phenolic content of methanolic extract and its fractions (EATM and BLTM) of Trichuriella monsoniae was found to be 83 mg, 111.5 mg and 136 mg of GA equivalent per gram of extract respectively. 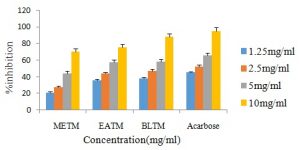 DISCUSSION: The enzymes α-amylase and α-glucosidase are related to postprandial high blood glucose levels (BGL). α-amylase is connected to breaking the polysaccharides into disaccharides and oligosaccharides. α-glucosidase works on the disaccharides and polysaccharides to break them into glucose monomers aiding carbohydrate digestion. Inhibition of these enzymes can lead to a control on postprandial blood glucose levels by controlling carbohydrate digestion and hence controls diabetes significantly.

Enzyme inhibition assay for plant extract determines the inhibitory capacity of the test samples against the enzymes, and it is one of the mechanisms through which a plant could show its antidiabetic activity. Flavonoids have already been proved and reported to exert enzyme inhibitory action, thereby, helps in the regulation of glucose absorption and consequently glucose homeostasis 10.

It is observed that the prominent percentage of inhibitory effect on both α-amylase and α-glucosidase enzymes by the butanolic fraction of Trichuriella monsoniae could be due to a major amount of total phenol and total flavonoid content found in this fraction. α-amylase and α-glucosidase enzyme inhibitory activity of methanolic extract and its fractions (BLTM and EATM) were found to be in the order: BLTM > EATM  > METM.

CONCLUSION: The study results indicate that Trichuriella monsoniae exhibit α-amylase and α-glucosidase inhibitory activity and this therapeutic potentiality could be exploited in the management of postprandial hyperglycemia in the treatment of type 2 diabetes mellitus.

Further, in-vivo experiments on animals are needed to confirm these findings.

CONFLICT OF INTEREST: We declare there are no conflicts of interest.