ABSTRACT: Introduction: The warfarin management programs include mainly routine INR measurement, dosing protocols, clinical management protocols for excessive anticoagulation, and patient education. There have been numerous investigations to explore the most appropriate model for outpatients, accordingly different Anticoagulation Management Programs have been emerged in practice. Aims and objectives: This study is an attempt to develop concise warfarin protocol that expands role for the community pharmacist in Iraq. Patients and methods: A prospective case-controlled carried out on patients discharged from the hospital on warfarin therapy in combination to their prescribed medications. The follow up was achieved by four visits starting from 8-10 days after hospital discharge until 90 days. patients who were allocated into Intervention group received designed warfarin management program , and control group on 'usual care' monitoring. Results: The percentage of patients with international normalized ratio (INR) levels is within therapeutic/target range in the intervention group was significantly higher than that in the control group (66.67% vs. 34.78%) after 90 days of monitoring program (p˂0.05). During 90 days of follow up, the total percentage of time therapeutic range (TTR) for the intervention group was (57.68%), and (44.92%) for the control group. Patient adherence to warfarin was (100%) in intervention group compared to control group (p˂0.05). Conclusions: The intervention group demonstrated higher percentage of patients with INR levels within therapeutic/target range, following the management program, and significant improvement in time therapeutic range (TTR) from admission to 90 days post discharge. Accordingly, many promising strategies emerged from pharmacist warfarin- management program.

INTRODUCTION: The necessity to provide more precise dosage adjustment of warfarin may be of clinical importance in respect to current recommendation for higher-intensity warfarin therapy and maintenance of acceptance INR values 1. Poor adherence was significantly associated with under anticoagulation or out-of-range INRs 2.

The interventions to improve adherence are most effective if implemented by physicians, pharmacists, nursing staffs, and behavioral specialists throughout the course of therapy 3. The warfarin management programs include mainly routine INR measurement, dosing protocols, clinical management protocols for excessive anticoagulation, and patient education 4. The key endpoint evaluated is usually the control of a patient’s INR (estimated as the time the patient’s INR is maintained within the target range) 5. There have been numerous investigations to explore the most appropriate model for anticoagulant management, accordingly different Anticoagulation Management Programs have been emerged in practice 6-9. This study is an attempt to develop concise protocol that expands role for the community pharmacist in Iraq to work closely with general practitioners in managing, monitoring and educating patients receiving anticoagulant therapy with the overall goal of improving outcomes for patients receiving warfarin.

Study design: This study is a prospective Case-controlled carried out on patients discharged from the hospital. The patients were in warfarin therapy in combination to their prescribed medications. The candidate patients received warfarin therapy according to the clinical indication by Consultant cardiologist. The ethical approval was obtained from the institution ethical committee, and a written consent was given by each patient participated in the current study.

As per study design, the follow up for all patients was achieved by four visits and interview starting from 8-10 days after hospital discharge which is considered as visit number (1).Thereafter; visits number (2,3 and 4) were programmed after 30, 60 and 90 days after hospital discharge, respectively. Each visit involves the following keynote from standard of practice:

Patients: The sample size of the present investigation involved of 50 patients who were allocated into two groups as follow:

This group is subdivided into:

Patients should be assessed for factors that influence interpretation of laboratory results and determine warfarin dosing. The INR was calculated using specific equation 20, and the time therapeutic range (TTR) was calculated using Rosendaal linear interpolation method by addition each patients time within the therapeutic range and divided by the total time of observation 21.

Several models had been implemented earlier worldwide 10-17, and to the best knowledge this is the first maneuver to assess such program on Iraqi patients.

Table (1) presented the baseline demographic data of all patients on warfarin indications enrolled with study groups.

TABLE 1: PATIENTS DEMOGRAPHICS AND DISEASE CHARACTERISTICS OF THE CONTROL AND INTERVENTION GROUPS

Data presented as number of patients (n) and percentage (%), or as mean ±SD

The allergy of drugs among control group was documented in (13%) of patients, while intervention group presented drug allergy in (14%) of patients.

Process of matching for the variables mainly (age, gender, and body mass index) between participants in the control and the intervention group showed no significant differences (p > 0.05).

TABLE  2:  THE  PERCENTAGE  OF  PATIENTS  WITH  INR  WITHIN  THE  TARGET  RANGE  FOR INTERVENTION AND CONTROL GROUPS ACCORDING TO EACH INTERVENTION VISIT

Data presented as number of patients (n) and percentage (%)

FIG. 1: THE PERCENTAGE OF PATIENTS WITH INR WITHIN THE TARGET RANGE FOR INTERVENTION AND CONTROL GROUPS ACCORDING TO EACH INTERVENTION VISIT

The current finding is supported by several previous investigations 22- 25. A very recent study conducted by Hazem et al. (2016) demonstrated that the percentage of patients with INR levels within therapeutic/target range was higher for the patients managed by clinical pharmacists intervention in comparison to the patients under doctor based advices and intervention (76.5% vs. 71.2%) respectively 22. Similar results was presented by Dib JG et al. (2014) 23 in which higher target range of INR in patients with warfarin therapy managed by clinical pharmacists intervention compared to those obeying usual conventional pharmacy practice (59% vs. 48%) respectively. Several other clinical programs reveal high percentage of target range INR in both intervention and control group as follow; (76% vs. 48%) 28, (67.2 % vs. 54.6%) 24, (82.9 % vs. 34.3%) 25 respectively clearly support the results of the present study. All evidences necessitate the collaborative role of clinical pharmacist intervention in order to achieve optimal INR levels in the patients with warfarin therapy. The total percentage of time therapeutic range (TTR) for the intervention and control groups from discharge to day 90 following warfarin therapy

TABLE 3: THE TOTAL PERCENTAGE OF TIME THERAPEUTIC RANGE (TTR) FOR THE INTERVENTION AND CONTROL GROUPS FROM DISCHARGE TO DAY 90 FOLLOWING WARFARIN THERAPY

The results of the present study matched several recent studies 22, 26. A very recent study by Hazem et al. (2016) reported a % TTR of 81.8% versus 69.8% (p< 0.05) when comparing pharmacist based anticoagulant management to doctor-based management, respectively 22. In other recent study by Entezari et al., (2016) the percentage TTR was 72.1% versus 56.7% (p<0.05) for two common models for management of warfarin therapy (pharmacist-led service versus usual medical care) respectively 26.

Applying the pharmacist-managed anticoagulation program within a family practice clinic achieved better INR control with TTR over 60% for pharmaceutical care 27. Many other studies explore significant differences between pharmacist intervention and the usual care in warfarin management therapy (73.7% versus 61.3%) (p<0.05) 24 and (62.7% vs. 53.9%), (p<0.05) respectively 28. According to all these findings from the present study and the previous literature, it can be said that the clinical pharmacist intervention play a vital role to elevate the percent TTR in the patient and consequently achieve optimal warfarin therapy via maintaining higher actual TTR.

Warfarin monitoring for intervention and control groups following warfarin therapy: Table 4 presented the details of warfarin monitoring during the intervention visits. These include bleeding events, total number of drugs prescribed, number of interacting drugs with warfarin, daily dosing of warfarin, change in warfarin dose, mean INR measurement, the classification of INR level and patient adherence and instructions to warfarin therapy.

Data presented as number of patients (n) and percentage (%), or as mean ±SD

Additionally, the major bleeding events in pharmacist-led service model for management of warfarin therapy were (0.6% vs. 1.7%) for the usual medical care compared to management model 26. Bleeding frequency due to warfarin has been estimated to occur (15%-20%) per year, and the life threatening or fatal bleeding, the rates was estimated to be (1%-3%) per year 29.

The mean numbers of drugs used by patients in the control group overall the intervention visits were (3.3±2.36), Whereas, the mean number of drugs used in the intervention group were higher compared to control patients was as follow: (4.92±2.99), (5.14±3.13), (4.88±2.83), and (4.63±2.81) respectively. The total mean of the drug used by intervention group patients throughout all visits was (4.89±2.94) and for control group (3.3±2.36) with statistical significant difference between them (p=0.042). As mentioned earlier, several drugs significantly interact with warfarin by different mode. In the present study, the control group showed similar mean of interacting drugs throughout all visits (0.87±1.14), whereas mean drug interaction in interventional group varies from visit to another with total mean of (1.42±1.47). This is due to large number of drugs used by patients in the intervention group that interact with warfarin compared to control group. However, the result was non-significant (p>0.05). Castro et al. in his study mentioned that major of drug interactions with warfarin are very common in inpatients resulting in INR outside the The range and he concluded through pharmaceutical interventions providing more information to clinician and can improve the patient safety 30. 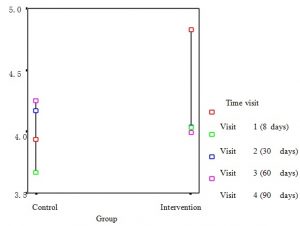 FIG.  2:  MEAN  DAILY  DOSE  OF  WARFARIN  THERAPY  (MG)  IN  THE  CONTROL  AND INTERVENTION GROUPS ACCORDING TO EACH VISIT

There is wide inter-individual variation in the requirement of warfarin dosing to raise the INR to a therapeutic level. The mean dose is approximately 4.3 mg and the range is (0.5-15) mg/day 31. Changing warfarin dose was scheduled in each visit to reach target level and avoid warfarin complications. Changing dose of warfarin in the intervention group was more frequent than that in control group (54.62% vs. 52.17%), but still the

difference was not statistically significant (p>0.05). INR levels were recorded throughout the study visits after each change in warfarin dose in both study groups. The total mean of INR measured during all visits was higher among intervention group compared to control group (2.75 vs. 2.56); however, the result was not significant. The mean INR levels are illustrated in Fig. 3 for both study groups. 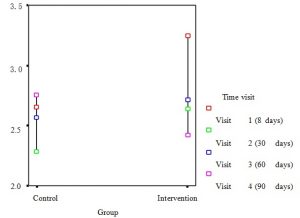 FIG. 3: MEAN INR LEVELS IN CONTROL AND INTERVENTION GROUPS ACCORDING TO EACH VISIT 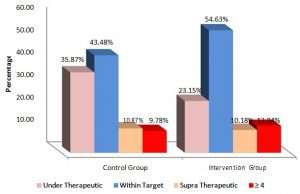 FIG. 4: INR EVALUATION IN THE CONTROL AND INTERVENTION GROUPS IN ALL VISITS

Previous study explore that the involvement of clinical pharmacist in the anticoagulation management improved the therapeutic outcome of patients by decreasing the percentage of sub- and supra-therapeutic from (28.4% and 18.4%) to (18.5% and 8.45%), respectively. Whereas, the percentage within therapeutic target range was elevated from (53.2% to 73.45%) 32. Moreover warfarin management program by clinical pharmacist supply effective and safe services for patients in which it produced significantly better anticoagulation control by reducing total bleeding and warfarin related emergency accidents. Besides, it effectively reduced over anticoagulant without increasing under anticoagulant and improved outpatient and inpatient warfarin therapeutic outcomes 33-39.

From the present intervention and previous studies, it can be said that increasing patient education, improving dosing schedules, and developing greater communication are potential ways to maximize patient adherence.

CONCLUSION: In the present study many promising monitoring strategies emerged from the available results that can be supplied by clinical pharmacist via warfarin management program for inpatients and outpatients services. The intervention group demonstrated higher percentage of patients with INR levels within therapeutic/ target range, and significant improvement in time therapeutic range (TTR) from admission to 90 days post discharge. There was significant improvement in patients' laboratory parameters following the 90 days warfarin management. Accordingly, many promising strategies emerged from pharmacist warfarin- management program.

CONFLICT OF INTEREST: The authors assure that there is NO conflict of interest throughout this work.