Categories Menu
Home » EVALUATION OF ADVERSE EFFECTS DUE TO ANTIDIABETIC AND CARDIOVASCULAR DRUGS IN A TERTIARY CARE HOSPITAL IN KOLKATA, WEST BENGAL, INDIA

EVALUATION OF ADVERSE EFFECTS DUE TO ANTIDIABETIC AND CARDIOVASCULAR DRUGS IN A TERTIARY CARE HOSPITAL IN KOLKATA, WEST BENGAL, INDIA

EVALUATION OF ADVERSE EFFECTS DUE TO ANTIDIABETIC AND CARDIOVASCULAR DRUGS IN A TERTIARY CARE HOSPITAL IN KOLKATA, WEST BENGAL, INDIA

ABSTRACT: Purpose: Diabetes mellitus is a significant burden to the present society, associated with various co-morbid conditions like hypertension, cardiovascular diseases, etc.  A number of drugs are available to handle these health problems successfully. However, therapeutic success of such diseases is limited due to adverse effects of drugs or medicines. The aim of the present study was to evaluate the cases of adverse events due to these medications. Methods: An observational study on patients attending the Out Patient Department (OPD) of R.G. Kar Medical College, Kolkata, West Bengal, India, for a period of 8 months (September 2014- April 2015). Adverse drug events due to the use of anti-diabetic and cardiovascular drugs were collected and evaluated. Result: Present study revealed that, out of the total 48 adverse event reports collected in patients using anti-diabetic and cardiovascular drugs, 66.7% may be due to anti-diabetic drugs and 31.25% may be due to cardiovascular drugs. The prevalence of adverse effects due to antidiabetics was more in female (62.5%) as compared to male (37.5%). 40.63% of the patients suffering from adverse effects predicted due to antidiabetics, were in the age group of 36-45 years. Metformin was the most common antidiabetic drug, may be responsible for 87.5% of the adverse events. Antihypertensives may be associated with 93.33% of the cases of adverse effects in cardiovascular disease, causing mostly gastrointestinal problems. Conclusion: It may be concluded that it is essential to investigate the adverse effects of these drugs, to identify the causative agent, to ensure safe therapy.

INTRODUCTION: Diabetes Mellitus (DM) is a disease of improper metabolism of carbohydrates, proteins, lipids, due to lack of insulin hormone or insensitivity of cells to insulin, causing increased blood sugar level 1.

A study performed with different countries across the world revealed 382 million people affected with DM in 2013 and this number is expected to increase to 592 million by 2035 2 . Among all the continents, 60% of the diabetic population is contributed by Asia, mainly India and China 3, 4.  Diabetes is associated with various co-morbid conditions like hypertension and cardiovascular diseases.

To combat these complicated medical conditions often physicians are compelled to prescribe a dozen of drugs or medicines to the patients. However, apart from beneficial effects, drugs are found to have various adverse effects on the health. Adverse drug event (ADE) is defined to be “any untoward medical occurrence that may present during treatment with a medicine, but which does not necessarily have a causal relationship with the treatment” 8. Adverse drug events (ADE) associated with the use of multiple drugs are not an uncommon phenomenon in therapeutics. These negative consequences of drugs are therefore major drawbacks. Research in European countries illustrated that adverse effects of drugs is responsible for 5% of the hospitalized incidents and 197,000 deaths annually 9.

Various factors contribute to the adverse effects of drugs, like type of the disease, age and gender of the patient, lifestyle, race, genetics, even polypharmacy (i.e., use of multiple medications by a single patient), etc. Thus detection and assessment of these adverse effects gained importance for safer therapeutics. Pharmacovigilance is an approach to ensure safe use of medicines. It is the pharmacological science relating to the collection, detection, assessment, monitoring and prevention of adverse effects of pharmaceutical products. It identifies the risk associated with a marketed drug and minimizes the chance of ill effects 10.  Present study aim to evaluate the prevalence of adverse drug events associated with antidiabetic drugs and cardiovascular drugs in a Tertiary Care hospital, in Kolkata, India.

This was an observational study conducted on the reports collected from patients, attending different outdoor departments of R.G. Kar Medical College, Kolkata, West Bengal, India. Prior permission was obtained from Institutional Ethics Committee (IEC). Study duration was 8 months, from September 2014-April 2015. Patients of both sexes and all ages who suffered from Adverse Drug Events (ADE) due to antidiabetics and/or cardiovascular drugs were included in the study.

During the 8 months of study, a total of 466 cases indicating adverse drug events were reported at the Adverse Drug Reaction (ADR) Monitoring Centre of R.G. Kar Medical College, Kolkata, West Bengal, India. Out of these, 48 reports based on adverse events due to antidiabetics and cardiovascular drugs were selectively screened and evaluated. Detailed study revealed, majority (32, 66.7%) of these events were attributed to antidiabetic drugs (Table 1).

TABLE 1: DISTRIBUTION OF ADVERSE DRUG EVENTS (ADE) DUE TO ANTIDIABETICS, CARDIOVASCULAR OR BOTH IN STUDY POPULATION

Age is one of the factors that determine the effect of drug on an individual. The age of the study population ranged from 25 years to 75 years, with mean 43.2 years. It was observed that most of the adverse events were prevalent among the elderly age groups. Among the 32 patients complaining of ADE due to antidiabetics, 40.63% (13) belong to the age group 36-45 years. However, out of the 15 reports on adverse effects due to cardiovascular drugs, 40% (6) of the reported cases included patients within age group 56-65 years. 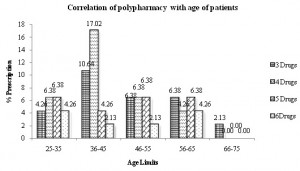 FIG. 1: CORRELATION OF POLYPHARMACY WITH AGE OF PATIENTS IN THE STUDY POPULATION

A single patient suffering from multiple disorders is a common observation in the world of medicine, recently. 20.83% (10) of the reported cases documented comorbid conditions of diabetes and hypertension. Average number of drugs prescribed per prescription for these 48 reports was 4.2. With the aim to find the correlation between polypharmacy and the age of the patients, the numbers of drugs used per prescription were classified based on the age groups (Fig. 1). Interestingly, it was observed that the use of 5 or 6 drug combinations in a single prescription was mostly prevalent among the older age group of 46-65 years.

The drug prescription pattern was evaluated on the 32 reports collected on ADE due to anti-diabetic drugs. Several prescriptions contained a combination of anti-diabetic drugs. In 40.6% cases, a combination of two antidiabetic drugs was prescribed. Biguanide or Metformin was the most commonly prescribed (31, 96.9%) antidiabetic drugs, followed by Sulfonylureas (29, 90.4%)   (Table 2). Biguanide (Metformin) was responsible for 87.5% (28) of the ADEs reported, whereas, Sulfonylureas accounted for 15.63% (5) of the cases. Among the cardiovascular drugs, antihypertensives were the most commonly prescribed (93.33%) and were responsible for 60% of the ADR (Table 2). Among the antihypertensives, Calcium channel blocker, amlodipine, accounted for 55.6% of the prescriptions.

Complains of ADE observed in these reports were classified according to MedDRA system 12. MedDRA (the Medical Dictionary for Regulatory Activities Terminology) is the vocabulary used as medical coding scheme in pharmaceutical companies or for reporting adverse events. It deals with the symptoms, therapeutic indications, the method and result of investigations and the medical history of the patients 12.  In the present study, most common symptom for adverse effects due to antidiabetics was musculoskeletal disorder (16, 50%) i.e., joint and muscle pain. However, in case of cardiovascular drugs, the most prevalent symptom reported was gastrointestinal disorder (6, 40%).

DISCUSSION: Objective of the study was to document the adverse events due to the use of antidiabetics and cardiovascular drugs. This study was conducted on patients attending different outdoor departments of R.G. Kar Medical College, Kolkata. ADE reports were collected over a period of 8 months. About 10.3% (48) of the total 466 reports documented on adverse drug events were associated with antidiabetics and cardiovascular drugs. Out of these 48 cases reported, 66.7% (32) may be associated with antidiabetic drugs, 31.25% (15) for cardiovascular drugs and 2.08% (1) may be due to both these groups of drugs. The incidence of ADE due to antidiabetics was almost half among the male (37.5%) as compared to the female (62.5%).  A study on adverse drug reaction (ADR) conducted at the same tertiary care hospital on 2013 observed comparable results, 29.87% male patients whereas 70.12% female patients 13. However, in case of adverse events due to cardiovascular drugs, prevalence was observed in male (60%) as compared to female (40%). Similar observation was reported in a study in India (69.5% male, 30.5% female) 14. However, a study on ADR due to antihypertensives conducted in Australia and Germany, found 47% were female and 53% male, which were almost similar with the present study15.

Average number of drugs per prescription was 4.2 in present study that were much higher as compared to other studies in India, reporting an average of 2.27 drugs per prescription 16. In this present study a combination of two antidiabetics were mostly (40.625%) prescribed. The combination of biguanide and sulfonylureas was prescribed in 32.26% of the cases, which is similar to an observation among indoor patients of a tertiary care hospital at South India 17. Use of multiple drugs, i.e., polypharmacy is a common practice among the elderly patients. This study also reported prescriptions containing 5 or 6 drugs, which was more prevalent among elder patient of age group 46-65 years. Therefore this indicates that more drugs were prescribed to the elderly patients, thereby complicating the therapeutic regimen and increasing the chance of adverse events. Literature also supports the fact that polypharmacy is a regular practice among the elderly patients in different countries including  Indonesia (average 4), Ghana (average 4.5), Pakistan (average 4.51), Nepal (average 2.5), US (average 5) 22-24.

CONCLUSION: The prevalence of Diabetes and various comorbid conditions is a frequent observation that compels the clinicians to prescribe multiple drugs. Use of multiple drugs enhances the chance of adverse reactions. Various other factors like age, gender, lifestyle of the patients are also responsible for the development of adverse reactions. These adverse consequences are therefore a limitation for the therapeutic success. Thus, it becomes essential to identify the responsible drugs to avoid adverse effects to ensure safe and efficient therapeutics. Detection and prevention of these adverse reactions is essential to reduce patient suffering. Future studies on adverse drug events will help the therapy and ensure the use of safe medicine.