ABSTRACT:Plant products served as an alternative to synthetic products because of local accessibility, eco friendly nature and lower prices. Natural gums and mucilages are widely explored as pharmaceutical excipients. The present study was undertaken to separate mucilage from unripe fruits of Aegle marmelos (L) Corr. and explore its use as binder in tablets. The binding properties at different concentrations of mucilage were evaluated using Paracetamol as model drug. Mucilage at 3%w/w was found to be comparable with 10%w/w of starch paste. The drug release studies indicated that Aegle marmelos mucilage could be considered as a potential binding agent.

INTRODUCTION: Mucilages are polysaccharide macro molecules that dissolve more or less upon contact with water and form colloidal solutions 1. Mucilages are widely used in pharmaceutical industries as thickeners, water retention agents, suspending agents, binders and film formers 2. Apart from its use in finished medicines, newer uses have been found in the preparation of cosmetics, textiles and paint paper 3. Vast application of plant mucilages and gums in various industries is because of low cost, ready availability and important properties which they confer on products. So screening of gums and mucilages has become a vital pharmaceutical interest 4, 5. The objective of present work was to isolate mucilage from the unripe fruit of Aegle marmelos (L) Corr. and explore its use as a binder in tablets.

Mucilage when subjected to acute oral toxicity studies in rats according to OECD guidelines (no.423) showed a median lethal dose (LD50) greater than 2000 mg/kg, p.o. Permission from Animal Ethics Committee was obtained for the studies done. The mucilage was also subjected to physicochemical characterization for solubility, swelling index, loss on drying, ash value, pH, viscosity, microbial load, density, compressibility index and angle of repose 6. The evaluation was carried as per the procedures described in Indian Pharmacopeia 1996 7.

Paracetamol was used as model drug to formulate granules withlactose as diluents and starch as disintegrant. Three batches of paracetamol granules were prepared using Aegle marmelos mucilage (3, 4, 5 % w/w) labeled as A1, A2 and A3 respectively. Granules formulated with 10%w/w starch paste as binder labeled as A4 was used for comparison (Table 1).  The granules prepared by standard moist granulation method were compressed on a single stroke tablet machine using talc and magnesium stearate as anti-adherent and lubricant respectively8. Granule properties (percentage of fines, tapped density, bulk density, Hausner’s ratio, compressibility index) and tablet properties (hardness, weight variation) were determined by standard procedure 8.

Paracetamol was assayed spectrophotometrically as described in Indian Pharmacopeia (1996). The in vitro release profiles of paracetamol from the tablets were also obtained in two medias; 0.1M hydrochloric acid and phosphate buffer (7.8) using dissolution test apparatus (electro lab, Mumbai, India) at 37oC and 50 rpm

Table 2 compares the binding properties of paracetamol tablets made with different concentrations of mucilage and starch paste. It was observed that percentage of fines decreased as concentration of binder increased. The compressibility index (Carr’ index) between 5-15 % indicated that granules had excellent flowability with good bridge strength and stability.

In Table 3, which compares the tablet properties of paracetamol, A1 formulation containing 3%w/w of mucilage showed slightly higher friability but was superior in terms of disintegration time and assay. 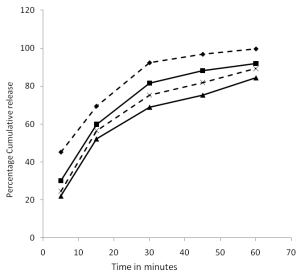 FIGURE 1: COMPARISON OF DISSOLUTION OF PARACETAMOL TABLETS PREPARED WITH STARCH AND AM MUCILAGE IN 0.1 M HCl 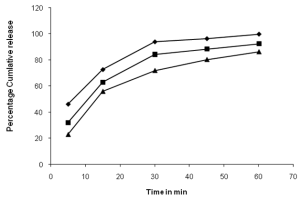 FIGURE 2: COMPARISON OF DISSOLUTION OF PARACETAMOL TABLETS PREPARED WITH STARCH AND AM MUCILAGE IN PHOSPHATE BUFFER (pH 7.8)

Where, Rt and Tt are the cumulative percentage dissolved at each of the selected n time points of the reference and test product respectively. When the dissolution profiles, in hydrochloric acid media of formulations A1, A2 and A3 were compared with A4 standard formulation, the similarity profile f2 was 26.14, 52.15 and 55.91 respectively. According to FDA f2 value between 50-100 indicates similarity between two dissolution profiles. Thus it may be said that A1 formulation was better than A4, whereas A2 and A3 were similar to A4.
In conclusion we can say that, tablets containing Aegle marmelos mucilage at concentration of 3% w/w can be used as binding agent for preparation of conventional tablet as the hardness, disintegration time, drug content and dissolution profile were as per the prescribed limits of Indian pharmacopeia when Paracetamol was used as model drug.