INTRODUCTION: Pain is an unpleasant sensation but a protective mechanism of our body. The term pain is taken from the Latin word peona, which means punishment 1. International Association for the Study of Pain (IASP) defined pain as “An unpleasant sensory and emotional experience associated with actual or potential tissue damage or described in terms of such damage 2. As pain is always a psychological state (perception instead of a sensation).

IASP in 2019 suggested changing the definition as an aversive sensory and emotional experience typically caused by or resembling that caused by, actual or potential tissue injury 3. Pain perception is a normal physiologic response transduction perception mediated and transmission modulation by a healthy nervous system.

The pain-sensing neurons “nociceptors” as C-fibers and A-delta are thin fibre-like afferent neurons located in visceral tissues, skin and muscle, and joints responsible for noxious, chemical, mechanical, or thermal stimuli 4. Based on the duration of pain, it can be ‘Acute pain (caused by soft tissue damage, infection or inflammation and will be short of duration) or Chronic pain’(which lasts for 6 months or larger than that period, e.g., cancer pain, neuropathic pain and arthritic pain).

Pain is one of the main disabling accompaniments of various medical conditions. Thus, having pain control is one of the essential therapeutic priorities. Pain management is currently done using either opioids (narcotics) or nonopioids (Non-narcotics). These drugs are classified under the category of “Analgesics”. Analgesics are defined as the substances that decrease pain sensation by increasing the pain threshold to external stimuli without altering consciousness 5. The difference between these two types of analgesic medications is shown in Table 1.

Analgesic drugs used at present for anti-inflammatory and analgesic effects are synthetic in nature and prolonged use of which causes severe side effects like hepatotoxicity, NSAID-induced gastrointestinal toxicity, and increased risk of falls, fractures, or delirium 6.

Research to determine other alternatives for the treatment of pain is essential. Various medicinal herbs have been used for centuries for therapeutic purposes. Plants are still an untapped resource of structurally novel molecules that can help develop novel drugs. Even with recent developments in various pain therapies, the medicinal community still requires safe, effective, and potent analgesic drugs to treat various painful conditions. The family of Capparaceae consists of several essential medicinal characteristics found to be distributed in the tropical and subtropical parts of India. Plants of this family were characterized as "Rasayana herbs" and are used widely as an adaptogen to boost non-specific antioxidant resistance and immunostimulation effects. One of the main plants from the Capparaceae family is Capparis moonii Wight, which is a woody climber inherent to India and Sri Lanka. It is commonly known as “Large Caper”, as it is the biggest of all caper flowers 7. Commonly it is known as “Rudanti” in Sanskrit and “Waghati” in Marathi. In India, it is most commonly found in the Konkan region and cultivates in hot semi-arid conditions. The taxonomical Hierarchy of the plant is given in Table 2.

Morphologically, it is a large woody climber or shrub with a height of 3-5 m. It has recurved thorns and trailing glabrous branches with thick stems. Leaves of this shrub are 7-10 cm long, either obtuse or subacute with the callous tip, smooth above and pale beneath. Flowers are white and fragrant with 10-12 cm across, forms corymbs at the end of the branches. Abundant white stamens are 5-8 cm long and are prominent on the flower. The fruits are round, 5-10 cm in diameter across green-grey to red in colour. 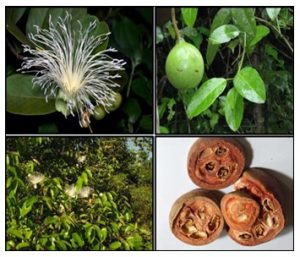 Rudanti in Ayurveda nourishes each and every cell of the body (Rasayani). It is beneficial in undernutrition and emaciated conditions (Shoshghani). It delays the signs of aging (Jara Vinashnam) and is also advantageous in diseases that have devastating effects on all the systems of the body (Rajyakshma Shasyate). Rudanti has also been widely used to get relief from cough and asthma by the people of India. Physical, chemical, and physiological factors may lead to gastric ulceration in humans. Reactive oxygen species (ROS) are reported in the pathophysiology of human diseases, for instance, neurodegenerative inflammation, viral infections, autoimmune GI inflammation, and gastric ulcer. It has multiple known activities such as CNS depressant activity 8, anti-bacterial activity 9, insulin-mimetic activity 10, anti-hepatotoxicity 11, immunomodulatory activity 7, 12, antioxidant activity 13, and antiulcer activity 14. Keeping this view in mind, we have planned to undertake complete ethnopharmacological research to identify herbal medicine for comparatively less explored natural regimens in pain management. For this purpose, a thorough literature survey was done to determine the best fit model for the evaluation of the analgesic activity of Capparis moonii. Hot-plate test 15 and Acetic acid-induced writhing test 16 models were decided to be utilized for screening purposes. The hot plate test is widely used in basic pain research as well as in testing the efficacy of the analgesics by observing the response to pain caused by heat.

Collection and Authentication of Plant: Fruits of Capparis moonii were purchased from a local supplier and authenticated by Dr. Bindu Gopalkrishnan, Assistant Professor of Botany, University of Mumbai.

The fruits were washed with tap water and dried at normal room temperature with the aid of circulating air flow using fan. Then fruits were chopped into smaller portions for drying, and then, powdered mechanically sieved using (#20) and were used for extraction.

The solvent dissolves the powder's soluble constituents and changes colour. The siphon tube drained the compartment, with the solvent flowing back into the bottom round flask. This loop was replicated until the powder was consumed, which was detected when the liquid in the siphon tube was clear. Next, in the petri plates, all the contents of the round bottom flask were drained, and the solvent was allowed to dry up. After the extracts had been evaporated to get the dried crude form, they were then placed in an appropriate container and stored in a refrigerator at 4° C till the time for their use. The alcoholic extract percentage yield was 7.88% w/w. The entire study was then done on the basis of alcoholic extract of Capparis moonii W.

Animals: 30 male Swiss Albino Mice weighing (15-30 g) were used for the study. The animals were obtained from Bharat Serums and Vaccines Limited, Thane West, Maharashtra 400604. The use of these animals and the study protocols were approved by CPCSEA recognized local ethical committee of Oriental College of Pharmacy under protocol no. OCP/IAEC/2019-20/03 titled “To evaluate Analgesic Activity of Ethanolic Extract of dried fruits of Capparis moonii Wight. (EECM) in Swiss Albino Mice.” Mice were kept at the animal house of Oriental College of Pharmacy, Sanpada, Navi Mumbai; in polypropylene cages, at 22 ± 2 °C, with 12:12 h dark: light cycle. They were provided with commercial rat feed and water given ad libitum.

Selection of Doses: The alcoholic extract’s LD50 was estimated to be 2000 mg/kg. This plant has also known to be edible making it safe and accordingly 1/10th and 1/20th dose were selected for study i.e. low dose 100 mg/kg and high dose 200 mg/kg for the test groups with dose conversion 19, 20.

Eddy's Hot Plate Method 15, 21: The animals were divided into five groups (six animals in each group) for antipyretic studies.

Procedure: The mice were placed on a hot plate maintained at 55 °C within the restrainer. The reaction time (in seconds) or latency period was determined as the time for the rats to react to thermal pain by licking their paws or jumping.

The maximum reaction time was fixed at 45 sec to prevent any injury to the tissues of the paws. If the reading exceeds 45 sec, it would be considered as maximum analgesia.

The % maximum possible analgesia (MPA) was calculated as follows:

Acetic acid-induced Writhing Method 16: For antipyretic studies, the animals were divided into five (six animals in each group).

Procedure: After 30 minutes of drug administration, 0.1 ml of 1% acetic acid solution was given to mice intraperitoneally (i.p.). The mice were placed individually into glass beakers, and five minutes were allowed to elapse. The mice were then observed for a period of 30 minutes and the numbers of writhes were recorded for each animal. For scoring purposes, writhe was indicated by stretching of the abdomen with simultaneous stretching of at least one hind limb.

The following formula was used to calculate percentage inhibition:

Statistical Analysis: The data were analyzed with In-Stat Software by GraphPad (version 3.10). The results are expressed as the mean ± SEM for each group. Statistical differences were evaluated using a one-way analysis of variance (ANOVA) followed by Dunnett’s t-test.

Physicochemical Analysis of Crude Powder: The result of this study is mentioned in Table 4.

Qualitative Phytochemical Screening: The result of this study is mentioned in Table 5.

TLC Profiling: The result of this study is mentioned in Table 6.

Acute oral Toxicity Studies: The result of this study is mentioned in Table 7.

Eddy's Hot Plate Method: All three test groups of the Ethanolic extract of Capparis moonii showed dose-dependent increase in % MPA when compared against control as well as against Pentazocine, which was used as a standard. Results of this study are mentioned in Table 8 and Fig. 2.

Acetic Acid-Induced Writhing Method: All three test groups of the Ethanolic extract of Capparis moonii showed a dose-dependent decrease in % inhibition when compared against control as well as against Pentazocine, which was used as a standard. Results of this study are mentioned in Table 9 and Fig. 3. 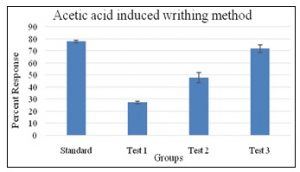 DISCUSSION AND CONCLUSION: Clinical conditions such as arthritis, cancer, and vascular diseases are associated with pain and inflammation 22. Neurologic pain is a widely used model for hot plate tests. In this method, phasic stimuli of high intensity are given 23. Pain induced by the thermal stimulus through their action at the spinal cord level of the hot plate is specific for centrally mediated activity. Opioid agents (pentozocine) used as the standard in this study acts through binding with opioid receptors (μ, δ, and κ) present in presynaptic and postsynaptic membranes. Opioid agents (pentozocine) exert their analgesic action via supraspinal (μ1, κ3, σ2, δ1) and spinal (μ2, κ1, δ2) receptors 24. The antinociceptive activity was observed by EECM via increasing the potential discomfort in the hot plate test. This action could be by stimulating the periaqueductal gray matter to release endogenous peptides 25. These endogenous peptides incline the spinal cord and function as inhibitors of pain impulse transmission at the synapse in the dorsal horn 26, 27. The possible mechanism of EECM fruits could be due to its action on the central opioid receptors or promoted release of endogenous opioid peptides 28. The present study thus demonstrates the potential antinociceptive effect of EECM by thermal (Eddy’s hot plate method) models of nociception, thus hypothesizing that EECM possesses both central and peripheral nociceptive actions. The abdominal contraction method has been used to evaluate peripherally acting analgesics by inducing acetic acid. In this method, pain is generated indirectly via endogenous mediators like prostaglandin, which stimulates peripheral nociceptive neurons. These neuronal fibers are sensitive to both narcotics and non-steroidal anti-inflammatory drugs 29, 30.

The acetic acid-induced writhing has been associated with an elevated level of PGE2 and PGF2α in peritoneal fluids as well as lipoxygenase products 31. The increase in prostaglandin levels within the peritoneal cavity then enhances inflammatory pain by increasing capillary permeability. The plant extract exhibited positive results for alkaloids, and it is well-known that many alkaloids, including caffeine, cocaine, cathinone, nicotine, and yohimbine, possess central stimulant effects 32. Therefore, the identified polyphenols and alkaloids might contribute to the observed central stimulant effect of EECM.

ACKNOWLEDGEMENT: We, the authors, are pleasured to thank the Management of Oriental College of Pharmacy, Sanpada, Navi Mumbai 400705, and our Principal Dr. (Mrs.) Sudha Rathod.

CONFLICTS OF INTEREST: There are no conflicts of interest among any of the authors of this paper.