INTRODUCTION: Tamarindus indica Linn. belonging to Caesalpinaceae subfamily of Fabaceae family. The tree is a long-lived, large, evergreen or semi-evergreen tree, 20-30 m tall with a thick trunk up to 1.5-2 m across and up to 8 m in circumference.

The trunk forks at about 1 m above ground and is often multi-stemmed with branches widely spreading, drooping at the ends and often crooked but forming a spreading, rounded crown. The bark is brownish-gray, rough, and scaly.

Young twigs are slender and puberulent. A dark red gum exudes from the trunk and branches when they are damaged 1. India is a major producer and consumer of Tamarind in the world 2.

Along with culinary usage, there is a vast medicinal utility of T. indica L. described which are enumerated in different Ayurvedic classics. Besides fruit being an important part, Thai traditional medicine recognizes Tamarindus indica fruit as digestive, carminative, laxative, expectorant and blood tonic 3. Many other properties have been also reported like Hypolipemic and antioxidant 4, anti-inflammatory 5, antimicrobial 6, cytotoxic 7, against gastrointestinal spasms 8, and modifying the complement system 9.

Pain is an unpleasant feeling often associated with tissue damage. Tissue injury is the immediate cause of pain as it releases different chemical mediators like prostaglandins, bradykinins, substance P which act on the nociceptors causing this sensation. The nociceptive stimulus is transmitted to the CNS by small myelinated Aδ- fibres or by unmyelinated thin C-fibres 10. It is often classified as chronic and acute. Acute pain may be characterized by its quick onset and short duration, lasting for hours. On the other hand, chronic pain is often associated with persistent pain over a large period of time 11, 12.

An extensive search of the literature reveals no reports on the analgesic activity of the plant on leaves Thus, the tamarind leaves, present investigation was planned to.

Plant material & method: The leaves of the Tamarindus indica Linn. were collected from Jhansi. The leaves were dried in shade. The leaves were authenticated by Dr. Neelima Sharma (Research Investigation Officer), (Reference No. 5714) from National Botanical Research Institute, Lucknow (U.P.), India. After authentication, fresh plant material was collected in bulk, washed under running tap water to remove adhering material, dried under shade and pulverized in a mechanical grinder. The coarse powder was passing through sieve no. 40 and taken for further studies.

Preparation of Extract: For the preparation of extract 100gm of dried coarse powdered leaves were charged in to the Soxhlet’s apparatus (hot extraction) and extracted successively with ethanol at temperature at 60°-80°C to defate it. Extracted with ethanol (95%) at 60°-80°C.The success of the extraction with ethanol is directly related to the extent that chlorophyll is removed into the solvent.

The successive methanolic extract (deep brown colour) was filtered & dried under reduced pressure to get a solid mass free from the solvent. The yield was 7.2% with respect to dry starting material with characteristic odour & greasy consistency. The dried extract was dissolved in distilled water and & using 1% tween 80 as a suspending agent for the evaluation of analgesic activity.

Animals selection: Healthy albino mice weighing about (20-25gm) of either sex was housed under the uniform laboratory condition fed with commercial diet & provided with H2O & ad-libitum, during the experiment. All protocols of the study was approved by the Institutional Animal Ethical Committee with reference no. BU/Pharm/IAEC/11/021.The IAEC is approved by Committee for the Purpose of Control and Supervision of Experiments on Animals (CPCSEA) with registration no. 716/02/a/CPCSEA.

Acute toxicity studies: Swiss Albino Mice (20-25gm) of either sex (n=10) were used for the toxicity study done in accordance to the guidelines given by OECD 15, 16. This study showed no mortality up to a dose of 25gm/kg. for 24hrs period. Based on this result, the effective dose was fixed at 200mg/kg, 400mg/kg body weight for performing the analgesic study. No adverse effects of the extract were noted during this study.

Drugs and Chemicals: All the chemicals were analytical grade. Diclofenac sodium sample was from Akums Pharmaceuticals Ltd. Haridwar Uttarakhand.

Tail immersion method in mice: The tail immersion method was used to evaluate the central mechanism of analgesic activity. Here the painful reactions in animals were produced by thermal stimulus that is by dipping the tip of the tail in hot water 17.

The animals were divided into four groups of 6 animals each and all groups received doses. The extract at the doses of 200 and 400 mg/kg body weight and vehicle (1% Tween 80 in water) were administered orally to test groups and control group respectively. Diclofenac-Na (25mg/kg i.p.) was used standard drug. According to the procedure, 1 to 2 cm of the tail of mice was immersed in warm water kept constant at 55°C (table 1).

The reaction time was the time taken by the mice to deflect their tails. The first reading was discarded and the reaction time was recorded as a mean of the next four readings. A latency period of 12s was defined as complete analgesia and the measurement was then stopped to avoid injury to mice. The latent period of the tail response was determined at 0, 30, 60, 90 and 120 min after the administration of drugs.

TABLE 1: EFFECTS OF THE ETHANOLIC EXTRACT OF T. INDICA LEAVES ON MICE IN TAIL IMMERSION TEST

n= 6, Valus are expressed as Mean±SEM P< 0.05 when compared with control group. Statistical Analysis - The mean value ± SEM was calculated for each parameter. The results were analyzed statistically by ANOVA is followed by Dunnet‟s test. The minimum level of significant was fixed at p < 0.01. The results of experiments by proper statistical analysis are tabulated in table 1. 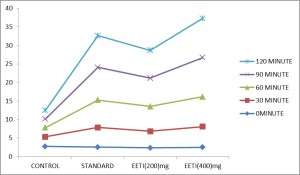 RESULTS AND DISCUSSION: In tail immersion method, the crude extract produced elongation of time 30 minutes after oral dose of 200 and 400 mg/kg body weight respectively. 400 mg dose of Ethanolic extract of Tamarindus indica show analgesic activity comparable to 25mg Standard drug (Diclofenac sodium). 400mg Ethanolic extract of Tamarindus indica shows better result in comparable to standard drug. The activity showed by this extract is of considerable importance and justified its use in pain as suggested in the folklore medicines.

By employing one way ANOVA, all data were found to statistical significant at 5 % level of significance (p<0.05). Analgesic effect against thermal noxious stimuli may be elicited through opoid receptors or through modulation of several neurotransmitters involved in relevant phenomena. Plant extract showed better activity which justifies its activity. This can be clearly analysed by the graphical representation given in graph 1. It could be concluded that the plant T. indica is having analgesic activity and better result are obtaining from extract of ethanol.

This further study needed to identify the chemical constituents present in extract of this herb that may elicit analgesic activity.

ACKNOWLEDGEMENT: Authors wish to thanks institute of Pharmacy bundelkhand university authority good cooperation during carrying out this research work and also thanks to teaching staff for giving valuable information about the plant.